Charlize Theron covers the December issue of Vogue, posing on a rocky, rather cold-looking beach for Annie Leibovitz. In the accompanying article, she swears a lot (although her purported ‘F-bombs’ are rarely quoted) and talks about stuffing her bra, both in real life as well as in her forthcoming film Young Adult, directed by Jason Reitman.

She added hair extensions and stuffed silicone cutlets into Mavis’s bra — the latter a detail she lifted from a romantic episode in her own life. “I was on this date and started making out, and it was moving a little further, so I realized I had to get the cutlets out,” Theron recalls. “But my bag was small, and I couldn’t fit them in the thing. Jason [Reitman] was like, ‘No way. That doesn’t happen!’ But that stuff happens to girls all the time.”

Whatever happened to the cutlets?

Theron pauses. “I may have hid them in his trash with lots of toilet paper.”

In other news, she’s single now! 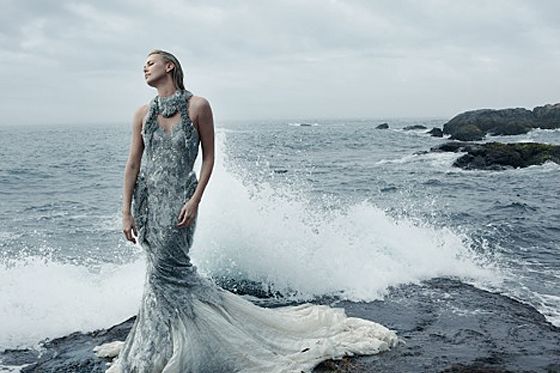 your next move 4 mins ago
‘I Left a Toxic Company. Should I Warn Other Employees?’ As much as you may want to grab a sign and protest in front of HQ, this isn’t your fight.
politics 12:22 p.m.
Herschel Walker’s Son Thinks His Dad Deserved to Lose In a string of tweets, Christian Walker excoriated not only his dad but also the Republican Establishment.
2022 fashion year in review 10:00 a.m.
Celeb-Backed Products Got Wild This Year Would you buy a $2,000 cashmere shirt from Brad Pitt? How about an antimicrobial sponge from Eva Mendes?
breakout 9:34 a.m.
Madelyn Cline Wants to Prove You Wrong Like her Glass Onion character, Madelyn Cline is determined to prove there’s more to her than meets the eye.
By Hannah Jackson
crime 8:35 a.m.
An Ex-Cop Allegedly Catfished a Teen and Killed Her Family The former Virginia trooper was killed in a shootout with authorities in late November.
celebrity 8:35 a.m.
Nia Long and Ime Udoka Are No Longer Together News of the breakup comes three months after the Celtics suspended Udoka over an alleged affair with a staffer.
culture Yesterday at 5:36 p.m.
What to Know About the Megan Thee Stallion Shooting Case As the trial approaches, a Los Angeles judge has released Tory Lanez from house arrest.
keeping up with the royals Yesterday at 4:57 p.m.
Meghan and Harry’s Docuseries Certainly Looks Tense They are ready to tell all … again.
always shopping Yesterday at 4:41 p.m.
Shopping for Texture: 21 Best Winter Accessories A very ASMR-friendly shopping guide.
why is your skin so good Yesterday at 4:39 p.m.
How This Lip Bar Founder Gets Her Skin So Good Melissa Butler on why she loves a product that “does nothing.”
art basel Yesterday at 3:57 p.m.
Pantone’s Color of the Year Is Pretty Gay Viva Magenta (a.k.a. Pantone 18-1750)!
in memoriam Yesterday at 3:22 p.m.
10 Kirstie Alley Moments Permanently Burned Into Our Brains And thank God for that.
lawsuits Yesterday at 12:29 p.m.
Amber Heard Is Appealing the Johnny Depp Verdict Arguing that the judge never should have allowed the case to go to trial in the first place.
crime Yesterday at 12:14 p.m.
What We Know About Takeoff’s Killing A suspect has been arrested on a murder charge for the Migos rapper’s death.
self Yesterday at 11:40 a.m.
There Could Be Bacteria in Your Fancy Laundress Detergent The luxury detergent line is facing a class-action lawsuit and recalled products that it found may contain elevated levels of bacteria.
always shopping Yesterday at 11:13 a.m.
It’s Time to Invest In a Camel Coat Here are 17 for every budget.
celebrity couples Yesterday at 10:30 a.m.
This Good Morning America Romance Keeps Getting Messier It appears T.J. Holmes and Amy Robach’s flirty relationship got them taken off the air.
holiday gifts Yesterday at 8:00 a.m.
What to Gift the Gen-Zer in Your Life According to a member of this generation.
obits Dec. 5, 2022
Kirstie Alley, Cheers and Drop Dead Gorgeous Star, Dead at 71 She led two hit sitcoms, Cheers and Veronica’s Closet.
get it together Dec. 5, 2022
What Are the Best Bedsheets? We came up with a simple list of ten very good options.
More Stories