The Super Adventures of Sophie and the City , a new kids’ book by Kelly Florio Kasouf (daughter of longtime Condé Nast publisher  Steve Florio), chronicles a little girl’s other-worldly adventures at the company’s fabled 4 Times Square offices. A lushly illustrated tale of, according to the author, “fashion, fantasy and female empowerment,”  the book features cameo appearances from many of NYC’s most well-known fashion faces. And given how close Kasouf was to the source material, there’s surely some truth amid the fiction — mainly that Isaac Mizrahi breaks out a pair of glittery wings every once in a while. Read our interview with her below and then click through the slideshow for an excerpt from the book.

What inspired you to do the book?

My father passed away in December of 2007, and I was just missing him. My dad was like a superhero to me. He led two different lives. I’d be sitting at the dinner table and he’d be telling me about all these amazing people he works with, but at the end of the day, he was more interested in my flute lessons. I was collecting all my thoughts from our first “Take Your Daughter to Work” day and how [Condé Nast] was just another world. I thought every single office building in New York City was as glamorous as my dad’s. I was like, “Yeah, no big deal.” I didn’t know any better! He ran it like a movie studio, so everyone from the editors to the publishers down to the security guards and the delivery men thought they were rock stars. I was always so proud of my dad because he was so able to convey that everybody who worked there was amazing and everybody was the best of the best.

So you’d get to make regular trips into the building?

My dad used to bring me as much as he possibly could. I think he thought I was his mascot. I remember [Condé Nast editorial director] Alexander Liberman held me up and said, “One day, this girl’s gonna work at Vogue.” Another time I was introduced to Isaac Mizrahi and I went out to lunch with him and Candy Pratts Price — I just thought she was the coolest chick in the world, and I still do. She came to my Sweet 16. [At the time] Isaac said to me, “How old are you?” and I’m like, “Fifteen… you want to make my Sweet 16 dress?” He goes, “Oh I would love it!”So he ended up designing this beautiful dress for me, that’s why in the book he’s my fashion fairy godfather. I’ll always hold that experience close to my heart.

How did you coordinate with Barcelona-based Judit Garcia-Talavera on the book’s watercolor illustrations?

I would send her 10-12 images per page for inspiration, with artist’s notes that corresponded to each sentence. It was like almost creating mini mood-boards for each page. I would do that for her and she just got it and would run with it. I think we had two revisions, maybe. It was like, “Yeah, maybe make my Dad not look like Burt Reynolds so much.” It was a dream to work with her.

There’s a lot of detail in the imagery — and in the text, too. Were you conscious of writing for a fashion-savvy audience, even within the kids’ market?

Well, it’s just a fun element to add. If you’re a true fashionista, you’ll know she’s wearing Miu Miu shoes and she’s wearing a J. Mendel skirt and, if you really know, you’ll know it’s a McQueen dress she’s wearing and a Philip Treacy hat that she’s wearing. Even though it’s about my past, I had to keep it relevant. That’s why I used current names for the Vanity Fair page — it had to be modern and up-to-date. We’re launching an app as well — it’s basically a flip-through of the book, but there’s audio and video, and then the last page is a links page. It becomes a mini New York City guide for kids, in a way, so they feel like they own the city too.

Was there a particular part of the book’s process that ended up being the most satisfying?

One of the things my dad absolutely loved doing was going to the printing press. He would tell me, “You have to be proud of your product. Everything that you put into it has to be a passion. If you’re not proud of it, then people will pick up on that.”  So when I went to the printing press to see the jacket being printed, it was just sublime.

The Super Adventures of Sophie and the City, available in Barneys stores and online starting mid-November. 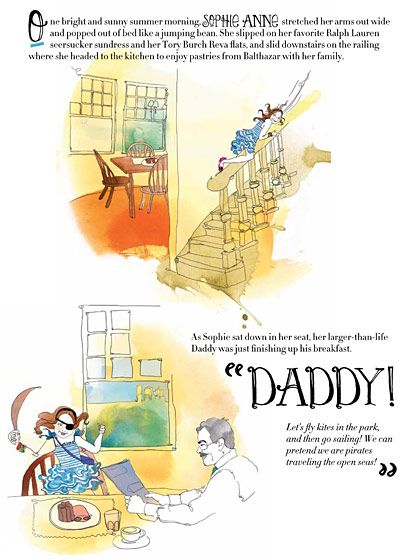 Sophie-Anne is this excitable even before a sugar-laden Balthazar danish. 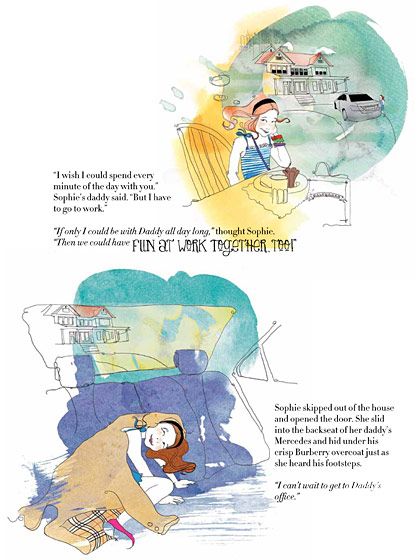 Well, it’s not quite as fun as playing pirates, but some fun is bound to be had at 4TS… 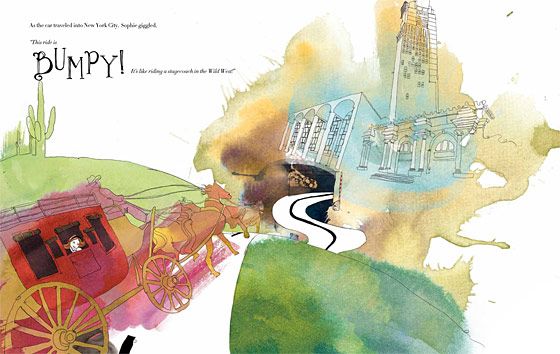 Arriving for work in a horse and carriage is actually not uncommon among Condé’s top editors. 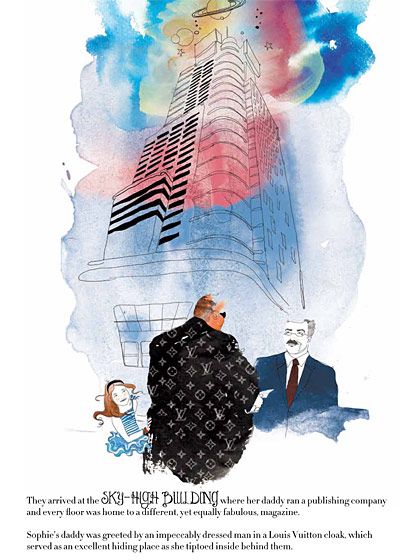 André Leon Talley cameo! No doubt he’ll have an assistant pat down his capes for small children hiding within their folds in future. 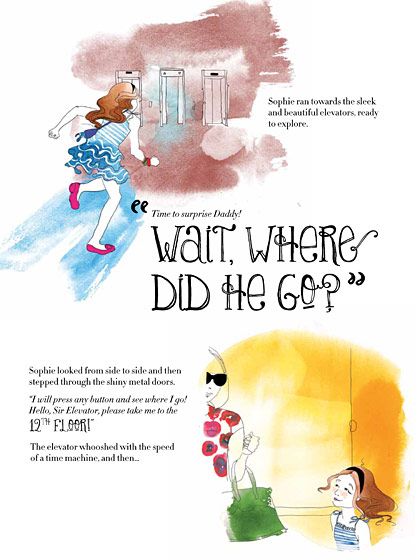 And here’s Anna! She’s just not saying anything in case Sophie-Anne is behind the Condé Nast elevator Twitter account. (It’s always the ones you least expect.) 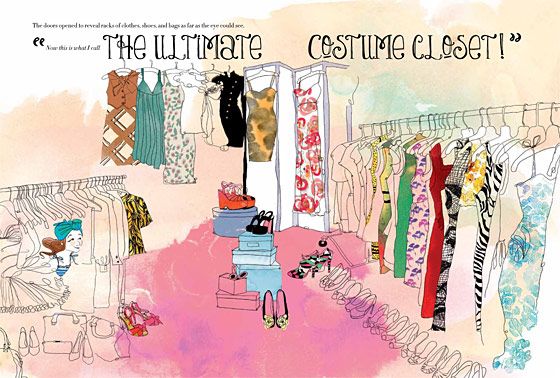 A more macabre story would have poor Sophie-Anne lost forever somewhere between silk scarves and mismatched stilettos. Fortunately, this is an upbeat little yarn. 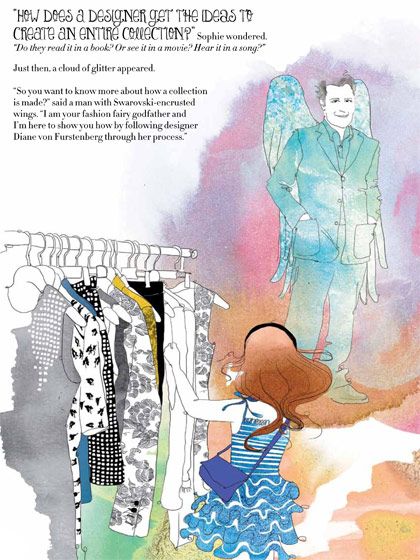 Who doesn’t want to appear in a cloud of glitter, Swarovski-encrusted wings notwithstanding? Lucky Isaac. 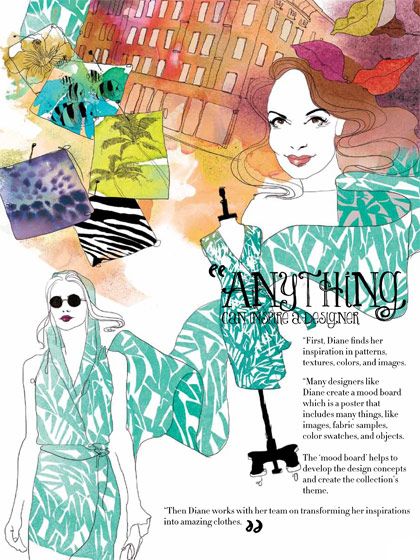 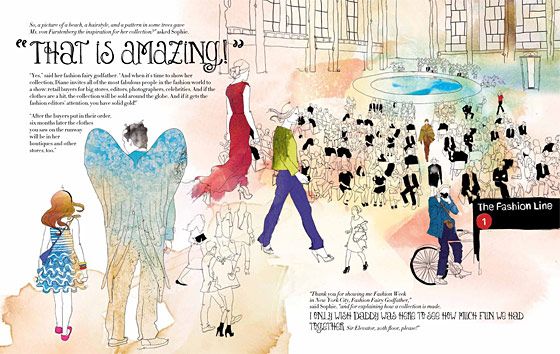 And of course Sophie-Anne gets snapped by Bill Cunningham on her first magical journey to NYFW. It wouldn’t be a fairy tale otherwise.

my two cents 8:00 a.m.
‘I’m a New Parent and Our Finances Are a Mess’ You need a loose, forgiving plan that helps you feel more in control.
By Charlotte Cowles
first person 7:00 a.m.
My Childhood Under Northern Ireland’s Abortion Ban Where do its consequences begin and end?
By Rachel Connolly
rust Yesterday at 5:50 p.m.
Everything We Know About the Rust Shooting An FBI report concludes that the trigger must have been pulled.
sure why not Yesterday at 4:49 p.m.
Are Brad Pitt and Emily Ratajkowski Really Hanging Out? Rumor has it EmRata has “the vibes that Brad likes.”
soho grifter Yesterday at 4:34 p.m.
Anna Delvey Is Getting Out of Jail Having “demonstrated interest in pursuing legitimate employment in the United States,” a judge ruled.
pfw spring 2023 Yesterday at 4:26 p.m.
The T-shirt, Beloved by All, Gets a New Look By Miu Miu, nonetheless. Plus: Louis Vuitton shows a trove of great accessories.
By Cathy Horyn
what the what Yesterday at 4:16 p.m.
Carrie Is a Pigeon Lady Now Is that a real-life bird? No, it’s an $890 designer clutch.
celebrity Yesterday at 3:37 p.m.
What’s Going On With Harry and Meghan’s Netflix Docuseries? The Duke and Duchess of Sussex are reportedly at odds with the producers.
obsessive tester Yesterday at 3:00 p.m.
21 Self-tanners to Maintain Your Summer Glow Through Winter Natural and easy to apply.
power Yesterday at 2:51 p.m.
Iranian Forces Led Brutal Crackdowns Against University Protesters Despite forceful government intervention, women continue to take to the streets in defiance of government orders.
tv Yesterday at 2:32 p.m.
Excuse Me, Who Is This British Baking Show Hunk? Hellooo, Sandro!
what's the reference? Yesterday at 2:15 p.m.
An Early Aughts Staple Has Us in a Hold A personal shopper gives us tips on how to wear a camo miniskirt.
art and soul Yesterday at 1:50 p.m.
The Art of Motherhood In paintings, illustrations, and ceramics, artist Madeline Donahue captures the ecstasy and agony of being a mom.
By Amil Niazi
holiday gifts Yesterday at 1:31 p.m.
16 Gifts That Keep On Giving Whether they’re bandanas for abortion rights or cutting boards to feed the elderly.
power Yesterday at 1:01 p.m.
This Congressional Candidate Gave Birth On-camera “It’s important for folks to see how pregnancy and birth is a medical event that occurs in a hospital with doctors,” says Louisiana’s Katie Darling.
style Yesterday at 1:00 p.m.
Gigi Hadid Called Out Ye for ‘Bullying’ After His YZY Show Ye went after Vogue contributing editor Gabriella Karefa-Johnson on Instagram after she disapproved of his “White Lives Matter” shirt.
celebrity Yesterday at 12:51 p.m.
Angelina Jolie Claims Brad Pitt Choked One of Their Children Pitt’s rep called the allegations “completely untrue.”
pfw spring 2023 Oct. 4, 2022
A Comedy of Errors at Paris Fashion Week This has been an utterly ridiculous Paris season, in the best and worst sense. And it’s not over yet.
By Cathy Horyn
fashion Oct. 4, 2022
How Bella Hadid’s Spray-on Dress Was Made We were just as confused. So we found out.
power Oct. 4, 2022
‘Pro-Life’ Candidate Denies Report That He Paid for an Abortion Herschel Walker’s own son denounced him after an alleged ex-girlfriend told the Daily Beast that Walker had paid for her abortion.
More Stories