This poetic video for TheCorner.com goes quite nicely with Demeulemeester’s dark, graphic aesthetic.

The Poison Hit by Mukunda Angulo

Alla Kostromicheva is a little terrifying, in a good way.

Casting director Andrew Weir tries his hand at fashion film with this dramatic sci-fi short starring Lydia Hearst as some kind of alien. The score is by Tristan Bechet.

Marlon Come Dance With Me by Bruce Weber

As always, Bruce knows how to lighten up fashion videos. 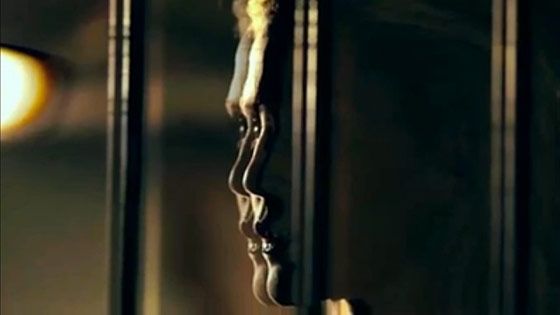 Once the muse to Helmut Newton and Richard Avedon, Nadja Auermann returns to modeling in this Ralph Mecke-directed clip, shot in Berlin. Watch the video here.

The Last Obsession by Luca Finotti

Director Luca Finotti was inspired by controversial Italian filmmaker Pier Paolo Pasolini for this NSFW short, which depicts three male models staring wistfully at the ocean’s shore, and then …

why is your skin so good Yesterday at 5:08 p.m.
How Kelly Rowland Gets Her Skin So Good Her “obsessive” routine involves regular cryotherapy facials, lots of face tools, and multiple cleansers.
fashion Yesterday at 4:23 p.m.
What to Know About the Balenciaga Ad Scandal The fashion house is under fire for two separate campaigns that consumers say promote child exploitation.
celebrity Yesterday at 3:01 p.m.
Meghan Markle Won’t Be Joining The Real Housewives Anytime Soon Fans will have to settle for watching her life on Netflix.
strength Yesterday at 2:56 p.m.
Country Singer’s Kids Are Naturally Ripped, You Freaks Jessie James Decker did not Photoshop abs onto her young children, okay?
is this flirting? Yesterday at 2:55 p.m.
So This Is How Ben Affleck Signs His Flirty Emails Is it a promise, or is it a threat?
gone sale-ing Yesterday at 2:40 p.m.
These 16 Cyber Monday Beauty Deals Are Still Going Strong Tatcha, Sephora, and Nordstrom are still offering some great discounts.
black friday Yesterday at 1:10 p.m.
17 Cyber Monday Fashion Deals You Can Still Shop From Everlane, Nordstrom, Saks, and more.
celebrity Yesterday at 12:52 p.m.
Hailey Bieber Shares Her Experience With Ovarian Cysts She revealed she’s suffering from a cyst “the size of an apple.”
crime Yesterday at 12:27 p.m.
What We Know About the Death of Shanquella Robinson A 25-year-old American woman was found dead while on vacation in Mexico. Authorities have issued an arrest warrant for one of her friends.
ask a boss Yesterday at 12:00 p.m.
‘Should I Give My Boss a Holiday Gift?’ All your questions about holiday gift-giving at work, answered.
dream date Yesterday at 8:00 a.m.
Bilal Baig Steps Into Their Comfort Zone Sort Of’s star and co-creator finds their sweet spot.
gone sale-ing Nov. 28, 2022
What You Need From Net-a-Porter’s Holiday Sale According to the Cut Shop editors.
celebrity Nov. 28, 2022
Is Minka Kelly Dating the Imagine Dragons Guy? She and Dan Reynolds went out for dinner for … five hours?
chaos Nov. 28, 2022
Elon Musk’s Bedside Table Is Even More Terrifying Than You’d Expect Which is more concerning: the multiple guns or the cans of caffeine-free Coke?
brooding Nov. 28, 2022
Are There Any Kids’ Books Out There That Are … Actually Good? Wizards and dragons need not apply.
By Kathryn Jezer-Morton
gone sale-ing Nov. 28, 2022
33 Amazon Gift Ideas That Are Also On Sale For Cyber Monday Kill two bird with one stone.
celebrity Nov. 28, 2022
Pete Davidson and Emily Ratajkowski Hit a New Relationship Milestone They appeared very happy to be together at Sunday night’s Knicks game.
gone sale-ing Nov. 28, 2022
21 Cyber Monday Lifestyle Deals to Make Your Humble Abode a Little Less Humble It’s all in the details.
how i get it done Nov. 28, 2022
Aurora James Is Too Busy For This Interview The Brother Vellies designer talks 80-hour workweeks, supporting Black entrepreneurs, and wearing Issey Miyake to the gym.
astrology Nov. 27, 2022
Madame Clairevoyant: Horoscopes for the Week of November 28 Jupiter retrograde is ending, so you can put the rose-colored glasses back on.
By Claire Comstock-Gay
More Stories