For the past five years, French model Julia Frauche has been quietly working in the more commercial side of the industry. But after an agency switch to Next Models this August, the 23-year-old went from catalogue shoots to some of the world’s most coveted catwalks. Raised in Cannes, Frauche booked an impressive roster of shows during the spring 2012 season: Calvin Klein in New York, Fendi in Milan, and Balenciaga, Givenchy, and Miu Miu in Paris. She’s simultaneously built a stellar editorial track record, including spreads in Numéro, French Vogue, and American Vogue. We sat down with Frauche to chat about her resemblance to Raquel Zimmermann and how she handles the sometimes catty dynamic among models.

Tell me a little bit about your childhood.
I was born close to Paris but then moved to Cannes, where I grew up. I was more like a boy when I was young; I loved school and was always playing soccer with the boys. I would always hurt myself and have to go to the emergency [room]. The first thing my mom did whenever we went for the holidays was to check where the closet hospital was, just in case. I have an older brother and a younger sister. I’m really close with my brother – we’re like twins.

How were you discovered?
I was scouted when I was 16 in the south of France, but I didn’t want to be a model [then]. For me, it was like, “No way!” I loved school too much and wanted to go to college. Then, when I was 18, I moved to Paris for college and they asked me again [to model] and I was like, “Okay, now I’m 18, I’ve graduated. Why not try [it] for one year? And then after this year, I’ll go back to school.” And then, I didn’t.

You’ve been modeling since you were 18, but you just landed your big break during this past spring 2012 show season.
Yes, I took my time to be ready. [Laughs.] No, actually, I changed agencies, that’s why. I was doing money jobs and some magazines before. I was a really shy person when I started, so it took time for me to learn how to communicate with people. I learned by traveling, being by myself all the time. I’m more mature now and I know what I want to do.

What do you remember most about this past fashion season?
I have been doing this job for five years and I was like, “Okay, this is going to be my last chance. I’m going to try the shows and it’s going to be the last time for me.”

But you walked in shows before.
I did, but never in New York.  And so, if you don’t do New York, there’s no point.  So I was like, “Okay, I have nothing to lose.”

Pick one show that was memorable for you.
I have two. Calvin Klein in New York because I didn’t expect it at all.  I found out the day before I was walking the show, so I couldn’t sleep all night. I was so nervous and I don’t know — this feeling when I entered the catwalk, it was amazing. And then the second one was Chanel because I worked there for five years before, doing showroom and fittings, so it was a big gift for me to do the show.

Did you ever feel other models getting competitive during the shows?
Yeah, a little bit. For me, it’s okay, I’m happy for everyone. Everyone has a place here. But some of the girls, they’re younger; at the beginning of New York Fashion Week, they talked to me, but after New York, they didn’t talk to me anymore. I was like, “Okay, I’m not 16 anymore. I don’t want that, I don’t care about it. I’m going to do my job and that’s it.”

How did you decompress post-Fashion Week?
I didn’t have time to relax, actually. I worked straight away after the shows. I had, like, a few days in Paris. I was just going back to my normal life, going to the supermarket, doing my laundry, watching TV, spending some time with my boyfriend, that’s it.

What does your family make of your newfound success?
My mom is really happy for me because I’m happy. She doesn’t understand what it means for me, all these shows, but she’s happy. The only thing is that she saw me on French TV and she was like, “You need to sleep! You need to eat! You look so tired and skinny!” But, she’s my mom. My boyfriend was so nice during the shows. Even when I was in New York, he would stay up all night to watch the shows online.

What’s your diet like?
I’m French. I’m crazy about cheese, bread, charcuterie, all those croissants, and stuff. I think I’m lucky. I eat what I want to eat. If it makes me feel happy, I never feel guilty so I think that’s why I’m in shape, you know?

What about books? Any good ones you read lately?
I really love Amélie Nothomb. My favorite one by her is Hygiène de l’assassin. When I read the first page, I was hooked. You can feel she’s a little bit crazy. She was anorexic and had some trouble with men. She’s a really good writer and I love it.

James Scully told us you reminded him of Raquel Zimmermann.
Everyone is calling me “Baby Raquel.” This season, everyone was like, “Oh, you’re baby Raquel.”  But it’s a really good compliment for me; I’m really happy about it because I love her.  She’s beautiful, and I hear she’s nice, too.

Tell us a secret.
I’m 23 and I still sleep with my Winnie the Pooh, okay?

What is something that you have in Cannes that you cannot find in New York, Paris, or Milan?
First of all, the beach! Just living, growing up by the beach is something really special. I didn’t realize it when I was there but now I know how nice it is. It’s quiet and you can go swim and I don’t know, you don’t feel the pollution.

Guilty pleasure?
I’m crazy about cheesecake. I’ve been to Magnolia Bakery. Oh my god, that is the best for me! And I love the chocolate pizza at Max Brenner.

What is the best advice you’ve received on modeling?
When I started and I was really shy, everyone tried to change me. They told me, “You have to be crazy, you have to be mean. You have to scream.”  I was like, “I’m not going to do that. I’m not like that and I’m not going to change my personality.”  And now I’m really happy because some people, they were like, “You just have to be yourself.  Don’t lie about your age.  If you’re a nice person, be a nice person.”  This is the best advice. I feel good about that. I can be myself and work a lot. 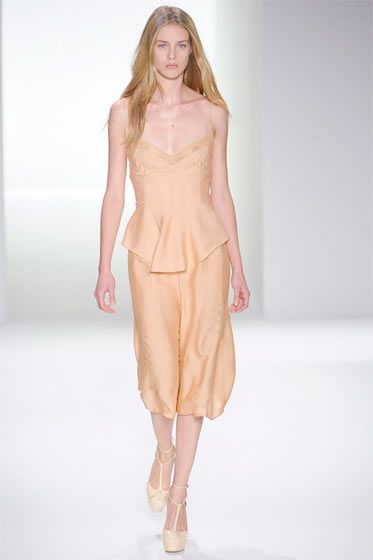 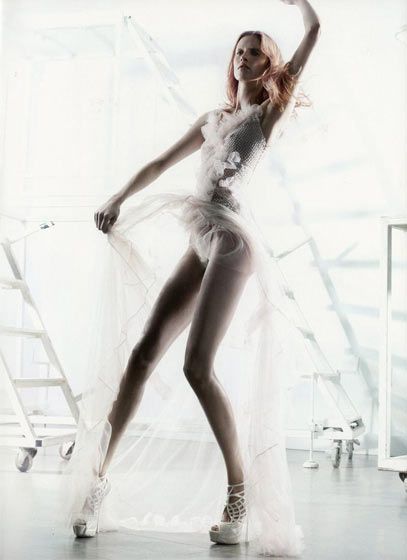 In a Numéro editorial, November 2011. Photographed by Liz Collins. 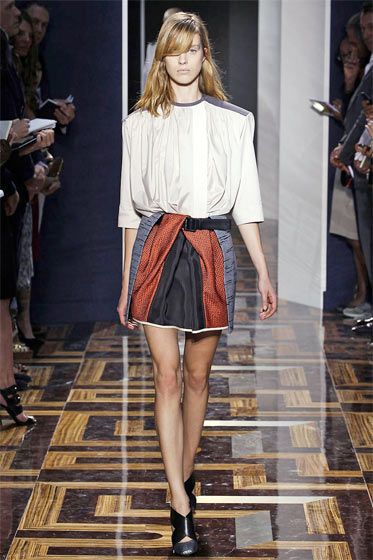 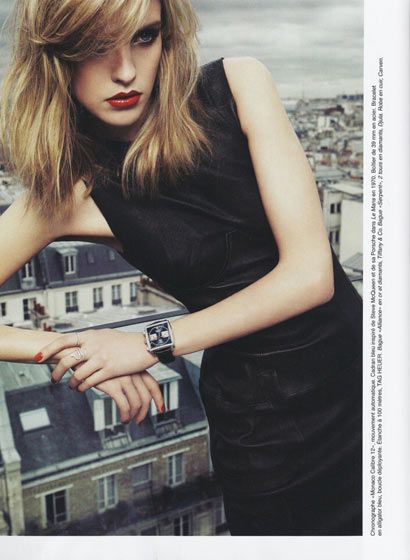 In a French Vogue editorial, December 2011. Photographed by Claudia Knoepfel and Stefan Indlekofer.

what we know 6:45 p.m.
Texas Officials Acknowledge Botched Police Response to School Shooting The local police chief in charge delayed confronting the gunman — while kids trapped inside the classroom repeatedly called 911 asking for help.
burnout Yesterday at 4:00 p.m.
When to Just Quit Already How to figure out it’s time to move on — and be okay with it.
uvalde Yesterday at 2:40 p.m.
What We Know About the Police Response to the Uvalde Shooting Authorities have now said that not breaching the classroom the shooter occupied for more than an hour was “the wrong decision.”
obsessive tester Yesterday at 2:24 p.m.
I’m On the Hunt for the Best Sunscreens Without a White Cast These are my current favorites.
gone sale-ing Yesterday at 2:10 p.m.
I Didn’t Know Luxury Until I Got These Linen Sheets And they are currently 15 percent off.
q&a Yesterday at 2:00 p.m.
Is Somewhere Good the Future of Social Media? We spoke to Annika Hansteen-Izora, the designer of the app, about slowing down and truly connecting.
as told to Yesterday at 1:48 p.m.
How Teachers Talked About Uvalde With Their Students After the Texas school shooting, educators share their fears and frustrations.
By Bindu Bansinath
style Yesterday at 1:41 p.m.
The Best Looks From the Cannes Film Festival All hail the ball gown.
action item Yesterday at 1:15 p.m.
How to Help the Uvalde Community From supporting Robb Elementary School families to pressing for gun-control legislation.
gun control Yesterday at 1:06 p.m.
Jacinda Ardern’s Commencement Speech Could Not Be Timelier “We knew we needed significant gun reform, and so that is what we did,” New Zealand’s prime minister said.
q & a Yesterday at 12:36 p.m.
Meet Koa, the Beauty Brand Celebrating Hawaiian Culture The company is making it a priority to share the culture of Hawaii with the world.
celebrity Yesterday at 12:27 p.m.
Another Celeb Has Shared Their Thoughts on Depp v. Heard Dominic Fike said during a performance that he has “visions” of Amber Heard “beating me up.”
gun violence Yesterday at 12:24 p.m.
The Supreme Court May Be About to Expand Gun Rights Even More In June, the Court could rule New York’s concealed-carry-license regulations unconstitutional.
i tried it Yesterday at 12:00 p.m.
Can Reciting a Daily Mantra Make You Treat Yourself Better? For weeks, I’ve been repeating kind messages to my reflection.
father's day Yesterday at 10:28 a.m.
What Our Editors Are Gifting Their Dads Spoiler warning for Cut dads.
gun control Yesterday at 9:45 a.m.
The NRA Will Still Hold Its Conference in Texas This Weekend Ironically, attendees will not be allowed to bring guns to the event.
health Yesterday at 8:49 a.m.
The Baby-Formula Shortage Won’t Get Better Anytime Soon FDA commissioner Dr. Robert M. Califf said that shelves should be restocked by late July.
encounter Yesterday at 8:00 a.m.
The Hostess Who Kept Their Secret Grace Faison — the 97-year-old Brooklyn Heights fixture — opens up about secretly housing women seeking illegal abortions in the late ’60s.
By Eliza Gray
lawsuits May 26, 2022
Amber Heard Says Her Defamation Trial Is ‘Humiliating’ and ‘Painful’ On the last day of testimony, Heard again denied claims from Team Depp that she lied and falsified evidence.
uvalde May 26, 2022
‘As Teachers, We’re Expected to Put Our Lives on the Line’ An educator near Uvalde feels the weight of the Texas school shooting.
More Stories