Every year, some gamine, non-blonde actress with big eyes (Natalie Portman, Anne Hathaway, Emma Watson et al.) is inevitably likened to Audrey Hepburn. Enter: Rooney Mara, 2012. Though not an entirely obvious comparison, Hepburn and Mara might have more in common than unwavering stares and enviable cheekbones. Tomboyish and brunette, Audrey was a refreshing alternative to fifties pinup stars Lana Turner and Marilyn Monroe, and Rooney certainly stands out for her non-conformist goth-princess vibe.

Both actresses became superstars seemingly overnight. Hepburn’s 1953 breakout role in Roman Holiday – as a princess gone AWOL – earned the previously obscure beauty an Oscar for Best Actress; Mara has the chance to make that happen this year. Hepburn didn’t have to pierce her nipple to play Princess Ann, but let’s not forget that in her later role in Breakfast at Tiffany’s, she actually portrayed a high-class hooker, so Hepburn was obviously not afraid to take some risks. Just as Truman Capote envisioned Marilyn Monroe for the role of Holly Golightly, Scarlett Johansson auditioned for the role of Lisbeth Salander; both Hepburn and Mara won out over bombshell blondes for their respective roles.

One thing at least seems certain in the history of Other Actresses Compared to Audrey-Hepburn: None but Mara share her baffling ability to turn crazy bangs into style statements.

See our slideshow for a complete comparison of the actresses’ looks.

Neither actress gained much popular traction with long flowing hair, and each underwent a dramatic transformation at the very beginning of her career, to bold effect. Left: Hepburn with her pre-chopped “Princess Ann” hair in Roman Holiday. Right: Mara with her Social Network college coed hairstyle.

Probably less than 0.01 percent of the population has the bone structure to make such thick, dark, blunt bangs look fashionable, and these ladies’ readily remind the world that pageant updos are seldom the chicest red-carpet choice. Left: Hepburn attending a benefit premiere of Roman Holiday, Westwood, CA, 1953. Right: Mara attends the The Girl With The Dragon Tattoo premiere at the Cinestar movie theater on January 5, 2012 in Berlin, Germany.

In an article that ran in American Vogue in 1954, Cecil Beaton said of Hepburn, “There is no lack of vigor in her rejection of the softly pretty.” Dragon Tattoo director David Fincher’s assessment of Mara in Vogue’s November 2011 issue — “She’s a weirdo. She’s a great weirdo” — was less poetic, but makes the same point. Left: Hepburn in London’s West End, October 1950. Right: Mara at the Villamagna Hotel, Madrid Spain. January 2012.

Hepburn’s longtime relationship with Hubert de Givenchy (he made many of the clothes she wore in her films and elsewhere) is the stuff of fashion legend and launched the phenomenon of the Little Black Dress. Mara’s signature look is shaping up to be a striking LBD, often paired with dramatic red lipstick. Left: Hepburn in a black sleeveless dress, circa 1955. Right: Mara at several recent premieres and events.

Her famously nipped waist might have had something to do with the malnutrition Hepburn suffered during WW2, or perhaps it was her ballet training. Mara’s middle may not be quite as narrow, but it’s sure to stay slim with her elective starvation. Left: Hepburn as she appears in Sabrina directed by Billy Wilder, 1956. Right: Mara in Berlin, Germany, January 2012.

Actor Mel Ferrer (Hepburn’s first husband and the father of her first son) was well known for being a control freak. Ferrer and Hepburn in Europe, 1950s.

Even though they are not romantically linked, director David Fincher and Rooney Mara’s relationship has been noted for its intensity and described by Daniel Craig as, “F—king Weird.” Fincher and Mara in Stockholm, Sweden, November 2011.

Breakfast At Tiffany’s has been referenced (according to our expert analysis) roughly 100 million times by fashion editorials. Hepburn, as Holly Golightly, in a still from the film Breakfast at Tiffany’s. 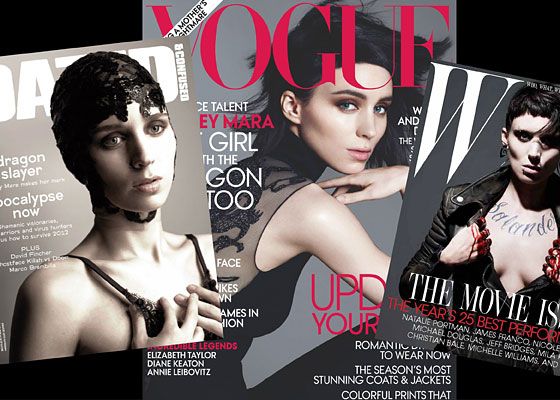 GWTDT might also become a fashion editorial-inspiring phenom. (And that’s not even taking into consideration the clothing lines born from the movie.) Various covers of fashion magazines featuring Rooney Mara in her new look.

goodbyes 12:30 p.m.
RIP, Stripper Web For 20 years, the forum was a haven for new dancers seeking community.
ask a boss 12:00 p.m.
How to Answer ‘Why Are You Interested in This Position?’ in a Job Interview This is usually one of the first questions asked in an interview, and you shouldn’t wing your answer.
auto-refill 11:58 a.m.
The Beauty Products Beyoncé’s Makeup Artist Sir John Uses to the Last Drop Including Barbara Sturm’s Lifting Serum, Supergoop’s Unseen Sunscreen, and SkinMedica’s TNS Serum.
grammys 2023 11:21 a.m.
Jay-Z Thinks Beyoncé Deserved Album of the Year Too In a TIDAL interview, he said that Renaissance “has inspired the world.”
action item 10:35 a.m.
How to Help the People of Turkey and Syria Two powerful earthquakes have killed more than 5,200 people.
power 8:00 a.m.
Inside the ‘Rampant Culture of Sex’ at ABC News T.J. Holmes and Amy Robach weren’t the only ones — “It felt like everybody was sleeping around,” said one former GMA staffer.
By Angelina Chapin
reality tv 7:00 a.m.
Real Housewives Helped Heather Gay Actually Get Real Her new memoir, Bad Mormon, recounts how Bravo delivered her from the church.
yikes Yesterday at 7:26 p.m.
Ashton Kutcher and Reese Witherspoon’s Awkwardness Kinda Makes Sense Even Mila Kunis noticed something off between these rom-com stars.
copenhagen fashion week Yesterday at 7:04 p.m.
9 Things I Learned at Copenhagen Fashion Week Scandinavian style and its purveyors might be onto something!
power Yesterday at 2:00 p.m.
What to Know About the Protests in Iran Since Mahsa Amini’s death, Iranian forces have killed more than 500 protesters, including women and children.
is this flirting? Yesterday at 12:58 p.m.
Divorced Dad Experiments With Thirst Traps A newly retired Tom Brady is posting mirror selfies.
brooding Yesterday at 12:00 p.m.
What If You Just Didn’t Clean That Up? Our ideas about cleanliness are stuck in the mid-20th century. Today, women can afford to care less.
By Kathryn Jezer-Morton
:( Yesterday at 11:21 a.m.
Ben Affleck Plumbs New Depths of Existential Despair Not everyone had a nice time at the Grammys, but at least one man was honest about it.
hairy situations Yesterday at 11:00 a.m.
15 Ways to Convince Your Hair to Grow Faster and Longer It’s not just a waiting game.
By Erica Smith
grammys 2023 Yesterday at 9:47 a.m.
Fans Are Still Processing That Beyoncé Snub Are Grammy voters okay?
rich people stuff Yesterday at 8:00 a.m.
The Fleishman Effect In a city of Rachels and Libbys, the FX show has some New York moms worried they’re the ones in trouble.
By Caitlin Moscatello
appointment viewing Yesterday at 8:00 a.m.
The Last of Us Is the Apocalyptic Tearjerker You Won’t Want to Miss Yes, that zombie-apocalypse show The Last Of Us is actually worth the hype.
how i get it done Yesterday at 7:00 a.m.
Misty Copeland Is Back in the Studio And preparing for her return to the stage since becoming a mother and authoring a memoir. Here, she shares how she gets it all done.
grammys 2023 Feb. 5, 2023
The Best, Wackiest, and Most Tin Man–Like Looks From the Grammys Red Carpet No, Beyoncé did not walk the carpet, but Cardi B, Harry Styles, Lizzo, and Taylor Swift arrived in their sparkliest outfits.
grammys 2023 Feb. 5, 2023
The 9 Grammys Beauty Looks We Are Re-creating ASAP Want inspiration for your GRWM? Doja Cat absolutely wins in the winged-eyeliner category.
More Stories