Easily one of foremost talents in fashion’s moving image, director Barnaby Roper filmed two shorts this month. The first stars model Anna Jagodzinska styled exclusively in Rodarte and Swarovski, while the second was a frenetic piece for Karl by Karl Lagerfeld. Meanwhile, celebrated filmmaker Pedro Almodóvar appears in a Marco Maccapani-directed video alongside two of his muses, Rossy de Palma and Bianca Suárez. Italian model and socialite Elisa Sednaoui also tried her hand at film, directing an introspective mediation on friendship, which calls to mind Erick Zonca’s The Dreamlife of Angels. See these videos, and one short influenced by Luca Guadagnino’s I Am Love, in the slideshow ahead.

Anna vs. Anna by Barnaby Roper

Because if one Anna J. isn’t enough, why not have two battle it out wearing Rodarte?

Director Nick Sweeney filmed this breezy short with two models writhing about on a beach, with Number One Ensemble’s “Flor de Coca” as the soundtrack.

The Necklace Affair by Sandra Suppnig

Robots on Meth by Elisa Sednaoui and Martina Gili 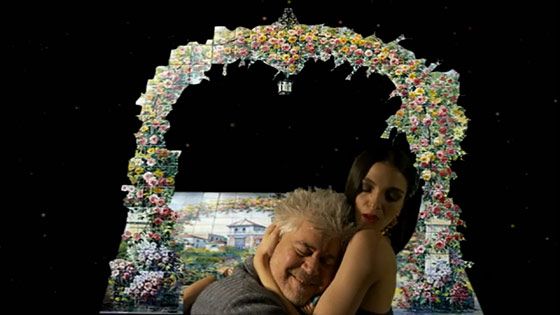 Jacobs of the Jungle by Marc Jacobs

We don’t know about you, but this is how we get dressed in the morning, too.

The New Mix by Barnaby Roper

Yes, this clip boasts an all-star cast of Saskia, Abbey, and Anja, but can we discuss how stunning Chinese model Sui He looks in this video for Karl by Karl Lagerfeld?

shopping 4 mins ago
14 Brands Getting Plus-Size Swimwear Right Here’s where to shop.
closings 18 mins ago
Bye-Bye, Bite Beauty After a decade in business, the brand is shutting down.
"size inclusivity" 3:40 p.m.
Victoria Beckham Says Wanting to Be Thin Is ‘Old-Fashioned’ Then why does her line only carry dresses up to size 14?

the most fertile man 3:38 p.m.
Nick Cannon Says He’s Considering a Vasectomy “I ain’t looking to populate the Earth completely.”
power 1:35 p.m.
Fans Are Spending Thousands to See the Depp v. Heard Trial Some traveled cross-country, camping outside the Virginia courthouse for the chance to be among the trial spectators.
shopping 1:16 p.m.
17 Fisherman Sandals That Are Actually Cute No bait required.
sober questioning 12:00 p.m.
‘I Got Sober by Mistake — Can I Go Back to Drinking?’ That’s up to you. But give yourself credit: It wasn’t an accident, it was your choice.
By Ana Marie Cox
culture 10:08 a.m.
18 Books Our Favorite AAPI Writers Love Recommendations in celebration of AAPI Month from some of the Cut’s favorite writers.
health 10:00 a.m.
The Baby-Formula Shortage Keeps Getting Worse Anxious parents are navigating supply-chain issues, recalls, and rations.
the glow up 8:00 a.m.
Get Your Glitter Out: Party-Girl Chic Is Back Making the case for Y2K rebellion against “that girl” culture.
lawsuits Yesterday at 6:19 p.m.
Amber Heard Says She Thought Johnny Depp Would Kill Her Depp’s attorney tried to undermine Heard’s credibility during cross-examination.
internet drama Yesterday at 6:14 p.m.
Bobbi Brown vs. a TikTok Influencer It all started with a video of Meredith Duxbury trying the new Jones Road What the Foundation.
q & a Yesterday at 4:35 p.m.
Christine Quinn Is ‘the B*tch Whisperer’ The reality star’s self-help manifesto, How to Be a Boss B*tch, is all about stepping into your (her?) power.
celebrity apologies Yesterday at 4:10 p.m.
Neil Patrick Harris Is Sorry About That Charcuterie Plate The actor apologized for serving a cured-meat display designed to look like “the corpse of Amy Winehouse” at a 2011 Halloween party.
father's day Yesterday at 4:00 p.m.
34 Best Father’s Day Gifts No Dad Can Resist A gift for every kind of dad.
culture wars Yesterday at 3:48 p.m.
Mother Outraged Her Biracial Son Has Learned to Identify Racism Melissa Riley tried to sue her son’s middle school for teaching him about inequality.
covid-19 Yesterday at 3:30 p.m.
When Will Young Kids Be Able to Get the COVID Vaccine? The FDA has now authorized Pfizer boosters for children ages 5 to 11.
flirting? Yesterday at 1:13 p.m.
Cara Delevingne, Self-Appointed Hype Woman She wouldn’t leave Megan Thee Stallion alone at the BBMAs.
diy Yesterday at 1:00 p.m.
We Made Our Own Version of the Controversial $1,850 Balenciaga Sneakers We had $50, an old pair of Converse, and a sense of duty.
ask a boss Yesterday at 12:00 p.m.
‘Several of My Co-workers Were Fired. Am I Next?’ It’s possible your company fires people without warning, but it’s just as possible there were warnings you weren’t privy to.
More Stories