THEY’RE BACK. And lest you think those crazy Jersey Shore kids brought home any of Italy’s finest designer attire from their season abroad, they didn’t. Seaside Heights seems to have a uniform, even though we doubt there’s ever a dress code. Skin is too tan, biceps are too taut, and skirts are, for the most part, short enough that they deserve a-yet-to-be-invented name (“mini” just doesn’t do it).

After Deena makes out with some tarmac at the crew’s Stateside airport, Pauly D and Vinny make quick business of going to the barbershop. Neither of them eschew their regular ‘dos, as it’s now likely in everyone’s contract that they can’t change their appearance. And that’s actually a good thing because a bout of playful narcissism in front of a mirror left us aware of the horrifying possibility of what could be were Vinny to grow his hair out. Keep a razor close at all times, Vinny, and not just for the bar brawls. 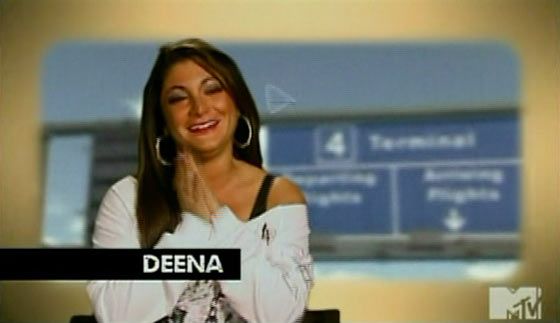 Now that the Shore cast member are all clearly motivated by the prospect of spinoffs and solo projects, Deena ran off set and auditioned to join the backup-dance cast of a Broadway show … Jersey Boys being the obvious choice. 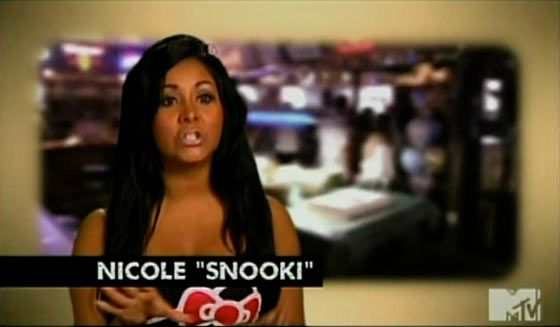 Is this a Hello Kitty tank top, and if so, will Sanrio be prepared to take on Snooki in an Abercrombie & Fitch vs. Situation–style standoff? Because really, Snooks and the cutesy little white kitten aren’t the most logical of bedfellows. 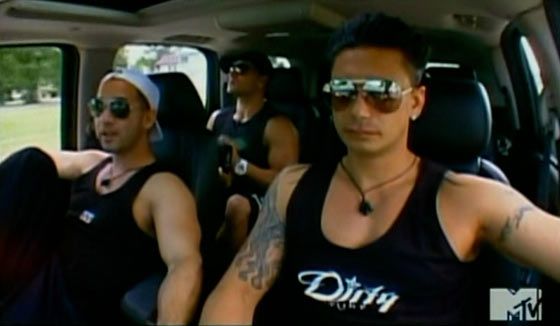 The Situation, Ronnie, and Pauly D

When a beachside stall–bought tank top’s slogan says it all. (DIRTY.) 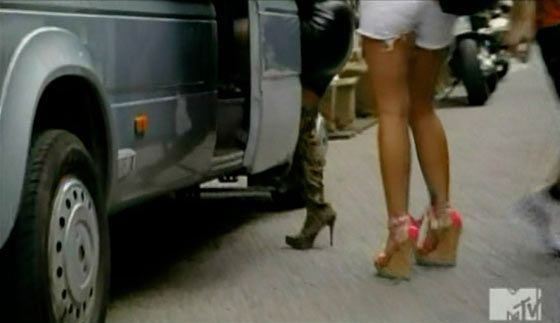 This is a serious question for the TSA: How can a person get through airport security with these stilettos, but not with a red velvet cupcake? Priorities, please. 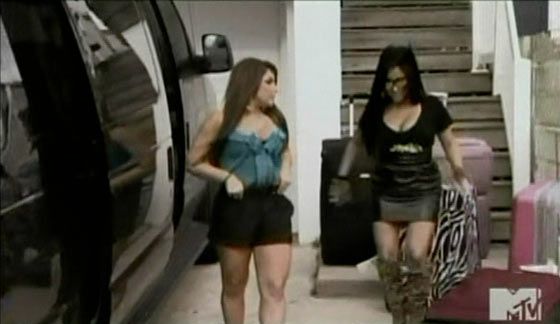 Even considering Deena and Snooki’s petite stature, this has to be a very big Humvee or the girls must have shrunk in the wash (along with the skirts they’re wearing). And really, who travels like this? These girls run around in fuzzy pink sweatpants at the most inopportune moments, why not pick a pair for a long, otherwise uncomfortable car ride? 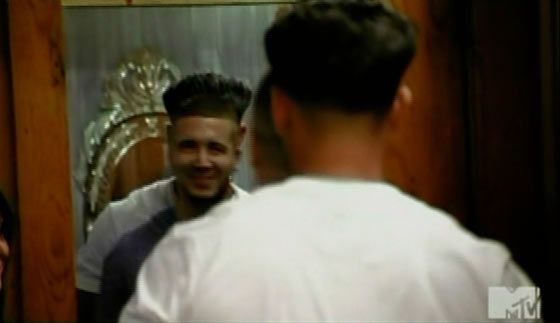 Vinny D — who is, thankfully, not a real person at least in the context of this show. But, somewhere…

This looks like a crow crash-landed onto Vinny’s head. 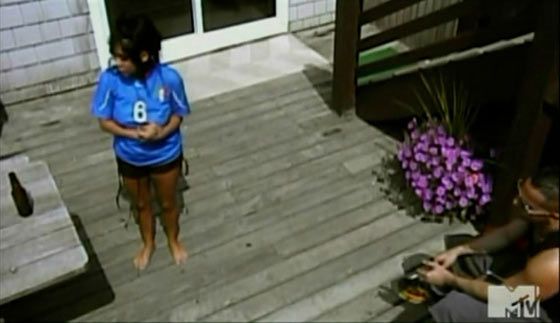 Well this is just awkward, very awkward in fact. Even the shrubbery is thinking to itself, “I’d rather be in some other roided-out rental home right now.” It’s also worth questioning Snooki’s judgement here — not like for the first time or anything, but still: This is an Italian soccer jersey (or so it would seem to our not-too-good-with-sports-stuff eyes). The keyword here is ITALIAN. We all know what did/didn’t go down between Snooki and The Sitch over in Italy, and here she is, throwing it back in his face with the country of their alleged sexytime’s flag right at the spot he’s going to ogle first. 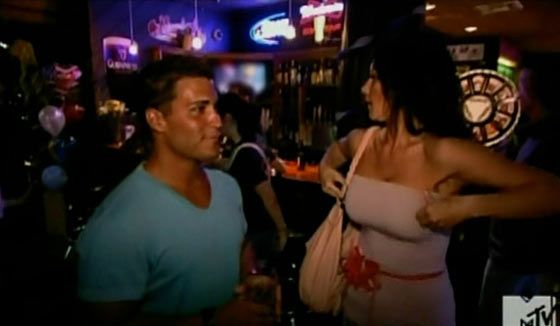 reesespieces: I am going to self-flagellate in a moment to atone for this comment, but this guy has an attractive profile. laurasaurus: Blue-shirt guy? reesespieces: Yeah, blue-shirt with just enough of a deep V to make you want more guy laurasaurus: That’s Snooki’s boyfriend, I think. Jionni? He wasn’t very nice this episode. reesespieces: Oh dear, guidos behaving badly? He’s doing OK right now, being a good loyal bf and not even looking at JWoww’s copious assets. reesespieces: Even when she’s clearly testing him with this whole “oh no my tube top should be falling down but it isn’t so i’m going to play around with it a bit.” laurasaurus: Well, if anyone was going to successfully defy gravity, it would be JWOWW. Also, she looks literally gift-wrapped. reesespieces: Too true. That is a classy little gift bow at her waistline. 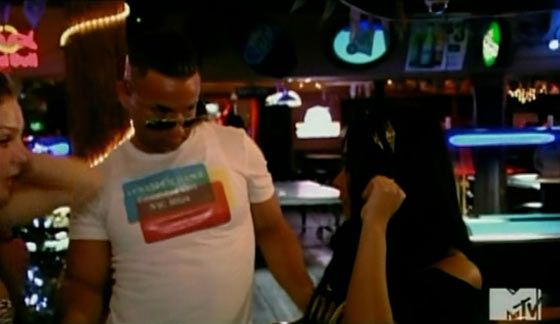 Sometimes style doesn’t need to be about clothing. Or accessories. Or a glistening forehead. Sometimes it’s just a werq-worthy pose. But why is the Sitch wearing what could be one of those “support tanks” under his tight, white clubbing tee? There hasn’t been time since Italy for his abs to go south.

celebrity 4:37 p.m.
Hayden Panettiere Calls Giving Up Custody of Her Daughter ‘Heartbreaking’ “It was the worst, signing those papers.”
obsessive tester 4:00 p.m.
21 Hand Creams You Probably Need Right Now Because you’ve been washing them incessantly.
By The Cut
transgender rights 3:32 p.m.
Virginia Students Walk Out in Protest of Anti-Trans Policies Students at over 90 public schools are protesting the governor’s proposal to roll back transgender rights.
celebrity 2:13 p.m.
Elizabeth Chambers Allegedly Tried to Expose Armie Hammer in the Press A friend says Hammer’s estranged wife used her email to leak rumors about him to the press.
power 12:35 p.m.
Women Across Iran Are Protesting the Morality Police Following the death of Mahsa Amini in police custody, women are burning their hijabs and cutting their hair in the streets.
holiday gifts 12:15 p.m.
46 Christmas Gifts for Any Kind of Mom Whether she’s into cooking, skin care, gardening, or relaxing.
By the Cut
gender reveals 11:01 a.m.
Another Gender Reveal Ends in Environmental Disaster A couple in Brazil may have contaminated one town’s water source by dyeing a 60-foot waterfall blue.
gone sale-ing 10:02 a.m.
Saks’ Friends and Family Sale Will Make You Look Forward to Winter Puffer coats, boots, and knitwear, all on sale.
cut chat 10:00 a.m.
Every Thought We Had Watching Don’t Worry Darling For starters, it was definitely a movie.
how i get it done 10:00 a.m.
How Manicurist Jin Soon Choi Gets It Done During Fashion Week “If one hour before the show we still have models to do, my heart starts pounding. I want everything done without any delay or drama.”
By Danya Issawi
dream date 9:00 a.m.
A Hot Time With Harris Dickinson The Triangle of Sadness star reimagines what it means to be a modern man between sauna steams.
By Hanna Hanra
encounter 8:00 a.m.
17 Seconds With a Spotted Lanternfly Face-to-face with the stylish invasive species. So do I smoosh it or not?
By Matthew Schneier
at home in asian america 8:00 a.m.
For Domestic Workers, the Asian Class Divide Begins at Home Five nannies from the Philippines, Nepal, and China open up about what it’s like to work for their Asian American employers.
By Arya Sundaram
ambition 7:00 a.m.
Even Kelly Ripa Has to Deal With Sexist Bulls- - - at Work As the Live! host writes in her new collection of essays, seniority is a “masculine word.”
crime Yesterday at 5:19 p.m.
A Train Hit a Police Car With a Woman Handcuffed Inside She survived, though her attorney wonders why Colorado officers left their SUV parked directly on the tracks.
mfw spring 2023 Yesterday at 5:19 p.m.
The Best Street Style at Milan Fashion Week Chic looks from this fashionable city.
royals Yesterday at 4:43 p.m.
The Palace Is Reportedly Panicking About The Crown Again Royals are concerned the upcoming season will damage King Charles’s reputation.
all in the family Yesterday at 3:33 p.m.
Untangling the Secrets of a Teenage Mother We think of our parents as known quantities. But as Salon editor-in-chief Erin Keane writes in her memoir, Runaway, we rarely know the whole story.
mental health Yesterday at 3:15 p.m.
Megan Thee Stallion Wants to Help Hotties Get Therapy “Bad Bitches have bad days too.”
culture Yesterday at 11:57 a.m.
Why Is Hollywood Still So Obsessed With The Stepford Wives? Don’t Worry Darling wears its references to the cult classic on its sleeve.
More Stories