This all-star season of Project Runway taped last summer, during the hottest month of the year in New York City. And here’s a fun little fact — that is, unless you were involved with the show at the time, in which case it obviously wouldn’t have been fun at all — the office building used as the contestants’ workroom closed on weekends, which meant there was no air conditioning during those two days, period. We’d guess this week’s episode filmed over one of those horrible 100-degree weekends, and that’s likely why:

1) The designers got a gelato-inspired challenge, because it’s a cool, refreshing treat for a hazy workroom.

2) The challenge had to be cut to six hours, because otherwise all the icy, fruity goodness would have melted.

3)  Mondo’s been wearing so many cute short-shorts.

Tasked with creating a “tasteful outfit” inspired by gelato, each designer chose a flavor, and then selected another designer to go after them. After her turn at the gelato cart, Kenley didn’t pick her workroom BFF Kara to choose a flavor next, which: Gosh, Kenley, good friends don’t screw each other over in dessert-themed reality TV challenges, it’s like the 73rd rule of sisterhood. That foul play left Kara with perhaps the trickiest gelato: chocolate cayenne (other easier and possibly tastier flavors included kiwi, blueberry, and green tea).

Even with the crazy limited time frame, the ever gratuitous HP product placement meant the designers had to endure a half hour’s worth of sketching on their snazzy tablets before wasting another half an hour scavenging for fabric in a “mini-Mood.” Since there wasn’t time to go to the actual Mood store, producers re-created it in the adjoining lounge by dumping a bunch of fabric in there for designers to “shop” from. That’s a full sixth of the challenge’s allotted time gone before the workroom time began. Also a time-suck was Joanna Coles, who brought mini-cups of gelato for each designer when she came into the workroom to critique them, breaking what we thought to be a steadfast rule in fashion schools and studios: no food allowed, and certainly not on cutting tables near easily stained fabrics. Her role seemed somewhat diminished this week, because none of the designers could really take the time to stop or chat, nor were any of them really working on garments complex enough to warrant much in-depth assessment.

As Anthony notes, the challenge rapidly became less about design and vision, and more about speedy competence at the sewing machine. (Side note: Isn’t it refreshing to hear Anthony speak sensibly, rather than spouting overthought, sassy one-liners when he senses the cameras are near?) Granted, some designers’ projects were possible to complete in five hours,  and others were not, but everyone is clearly compromising both their aesthetic and their production standards. Given the high caliber of work produced so far, that’s a real shame — but it’s also testament to the designers’ skill that the finished looks wouldn’t have looked out of place on a regular season’s runway after a two-day-long challenge.

But shortcuts and errors still happen: Austin wields a glue gun with guilty pleasure, April’s skirt rides up far too far in the back, Kara’s layered dress’s proportions take her model from “rail thin to a pregnant cupcake,” as Jerrell brilliantly stated.

So while the designers’ collective effort was far from lacking, they were so rushed that the most they could hope for was to just survive, rather than to produce something actually great. This left the runway post-mortem feeling less constructive than usual — and neither of this week’s guest judges helped the proceedings at all. Miranda Kerr liked just about everything, as long as she could breastfeed in it; Diane von Furstenberg was surprisingly harsh in her judge’s seat, but with inconsistent criticisms we felt unfairly ignored the challenge’s time constraints. She also threw this week’s requisite Halloween-themed critique into the mix (tip for anyone playing Runway viewing-party drinking games: Take shots every time the H-word gets dropped and you’ll be a mess in no time).

Michael, master of the faux-shocked beauty queen face,  won (again) for something light pink and billowy, beating Mila’s watered-down-toothpaste shift dress and Mondo’s cantaloupe thing. With yet another pair of ladies in the bottom two spots, the judges found Kara’s droopy ruffles slightly less egregious than April’s half-finished dark purple tutu, so grumpy little April is out. Of the twelve slots for bottom-three designers so far this season, ten have been female; of the twelve in the top three spots, ten have been male. Make of that what you will. 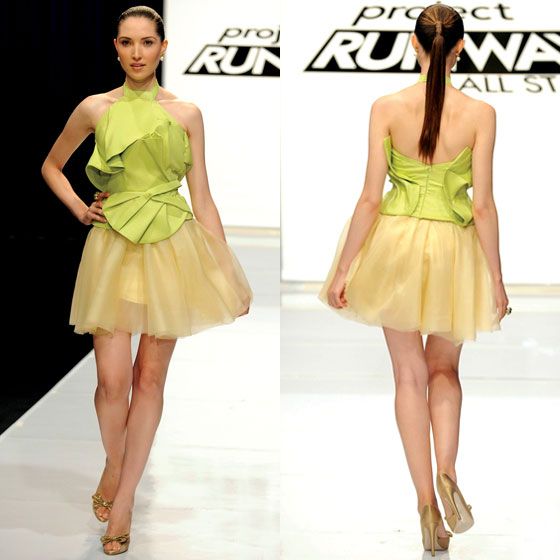 The first we heard of Anthony’s dippy, drippy gelato inspiration was when his look stumbled into the judges’ firing line, where his smooth talking somehow saved him. His green tea color scheme read less Japanese chashitsu and more bad office tea in a plastic cup; the construction of his bodice’s asymmetrical pleats seemed sloppy in a not-intentionally melted manner. 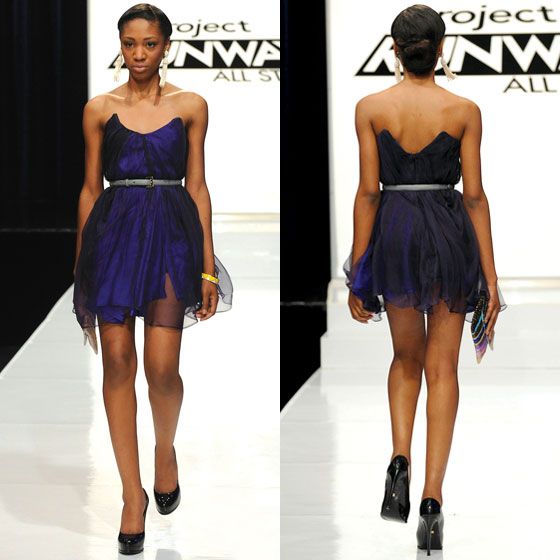 Had April just kept to her original sketch, she’d have likely been on track for something chic — but she never seemed to recover from not finding her original fabric choices in the mini-Mood “store.” The runway look she presented was neither chic nor clean-lined and the judges and April knew it; her elimination was particularly frustrating because everyone knew she could do so much better. Also, let’s officially retire the Halloween-themed critiques — for all this look’s flaws, there was nothing spidery about it. 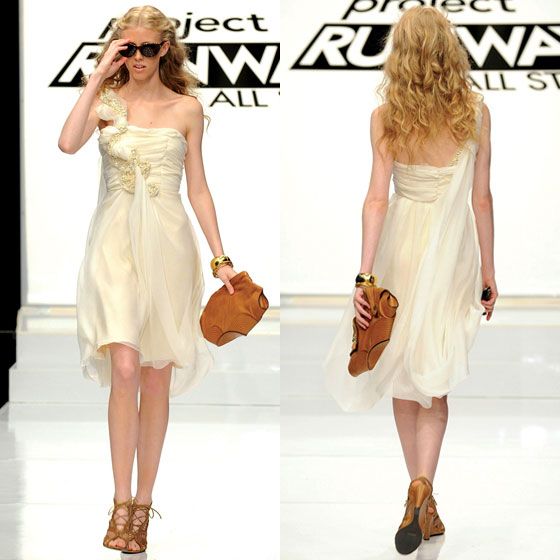 This is vanilla. Cute enough, and certainly not noticeably glue-gunned or otherwise unfinished. But this is a look far less interesting than even Austin’s workroom outfit of West Side Story–style bleached denim separates and tank top. Who’d like to discuss that instead? (And don’t worry, we’ll be getting to Rami’s tank top in good time.) 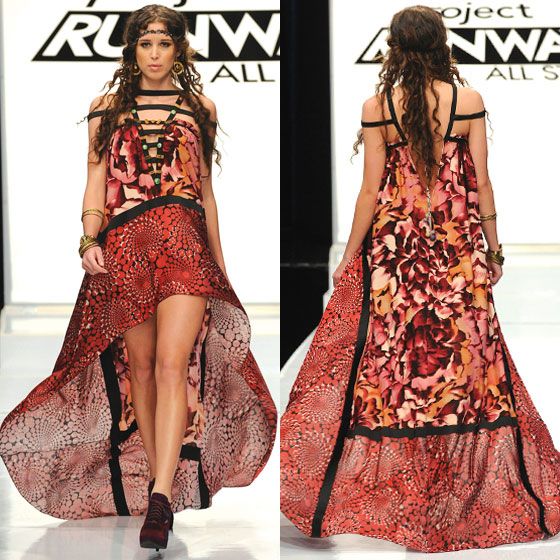 We’re not responding to Jerell’s one-note designs one bit this season — maybe it’s because his lack of variety pales in comparison to the range most of his fellow designers have been showing, and maybe it’s because he often just seems mean for the sake of it. True to his all-too-limited form, he mixed some prints together and whipped up a floaty maxi dress with a bunch of tacky beading stuck haphazardly around the neckline. Let’s be frank, even last season’s winner Anya did this better, and, yes, wait for it, she only started learning to sew four months ago. 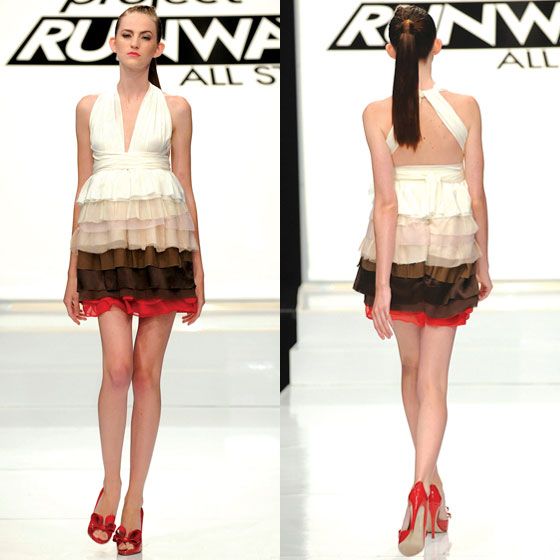 Kara’s earned a reputation with the judges for talking the talk, but not walking the walk — or at least, not having her model walk the walk wearing a successful design. If we didn’t know better, we’d think Sweet P had been hiding out in a sewing room closet these past two weeks and snuck back to switch Kara’s actual design for a second (better) stab at her terrible toweled sun dress. We’ve certainly seen this froufy style before on Runway’s runway. 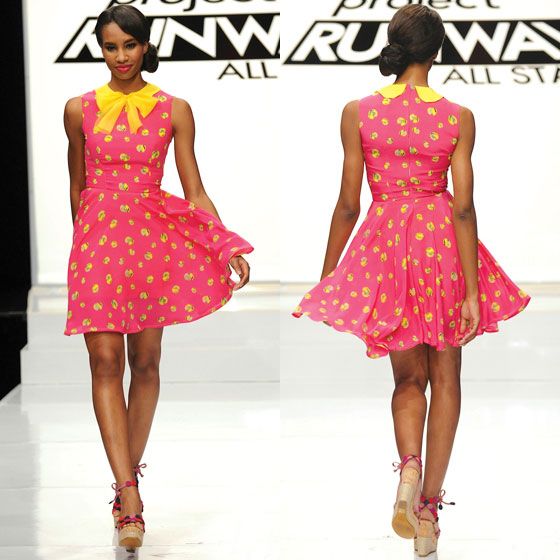 Kenley always makes her shrill, impassioned attitude known, but less evident here was the passion fruit inspiration in her retro-tinged little dress. But hey, it’s bright, the print works (take note, Jerell), and it’s finished very nicely indeed — arguably close to all you could hope for in less than five hours of construction time. 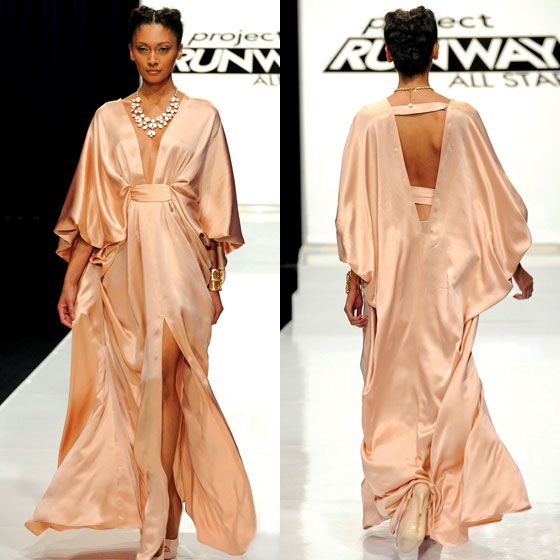 We look forward to seeing Miranda Kerr get lost in this billowy, salmon tent. Michael can somehow sew at warp speed, which clearly put him at a distinct advantage this week — but he also picked a very simple, drape-heavy silhouette that does the work for itself. (That’s smart, regardless of whether it’s simple enough for a chimpanzee to master.) But enough with the :O face Michael, please. It’s not cute, and it doesn’t seem realistic — other than for the moment when Diane von Furstenberg told you to call her, that’s a big deal, well, assuming she actually followed through and passed on her cell number. But really, flies will buzz into your mouth if it’s always so wide open. 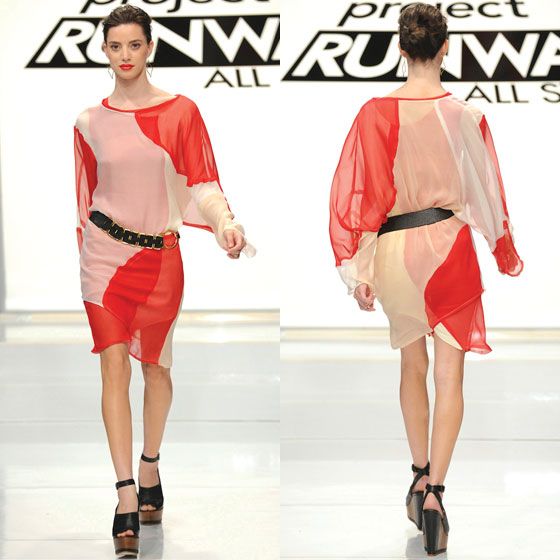 Yes, this is a Mila Hermanovski design without a single black thread visible. Her competitors were as shocked as we were, and maybe the judges were, too — they overpraised this look given what seemed to be sloppy seams across its many layered necklines and hems. (We were also surprised no one noticed the colors looked like toothpaste.)  But let’s not grouse too much, by which we mean we won’t mention the belt, only because Mila let some color into her life and seemed to blossom for it. 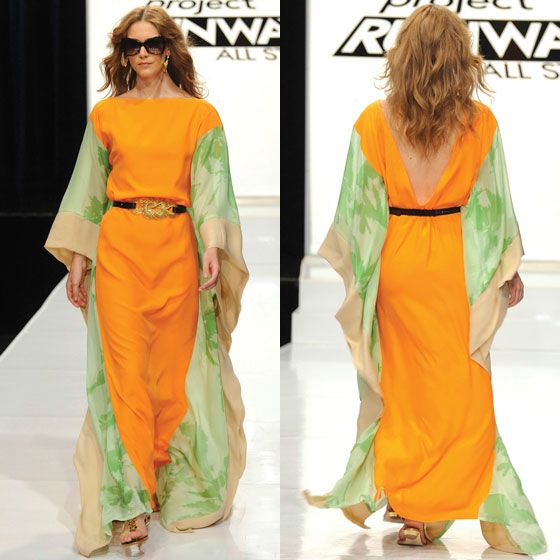 Cantaloupe! Cantaloupe served with a gaudy belt! What else needs to be said? 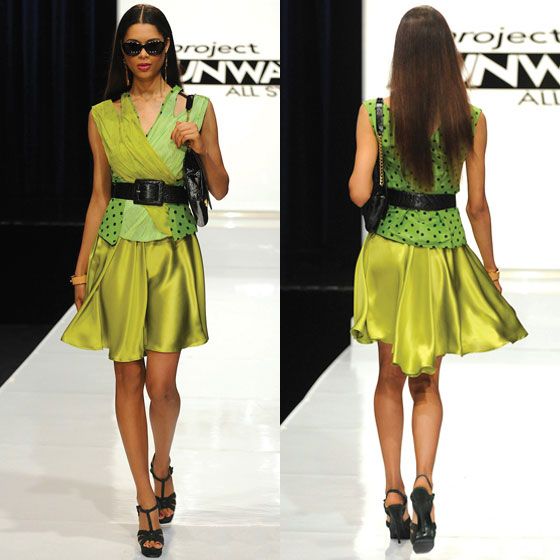 Rami got a pass last week for his use of questionable polka-dots given the Miss Piggy theme at hand. This time around though, there’s really no excuse — even though a kiwi has all those annoying little pips, the bold green and black-dotted pattern read very eighties, and not in the fun retro way Kenley’s look did. In fact, the whole look read outdated, cheap, and a bit too shiny. We’ll be kind and not get into Rami’s Mandee-tastic styling choices either.

the glow up 8:00 a.m.
Get Your Glitter Out: Party-Girl Chic Is Back Making the case for Y2K rebellion against “that girl” culture.
lawsuits Yesterday at 6:19 p.m.
Amber Heard Says She Thought Johnny Depp Would Kill Her Depp’s attorney tried to undermine Heard’s credibility during cross-examination.
internet drama Yesterday at 6:14 p.m.
Bobbi Brown vs. a TikTok Influencer It all started with a video of Meredith Duxbury trying the new Jones Road What the Foundation.