Katy Perry may be a polarizing figure in pop music, but whether you love her or hate her, you have to admit that the Dior couture runway look she wore to the Video Music Awards in August (that’s when Beyoncé publicly rubbed her bump of glory for the first time, for those of you who don’t remember this event by a “Katy Perry/Dior” reference alone) worked quite well for her. With another round of couture shows finished and the Grammys happening on February 12, Perry has to be planning some truly spectacular red-carpet looks to send her fans and future ex-husband Russell Brand a strong message about how fabulous she is. Since she had at least three outfits for the VMAs, she’ll need at least eighteen for the Grammys! We came up with ten, which you can view with her face Photoshopped into them in the slideshow.

This obviously has to be her first major red-carpet entry gown because it’s sure to make your eyes bleed and force you to imagine fancy licorice. 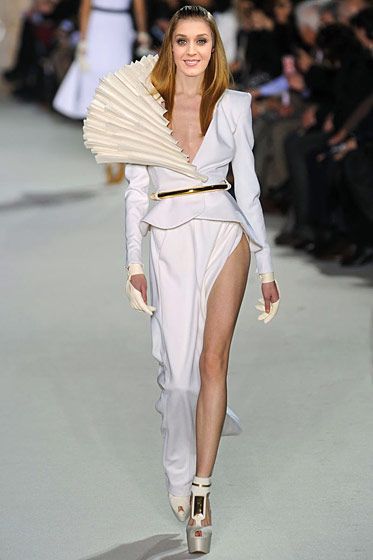 A perfect look for presenting an award, as the sculptural piece on her right shoulder will remind us, when the winner takes the stage, that Katy Perry has some seashell thing going on! Look at that! Etc. 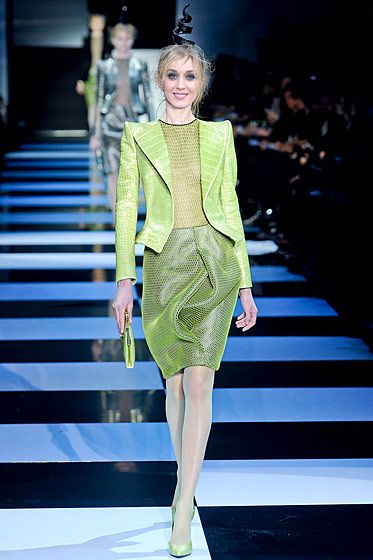 For a pre-Grammys press junket, this is an ideal daytime look, though she might want to comb her hair so as to avoid all “crazy divorcée” stereotypes. 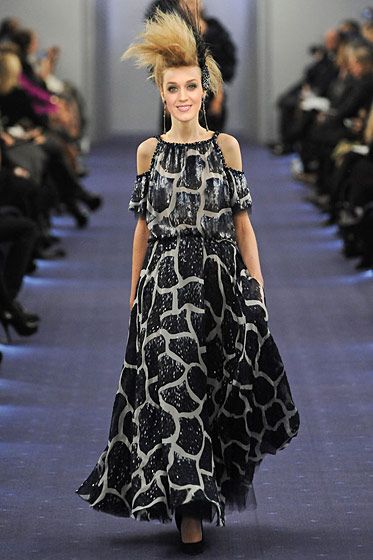 A fantastic option for a shot of Katy sitting in her seat at the ceremony. What it lacks in neon, it makes up for in gigantic-ness in the head area. 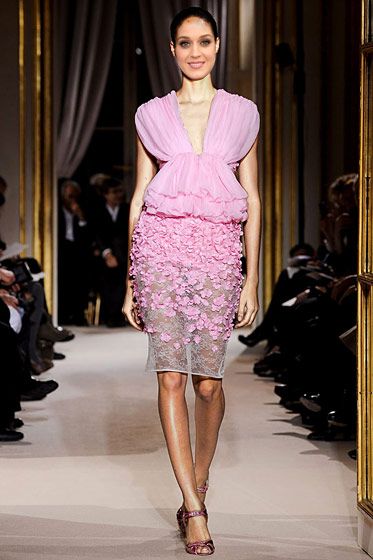 If you’re a pop star, you can’t perform or go onstage without gathering your dancers and band into a quick pre-show prayer circle, as everyone knows. So before she takes the stage and thanks God publicly, if she wins, she could enjoy a praying photo op in this “pop star goes to church”-appropriate number by Valli. 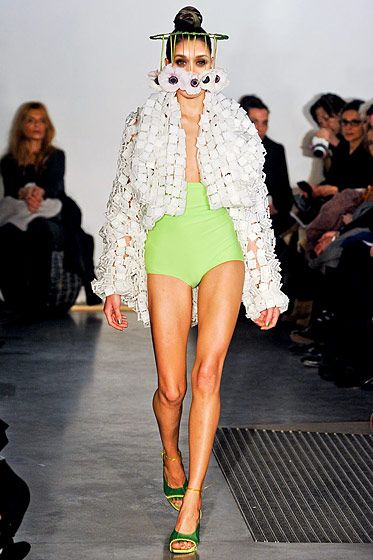 If she were performing, this would be perfect because it is already very naked but also comes with so many little pieces to rip away, like the baby mobile hanging on her head, and the complicated jacket. A jacket ripaway with this look would be a perfect time to reveal that she’s not actually topless underthere, but that she’s also got Swarovski crystal nipple pasties on. 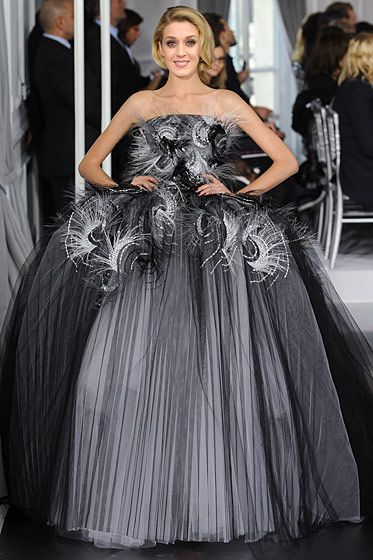 Another potential stage piece: The skirt opens, and glittery midgets run out!!!

The Oscar nominations may have already been announced, but it’s never too late for Ms. Perry to remind everyone she rocked it in The Smurfs. 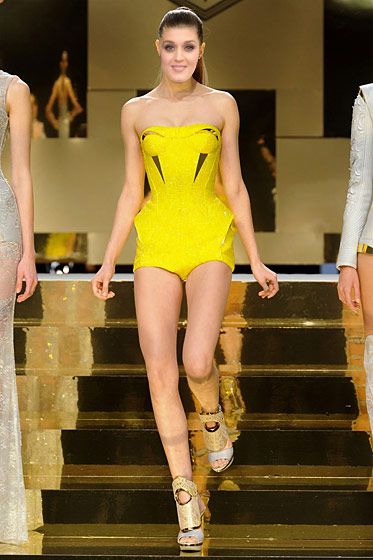 Despite this being couture, it’s not quite styled enough for Katy Perry. But fortunately the color is so strong that all it really needs is one of the tails from the Etro men’s show, and she’ll be ready to dance up onstage with Maroon 5 in a surprise duet. 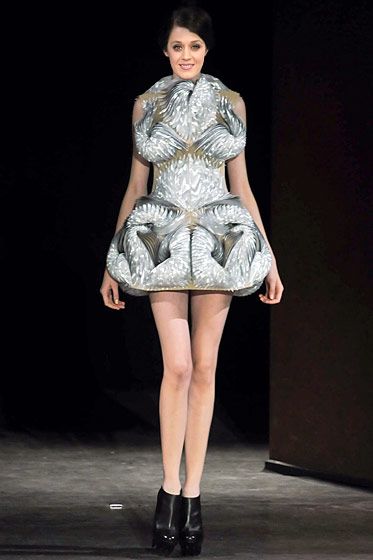 Great for when Katy makes her exit, because she can pull out a needle, pop her breasts, and spill confetti everywhere.

What Katy Perry Should Wear From Couture Week

your next move 12:52 p.m.
‘I Hate My Cushy Job. Should I Suck It Up or Just Quit?’ The answer is right there in the question.
q&a 12:34 p.m.
Bethann Hardison Looks Back on Her Life With a New Documentary The activist and model spoke to the Cut about premiering Invisible Beauty at Sundance and why she refuses to use the term “Black excellence.”
finally 12:09 p.m.
Do I Feel Sad for Tom Brady Now? Having lost everything to football, the quarterback is finally retiring for real.
health and wellness 12:07 p.m.
Naomi Watts Wants You to Talk About Lube “What kind of Dry January have you had … Dry AF … am I right?”
marketing? 12:03 p.m.
Lingerie Ad Compares Bra to … Ryan Reynolds? Harper Wilde has pulled a truly bizarre endorsement (?) of their product.
spring fashion 12:00 p.m.
Everyone’s Dissolving Their Pillowy Filler Faces The filler era has ended. Now, everyone’s scooping out their face.
By Sangeeta Singh-Kurtz
why is your skin so good 11:47 a.m.
How This YouTube Beauty Executive Gets Her Skin So Good Chanel Tyler isn’t dubbed “the glow expert” for no reason.
beyonce 9:51 a.m.
Hope You’ve Been Saving for Beyoncé Tickets The Renaissance tour dates are finally here.
love and war 9:01 a.m.
What ‘Feminist Tinder’ Promised Bumble set out to make dating better for women. Did it deliver?
By Sangeeta Singh-Kurtz
ask a beauty editor 8:00 a.m.
‘I Love That Lipgloss Is Back, But Are There Any That Actually Last? ’ These are the longest-lasting glosses, according to experts. Follow their application tips if you want better wear.
spring fashion 8:00 a.m.
The Cool Tang of Ice Spice Visiting with New York’s princess of rap.
By Danya Issawi
celebrity Yesterday at 6:15 p.m.
Ashton Kutcher Finally Addressed Danny Masterson’s Rape Trial He hopes his That ’70s Show co-star is “found innocent of the charges brought against him.”
rust Yesterday at 4:00 p.m.
Everything We Know About the Rust Shooting Alec Baldwin and prop armorer Hannah Gutierrez-Reed have been charged with involuntary manslaughter.
spring fashion Yesterday at 3:00 p.m.
Vitamins for Virgos, Candles for Capricorns Truly everybody wants in on astrology.
obsessive tester Yesterday at 2:50 p.m.
Your Guide to the Best Tinted Moisturizers Summer is a makeup mind-set.
By Ashley Weatherford and Chinea Rodriguez
skin deep Yesterday at 2:27 p.m.
Are At-Home Beauty Devices Even Worth It? Should you microcurrent, LED, and microneedle at home?
spring fashion Yesterday at 12:00 p.m.
The Oh-So-Popular Popcorn Dress How a stretchy, nubby bodycon dress with aughts-era Limited Too vibes became the post-pandemic go-to splurge.
By Allison P. Davis
what we know Yesterday at 10:43 a.m.
A Seventh Officer Has Been Suspended After Tyre Nichols’s Death: Updates The officer was relieved of duty the same day the five officers charged with murder were fired for the beating.
celebrity babies Yesterday at 10:24 a.m.
So What Did Adam Levine and Behati Prinsloo Name Their Baby? We’d all like to know.
health Yesterday at 10:00 a.m.
How Our Definition of Healthy Fails Black Women What I’ve learned in my years as a dietitian.
More Stories