Tony Melillo has worn many hats in the fashion industry, but above all, he’s a branding maven. Last week, he introduced his new signature label, a succinct collection of feather-light, high-end T-shirts called ATM, sold in its own small section at Barneys. ATM is the latest in a long string of Melillo’s ventures: After earning a CFDA nomination for NOVA, a casual sportswear label he started in the nineties, he sold the business and moved on to resurrect the label Generra in 2003. More recently, he struck gold in the lucrative world of celebrity branding. Today he runs Cynosure Holdings, a company he co-founded that develops celebrity-branded collections for the mass market. He’s currently the creative director of Selena Gomez for Kmart, and is working on a new venture with Vanessa Hudgens.

Melillo’s recent successes gave him the funds and creative energy to work on ATM, which he developed in addition to his day job (it’s named for his initials — Anthony Thomas Melillo — which are tattooed under his right bicep). Melillo is adamant that the nascent label will remain tightly f0cused and carefully packaged. “Tom Ford always told me that,” he explained, standing among the neatly arranged racks of T-shirts in Barneys in a white tee that falls just so on his muscular torso. “He was always saying, ‘What’s your point of view here?’ So I ask myself, ‘Am I veering?’”

Melillo has no ambitions to blow ATM into a full ready-to-wear label, nor to even move beyond T-shirts for the time being. “When I did that [with my previous lines], it was because buyers would ask from them. They’d be like, ‘Oh, where are your blazers?’” he said. “With this, I’m going to move at my own pace and be very specific.” For now, ATM is sold only at Barneys (indeed, he started the label at the encouragement of Barneys CEO Mark Lee, who’s an old friend), and includes three different types of cotton in just a handful of men’s and women’s styles, all priced from $58 to $82. Click through our slideshow to see his offerings. 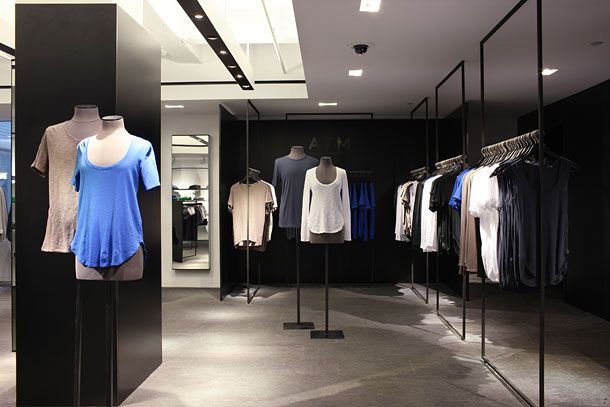 “Because ATM is a pet project, it wasn’t like, ‘I have to get this out and I have to sell it to 500 retailers and this and this.’ Nothing’s riding on it. And if it works, great, and if not, I have a collection of T-shirts I can wear because I know I’ll love them because I made them.” 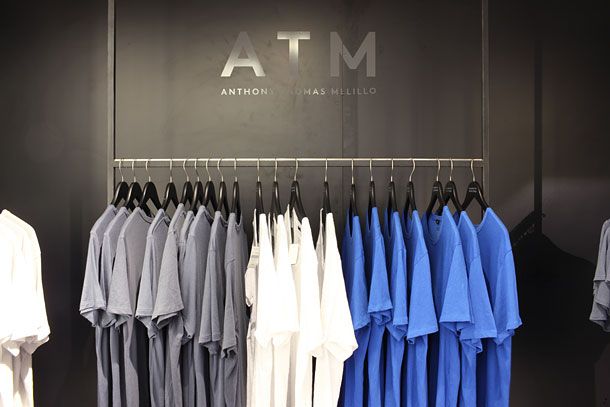 “I always find a way get out of wearing a dress shirt even if the dress code is black tie. It’s kind of inappropriate, but now that I have a T-shirt company, it’s the perfect excuse.” 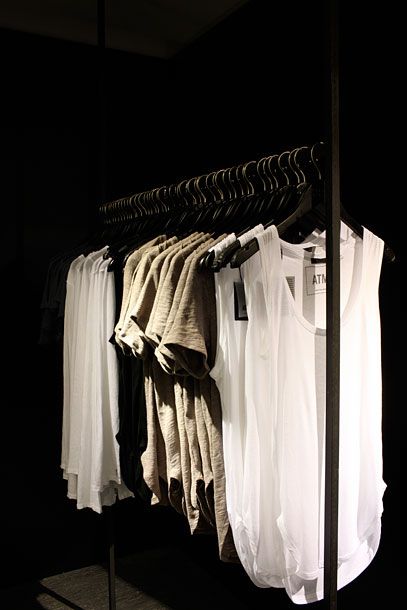 “We have three fabrics: the modal, the vintage jersey, and the slub. It’s all Peruvian cotton, and exclusively developed for us. It’s not like I invented the wheel here, but I was able to create the perfect slub, modal, and jersey for me. It took months of sending fabric samples back and forth, because I didn’t want to move forward with this until everything was right.” 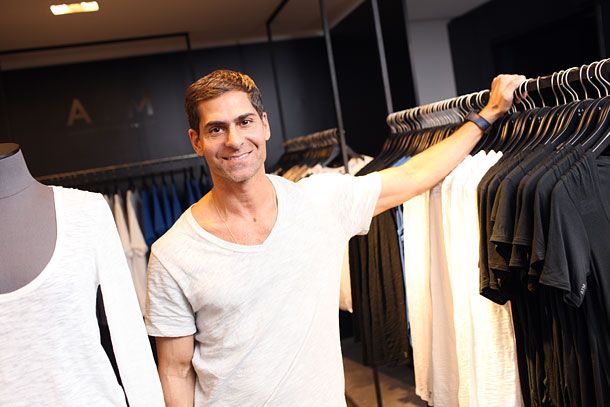 “My friends always tend to be T-shirt people. My very best friend is Kelly Klein, and I think we come from the same mold of casual dressing. It’s a definite look without being messy.” 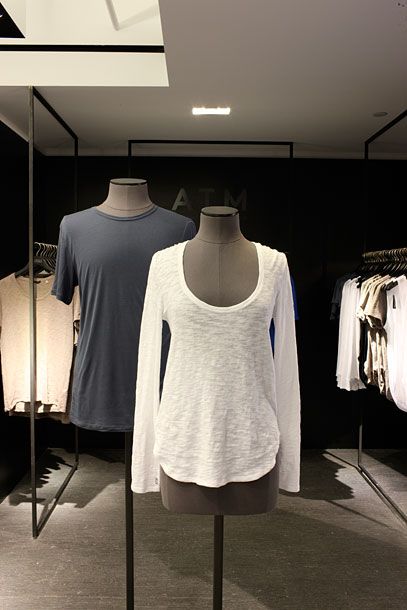 “You should be able to wear these every day and not be that girl who always wears T-shirts. People shouldn’t say, ‘That’s an amazing T-shirt you’re wearing.’ They should say, ‘This person’s got it together. She looks really good.’ If you have your few good pieces, that’s all you need.”

red pill or blue pill? Yesterday at 11:49 p.m.
Kanye Emailed Kim a Memo About Wearing Tiny Glasses “You cannot wear big glasses anymore,” he wrote.
recommendations Yesterday at 3:00 p.m.
We Should All Be Wearing House Shoes A foolproof way to avoid bringing a dustpan’s worth of dirt into your bed.
k-i-s-s-i-n-g Yesterday at 10:00 a.m.
Lexi and Fez, Sitting in a Tree Could this be Euphoria’s most unexpected romance?
buzz buzz buzz Yesterday at 9:00 a.m.
All Our Burning Questions From the Yellowjackets Finale Some of the biggest mysteries remain unraveled.
how i get it done Yesterday at 7:00 a.m.
How Milk Bar’s Christina Tosi Gets It Done “More colorful, more magical, and more rule-breaking.”
By Kristen Bateman
astrology Jan. 16, 2022
Madame Clairevoyant: Horoscopes for the Week of January 17 Aquarius season begins this week, and there’s a full moon in sensitive Cancer.
By Claire Comstock-Gay
sex diaries Jan. 16, 2022
The Mom Trying to Meet Her Online Boyfriend IRL This week’s sex diary.
celebrity Jan. 16, 2022
Britney and Jamie Lynn Call a Truce in Feud Over Claims in Jamie Lynn’s Book The latest in the ongoing Notes app saga.
kimye Jan. 16, 2022
The Ups and Downs of Ye’s Dramatic Weekend From a tell-all interview to the saga of Chicago’s fourth birthday party.
news Jan. 16, 2022
Everything We Know About The Texas Synagogue Hostage Situation The suspect has been killed, but a motive remains unclear.
vaccines Jan. 16, 2022
Australia Is Now Djokovic-Free Unvaccinated tennis star Novak Djokovic is out.
yellowjackets Jan. 15, 2022
Misty From Yellowjackets Is the Scariest Character on TV Beware the quiet ones.
culture Jan. 14, 2022
Jerry Harris Was Our Hero He was the most-loved cheerleader on Cheer’s premiere season. Season two charts his downfall.
friday sales Jan. 14, 2022
19 Things on Sale You’ll Actually Want to Buy: From Aesop to Crocs Including a dog collar that’s rarely on sale and one of our favorite portable speakers.
beauty Jan. 14, 2022
How Gym Culture Went From Punishing to Meditative People are starting to insist that exercise focus on mental health, not be an obligatory regimen that will change the way they look.
celebrity Jan. 14, 2022
Neve Campbell Was Once Attacked by a Bear on a Movie Set “They said dip your hand in honey and just run.”
bffs Jan. 14, 2022
In Yellowjackets, Female Friendship Is Horrific That’s why I like it.
celebrity Jan. 13, 2022
Britney Spears Accuses Jamie Lynn of Using Her to Sell Books Yes, she’s seen the GMA interview.
celebrity couples Jan. 13, 2022
Julia Fox and Ye Aren’t Doing Labels, Because of Course Not And they’re definitely not a PR stunt, says Julia Fox.
what the what Jan. 13, 2022
I Joost Loove Joots Both Julia Fox and Kim Kardashian wore “pantaboots” in the same week.
More Stories