Armfuls of bangles, statement sunglasses, and artfully mismatched prints dominated the street-style photographs last September, but a new season calls for shiny new things.  Being a street-style star requires changing it up each Fashion Week to keep the photographers interested, so expect to see the likes of Taylor Tomasi Hill, Hanneli Mustaparta, and Shala Monroque breaking out the items that they’ve been hoarding in anticipation of a splashy debut.  While the Miu Miu glitter booties were one of the most photographed items last fall, Prada’s flame heels are likely to be the breakout stars this time around. Neon bags are likely to make another appearance, in the form of Celine’s eye-searing bright totes from resort. And rather than an armful of bangles, statement jewelry like Givenchy’s shark-tooth necklace will be the detail shot of the week. Click through to see the top ten pieces that will bait the likes of Tommy Ton and the Sartorialist next week.

Clearly, these have been on the top of every editor’s wish list since they hit the runway. Basically every fashion magazine in existence has devoted a full-page glamour shot to them. The combination of flames and whimsical tail lights will have the photographers clamoring for detail shots.

While open-toe shoes are great for the attendees who have the luxury of car service to and from the shows in this chilly weather, the mere plebes who are fighting for cabs need a little more coverage. Gold-plated loafers are flashy enough to be spotted from three rows away, but remain seasonally appropriate. It is February, after all.

After countless seasons of angry jewelry in the form of spikes, skulls, and talons, fashion is embracing a rare “pretty” moment with softer jewels. Expect to see more feminine flourishes on the normally clad-in-all-black fashion crowd. 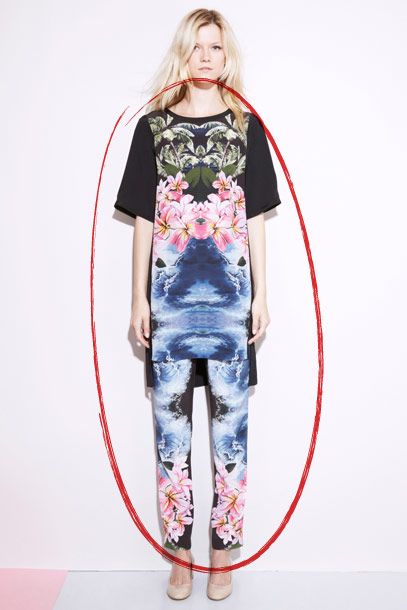 Demonstrating the ability to mix prints has been established as a surefire way to get yourself snapped but a head-to-toe bold print says you’re not afraid to make a statement.

It’s no secret that the fashion world loves Phoebe Philo. While Zara and ASOS have produced their own spin on this standout look, the real-deal debut is sure to happen during Fashion Week.

Prada’s pretty and feminine jewelry will undoubtedly be the star of the season, but for the contingent of editors who feel compelled to remain true to their tough and edgy aesthetic, this possesses just the right amount of transgressive appeal. This has Kate Lanphear written all over it. 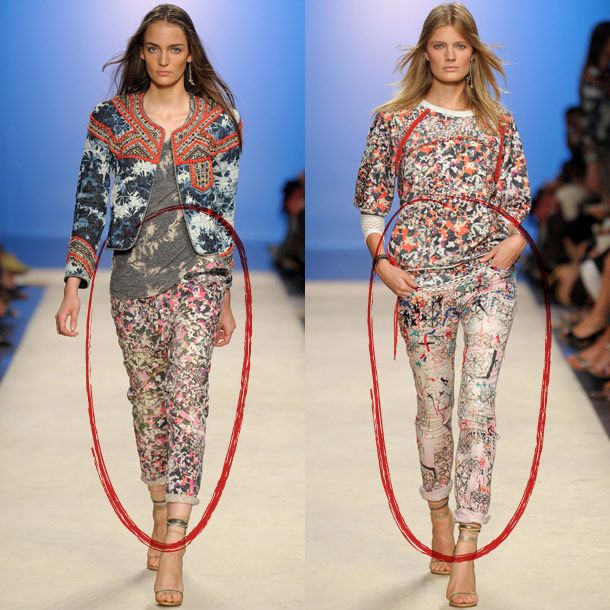 Marant’s Southwestern-inspired fall collection was snapped on a bevy of show attendees last September, and her brand of effortless sex appeal is going to be just as popular this spring. A casually cuffed pair of printed jeans paired with heels has that thrown together “why, this is my personal style” vibe that comes across as appealingly aloof in pictures. 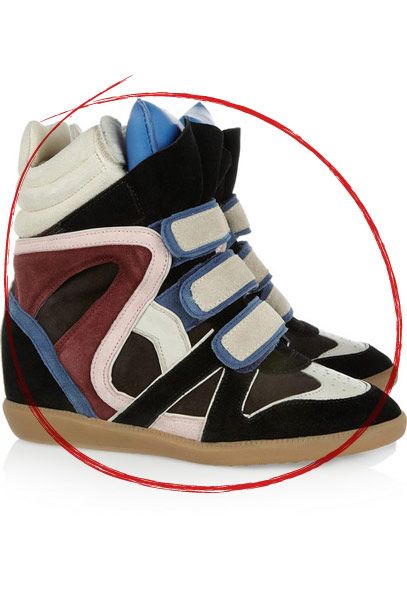 Tommy Ton proclaimed sneakers the unlikely trend of 2011 and it shows no signs of abating. This pair has already sold out on Net-a-Porter, but it’s not just Marant’s kicks that will be popular — Marc by Marc’s striped sneakers, Margiela’s classic gum-soles, and Lanvin’s diamond-printed trainers are just some of the high-end options that might pop up. 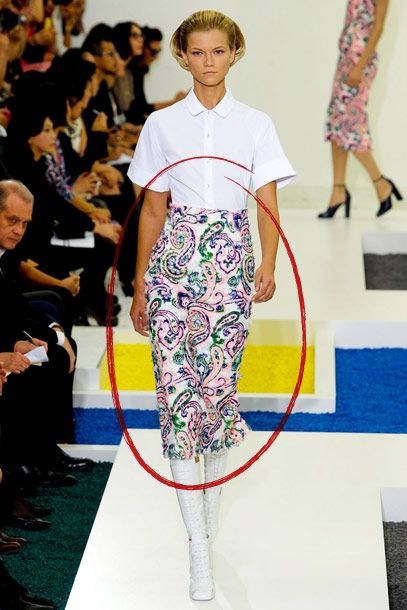 Garance Doré predicted last September at the Jil Sander show that front-row favorites would be wearing the embellished paisley pencil skirt come February. When a noted street-style photographer places her bets on a particular piece, it’s pretty much a done deal. 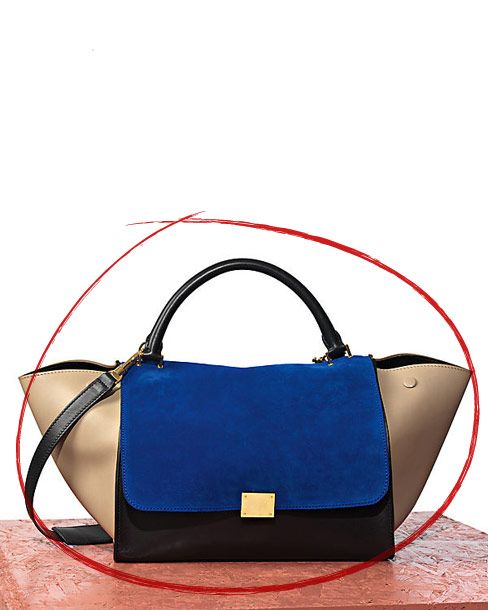 Céline bags couldn’t be more popular at the moment, and Philo’s color-blocked batwing styles have become a major accessories trend. This particular one, the Trapeze, will surely be spotted on many showgoers, but don’t count out the classic Luggage totes and Box bags. They come in fluorescent shades for resort and no photographer can resist a splash of neon.

what we know 1:20 p.m.
These Are the Names of the Uvalde School-Shooting Victims Nineteen kids and two teachers are dead after a gunman opened fire on a Texas elementary school on Tuesday.
what we know 1:13 p.m.
New Details Emerge About the Texas School Shooting The gunman barricaded himself in a fourth-grade classroom for an hour or more.
uvalde 1:09 p.m.
What We Know About the Police Response to the Uvalde Shooting After a gunman opened fire on a Texas elementary school, questions have arisen about what officers on the scene did to stop him.
uvalde 12:50 p.m.
“It’s One of the Biggest Fears of My Life” After the Uvalde shooting, a Columbine survivor dreads sending her daughter to preschool this fall.
gun control 12:33 p.m.
The NRA Will Still Hold Its Conference in Texas This Weekend Ironically, attendees will not be allowed to bring guns to the event.
power 11:47 a.m.
States Are Scrambling to Restrict Abortion Access With the Supreme Court expected to rewrite abortion rights, conservative states are advancing increasingly extreme bans.
life after roe 11:12 a.m.
10 Women on Getting an Abortion in the End Days of Roe “It felt like an insult to have to read that my fetus is the size of corn.”
uvalde 10:00 a.m.
‘Who Are the Bad Guys?’ It’s the question my children asked. My answer: the moral cowards who slobber and grovel over money from the gun lobby.
By Kathryn Jezer-Morton
action item 9:30 a.m.
How to Help the Uvalde Community From supporting Robb Elementary School families to pressing for gun-control legislation.
sports! 8:00 a.m.
This Advice from Elite Runners Will Inspire Even Non-Runners Running advice for your entire life.
style 8:00 a.m.
Hey Fashion Friend: I Need Summer Sandals That Won’t Give Me Blisters Hopefully these 18 pairs won’t destroy your feet.
By Emilia Petrarca
books 8:00 a.m.
The Sad Young Literary Man Is Now a Middle-Aged Dad Keith Gessen wrote a memoir about family life. His wife, Emily Gould, is mostly okay with that.
By Elizabeth Weil
gone sale-ing Yesterday at 5:28 p.m.
Here’s My Designer-Sunglasses Shopping Secret I never pay full price.
lawsuits Yesterday at 5:18 p.m.
Kate Moss Says Johnny Depp Never Pushed Her Down a Staircase Testifying in Heard v. Depp, the model denied the rumor.
uvalde Yesterday at 4:47 p.m.
The Children Are No Longer Our Future So now what?
By Brittney Cooper
i tried it Yesterday at 4:00 p.m.
Okay, Fine, Journaling Kind of Works After years of carrying around an empty notebook, I finally forced myself to write down my weirdest, dumbest thoughts.
texas school shooting Yesterday at 2:10 p.m.
Beto O’Rourke Confronts Greg Abbott Over Shooting: ‘This Is on You!’ The Democratic candidate for governor interrupted a press conference about the elementary-school shooting before he was pulled away by security.
texas school shooting Yesterday at 1:18 p.m.
‘We Can’t Get Numb to This’ Basketball coach Steve Kerr expressed how many are feeling after the Texas elementary-school shooting: exhausted and angry.
your next move Yesterday at 1:00 p.m.
‘How Can I Convince My New Boss That I’m Ready to Be a Manager?’ The arrival of a new boss means having a clean slate at work, especially if they’re an external candidate. So position yourself as an asset to them.
survivors Yesterday at 1:00 p.m.
Stop Forcing Me to Endure the Horror of Depp v. Heard The defamation trial against Amber Heard by Johnny Depp has turned abuse into online entertainment. For survivors, it’s shattering.
More Stories