We know them all on a first-name basis: Cindy, Naomi, Christy, Linda, and Kate. Their work has shaped the modeling industry, starting with Evangelista’s hand-over-eye Harper’s Bazaar cover, Moss’s youthful grin on the Face, and Campbell’s groundbreaking French Vogue booking, which made her the first black model to bag the gig. Unsurprisingly, these very same ladies continue to land cover after cover. Most recently, Claudia Schiffer had fun in a sunhat for British Harper’s Bazaar, Kristen McMenamy let down her mane of gray hair for Love, and Eva Herzigova tugged at her lapels for Spanish Marie Claire. We gathered some of the supermodels’ legendary covers along with their high-profile ones of late — take a look at how much better they’ve gotten over the years. 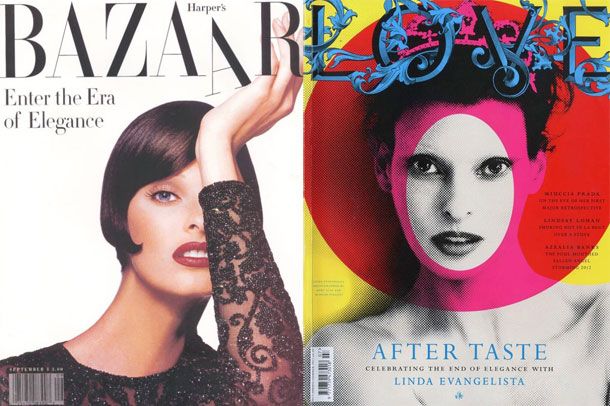 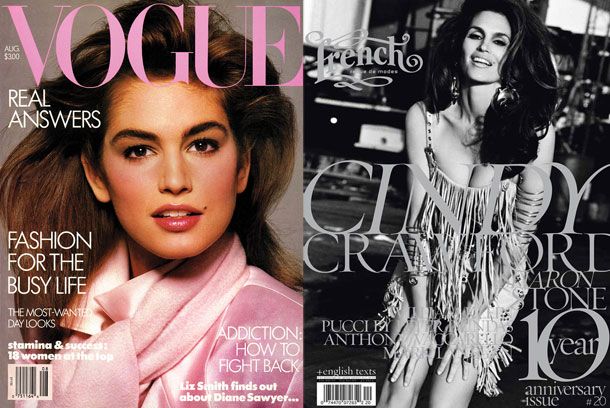 Before Revlon, Pepsi, and House of Style, Cindy kickstarted her career by landing the Richard Avedon–lensed cover of Vogue at age 20. The mogul fronts the current issue of French Revue de Modes. 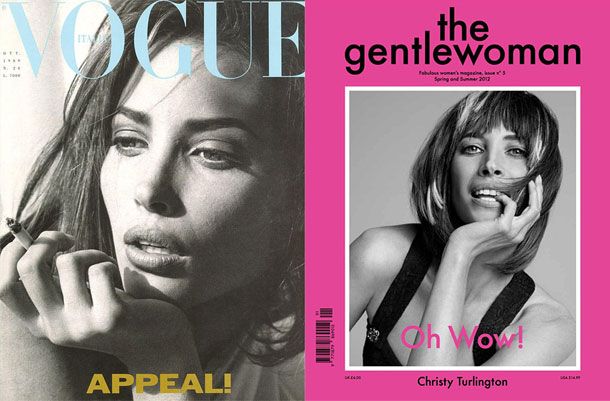 In the eighties, Steven Meisel shot her for Italian Vogue’s October 1989 issue. This year, Inez and Vinoodh photographed Turlington in a similar pose (without cigarette, though!) for the Gentlewoman. 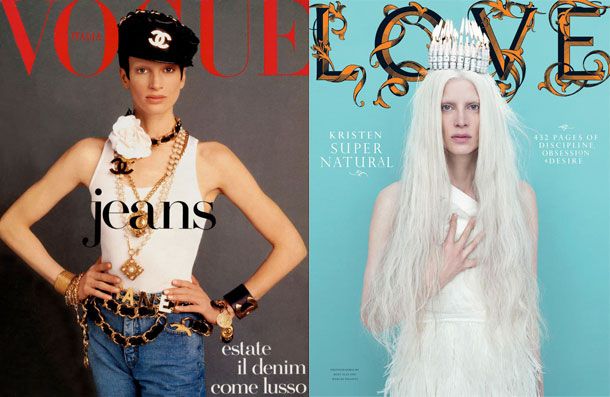 It doesn’t really matter if Kristen McMenamy has a short, black bob or a long, white mane; she takes one helluva compelling picture two decades after her iconic Italian Vogue cover. 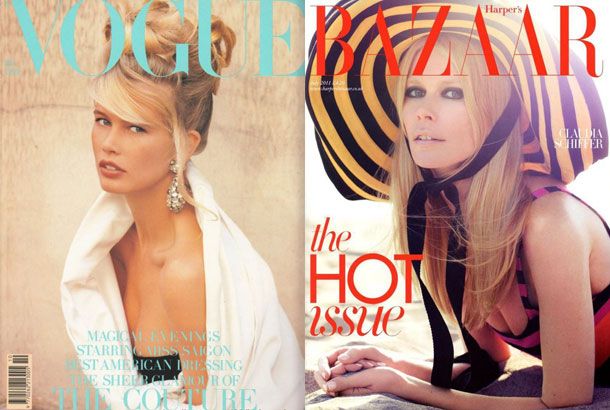 Can someone explain how Claudia Schiffer maintained her coquettish sex appeal after all these years? Further proof: her just-released Guess campaign. 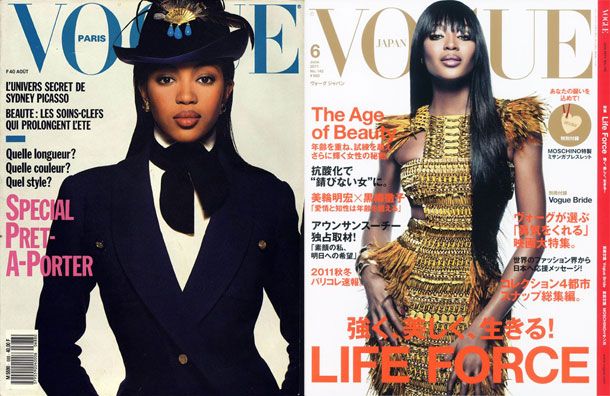 Dear Naomi,   While you look all sorts of adorable at age 18 on the cover of French Vogue’s first-ever cover featuring a black model (represent!), we kind of prefer the golden girl seen on Japanese Vogue.   Love always, The Cut 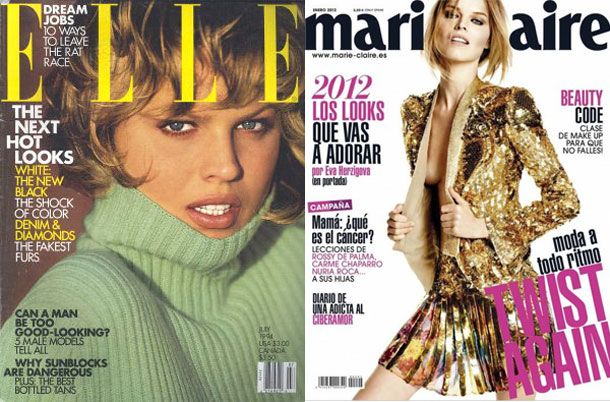 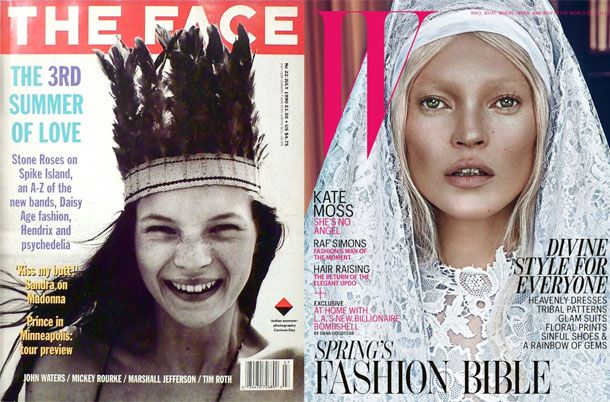 In our eyes, Kate the Great can do no wrong. Fin.

The Best of Supermodels’ Magazine Covers

succession 7:54 p.m.
Let This Brian Cox Quote Be Your Guide The Succession star is “too old, too tired, and too talented,” and, honestly, same.
tv 6:23 p.m.
Here’s Sebastian Stan on Filming With an Animatronic Penis The actor had a one-of-a-kind experience filming Pam & Tommy.
valentine's day 3:11 p.m.
58 Gifts for the Person You Love They deserve the world, but these picks will work too.
celebrity 1:59 p.m.
Finally, Something Bono and I Can Agree On He is apparently embarrassed by “most” of U2’s music.
news 1:56 p.m.
Cardi B Offers to Pay Funeral Costs for Bronx Fire Victims Last week’s apartment fire left 17 people dead and over 60 injured.
self 1:15 p.m.
I’m Tired of Explaining Why I Don’t Drink We have to expand our language beyond “sober.”
By Sarah Wood
remembrances 12:39 p.m.
The Fashion World Remembers André Leon Talley Designers, writers, and celebrities paid tribute to the inimitable fashion icon, who died on Tuesday at 73.
vampires 12:08 p.m.
Megan Fox’s Engagement Ring … Bites? “The bands are actually thorns. So if she tries to take it off, it hurts.”
celebrity 11:03 a.m.
Tracing the Ongoing Feud Between Britney and Jamie Lynn Spears Things spiraled out after Jamie Lynn went on Good Morning America to promote her new book.
style 9:35 a.m.
Anna Wintour Remembers André Leon Talley The Vogue editor mourned her friend and former colleague, calling him “a brilliant and compassionate man.”
in memoriam 8:33 a.m.
André Leon Talley Has Died The former Vogue creative director and editor passed away unexpectedly this week at the age of 73.
culture Yesterday at 8:10 p.m.
There Really Is a Coordinated Online Attack on Meghan Markle A new analysis found that the Duke and Duchess of Sussex were the targets of a strategic, monetized social media campaign against them.
euphoria Yesterday at 6:31 p.m.
8 Pieces You Can Shop From Episode 2 of Euphoria By Kim Shui, Réalisation Par, Nodaleto, and more.
fashion Yesterday at 6:24 p.m.
All Signs Point to a Big Year Ahead for Aimé Leon Dore The cult menswear brand has a New Balance collection in the works and LVMH money in its pocket.
engagements Yesterday at 6:13 p.m.
What Is Machine Gun Kelly Hiding? The story of his proposal to Megan Fox isn’t adding up.
the grammys Yesterday at 4:56 p.m.
The Grammys Are Back On The awards show has been pushed to April — and will now take place in Las Vegas.
health Yesterday at 4:45 p.m.
Everything to Know About Rapid At-Home COVID-19 Tests Americans are finally eligible to receive free rapid tests.
power Yesterday at 2:09 p.m.
The New York Post Gets Its Own Tabloid Scandal A former top editor sues, saying the paper’s notorious former boss was welcomed back after sexually harassing her.
By Shawn McCreesh and Angelina Chapin
movies Yesterday at 2:00 p.m.
Daniel Radcliffe, We Are Ready for Your Music Career The actor will be portraying Weird Al in an upcoming biopic.
the bigger picture Yesterday at 1:34 p.m.
Wrestling Has a Dark Side. But for Some, It’s a Safe Space. Photographer Sofie Vasquez spent a year traveling the country, documenting the indie-wrestling scene.
By Bindu Bansinath
More Stories