The most popular adjective for Lindsay Lohan’s latest SNL performance seems to be “lukewarm,” which can also be applied to her wardrobe choices for the show. But assuming that Lohan’s main objective was to prove that she’s not a gigantic mess these days, her outfits could even be called a success. The four dresses she wore when she wasn’t in costume were simple, safe, and almost even ladylike. Sure, they were all tight, but they didn’t show cleavage and most of them had sleeves. Since Lindsay needs to prove that she’s marketable once again (hell, insurable would be a good place to start), wearing inoffensive, every-woman-esque outfits was a good move for her. Then again, she may not have had much choice in what to wear — how many designers are really willing to lend her clothes these days? Click through our slideshow for an analysis of her four looks. 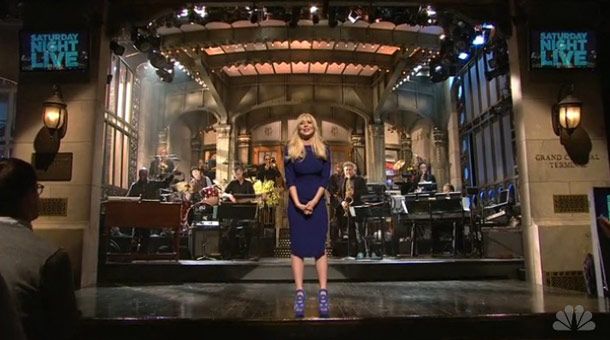 Lindsay opened the show in a tight blue dress with a below-the-knee hemline and three-quarter sleeves. It was practically Kate Middleton-esque, at least in terms of skin-coverage, until she turned to her left to show a high slit up her left leg. Designer-wise it’s pretty difficult to identify (it could be this Antonio Berardi dress, but it’s hard to tell), which is probably a good thing – wearing anything too trendy or recognizable might remind people of her disastrous attempt at high fashion “design,” which didn’t do her acting career any favors. She also wore these Giuseppe Zanotti heels, which were the only noticeable accessory she wore all night. 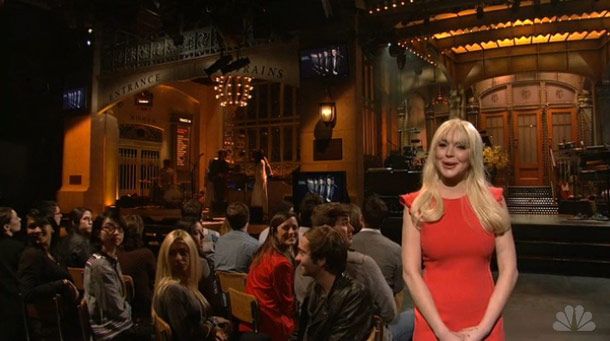 This is probably the best dress she wore all evening, which is too bad because we only saw it on-air for about three seconds. Again, she stuck with a high neckline and clingy fit, but the sculptured shoulders added some flattering structure. This was also the least-tight dress she wore, unlike … 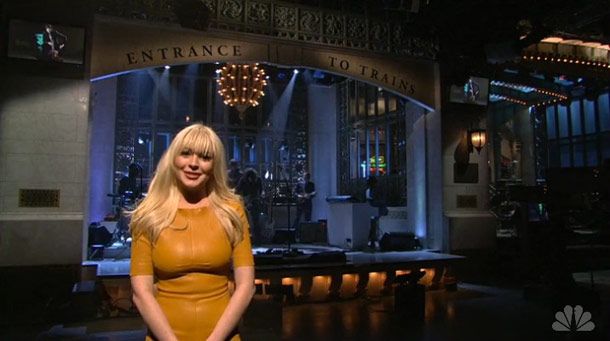 … this dress, which was definitely the tightest and also the worst (note to EVERYBODY: studio lighting and shiny mustard-colored leather shouldn’t mix, period). This dress only appeared on air for about three seconds, too, and hopefully Lindsay didn’t have to wear it for long, since she looked like she was suffering from Spanx-induced suffocation. 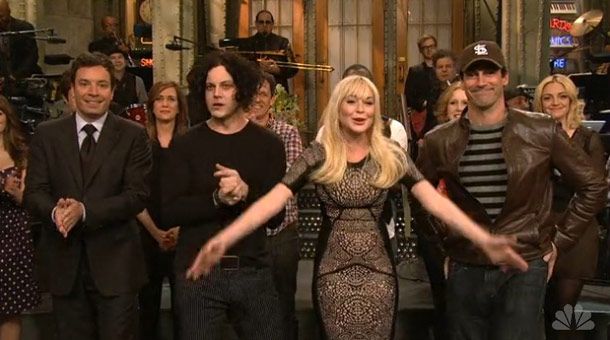 It’s an illusion dress (also known as a “thin dress”) – how on-trend of her! And again, it probably would have looked nicer if she’d ordered up a size, but overall it’s still flattering. This was probably the “riskiest” outfit she wore all evening, mainly because it more closely resembled something one would wear while dancing on a bar (or throwing French fries across the banquettes at the Boom Boom Room). Luckily for all of us, Lindsay did neither of those things that night.

breakups 6:27 p.m.
Michelle Branch Files to Divorce the Black Keys’ Patrick Carney She took the step a day after announcing their split online.
celebrity weddings 5:44 p.m.
Bennifer Is Getting Married (Again) The follow-up party to their small Vegas wedding is happening this weekend in Georgia.
celebrity 5:13 p.m.
Bella Hadid Isn’t Afraid to Speak Out About Palestine Anymore The model said many companies have stopped working with her following her advocacy.
hairy situations 5:00 p.m.
The Best Dandruff Shampoos for Every Kind of Hair From curls to color-treated.
By Asia Milia Ware, The Cut, and Chinea Rodriguez
wtf 1:38 p.m.
Bryce Dallas Howard Confirms Huge Pay Disparity on Jurassic World “I was paid so much less than the reports even said.”
celebrity 12:46 p.m.
Adele Says She ‘Might As Well Be Married’ to Rich Paul “I’m not engaged. I just love high-end jewelry, boy!”
cut covers 12:08 p.m.
Amandla, Amandla, Amandla The Bodies Bodies Bodies star is the Cut’s July-August 2022 cover star.
By the Cut
gross! 11:56 a.m.
Who Told the GOP About ‘BDE’? A gubernatorial candidate claims Ron DeSantis has it. Of course he doesn’t.
obits 10:04 a.m.
Anne Heche Has Died at 53 The actor suffered severe injuries after a car crash in L.A. earlier this month.
flying high 10:00 a.m.
The Ultimate Celebrity Perk? Climate Disaster. The Twitter account @celebjets gives us insight into Kylie Jenner’s 17-minute flights.
power 10:00 a.m.
Everything to Know About the WNBA Star in Russian Custody Amid ongoing prisoner-swap negotiations between the U.S. and Russia, Brittney Griner’s legal team has appealed her conviction.
garment district 8:00 a.m.
How to Be a Fashion Designer: Sewing Not Required Oluwole Olosunde’s curriculum offers a wide-ranging crash course on the fundamentals of building a brand in the Instagram era.
how i get it done 7:00 a.m.
How Kerry Washington Gets It Done “I’m not good at compartmentalizing and only bringing part of myself into a room.”
By Faith Cummings
astrology Yesterday at 8:30 p.m.
Madame Clairevoyant: Horoscopes for the Week of August 15 As Mars enters mercurial Gemini, you may find yourself easily distracted. Fighting it will only make it worse.
By Claire Comstock-Gay
sex diaries Yesterday at 8:00 p.m.
The Artist Who’s Not Sure She Loves Her Comedian Boyfriend This week’s sex diary.
r. kelly Yesterday at 5:47 p.m.
R. Kelly Denies One of His Alleged Victims Is Pregnant With His Child After identifying herself as the singer’s fiancée, Joycelyn Savage claimed she’s pregnant with his child.
rip Yesterday at 3:51 p.m.
Freya the Walrus Was Too Good for This World The summer icon has been euthanized by Norwegian officials.
rust Yesterday at 1:40 p.m.
Everything We Know About the Rust Shooting An FBI report concludes that the trigger must have been pulled.
shopping Aug. 12, 2022
The $6 Brow Product That Changed My Eyebrows It took me almost a decade to find the perfect brow product.
fashion Aug. 12, 2022
Julia Fox Is Back! And she is giving us the latex looks we’ve been so thirsty for.
More Stories