Right on schedule, this week presents another late-game “avant-garde” challenge for the final five All-Stars. Of course, understandably, they’re all far too worn down by the Runway grind to do anything particularly innovative — season after season, the producers don’t seem to notice this. (Or perhaps they do, and realize they’re just nudging the almost-finalists closer and closer to histrionics.) This time, the designers must incorporate neon lighting, fairy lights, and other fiber optics into their garments, so their runway looks flash and glow in the dark as they walk for the judges.

This meant double the shopping trip–themed “fun,” first at a special lighting store, and then at Mood. Kenley goes $400 over budget on fairy lights and cables, and somehow her sparkling personality doesn’t elicit the discount she needs. (In fact, she can’t even get the lighting store’s owners to knock $6 off her $300-plus purchase.) Back in their workroom, it’s not long before Joanna arrives for crits — but it’s still long enough for Michael to change his design, oh, say, six or seven times. She cautions him to avoid unfinished and unrefined details in his rushed look(s), but also warns Austin not to go too romantic, and Jerell not to end up with fringed pieces too reminiscent of a Christmas tree. None heeded her advice — an unfortunate mistake for two of the three designers.

Outside the studio (yes, somehow the designers manage to find time for breaks), there’s a “meet the family” moment when Austin Skypes his Mom — his first time using the computer program. This makes sense, we suppose, because we like to think Austin communicates in long, calligraphic poems written on scented parchment in sky-blue ink, rolled and tied with delicate scraps of vintage silks, and sent via violet-colored doves trained like carrier pigeons. He’s just so romantic and old-school like that. That aside, it’s sad news for Austin: His Mom’s house has been foreclosed upon. We’re left wondering why such a ploy for Austin-themed sympathy would be edited into an episode so late in the season? (Dare we say it doesn’t bode well for his placement as one of the inevitable finalists?)

After those tears, there’s the obligatory series of snarky confessionals (as usual, the designers mostly think each other’s work sucks) and then it’s time for the runway, which we noted this week takes place back at Parsons, a few blocks away. Do the models get some runway practice on their walk there? Or do they have fun squeezing themselves and their oversize peplums into cabs instead? We’ll never know. However they make the journey, they arrive, the lights dim, and the five looks shine.

Kenley’s Minaj-esque look and Austin’s whimsical starscape get the highest scores from the judges, and Austin squeezes out another win. Jerell’s tribal grandma and Michael’s arcade-game ninja fall into the bottom two spots. This means, yes, Jerell takes the fall — because Michael’s definitely finale-bound. And with Mondo and Austin looking close to unbeatable, given their respective runs this season, things aren’t looking good for Ms. Collins next week. 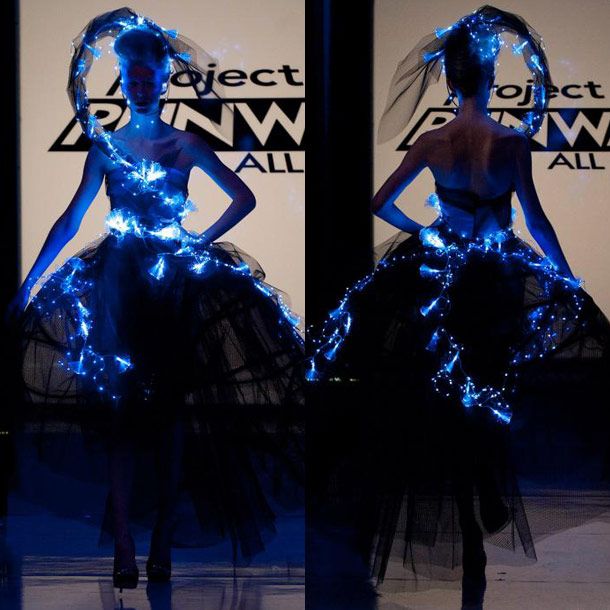 Gosh, Isaac must have been so annoyed he already threw that “Austin Starlet” pun out a few weeks ago when he saw this look walk. It’s little more than a sculptural tulle dress (an Austin Scarlett classic) with fairy lights draped on top, but compared to the garish excess elsewhere, celestial refinement deservedly won out. 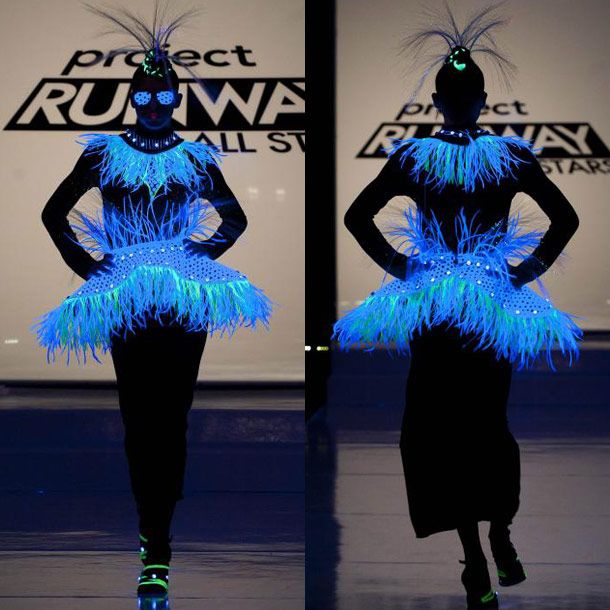 Of all the designers this week, Jerell certainly attacked this challenge with the most gusto — incorporating actual lighting (and an actual bulb even, in his model’s mouth) much more so than any of his competitors. Look what it got him: an auf’ing. From early in the design process, Jerell seemed to know his look would end up “either fabulous or fugly,” and, well, it’s pretty evident which F-word won out. (The sunglasses were great though, and totally appropriate for a Pharrell-esque music video.) 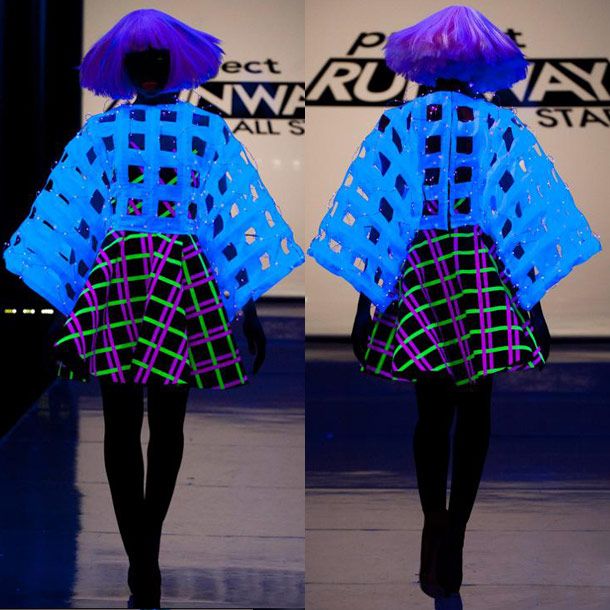 Of the four futuristic outfits presented this week, Kenley’s design looked light years ahead both in terms of its style and its finishings. (Yes, that might be because she makes similar skirts each week, but still.) Her use of neon tape was quickly copied in the workroom, but not to such great, graphic success; even up against the winning look, we’d argue her use of fairy lights had a better effect — adding fluidity and accentuating the draping in a jacket just nicely reminiscent of a cyber-prison’s straitjacket. 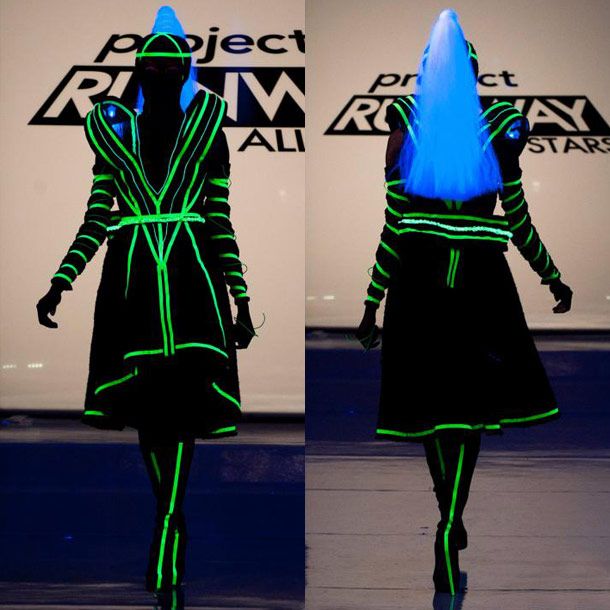 If you listened very carefully while the judges critiqued this look, you could hear whispers of “Halloween ninja” this and “crazy, techno lady who offers you pills at an eighties rave” that, as if the ghost of Michael Kors just couldn’t hold back. And when the TRON remake’s costume department call to get for their samples back, it won’t just be Mondo’s design they’re asking for, it’d be this, too. 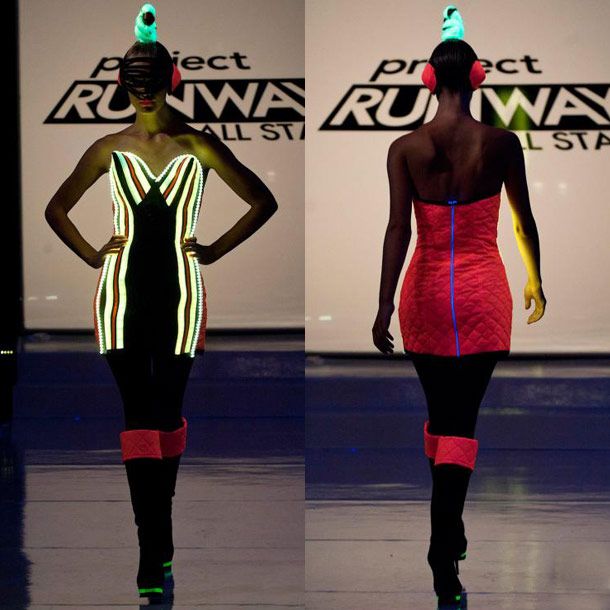 Why does Mondo’s model have a glow-in-the-dark maggot coming out of her hat? This half-hearted look presents other questions, too, but certainly none nearly as pressing as this one.

in her shoes podcast 1:01 p.m.
Put Tamera Mowry-Housley in All the Hallmark Christmas Movies  The actress and host joins this week’s episode of In Her Shoes.
By the Cut
your next move 12:44 p.m.
‘I’m Homesick. How Do I Convince My Boss to Let Me Move to Another City?’ If you truly want to keep this job, you need to determine what may make your boss nervous about you working remotely and address those concerns.
where did you get that? 12:27 p.m.
Michelle Li’s Faves Include a Chopova Lowena Skirt and a Loewe Flamenco Bag The stylist shared with us her strategic approach to dressing.
hair 12:10 p.m.
Behold, America’s Finest Mullets The kids’ division of the USA Mullet Championships is your fall hair inspo.
conscious consumption 10:00 a.m.
Gen Z’s Favorite Stylist Has Advice for How to Dress Sustainably Allison Bornstein teaches us how to shop our closets, define our style in three words, and treat fashion as wellness.
5 questions with... 10:00 a.m.
Devery Jacobs Is Taking Control of the Narrative The Reservation Dogs star talks writing a personal episode of the series.
sustainability 8:00 a.m.
How Interior Designers Make the Most of Facebook Marketplace All you need is a little patience and lots of scrolling time.
collaboration station Yesterday at 6:47 p.m.
Welcome to the Inside of Ye’s Mind Here’s a look inside Yeezy x Gap’s Times Square takeover.
encounter Yesterday at 5:36 p.m.
Alex Wagner Is Ready for Anything The 44-year-old journalist meets her moment as the new face of MSNBC.
By Karen K. Ho
gone sale-ing Yesterday at 3:20 p.m.
Your Wedding Dress-Code Woes Are Solved Reformation is offering up to 40 percent off select items.
cousin greg Yesterday at 3:01 p.m.
Nicholas Braun Has Gone Too Far Cousin Greg dressed up as beloved Friday Night Lights hunk Tim Riggins for W’s TV Portfolio.
power Yesterday at 2:56 p.m.
Florida Court Finds Teen Not ‘Mature’ Enough to Choose Abortion The court will force her to give birth instead.
crime Yesterday at 11:51 a.m.
What to Know About R. Kelly’s Latest Sex-Abuse Trial The singer is headed back to court in Chicago, this time for the alleged creation of explicit videotapes with minors.
breakups Yesterday at 10:48 a.m.
Florence Pugh and Zach Braff Are No Longer Dating In a new interview, Pugh revealed they quietly separated earlier this year.
celebrity Yesterday at 10:40 a.m.
A$AP Rocky Has Been Charged With Assault The musician faces two counts of assault with a semiautomatic firearm stemming from a November 2021 incident with a former friend.
the bachelorette Yesterday at 10:37 a.m.
The Realest Bachelorette Rejection of All Time This episode felt like a big step forward for the franchise.
love island Yesterday at 10:00 a.m.
An Ode to Ekin-Su, TV’s Best Reality Star This season’s Love Island winner is so much more than a wannabe influencer.
sustainability Yesterday at 10:00 a.m.
How to Afford The Row: A Guide Stylist Neelam Ahooja shares her methodology behind building a wardrobe that prioritizes conscious consumerism on a budget.
allegations Yesterday at 9:30 a.m.
Unpacking the Allegations Against Ezra Miller The actor released a statement saying they started treatment for “complex mental health issues.”
breakout Yesterday at 9:00 a.m.
Marisa Abela Is Ready to Take Up Space The Industry star reflects on growing up and landing a part in Greta Gerwig’s Barbie.
By Brooke LaMantia
More Stories