At midnight tonight, in sold-out theaters everywhere, frenzied fans will finally get to see The Hunger Games in its glorious entirety. Serious Games fans will no doubt be watching for the slightest inaccuracies, so we honed in on Panem’s soon-to-be-heroine Katniss Everdeen … or what she was wearing, anyway. Between squealing along with all the other super-fans at a screening earlier this week, we took notes on the movie’s interpretations of all her clothes, from hunting in District 12’s woods to unwittingly flirting with Peeta on a Capitol building’s rooftop. To help you temper your wardrobe expectations (no one appreciates that person whispering in the cinema, “But the backpack is supposed to be orange!”), we rated all of the girl on fire’s looks on our very scientific book-to-movie accur-o-meter. Click through the slideshow to see all of the outfits. Warning: some mini-sartorial spoilers ahead. 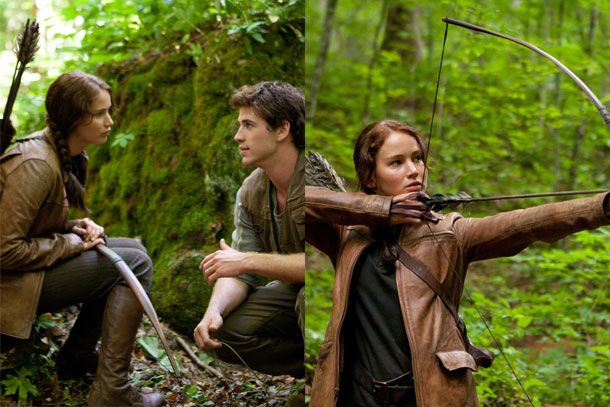 From the book: “I swing my legs off the bed and slide into my hunting boots. Supple leather that has molded to my feet. I pull on trousers, a shirt, tuck my long dark braid up into a cap and grab my forage bag.” In the movie: We won’t quibble over the missing cap, because there’s the clever inclusion of poor, deceased Papa Everdeen’s vintage (and miraculously fitted) leather jacket instead. The perfect outfit for shooting squirrels, darting around the forest, and unintentionally wooing your hunting partner. 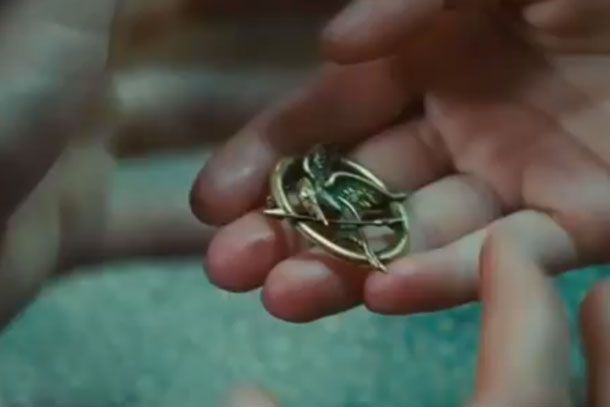 From the book: “‘They let you wear one thing from your district in the arena. One thing to remind you of home. Will you wear this?’ [Madge] holds out the circular gold pin that was on her dress earlier. I hadn’t paid much attention to it before, but now I see it’s a small bird in flight.” In the movie: Prepare to be sad at Madge’s omission — her character is scrapped entirely from the movie’s plot. But hey, who doesn’t like Greasy Sae? Katniss picks the perfectly realized brooch from Sae’s stall in the Hob and gives it to sister Prim as a pre-reaping good-luck charm. Aside from the fact that it proves to be a rather unlucky good-luck charm, it’s a flawless, pivotal piece.

From the book: “To my surprise, my mother has laid out one of her own lovely dresses for me. A soft blue thing with matching shoes… ‘Let’s put your hair up, too,’ she says. I let her towel-dry it and braid it up on my head.” In the movie: This is cute, in an ill-fitting, hand-me-down, Little House on the Prairie kind of way. But we couldn’t help but think Katniss’s mother (remember, she’d come from one of District 12’s wealthier families) might have had slightly more expensive-looking pieces hidden away for such occasions. Maybe its simplicity is for the best, though, because why compete with Effie’s haute magenta messiness?

Downtime in the District 12 Tributes’ Apartment

From the book: “I dress in a dark green shirt and pants. At the last minute, I remember Madge’s little gold pin.” In the movie: Let’s just say there’s a reason Katniss is sitting with her knees up like that. She wants to hide one of the many shiny, cheap-looking sleeveless blouses her Capitol wardrobe seems to be filled with. Even the black patent shoes look all wrong.

From the book: “I’m in a simple black unitard that covers me from ankle to neck. Shiny leather boots lace up to my knees. But it’s the fluttering cape made of streams of orange, yellow, and red and the matching headpiece that define this costume. Cinna plans to light them on fire just before our chariot rolls into the streets.” In the movie: It’s tough to process the lack of flaming headdresses, this is true. Or for that matter, to deal with the missing lush, fluttering capes — which are replaced with slightly ropy CGI flickering. But with arguably one of the movie’s trickiest looks to realize, costume designer Judianna Makovsky does an elegant job rendering the unitards and, yes, making coal SEXY. (Team Peeta.) 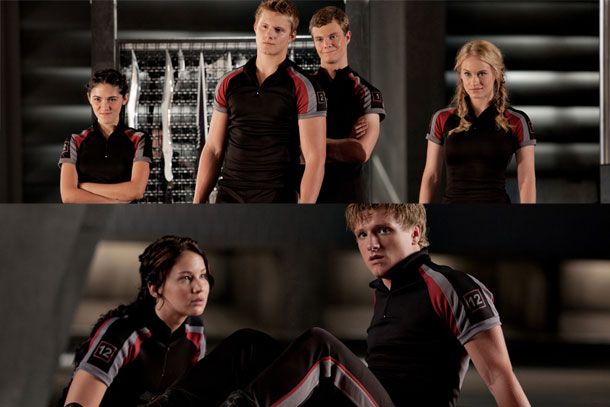 From the book: “I find an outfit has been left for me at the front of the closet. Tight black pants, a long-sleeved burgundy tunic, and leather shoes. I put my hair in the single braid down my back… While someone pins the number 12 on my back, i do a quick assessment. Peeta and I are the only two dressed alike.” In the movie: Well, it’s not that these are bad uniforms … even though they do rather resemble collegiate track team attire. But they’re very discordant with the book’s description of the D12 pre-Games activewear, which reads as less Running Man and more Renaissance Faire. Also, author Suzanne Collins makes it clear only Katniss and Peeta get matching looks — they’re so in love that the thought of different socks is just too much, you see — whereas the movie dresses all 24 tributes in these body-conscious stripes. (Team Peeta’s biceps.)

From the book: “The team works on me until late afternoon, turning my skin to glowing satin, stenciling patterns on my arms, painting flame designs on my twenty perfect nails. Then Venia goes to work on my hair, weaving strands of red into a pattern that begins at my left ear, wraps around my head, and then falls in one braid down my right shoulder. They erase my face with a layer of pale makeup and draw my features back out. Huge dark eyes, full red lips, lashes that throw off bits of light when I blink. Finally, they cover my entire body in a powder that makes me shimmer in gold dust… [and] my dress, oh, my dress is entirely covered in reflective precious gems, red and yellow and white with bits of blue that accent the tips of the flame design. The slightest movement gives the impression I am engulfed in tongues of fire.” In the movie: Jennifer Lawrence looks great. But then, doesn’t she always? And this is a lovely prom dress (certainly in keeping with the pastel formalwear all the tributes seem to get stuck with), but just not exactly the breathtaking, bejeweled number we hoped for. Makovsky admitted that creating these highly anticipated fire looks was a daunting task considering the fans’ high expectations. We’d argue it’s just about impossible, because even fan art can’t agree. To be fair, when Lawrence does her requisite twirl during her interview, the bottom of the gown does get “engulfed in tongues of fire,” but the only gems to be found are the red crystals stuck on her shoulder that look like those Claire’s Accessories decals you wore in seventh grade. 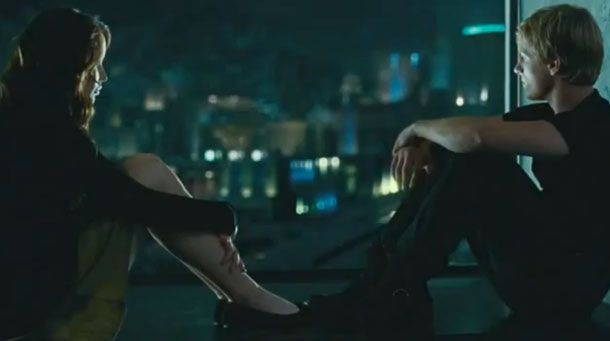 From the book: “…a thick, fleecy nightgown…” In the movie: Well, it’s not a nightgown. At all. 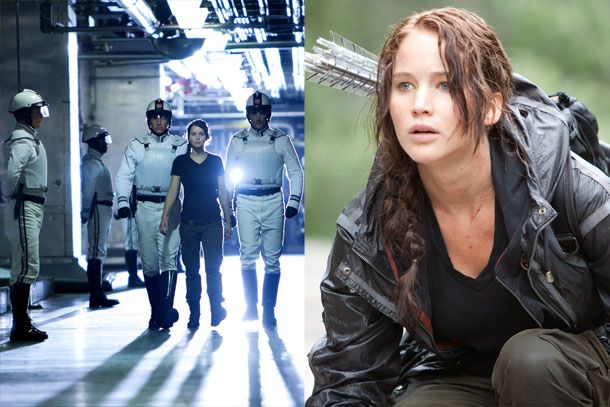 From the book: “Cinna does my hair in my simple trademark braid down my back. Then the clothes arrive, the same for every tribute. Cinna has had no say in my outfit, does not even know what will be in the package, but he helps me dress in the undergarments, simple tawny pants, light green blouse, sturdy brown belt, and thin, hooded black jacket that falls to my thighs… The boots, worn over skintight socks, are better than I could have hoped for. Soft leather not unlike my ones at home.” In the movie: This is pretty accurate. Just like the book, the tributes’ uniforms are more Banana Republic than Under Armour (which is a bit puzzling when you consider they’re running around fighting to the death). While we don’t see any sign of a singed braid post-fireball, we do get some nice close-ups of those cargo pants when we’re treated to a view of her mangled leg. One minor dispute: her backpack isn’t the bright “here I am, come kill me” orange.

From the book: “Venia helps me into a pair of flat leather sandals and I turn to the mirror. The sheer fabric softly glows. Even the slight movement in the air sends a ripple up my body. By comparison, the chariot costume seems garish, the interview dress too contrived. In this [white, gauzy] dress, I give the illusion of wearing candlelight… When I manage to pull my eyes away from the flickering fabric, I’m in for something of a shock. My hair’s loose, held back by a simple hairband. The makeup rounds and fills out the sharp angles of my face. A clear polish coats my nails. The sleeveless dress is gathered at my ribs, not my waist, largely eliminating any help the padding would have given my figure. The hem falls just to my knees. Without heels, you can see my true stature. I look, very simply, like a girl.” In the movie: We’re not spoiling all the movie’s looks for you. Because you should go see it. Suffice to say Katniss doesn’t look quite as precious as our illustration suggests, but she does wear a pale pink tutu for her post-Games chat with Caesar. And yes, she achieves that perfect sweet and innocent look … but still manages to show a little leg.

See All
culture Yesterday at 5:09 p.m.
Big Handsome Man Is Starring in a Musical Adam Driver is in Annette, which means I unfortunately have to watch it.
scent memories Yesterday at 4:55 p.m.
The Co-founders Who Are Addicted to Citrus Scents Talking to Christophe Cervasel and Sylvie Ganter, the husband-and-wife duo behind perfume house Atelier Cologne.
collaboration station Yesterday at 4:28 p.m.
Colorful Socks From an Iconic British Designer Dame Zandra Rhodes teams up with Happy Socks.
collaboration station Yesterday at 2:51 p.m.
Ooh, This Is a Very Good Collaboration Target is partnering with Christopher John Rogers.
:( Yesterday at 2:33 p.m.
Apparently Otters Can Get COVID A romp of “geriatric” otters tested positive at the Georgia Aquarium.
fall/winter 2021 Yesterday at 2:26 p.m.
The Paradox at the Heart of Gucci x Balenciaga How the collection reasserted Gucci’s glamour. Plus: Celine cuts loose.
By Cathy Horyn
wtf Yesterday at 2:10 p.m.
This Terrible Netflix Movie Belongs in Theaters ’Deadly Illusions’ is the most batshit movie I’ve ever had to watch at home alone.
just a little kiss? Yesterday at 12:00 p.m.
I Like What Lizzo and Chris Evans Are Doing Here Look who’s flirting in the DMs.
book excerpt Yesterday at 10:49 a.m.
What My Mother Ate I remember her taste clearly because that was how my mother loved you, in subtle observations of what brought joy.
By Michelle Zauner
celebrity Yesterday at 10:40 a.m.
Are Travis Barker and Kourtney Kardashian Trolling Us? This isn’t the first time they’ve engaged in public finger-sucking.
toxic workplaces Yesterday at 10:03 a.m.
Sutton Foster Responds to Abuse Allegations Against Scott Rudin While the brother of the producer’s former assistant issues a video statement: “Real consequences are coming for you.”
how i get it done Yesterday at 7:00 a.m.
How a Sex-Tech Company CEO Gets It Done Lora Haddock DiCarlo is one of those execs who gets up at 4:30 a.m.
By Amanda Arnold
astrology Apr. 18, 2021
Madame Clairevoyant: Horoscopes for the Week of April 19 Taurus season starts this week!
By Claire Comstock-Gay
sex diaries Apr. 18, 2021
The Woman Who Can’t Stop Sexting Her New Military Boyfriend This week’s sex diary.
celebrity Apr. 18, 2021
Paris Hilton Says Nonconsensual Sex Tape Leak Gave Her PTSD “I didn’t want to leave my house, I felt like my life was over.”
mysteries Apr. 18, 2021
Zoë Kravitz, Please Say More Apparently she and Taylour Paige are “a thing” now … but what kind of thing??
keeping up with the royals Apr. 18, 2021
Harry and William Spotted Chatting at Prince Philip’s Funeral The whole thing looked reserved and respectful, as expected.
ugg x feng chen wang Apr. 16, 2021
The Perfect Shoe for Your Perpetually Cold Feet Ugg collaborated with designer brand Feng Chen Wang on a hybrid sandal-boot.
the body politic Apr. 16, 2021
Mazie Hirono Isn’t Afraid of Conflict A long talk about anger with the gloriously foulmouthed senator from Hawaii.
By Rebecca Traister
recommendations Apr. 16, 2021
The 17 Best Butt Plugs You Can Buy Online According to experts.
More Stories