Ophélie Rupp is reaping the sweet, sweet rewards of her coveted spring 2012 Prada and Miu Miu catwalk exclusives. After those two key appearances, the Parisian scored a campaign shoot with Mario Testino for Etro’s spring ads and posed for Dazed & Confused’s March issue. During the fall 2012 shows, Rupp’s flaxen locks and penetrating stare were embraced by the world’s top designers, including Balenciaga, Dolce & Gabbana, Chloé, Valentino, Fendi, and Jean Paul Gaultier. The soft-spoken 21-year-old stopped by our offices this week to chat about killing time backstage, her childhood in Tahiti, and whether she Googles herself.

For the fall 2012 season, you walked a total of 43 shows in New York, London, Milan, and Paris. In which city were you the most exhausted?
London, because I started castings right after I got off my flight. But I was with my friends Julia [Frauche], Marie [Piovesan], and Nadine [Ponce] for most of the time, so it was cool.

Previously, you were an exclusive with Prada and Miu Miu for the spring 2012 season. Do you think that helped your catwalk bookings this time around?
Yeah, but it was hard for me in the beginning because I was in New York for three months, like, two years ago, and I was not very serious [about modeling] — too much going out and stuff like that. I worked [on] myself for six months before the spring 2012 season, doing a lot of sports and being active. So when I went to the casting for Prada in Milan, it was like my last chance because I was tired of modeling. [The casting] was really long. I waited for about three days to know whether or not I got the job, and after, I did the hair and makeup tests for the show with my friend and current roommate, Julia [Frauche].

You probably had a lot more free time then, as you only walked for two shows.
Actually, it was pretty hard. I think it was easier to do all the shows than be put on an exclusive. When you’re doing the looks for a show, hours can get really long … standing in the same room all day for, like, two weeks. But when you’re doing all the shows, you’re running around everywhere, so things move quicker.

How did you kill time backstage this season?
I read a lot. Whenever I would find a French book at any store, I would just buy it, no matter what it was. I read about five books throughout all four Fashion Weeks. Currently, I’m reading L’Année de l’éveil by Charles Juliet. I bought it at the airport when I was in a hurry.

Did you run into any girls that were competitive, maybe even kind of catty?
Maybe some girls, for sure. It’s like, the girl talked to you when we’re all starting out in New York, but when you start booking big shows, they just stop talking to you — not even saying hello in Paris. That was strange. But it’s not a lot of girls, most are nice.

You have a distinct runway presence from the other girls. You appear to be very serious, maybe even aggressive. What goes through your head when you’re walking?
[Laughs.] I was like that since I was really young. I saw a picture of me from when I was five years old, and I had that same face. It’s so strange. When people tell me, “Be strong!” and things like that, I’m just like, “Okay, that’s easy.” Also, I was really stressed in New York, so maybe it was more visible then.

Stressed?
Because I didn’t know if I was going to “make it” this season. After Miu Miu and Prada, while it’s two really big shows, you never really know [if you’re going to be successful] next season. Things move quickly.

Okay, let’s go back now. Tell me a bit about your childhood.
I was born in a suburb of Paris. When I was 6, I moved to Tahiti for four years [because] my dad works for the army, but I returned to Paris when I was 10. I have an older, 25-year-old brother who’s a professional swimmer, and my mother works at the post office. I was very athletic growing up, playing lots of sports. I started swimming when I was 4, and I have memories surfing and playing on the beach in Tahiti. For ten years, I studied tae kwon do. I quit at red one, just before getting the black belt, to start my modeling career.

How were you discovered?
When I was 18, I was working as lifeguard for my summer holidays and my booker in Paris found me, as he was swimming. It was funny, he got out of the pool and handed me a piece of paper with his information. I wasn’t sure if I wanted to model, but I had just finished my first semester of studying biology at university, but I didn’t like it at all. I checked the website and decided to meet him with my parents, so then I quit school and [decided to] try modeling.

What’s your diet like?
During Fashion Week, I eat what I can … what I can find. When I’m home, I eat everything, but I’m doing a lot of sports so it balances each other out. After shows, I would eat pasta.

You mentioned several times that you’re very active. What’s your fitness routine like?
I have so much muscle on my legs from all my years of swimming so they were really big; it was really hard to lose it. I do a lot of abs work, and I ran a lot last week. I still try and swim sometimes, when I have time. I try to do something active 30 minutes every day.

Who are some of your favorite musicians?
In the mornings, I listen to a lot of house music. It helps me wake up. [Laughs]. I did that this morning, actually. I listen to everything, though. I’m not too difficult — maybe some French groups.

Do you consider yourself to be beautiful?
No, I don’t think that. Maybe sometimes when I have the makeup on and it’s more like, That’s me? I think because my parents never told me things like, “Yeah, you’re so pretty. You need to model.” My brother was like, “Really? She can model?”

Do you Google yourself?
I tried one time, and I just saw someone say, “Yeah, she is too skinny,” and it was at the end of Fashion Week, and I was really tired and I really was too skinny. 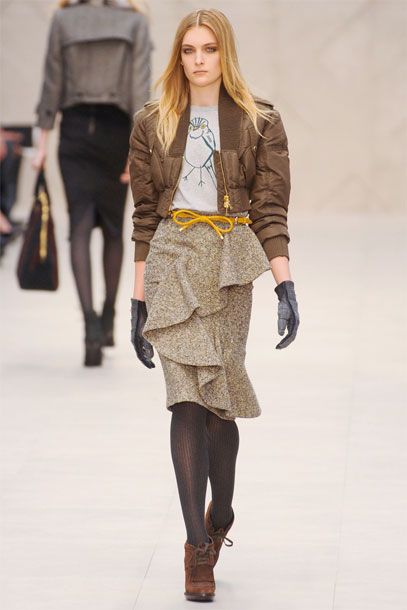 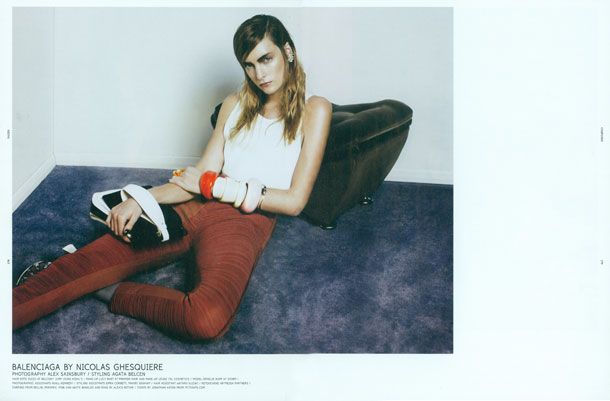 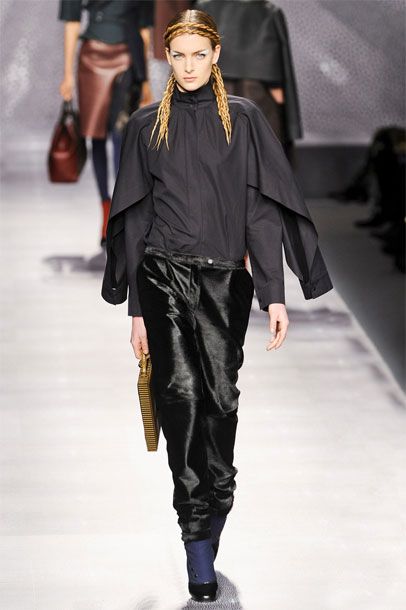 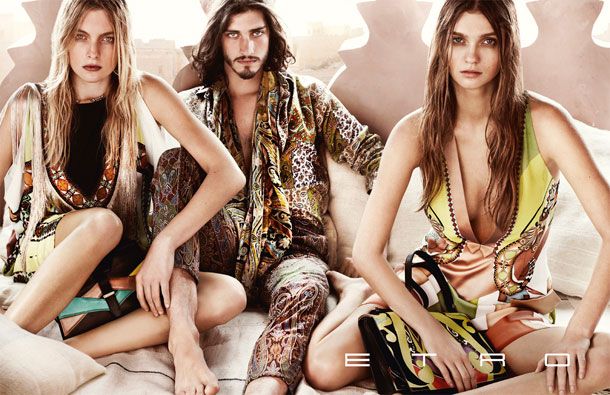 The face of Etro, spring 2012. Photographed by Mario Testino.

encounter 4 mins ago
At Jamian Juliano-Villani’s New Gallery O’Flaherty’s, ‘Taste Is Out the Door’ The painter and her pals thought the art world had gotten too prissy. “This is the thing. No one’s doing anything cool.”
By Matthew Schneier
advent calendar 2021 5 mins ago
Gift of the Day: A Cute, Chunky Claw Clip Give their hair a helping hand.
By Erica Smith
keeping up with the royals Yesterday at 9:07 p.m.
Prince Harry Is Happy You Quit Your Job The former royal doesn’t think a job should threaten your “mental fitness.”
crime Yesterday at 7:01 p.m.
Everything to Know About Jussie Smollett’s Trial The actor was accused of staging his own hate-crime attack in 2019. Things only got more complicated from there.
pinkie promise Yesterday at 6:25 p.m.
This Love Seems Exhausting Machine Gun Kelly and Megan Fox take the pinkie promise to the next level.
what is real? Yesterday at 5:41 p.m.
Will I Ever Watch ‘Succession’ the Same Way? This Jeremy Strong profile makes me question everything.
ikea meatballs Yesterday at 3:25 p.m.
Being Stranded at Ikea Sounds … Good? Snowed-in shoppers in Denmark had a sleepover with Christmas movies and cocoa.
we asked Yesterday at 3:09 p.m.
Taylour Paige, Rowan Blanchard, and More on Their Favorite Holiday Tradition “We Asked” is a column in which we ask different people the same funny, inquisitive (and sometimes weird) question.
always shopping Yesterday at 2:44 p.m.
16 Pairs of Work Pants You’ll Actually Want to Wear Work pants to get excited about.
maxwell trial Yesterday at 1:16 p.m.
Witness Says Ghislaine Maxwell Made Her Dress as a Schoolgirl for Epstein And more key testimony from the trial of Jeffrey Epstein’s alleged partner in sex crimes.
art basel Yesterday at 1:00 p.m.
Party Dispatch From the Big Art Show One girl, four Art Basel parties, and a determination to find out what an NFT is.
By Sangeeta Singh-Kurtz
mysteries Yesterday at 12:57 p.m.
Is Grimes Finally Ready to Publicly Roast Elon Musk? Her new song is about an ex who loves video games and space.
it's good 4 u Yesterday at 12:53 p.m.
Olivia Rodrigo Is Finally Going on Tour Can April come sooner?
scene report Yesterday at 12:46 p.m.
The Other Kind of Party Favor That Goes Up Your Nose BYO COVID-19 rapid tests.
give me chaos Yesterday at 12:09 p.m.
What’s Behind Our Thirst for Roman Roy? Enter the era of the chaos goblin.
encounter Yesterday at 12:00 p.m.
This Is Still Candace Bushnell’s City And just like that … she’s back! For ten weeks.
sex and the city Yesterday at 11:20 a.m.
Why Isn’t Samantha in And Just Like That …? All the reasons Kim Cattrall did not want to be in the Sex and the City reboot.
fashion Yesterday at 10:50 a.m.
This Is How You Make a Red-Carpet Debut as a Couple Jonah Hill and his girlfriend, Sarah Brady, wore matching blue suits to the Don’t Look Up premiere.
school shootings Yesterday at 10:25 a.m.
A 15-Year-Old Allegedly Opened Fire at a Michigan High School The parents of alleged shooter Ethan Crumbley have been arrested and charged after a manhunt.
auto-refill Yesterday at 10:13 a.m.
The Beauty Products This Longtime Editor Uses to the Last Drop A $10 hair spray pushes Leah Wyar’s visits to the colorist from five weeks to three months.
By Daise Bedolla
More Stories