While all the lady Olympians got to show off their tats, run faster than a locomotive, and wear clingy spandex (and, in one case, wings) for the latest issue of Vogue, the male athletes apparently needed more spicing up for their editorial. Conveniently, Karlie Kloss and a bunch of fabulous designer gowns were available, so … problem solved! Vogue didn’t even bother to fit the boys with suits (who needs custom shirts when you’ve got abs like that?), so the menfolk wore their normal sports gear while Karlie was inserted — quite awkwardly, in some cases —  into their practice sessions. We examine the full spread in our slideshow. 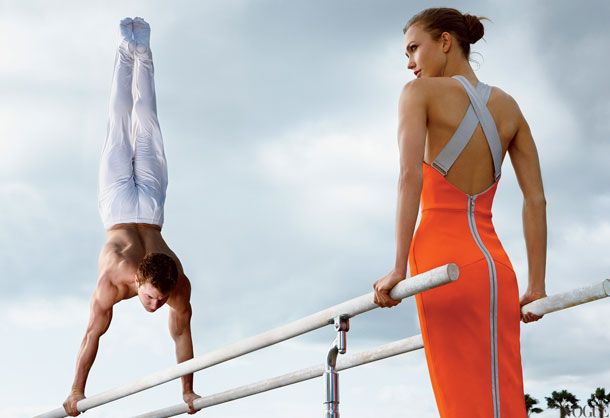 When confronted with a wedgie of the white-pants variety, it’s only polite to look away. With gymnast Jonathan Horton; Kloss wears Victoria Beckham. 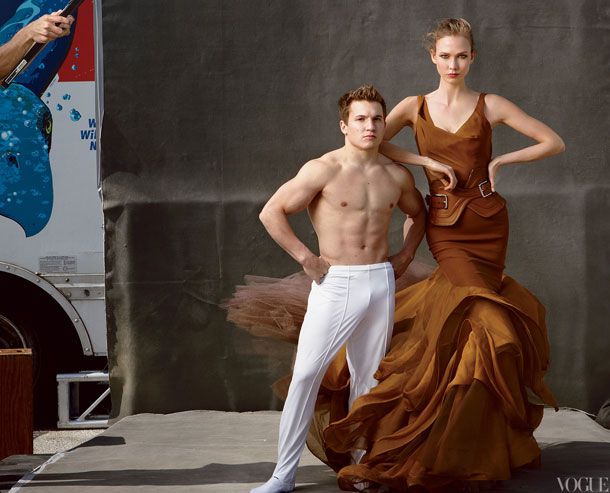 Don’t all tall people know that it’s rude and insulting to use short people as armrests? At least she abstained from leaning on his head. She probably didn’t want to get hair product on her elbow. With gymnast Jonathan Horton; Kloss wears Vera Wang. 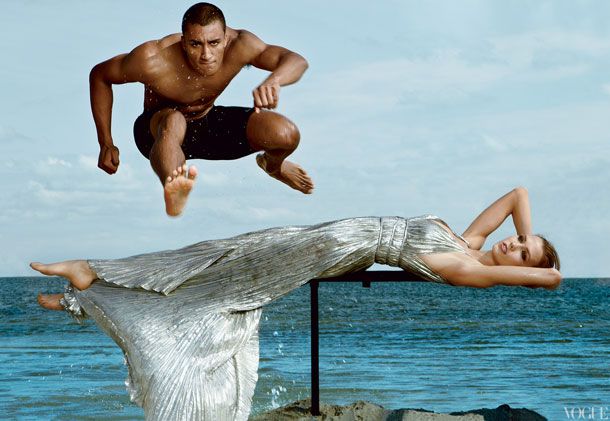 We just have so many questions about the strange, collage-style Photoshop going on here. Is Karlie supposed to be emerging from the ocean or lying on top of it? Are the splashes coming from her skirt or from Ashton Eaton as he leaps over her in his spandex shorts? Are hurdles are the new half-shells? With track and field competitor Ashton Eaton; Kloss wears Oscar de la Renta. 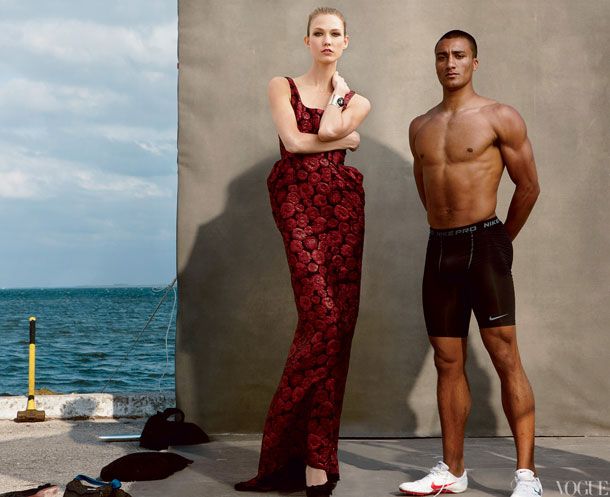 And, yes, she’s taller than he is even when she’s standing up. Not sure what the hammer and the discarded clothing are for, although the latter might come in handy for Eaton at some point. But then again, with abs like that, maybe not. With track and field competitor Ashton Eaton; Kloss wears Lanvin. 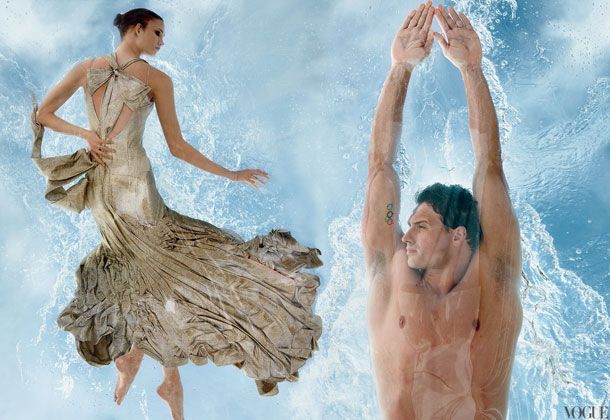 More bizarre Photoshopped layers. But it would appear that Ryan Lochte does, indeed, stay on top of the armpit situation. Can’t have that extra drag, you know! With swimmer (and newly minted Vogue cover star) Ryan Lochte; Kloss wears Stella McCartney. 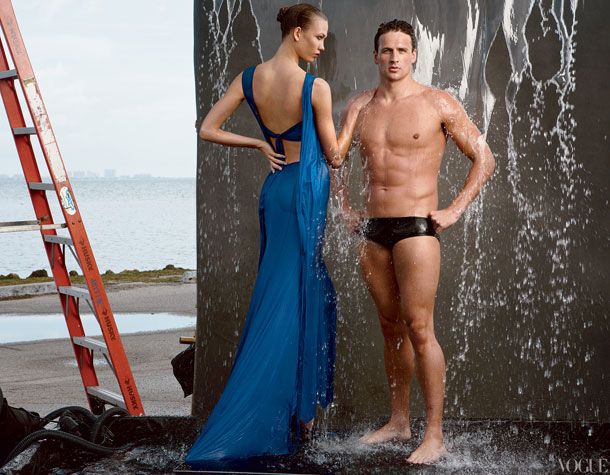 Yep, she’s taller than he is, too (not quite armresting height, though). That ladder is just so temptingly close. With swimmer Ryan Lochte; Kloss wears Haider Ackermann. 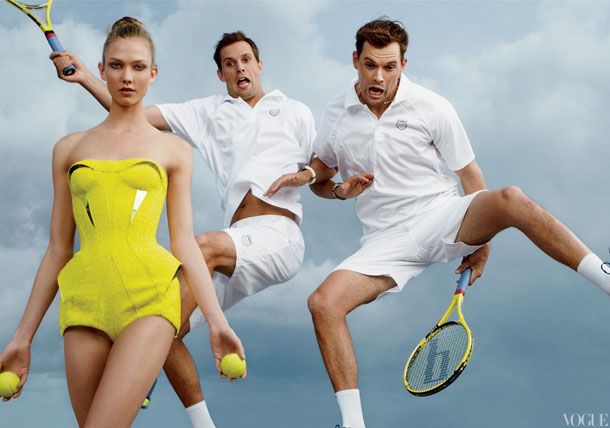 Count how many balls are in this picture! But really, the midair arm-linking is adorable.  With tennis players Bob and Mike Bryan; Kloss wears Atelier Versace. 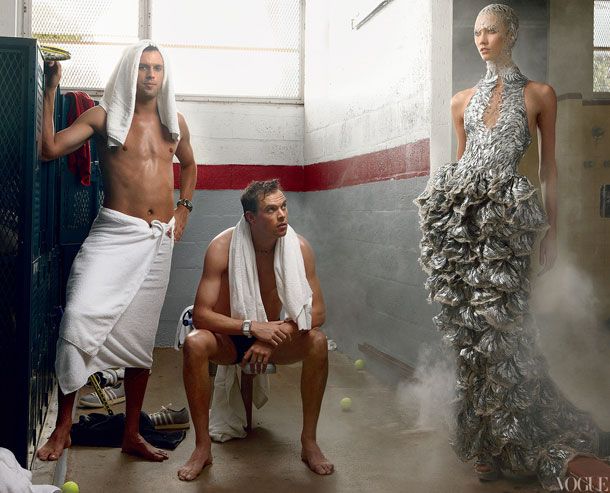 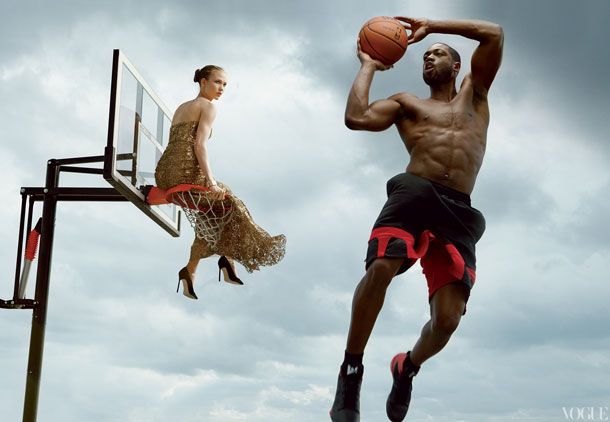 Finally, here’s one guy who’s taller than Karlie, and she gets to cheat! In other news, now we know what that ladder was really for. With basketball player Dwyane Wade; Kloss wears Oscar de la Renta. 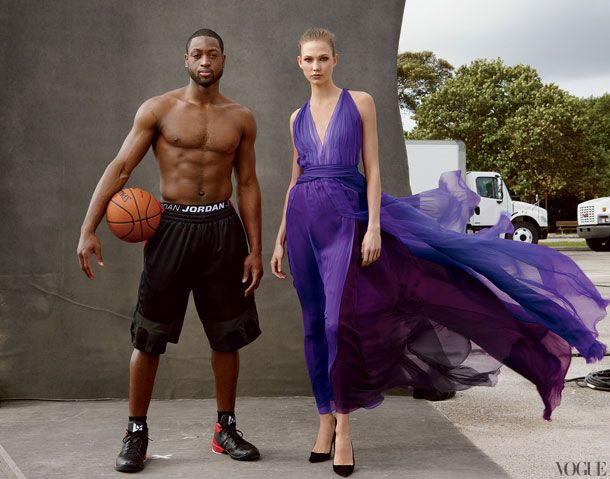 A much more subdued version of that infamous Lebron and Gisele photo. (In fact, Dwyane looks like he’s dozing off.) Apparently this is what happens when you get too hung up on political correctness. With basketball player Dwyane Wade; Kloss wears Bottega Veneta.

See All
poses a problem Yesterday at 6:06 p.m.
Posing for Photos Doesn’t Have to Be Awkward These TikTok tutorials are here to help.
lawsuits Yesterday at 5:56 p.m.
Unraveling the Abuse Allegations Against Chet Hanks “White Boy Summer” kicks off with a host of disturbing allegations by his ex-girlfriend.
the object of our affection Yesterday at 5:52 p.m.
I Found My ‘Hot Vax Summer’ Outfit Preppy on the top, party on the bottom.
lunchtime buy Yesterday at 5:20 p.m.
The Lip Gloss I’m Wearing As Soon As I Can Ditch My Mask For wildly goopy, dewy, glossy, moisturized lips.
trendspotting Yesterday at 2:11 p.m.
Looks Like It’s Clog O’Clock Just slip them on and go.
By Devine Blacksher
police shootings Yesterday at 12:52 p.m.
What We Know About the Police Killing of Daunte Wright The 20-year-old Black man was fatally shot by Minnesota police during a traffic stop.
power Yesterday at 12:44 p.m.
‘What If I Had Gotten a Head Start on Hormones?’ The Cut spoke with a 19-year-old from Arkansas about how access to gender-affirming health care saved his life.
By Angelina Chapin
power Yesterday at 12:15 p.m.
The Matt Gaetz Scandal Keeps Getting Worse The Florida Republican’s “wingman” — an accused sex trafficker — has reportedly been cooperating in the investigation against him.
first look Yesterday at 12:13 p.m.
The Author of A Little Life Has a New Book Hanya Yanagihara’s To Paradise looks to answer “some of the questions we’ve all been asking about this country’s premise.”
rock on Yesterday at 11:25 a.m.
This Designer Merch Is Hardcore Balenciaga just dropped a Rammstein capsule collection.
the cut podcast Yesterday at 10:34 a.m.
We Are All Burnt Out Is there any way to break free? We set out for answers, guided by a Japanese novel, a mastermind of self care, and the one and only Esther Perel.
By the Cut
crime Yesterday at 10:32 a.m.
Bernie Madoff Has Died The architect of a towering Ponzi scheme passed in prison at the age of 82.
cold cases Yesterday at 10:20 a.m.
Decades After Kristin Smart Vanished, 2 Men Finally Arrested The college student mysteriously disappeared after an off-campus party in 1996.
obsessive tester Yesterday at 10:00 a.m.
The Absolute Best Highlighters for Looking Less Tired After rigorous testing, here are our favorites.
the hot duke Yesterday at 9:46 a.m.
Shonda Rhimes Was ‘Shocked’ Fans Revolted After Regé-Jean Page Left Bridgerton “So yeah, I was like, whoa!”
bachelor nation Yesterday at 9:35 a.m.
Bachelor Star Colton Underwood Comes Out As Gay “I would have rather died than said, ‘I’m gay,’ and I think that was my wake-up call.”
livestream Yesterday at 7:55 a.m.
Watch the Celine Fashion Show Livestream  Enjoy!
ask polly Yesterday at 6:30 a.m.
Good-bye, New York I’m headed to Substack and expanding Ask Polly to find new ways to help readers cultivate compassion and joy. Come with me!
By Heather Havrilesky
mother's day 2021 Apr. 13, 2021
The Cheapest, Nicest Gifts for Mom From the Most Expensive Brands Because for nearly impossible-to-please mothers, size doesn’t matter — but a fancy brand name does.
By The Editors
keeping up with the royals Apr. 13, 2021
The Tabloids Found a Way to Make Philip’s Death About Meghan It didn’t take long for members of the media to suggest that she may be responsible for death of a man nearing his centennial birthday.
By Sangeeta Singh-Kurtz
More Stories