Modeling was never in the cards for die-hard basketball player Grace Mahary. The Alberta native had her sights set on a sports career, instead — until an opponent on the court knocked in one of her teeth, causing her to reassess her calling. But the game’s loss is modeling’s gain: After signing with Elmer Olsen Model Management — also responsible for Daria Werbowy — the 22-year-old flew to Paris, met with Riccardo Tisci, booked a Givenchy exclusive for fall 2012, and the rest is history. Mahary stopped by our offices following a recent V magazine editorial shoot to chat about working with Tisci, her sushi and Pinkberry diet, and whether she Googles herself.

Tell me a bit about your childhood.
I was born in Edmonton, Alberta, in a pretty small city. I grew up there, and I played basketball [with my] two older brothers. My parents moved to Canada in 1983 from Eritrea, East Africa — it’s in North Africa right above Ethiopia. No one knows about it. I was the mother [in school]; people were always asking me for advice. I played basketball, so [saying I’m a] tomboy is an understatement. If it wasn’t for Destiny’s Child and TLC, I would not know [about] girl power. Oh, and the Spice Girls!

That makes two of us … or should I say, two become one. Anyway, how were you discovered?
Like most models, I guess you are approached a couple times. I was in Toronto with my family in the mall, and they came up to me, and I was like, “No, not a chance.” [Because] I didn’t care about anything except for basketball and school; I didn’t know what modeling was [about]. After a few years of them being persistent, I decided, I’m going to go to Toronto and see what this is all about, and Elmer Olsen took me onboard.

Oh, Elmer Olsen is great. He is credited for so many of the Canadian models that work today.
He is amazing. He’s Daddy O. That’s what we call him.

What do your parents think about your new career?
My mom is absolutely ecstatic about [it]; she was the one that was like, [drops in accent] “Why do you need to play basketball, why? Be a girl.” Sorry, Mom, for the accent. My dad is all about school, but he’s starting to accept and understand how serious this business can really be. You can make a profession out of this.

So, it seems you were really big on basketball. What made you say, “Okay, fine, I’ll give modeling a shot”?
I got my tooth knocked in, actually. After five years of saying, “You know, Elmer, I don’t want to go travel to do this stuff,” there was [then] a huge accident on the court. I was [going] for a rebound and this girl … she took her elbow and —  boom! — right against my top lip. In an instant I knew it [was] gone. I went to the bathroom and my left cheek is pushed back, and I had a moment, like, Maybe I should give this a shot before it’s all over. Last year, I had to take a break from school and basketball, so I went to Paris, and then I traveled to South Africa and London.

What were you studying in school?
I was studying physical education and health. Yeah, total jock, complete opposite of what I’m trying to do today. I love it, I miss it. It was something I was interested in.

Well, you know, you could always go back and complete your degree.
I have another three years to go. I put it on hold, but I’m really trying to see what else is out there because, really, it’s been the same dream, you know, science, school, and basketball. Modeling is completely different.

Fair enough. This season you hit it big with the Givenchy exclusive for fall 2012. So tell me how that booking came about.
I was actually on [my] way to a different casting, and my booking agent in Paris said, “Grace, drop everything — you are going to go to Givenchy.” I jumped on the metro and went up there. At first, I thought I was in the middle of nowhere [because] I was in the suburbs of Paris, [but then] I saw another model walking in, and I said, “Okay, good. I’m not in the middle of nowhere.” I go in, and — lo and behold — Riccardo [Tisci] is sitting there on this big couch listening to music, and I did not know if I should be nervous or excited. So, I walked for him, and he was interested in where I was from. Actually, they made me walk again, and then they said I was in the right place at the right time.

And after that?
I did the looks [for the show], and then I did the show. The team is really amazing. When you are working around people that talented, everything is just so organized, and you feel kind of inspired.

Did you make any buddies backstage?
I did, actually. Anmari [Botha], she was another exclusive. We were discussing how we can’t do anything else because being an exclusive [means] you aren’t allowed to do any other shows. So, we were watching other girls run around. We wanted to be doing that, too, but we couldn’t do that — and we just clicked. We just started doing things together. After the show, she moved in with me and we became roommates.

So, what’s your diet like?
Pinkberry! [I was] so excited to be back in New York, so I could have that. It was the first thing I had when I came back. I love sushi, and I love going to the salad bars. I know it sounds so cliché, but listen: We can’t get [sushi and salads] in every corner in Paris and London.

What about your fitness regime?
I miss working out. I haven’t played basketball in so long. I haven’t done very much in a while, but I love hot yoga now. It’s my new thing, it puts me in Zen. If could go to the courts in the summer in New York without getting my tooth knocked in, I’d love it.

Read anything good lately?
Yeah, I just actually finished One Day by David Nicholls. It’s huge in the U.K. I’m not into love stories at all — that’s not my thing — but it was so good [that] I loved it. Quick and easy read with a cute twist.

Your skin is on point, I must say. What are your beauty secrets?
I put a mask on everyday. No, actually, I did not know about skin care until yesterday. I drink a lot of water. I’ve been obsessed with Clinique’s mild wash lately.

If you could meet anyone, dead or alive, who would you like to meet?
Do you want me to be honest? Want to know what came to my head first?

Yes, of course.
J. Cole, because I love his music right now. But, if you want to go deeper than that … Nelson Mandela. 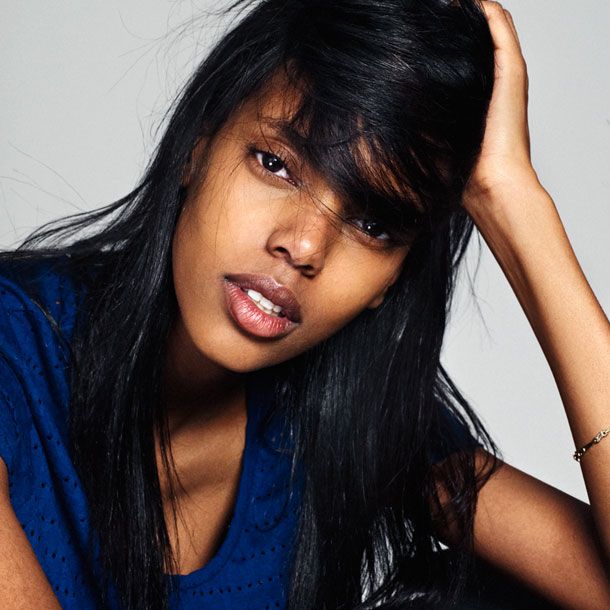 Walking the fall 2012 Givenchy show in Paris, as an exclusive.

life after roe 3 mins ago
The Future of Abortion Pills Is on the Line One Trump-appointed judge holds the power to effectively ban medication abortion even though the U.S. approves its use up to ten weeks into pregnancy.
spring fashion 3:00 p.m.
Ella Emhoff’s Other Plus One Her always-present Secret Service detail.
style 2:41 p.m.
At Marc Jacobs, a Generous, Life-Enhancing Fashion History Lesson The designer’s latest show, “Heroes,” celebrated the the late Vivienne Westwood.
in memoriam 2:33 p.m.
Paco Rabanne Has Died The revolutionary fashion designer was 88.
spring fashion 2:00 p.m.
11 Spring Bags, From $7 to $7,900 This season’s most compelling bags, from Forever 21 to Hermès.
best in class 1:50 p.m.
16 of the Very Best Water Bottles Always be hydrating.
By Emma Wartzman
valentine's day 1:20 p.m.
The 21 Best Last-Minute Valentine’s Day Gifts Where and when to get them.
friday sales 1:06 p.m.
20 Things on Sale You’ll Actually Want to Buy: From Klorane to Patagonia Including a heart-shaped mini waffle maker, our favorite cream-blush stick, and a moisturizer packed with snail mucin.
valentine's day 12:14 p.m.
19 Nontraditional Valentine’s Day Gifts Give something unexpected this February 14.
spring fashion 12:00 p.m.
Mei Kawajiri’s Very Extreme Nails  Her completely over-the-top talons landed her features in magazines and gigs backstage for Marc Jacobs, Tom Ford, Miu Miu, and Moschino.
By Maya Allen
fashion 11:59 a.m.
Do Not Show Up Late to the Marc Jacobs Show Lourdes Leon was apparently denied entry for arriving after the doors closed.
keeping up with the royals 10:53 a.m.
Will Harry and Meghan Get to Go to the Coronation? Sources suspect they’ll be invited; whether or not they accept is another question.
q & a 10:00 a.m.
Rachel Bilson Has Some Notes for The Bachelor The Accused actress and podcast host also talked about reuniting with her O.C. co-star Mischa Barton.
a choice? 10:00 a.m.
What Is Going On With Austin Butler’s Voice? I fear he may be stuck talking like Elvis forever.
extremely online 9:40 a.m.
I Can’t Shut Up About About Nancy Pelosi’s Hot-Dog Diet The former House Speaker also endorses ice cream for breakfast.
spring fashion 8:00 a.m.
The Woman Who Became McQueen The quiet ascendance of Sarah Burton.
By Cathy Horyn
culture 8:00 a.m.
This Is Pamela, Finally The model-actress’s memoir and documentary reveal only what she wants us to know. It’s about time.
By Roxane Gay
the wedding files 7:00 a.m.
At Georgia O’Keeffe’s Ghost Ranch, an ‘Epic’ Wedding No speeches, just dancing.
By Kaitlin Menza
¡hola papi! 6:00 a.m.
‘I Feel Abandoned by My Friend’ Hopefully the two of you can have a productive conversation that leaves you both in a healthier place.
By J.P. Brammer
power Yesterday at 9:16 p.m.
Dave Portnoy Has Dropped His Lawsuit Against Insider The Barstool Sports founder filed suit last year in response to allegations he filmed women without consent during sex.
More Stories