Ryan Lochte, a six-time Olympic-medal-winning swimmer, becomes the fourth man to ever cover American Vogue for the magazine’s June issue, which also features soccer player Hope Solo and tennis champion Serena Williams (both of whom are also Vogue cover first-timers, although Serena and her sister Venus have been featured in the magazine several times). This is the first time a man has ever been on the cover of Vogue without a female model: The previous male cover stars — Richard Gere, George Clooney, and Lebron James — were photographed with Cindy Crawford, Gisele, and Gisele again, respectively. You can see those covers in our slideshow.

It’s not unusual for Vogue to make a big deal out of the Olympics, and they’ll take almost any excuse to run arty spreads of trim, muscular athletes wearing skintight clothing and bounding across grassy lawns or sandy beaches, as they do in almost every annual “Shape” issue. The 2008 Olympics marked the last time a male athlete (Lebron) was on the cover. (The photograph of him roaring at the camera, tossing a basketball like an eggshell, and clutching an ecstatic-looking Gisele by the waist drew controversy for “re-enforcing stereotypes of black men as aggressive and dangerous.”) That April 2008 issue also featured profiles of top Olympic athletes, as does this one.

So, what does it mean that three athletes — one of them male — are on this month’s cover? Anna Wintour’s inclination to marry fashion and sports is a canny one, and it’s a direction she’s been taking for some time now. She frequently attends basketball games and tennis matches in the New York area, but she also invites athletes into the fashion world, hosting them at Vogue events and featuring them in the magazine. Putting three of them on the cover may be a watershed moment, but it’s been a long time coming.

Of course, Wintour is clearly aware of the overlaps between the sports and fashion worlds. Sure, a lot of fashion fans may not be interested in sports — and vice versa — but the two industries have a lot in common. Their stars become huge celebrities. Both embrace extreme physical ideals, nutty personalities, and showiness. What athletes wear, both in and out of the game, is carefully examined. The way people define themselves by what they wear is not unlike how people define themselves by certain sports teams. Fashion and sports can each involve more than a fair amount of spandex, glitter, and sequins, and both utterly frivolous and culturally essential.

What’s more, this cover probably has something to do with Vogue’s new pact to fight eating disorders, which involves using healthy models at all times. The June issue will also feature a spread dedicated to the new initiative (it’s unclear whether this spread and the “healthy model” spread are one and the same). 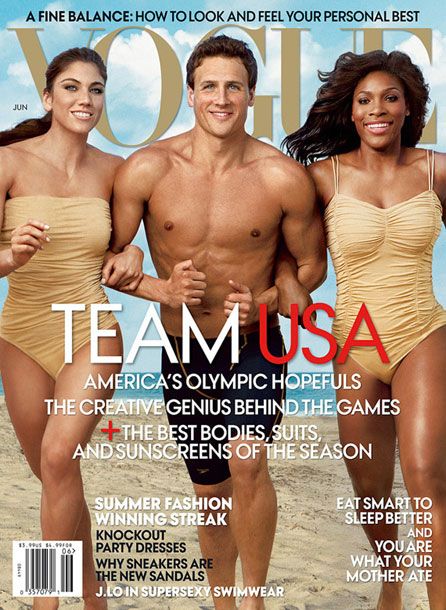 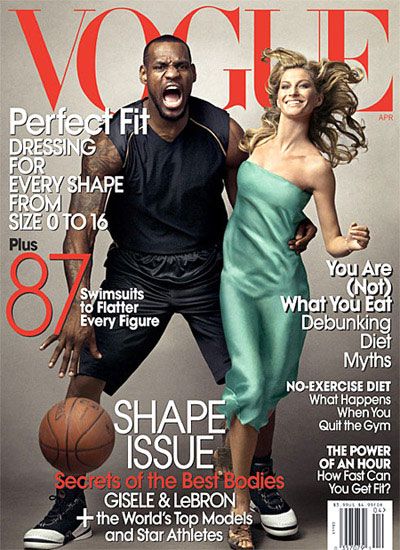 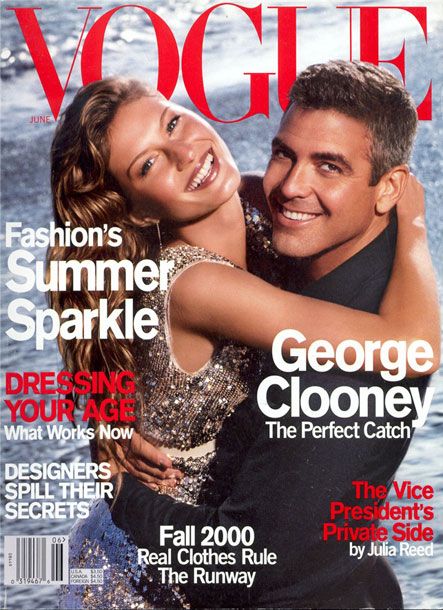 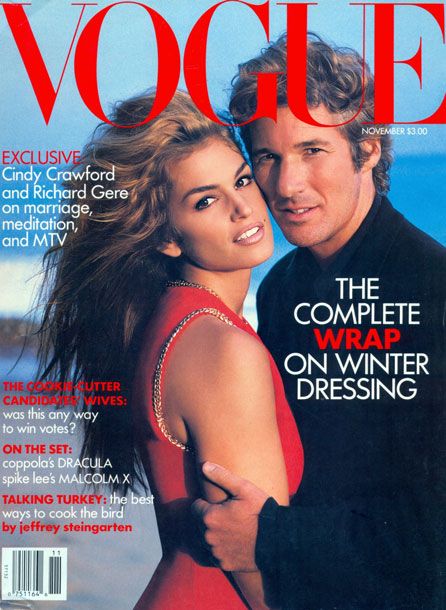 Ryan Lochte the Fourth Man to Ever Cover Vogue

tyre nichols 11:08 a.m.
Tyre Nichols Memorial Fund Raises More Than $1 Million: Updates The five officers charged with Nichols’s murder will be back in court in mid-February.
sparking joy 11:00 a.m.
Marie Kondo Has ‘Kind of Given Up’ on Being Neat Validation for messy homes everywhere.
transgender rights 10:59 a.m.
Utah Bans Gender-Affirming Care for Trans Youth Already this year, Republican lawmakers have proposed more than 150 bills limiting the rights of trans people.
spring fashion 8:00 a.m.
The Promise of Pyer Moss Kerby Jean-Raymond was one of fashion’s most celebrated young designers. Then what happened?
By Tahirah Hairston
spring fashion 8:00 a.m.
It’s Glo Time Grammy nominee GloRilla is figuring out how to be famous while staying F-R-E-E.
By Tirhakah Love
spring fashion 8:00 a.m.
The Hustle of Women in Hip-Hop Editor-in-chief Lindsay Peoples on launching the celebration of 50 years of women in hip-hop who’ve changed the game.
By Lindsay Peoples
how i get it done 7:00 a.m.
How Political Commentator Molly Jong-Fast Gets It Done “We’re a pretty sedentary bunch, but we do a lot of dog-walking. Also, I try to visit my mom once or twice a week depending on how guilty I feel.”
sex diaries Yesterday at 8:00 p.m.
The Creative Director Getting a Little Tired of Feeld This week’s sex diary.
snl Yesterday at 3:48 p.m.
Michael B. Jordan Is a Different Kind of Jake From State Farm See him rock the red polo and khakis on SNL.
celebrity couples Yesterday at 12:28 p.m.
This Good Morning America Romance Keeps Getting Messier Amy Robach and T.J. Holmes are out at ABC.
astrology Yesterday at 8:30 a.m.
Madame Clairevoyant: Horoscopes for the Week of January 30 The overarching astrological story right now is one of growth, action, and following through on intentions.
By Claire Comstock-Gay
spring fashion Jan. 27, 2023
12 Ways of Looking at André Leon Talley The friendships and love stories found inside his estate auction, as told by Anna Wintour, Marc Jacobs, and Tom Ford, and more.
By Cathy Horyn
wait what is happening on tiktok? Jan. 27, 2023
Everything We Know About TikTok’s Lashgate Drama Did Mikayla Nogueira add false lashes or not?
parties! Jan. 27, 2023
Teyana Taylor, Anna Camp, and More of the Bestest Party Pics This Week Parties with Gucci, Sundance, and more.
gone sale-ing Jan. 27, 2023
10 Things You Don’t Have to Pay Full Price for This Week Deals from Dyson, Nordstrom, Shopbop, and more.
friday sales Jan. 27, 2023
19 Things on Sale You’ll Actually Want to Buy: From Lunya to Areaware Including fuzzy Birkenstock clogs, a teensy Cricut heat press, and our favorite weekender bag from Patagonia.
recommendations Jan. 27, 2023
20 Best Butt Plugs You Can Buy Online According to experts.
q&a Jan. 27, 2023
Saint Omer’s Guslagie Malanda Is No Longer an Actress in Secret How the Saint Omer actress went from art curator to awards-season hopeful.
the wedding files Jan. 27, 2023
A Twice-Rescheduled Midweek Wedding in the Hudson Valley “We’re not really ‘farm wedding’ people, so that limited our options.”
By Kaitlin Menza
keeping up with the royals Jan. 27, 2023
Has Prince Andrew’s Teddy-Bear Collection Been Confiscated? His Buckingham Palace apartment has reportedly been revoked, and with it, his dozens of stuffed toys.
More Stories