In just three short months, Ashleigh Good went from waiting tables in Auckland to landing an exclusive with Givenchy for their fall 2012 runway show (she’s since walked in Acne’s resort 2013 show and was just shot for Dazed & Confused). But perhaps the biggest shocker for the 20-year-old was what came next: a new look. “Three weeks ago, [my booker at Ford Models] called me to the office and was like, ‘Now don’t bug out but we’re going to cut your hair,” remembers the England-born, New Zealand–raised model. Though Good admits that it’s taken some time to get used to the style — think blunt bangs, lightened dip-dyed tips, and bleached eyebrows — the transformation has begun to pay dividends. “I mean, every model has long, light-brown hair, so it sets me apart from the rest. It’s completely changed everything for me,” she says with a knowing nod. While we wait to see just how many shows she books come September, Good stopped by our offices to share her thoughts on model apartments and messing with makeup artists.

Tell us a little about your childhood.

I grew up in England and moved to New Zealand when I was 10 — which I hated at the time, but it was the best thing. There’s a very laid-back lifestyle in New Zealand, so it was nice. I’m about a two-minute walk from the beach!

How did you get discovered?

I was working in a coffee shop in November and one day I took the bus, which I never, ever do — I’m real lazy, and my mum would take me or I’d drive myself. I was waiting at the bus stop, and this lady is driving around the block and she’s staring at me. She comes around again, and I’m like, What is she looking at? And five minutes later, she runs around the corner and comes up to me and I’m like, “Ohhh, stranger danger!” But she asks, “Are you a model?” I’m reply, “No …” And she says, “Come over to my house, we’ll take some photos.” So we took some photos, and I didn’t really do anything [after that]. But in February, she was like, “Let’s take some more photos!” So she took some photos and put them on her Facebook page. Two hours later, my now-booker from Ford contacted saying, “We want Ashleigh in New York.” And the week after that, she said, “Ashleigh’s booked the Givenchy show in Paris as an exclusive.” The next week, I went to Paris. Paris for two weeks, home for a week, and then I’ve been [in New York] ever since.

What was it like having your very first show be Givenchy?

Scary. I cried afterwards. Not happy tears, not sad tears, just relieved tears. Like, I did it, and I didn’t fall! It was a really good experience for me.

Have there been any big surprises about the modeling world?

One thing is my model apartment is great — you hear horror stories about girls stealing your stuff, girls vomiting in the toilet, stuff like that. I was expecting horror and wanted to stay on my own, but it’s actually really nice. We’re quite a family.

Anything else you’ve learned?

The number one thing is, when you’re at a photo shoot, to be totally comfortable. I always try to joke around. Appropriate jokes. There are times when the crew is very uptight and maybe a little bit awkward. So my trick is, when the makeup artist is curling my lashes, I say, “Ow!” And she’ll be like, “Oh my gosh, I’m so sorry,” and I’m like, “Just joking!” And then everything relaxes after that.

What are your obsessions?

I like fishing, because we live so close to the sea. I [went] fishing almost every day just before I came here. It’s funny because when I go to some castings they’re like, “What do you like to do for fun?” I’m answer, “Fishing!” And they say, “What? Most girls are like, ‘Shopping.’”

Can you also gut a fish?

Yup. Actually, the best thing to do is to take some lemon with you and when you catch the fish, just cut it open and put lemon on it and eat it, because it’s fresh.

If you weren’t modeling — or fishing — what would you be doing?

I had actually just gotten a job one week before I moved here, at a call center for an insurance company. I feel like I have a good phone manner — it was fun, and I was really excited about working there. I said, actually, to my friend when I went to the interview, “I hope I get this job because it’s going to change me … it’ll be a really good, full-time job.” Little did I know things would change in this way! 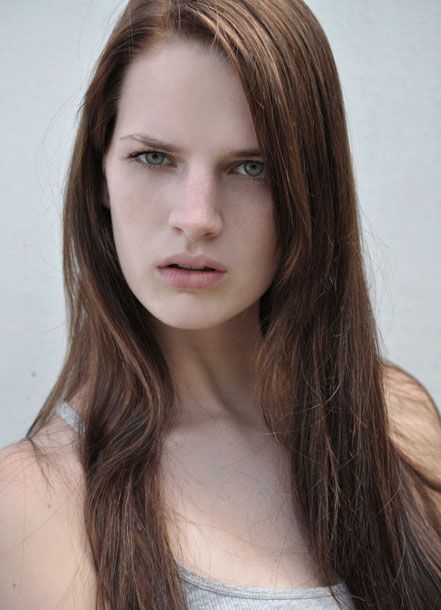 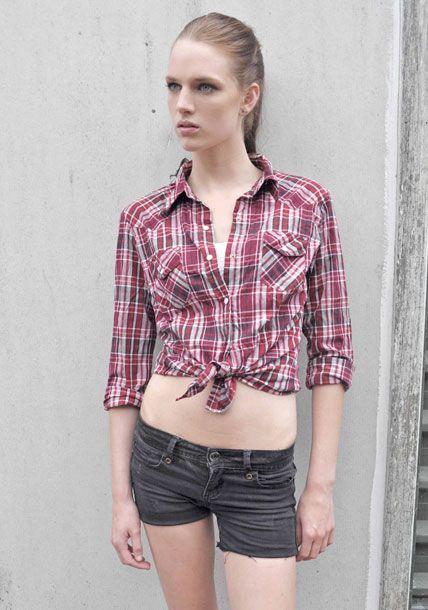 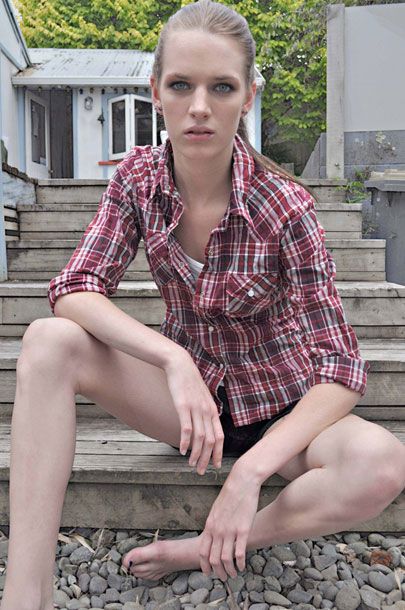 Walking the fall 2012 Givenchy show in Paris as an exclusive. 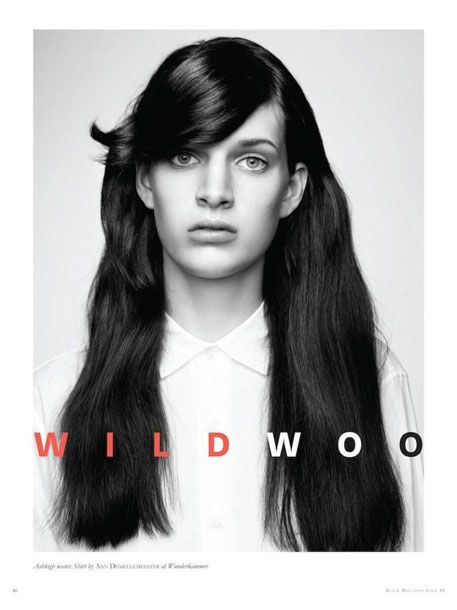 In the May issue of Black Magazine, shot by Charles Howells.

style 10:00 a.m.
Gigi Hadid Called Out Ye for ‘Bullying’ After His YZY Show Ye went after Vogue contributing editor Gabriella Karefa-Johnson on Instagram after she disapproved of his “White Lives Matter” shirt.
pfw spring 2023 Yesterday at 5:30 p.m.
A Comedy of Errors at Paris Fashion Week This has been an utterly ridiculous Paris season, in the best and worst sense. And it’s not over yet.
By Cathy Horyn
fashion Yesterday at 5:29 p.m.
How Bella Hadid’s Spray-on Dress Was Made We were just as confused. So we found out.
celebrity Yesterday at 5:04 p.m.
Angelina Jolie Claims Brad Pitt Choked One of Their Children In her countersuit against Pitt, Jolie also alleged he poured beer on her and their children during the 2016 plane incident.
power Yesterday at 4:24 p.m.
‘Pro-Life’ Candidate Denies Report That He Paid for an Abortion Herschel Walker’s own son denounced him after an alleged ex-girlfriend told the Daily Beast that Walker had paid for her abortion.
always shopping Yesterday at 3:30 p.m.
12 Best Pairs of Leggings for Running in the Winter We spoke with runners to round up the warmest leggings so you don’t have to.
blackpink Yesterday at 3:01 p.m.
What’s Going on With BLACKPINK’s Leaked-Photo Drama? Everything to know about Jennie and V’s photo leak.
always shopping Yesterday at 2:30 p.m.
The Cut Shop’s Favorite Black Boots The kind you can wear every day.
divorce rumors Yesterday at 2:22 p.m.
Gisele Bündchen and Tom Brady May Be Over for Good A new report claims Bündchen and Brady have hired divorce attorneys.
breakout Yesterday at 2:00 p.m.
Paulina Alexis Doesn’t Care If You Think She’s ‘Too Rez’ The Reservation Dogs actress won’t let anything — or anyone — get in her way.
By Simon Moya-Smith
ask a boss Yesterday at 12:00 p.m.
‘How Do I Say No to Administrative Tasks That Aren’t My Responsibility?’ Once you start doing them it can be hard to stop, because you become the person with the track record of doing them well.
q&a Yesterday at 11:57 a.m.
Lio Tipton Is Still Processing The A Friend of the Family actor breaks down their approach to the true-crime genre.
rip Yesterday at 11:08 a.m.
Loretta Lynn, Country Legend, Dead at 90 Her raw and feminist country songs influenced generations of performers.
culture Yesterday at 10:15 a.m.
Where Did Don’t Worry Darling Go Wrong? Hollywood feminism strikes again.
first person Yesterday at 9:00 a.m.
Easy Target I was harassed and assaulted in broad daylight. Would bystanders have intervened if I was white?
By Vanessa A. Bee
"try everything" — shakira Yesterday at 8:50 a.m.
Bye, Guy In their first video as an official trio, the Try Guys say they were just as shocked by Ned Fulmer’s behavior as you were.
cut covers Yesterday at 8:00 a.m.
The Pain and Glory of Cori Bush In less than two years, the congresswoman built a base of power in D.C. by wearing her hardships on her sleeve.
By Rita Omokha
wtf Oct. 3, 2022
Everything We Know About Kanye West’s Harmful YZY 9 Show At his YZY 9 show, West printed on shirts a slogan used by white-supremacist groups.
review Oct. 3, 2022
Balenciaga Says, ‘Here’s Mud in Your Eye’ Demna toasts the wild and real.
By Cathy Horyn
power Oct. 3, 2022
Iranian Forces Led Brutal Crackdowns Against University Protestors Despite forceful government intervention, women continue to take to the streets in defiance of government orders.
More Stories