It’s been exactly one week since Katie Holmes filed for divorce from Tom Cruise. During the past seven days, she’s made exactly five public appearances — six if you count one covert visit to Whole Foods on July 4 that was captured by an enterprising Daily News reporter. All of these outings appear to have been scrupulously planned, and with good reason: How Holmes conducts herself during this time period will undoubtedly impact her divorce proceedings, as well as her future work prospects.

Every time that Holmes has set foot outside her Chelsea apartment on Seventh Avenue and 25th Street, she’s looked put together but not too polished. She’s worn soft, pretty, natural-looking makeup — she and her team know she’ll be photographed, after all — with her hair slicked back in a clean ponytail. Most of her outfits have been unidentifiable (if she’d worn anything by a major designer, we’d have gotten a zillion press releases about it), which indicates that she’s been sticking to clothes from Holmes & Yang, the label she designs with her stylist, Jeanne Yang. The dress she wore for a guest appearance on Project Runway: All Stars on Monday was from her line’s fall 2012 collection — an obvious TV plug for her brand — which she wore with Roger Vivier shoes. Other than that, the only recognizable designer items she’s been seen in all week are a pair of poppy-print YSL wedges, which she wore to buy Suri ice cream in the East Village on Monday night.

Holmes’s agenda has been controlled and safe as well. Aside from her previously scheduled appearance at Parsons for Project Runway, almost all of her activities have involved taking Suri to do wholesome things like eat an ice-cream cone, visit a children’s museum, and meet a playdate at Alice’s Tea Cup, an adorable café that serves twee nibbles like scones and crustless sandwiches. The Whole Foods that she’s shopped at twice is on the ground floor of her apartment building, which makes for a convenient photo op, as paparazzi have been camped on her doorstep around the clock.

Holmes’s PR team seems to have orchestrated every detail of this week — from her August Elle cover to the announcement of her clothing line’s first-ever presentation in September — down to the minutest detail. It seems unlikely that she’ll make any daring or unpredictable moves in the near future, fashion or otherwise, as she’s being portrayed as the “sane” party and wants to keep it that way. But she’s walking a fine line between relatable sweetheart and overly contrived persona (did she really need to run out for that half-gallon of organic milk this morning, for instance?). See our slideshow to decide for yourself.

Where: At Parsons the New School for Design in New York. Why: To be a guest judge on Project Runway: All Stars. What she’s wearing: A dress from Holmes & Yang’s fall 2012 collection and Roger Vivier shoes. Days since divorce filing: Three.

Where: At Sundaes and Cones in the East Village. Why: To get Suri an ice-cream cone. What she’s wearing: Unidentified top and shorts, a Henry Cuir tote bag, and YSL wedge pumps. Days since divorce filing: Three.

Where: At the Children’s Museum of the Arts in Soho. Why: To buy Suri some trinkets. What she’s wearing: Unidentified jeans, flats, and a polka-dot halter top, plus her trusty Henry Cuir bag. Days since divorce filing: Six.

Where: At Alice’s Tea Cup uptown. Why: To buy Suri more trinkets. What she’s wearing: The same outfit that she wore to the museum earlier. Days since divorce filing: Six. 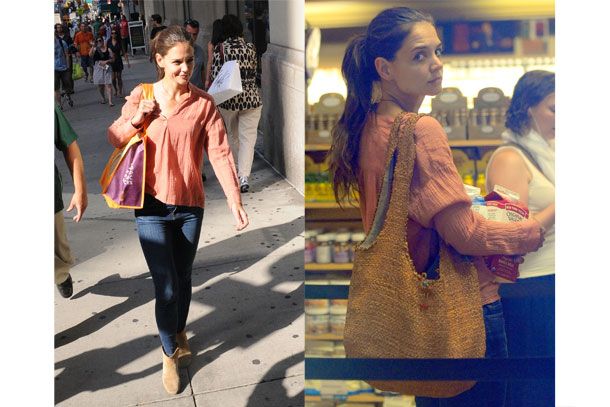 Where: At the Whole Foods on the ground floor of her Chelsea apartment building. Why: To buy a half-gallon of organic milk. What she’s wearing: Unidentified jeans, shirt, moccasins, and the same Henry Cuir bag — plus a reusable Whole Foods tote that she bought at the register to carry her milk half a block home. Days since divorce filing: Seven.