Claim to Fame: Won Scottish Young Designer of the Year in 2012

What’s Up Next: Launching a sister label called “HS” at the end of July

Click through the slideshow to see some of Scanlan’s designs, plus, hear about how she got her start and her run-in with Bruce Willis. 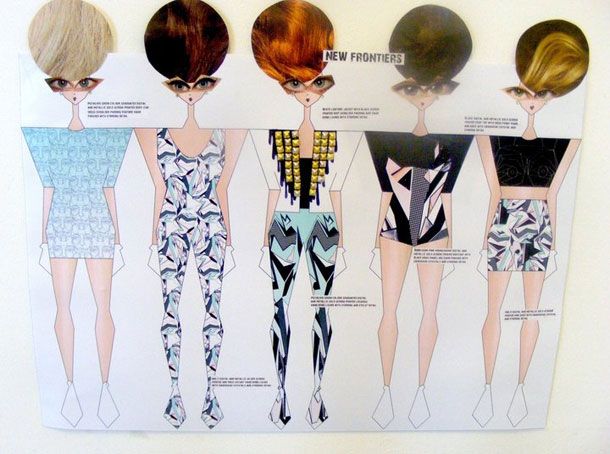 “My Gran was a dressmaker, so when I was growing up, I was constantly surrounded by her making clothes. That’s just something I’d always done since I was a little girl — I was always making clothes for my Barbie dolls, or knitting things.” 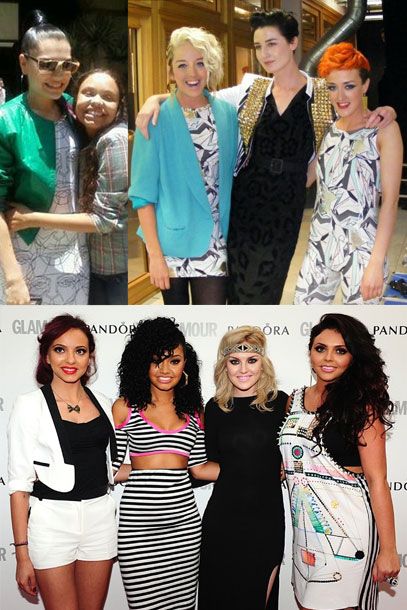 On her first celebrity client:

“Erin O’Connor (top right photo, in the center) was the guest presenter at our graduate show and she ended up buying one of my jackets. Since then I’ve never had to contact anyone, all stylists now contact me.” 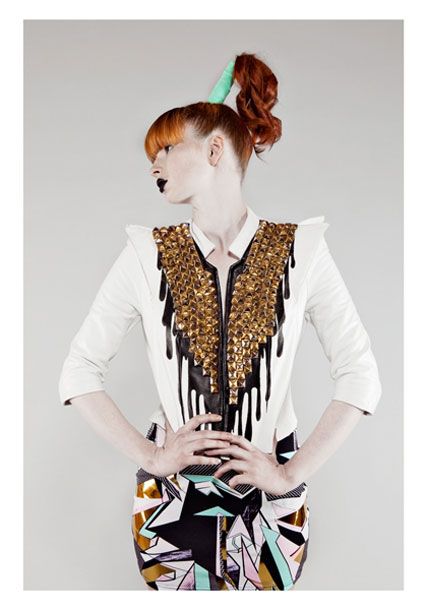 On interning for Jeremy Scott:

“Scout Willis — Bruce Willis and Demi Moore’s daugher — interned with us two days a week. One day, her sister couldn’t pick her up so she had to call her dad. Her dad came to pick her up and I was so starstruck. It was like being in a Die Hard movie.” 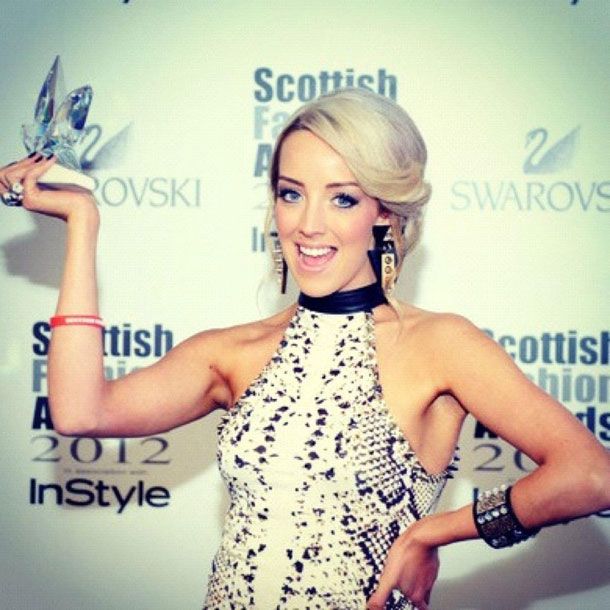 On winning big at the Scottish Fashion Awards:

“There were so many talented people in my category and I just thought, well there’s no chance I’m gonna win this. Because I’ve done, like, one collection. And I’ve been on maternity leave. [Ed note: Hayley is a mother to six-month-old twins.] And then I did! So that was pretty amazing.” 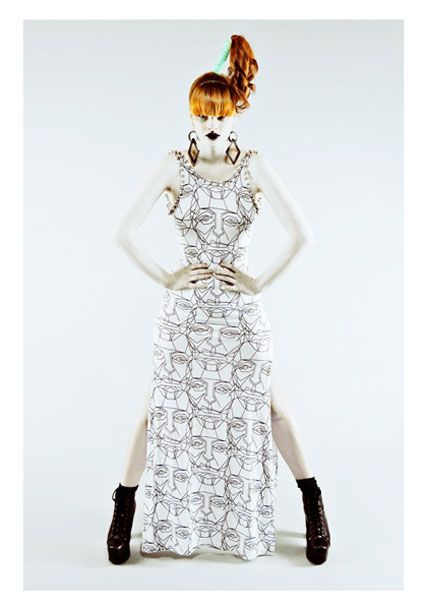 On studying textile instead of garment design:

“Well for one, I’m not the best pattern cutter. I know the basics, but I’m not so good with structured shapes and things because I’ve never been trained in that. [But] I want it to be about the detail and the embellishment, and then I keep the silhouettes really simple so that [the print] does all the talking for you.”

self 13 mins ago
I’m Tired of Explaining Why I Don’t Drink We have to expand our language beyond “sober.”
By Sarah Wood
remembrances 12:39 p.m.
The Fashion World Remembers André Leon Talley Designers, writers, and celebrities paid tribute to the inimitable fashion icon, who died on Tuesday at 73.
vampires 12:08 p.m.
Megan Fox’s Engagement Ring … Bites? “The bands are actually thorns. So if she tries to take it off, it hurts.”
celebrity 11:03 a.m.
Tracing the Ongoing Feud Between Britney and Jamie Lynn Spears Things spiraled out after Jamie Lynn went on Good Morning America to promote her new book.
style 9:35 a.m.
Anna Wintour Remembers André Leon Talley The Vogue editor mourned her friend and former colleague, calling him “a brilliant and compassionate man.”
in memoriam 8:33 a.m.
André Leon Talley Has Died The former Vogue creative director and editor passed away unexpectedly this week at the age of 73.
culture Yesterday at 8:10 p.m.
There Really Is a Coordinated Online Attack on Meghan Markle A new analysis found that the Duke and Duchess of Sussex were the targets of a strategic, monetized social media campaign against them.
euphoria Yesterday at 6:31 p.m.
8 Pieces You Can Shop From Episode 2 of Euphoria By Kim Shui, Réalisation Par, Nodaleto, and more.
fashion Yesterday at 6:24 p.m.
All Signs Point to a Big Year Ahead for Aimé Leon Dore The cult menswear brand has a New Balance collection in the works and LVMH money in its pocket.
engagements Yesterday at 6:13 p.m.
What Is Machine Gun Kelly Hiding? The story of his proposal to Megan Fox isn’t adding up.
the grammys Yesterday at 4:56 p.m.
The Grammys Are Back On The awards show has been pushed to April — and will now take place in Las Vegas.
health Yesterday at 4:45 p.m.
Everything to Know About Rapid At-Home COVID-19 Tests Americans are finally eligible to receive free rapid tests.
power Yesterday at 2:09 p.m.
The New York Post Gets Its Own Tabloid Scandal A former top editor sues, saying the paper’s notorious former boss was welcomed back after sexually harassing her.
By Shawn McCreesh and Angelina Chapin
movies Yesterday at 2:00 p.m.
Daniel Radcliffe, We Are Ready for Your Music Career The actor will be portraying Weird Al in an upcoming biopic.
the bigger picture Yesterday at 1:34 p.m.
Wrestling Has a Dark Side. But for Some, It’s a Safe Space. Photographer Sofie Vasquez spent a year traveling the country, documenting the indie-wrestling scene.
By Bindu Bansinath
keeping up with the royals Yesterday at 1:29 p.m.
Uh, Prince Andrew Has a Teddy Bear Collection? A new documentary claims he yelled at staff who didn’t arrange his stuffed animals to his liking.
dinosaur bones Yesterday at 12:48 p.m.
This Is a Truly Surreal Zoom Background Dwayne “the Rock” Johnson made a recent TV appearance sitting in front of an enormous dinosaur skull named Stan.
recommendations Jan. 17, 2022
We Should All Be Wearing House Shoes A foolproof way to avoid bringing a dustpan’s worth of dirt into your bed.
k-i-s-s-i-n-g Jan. 17, 2022
Lexi and Fez, Sitting in a Tree Could this be Euphoria’s most unexpected romance?
buzz buzz buzz Jan. 17, 2022
All Our Burning Questions From the Yellowjackets Finale Some of the biggest mysteries remain unraveled.
More Stories