Photo: Courtesy of The Fashionisto

John Hein has a sharp sense of humor — he arrived to our offices wearing a T-shirt with Seinfeld’s Kramer printed on it. But while he’s been spending his days reading books by David Sedaris and his nights watching films by David Wain, nothing makes him laugh like the thought of his recent foray into modeling. “The funny thing for me is that, growing up in the Midwest, I never considered it a potential career. But now looking at it I think, Oh my God I’m making money or traveling just because I fit these clothes,” he said, arching an eyebrow and pausing for a perfectly-timed beat before adding, “It’s super hilarious to me.” The rest of the industry takes Hein a bit more seriously. The 23-year-old Michigan native and, as he puts it, “13-year-old Leonardo DiCaprio” lookalike, just walked for Valentino, Bottega Veneta, and Belstaff in Italy, and landed not one but two Interview spreads in nearly as many months (the second comes out this fall). We sat down with the laid-back model to talk about his surreptitious photo shoots, why he lives by the words of George Costanza, and his “clumsy stripper” dance moves.

Tell me a bit about your childhood.
My dad was always changing jobs, so I moved around probably eight times by the time I was in fifth grade. It was all western Michigan, and then I lived in Indiana for four or five years. It’s good now because I want to keep moving. Like, all the time. I’ve only been in New York for three months but it seems like every six months to a year I’m itching to travel, so they gave me that bug.

How were you discovered?
I went to University of Michigan — studying environmental science, like, sustainable food and renewable energy and hippie stuff — and I graduated and then I toured a little bit with my band, and at the end I was just like, I need to leave. There was nothing new for me. I had never been to L.A. before so I thought, Okay, I’ll try it. My buddy Dave was living out there and he took me to the Rose Bowl Flea Market in Pasadena on my third day there. While I was buying a T-shirt, this dude walked up to me and said, “I don’t do this a lot, but I have this line, had a model drop out, and I need to shoot Tuesday … are you interested?” I didn’t have a job and he said, “I’ll give you a couple hundred bucks,” so I was like, “Sure.” I shot it and the photographer and I got along pretty well, and he asked, “You don’t have an agent?” “No.” “Alright, I’m gonna get you one.” That week I went and saw Ford and they liked me right away. Within two weeks I got signed to Ford in L.A., which was awesome.

What was your first season in Milan like?
That was my first time in Europe, ever. With a big family — I’m one of five — and not a ton of money, we never traveled outside of the U.S. and Canada. I got direct[ly] booked for Valentino, which was in Florence, so 30 models and the casting director took a bus for four-and-a-half hours from Milan. It felt like a field trip from elementary school! I was completely nervous for Valentino, and then after that I did Bottega Veneta and Belstaff and that wasn’t a big deal. But that first one I was like, Ughhh!

What’s your guilty pleasure?
I don’t like to feel guilty about anything. I would say that something that I love that maybe people would consider a guilty pleasure is ‘90s dance music. It’s one of my favorite things in the world. Like, Ace of Base, La Bouche, Real McCoy, Eurythmics … all that stuff, I listen to all the time.

You’ve tweeted that your signature dance move is “the clumsy stripper.” What is that, exactly?
[Laughs] Well, it seems like every time I’m drinking, out with friends, and dancing — even to this ‘90s dance music — my shirt always ends up half unbuttoned or fully unbuttoned. I think I’m a decent dancer when I’m doing it, but I’m not; I’m awful. I’m super-lanky and clumsy. I don’t see it as bad, I just have my own style.

Anything else you’re into?
I’m kind of obsessed with New York right now. I’ve been here a few times on tour with my band and stuff, but this is the first time that I’ve lived here for a long time. It’s so different from where I grew up — even Ann Arbor, I was there for four years and in that time I saw everything there was to see. There’s something new to see every day and you never get bored here. And I can just people-watch, that’s the best. There are some weirdos here. I have a hobby of taking pictures of weird people on the subway and trying not to get caught. The other day there was this dude who had a tattoo on his bicep that said “Wiccan Power” with a ying-yang. I thought that was hilarious.

Have you ever gotten caught?
One time I took a picture and I usually have my phone on silent and it wasn’t, so it was like, click! I just played it off like I was doing something on the phone, but I was totally caught.

Do you have a life motto?
I’m a big Seinfeld fan, and there’s a screen cap of George — he’s my favorite — and the way that he says, “I don’t care,” that’s it. [Laughs] I don’t really care about a lot of stuff. I just look at life in a very funny way, I look at it with a sense of humor, so I don’t care. I don’t really get worked up about stuff, I just take it as it comes.

Where do you see yourself in 10 years?
I never look that far in the future, ever. All I really knew as a kid was I wanted to go to University of Michigan, and I did that and I was like, Oh shit what do I do now? [Laughs] That’s why I moved to L.A. — I didn’t bring anything with me, I didn’t bring anyone with me, I was just like, I’ll see what happens. And when I was asked to move to New York, it was the same thing. I don’t want to think about 10 years from now because I don’t like commitment. So if I think like that, then I’ll have to commit to something … not my style.

Do you hope to at least be modeling for the foreseeable future?
I love it. I’d like to do it full-time and push it as hard as I can. Just push it until I get fat, ugly, and bald, right? 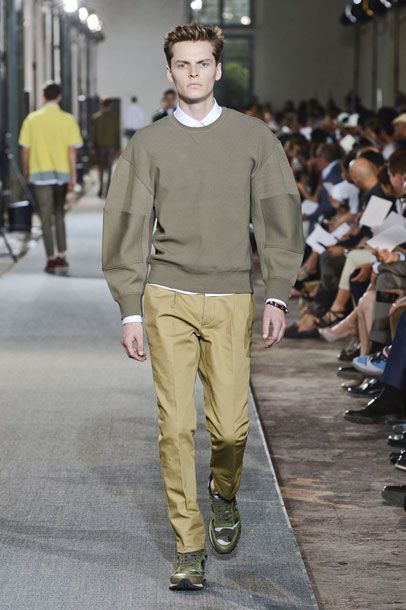 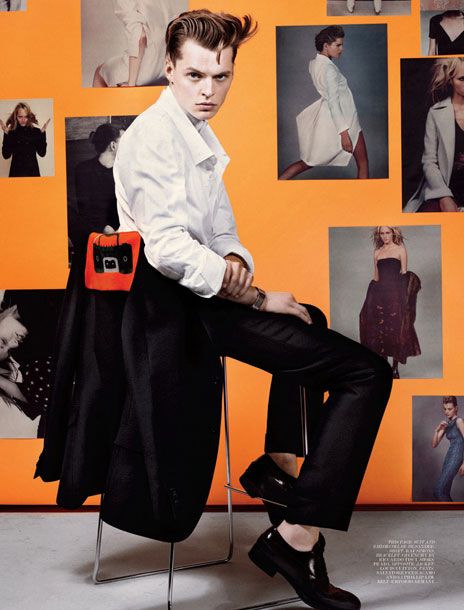 In the June/July issue of Interview magazine, shot by Craig McDean. 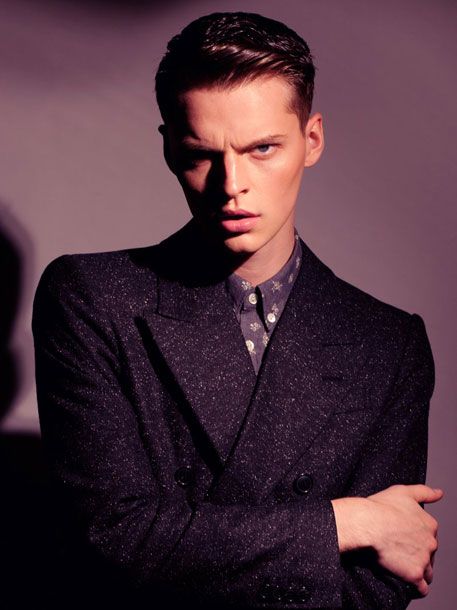 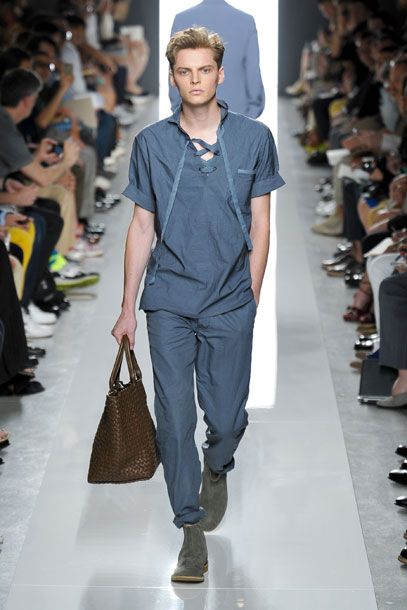 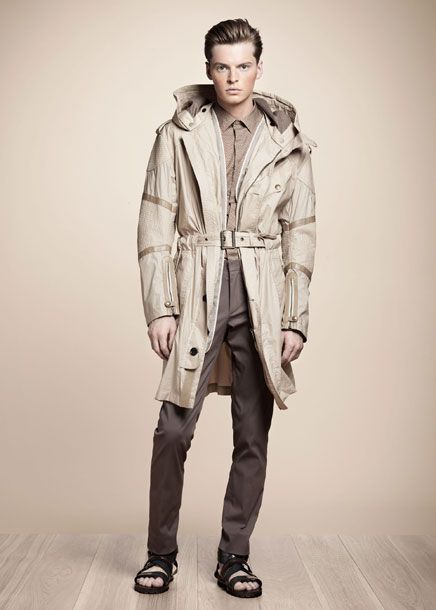 astrology Yesterday at 8:30 p.m.
Madame Clairevoyant: Horoscopes for the Week of October 3 Mercury retrograde has finally ended. Although its effects will take time to wear off completely, we can all breathe a sigh of relief.
By Claire Comstock-Gay
sex diaries Yesterday at 8:00 p.m.
The Writer Staying on Her Crush’s Couch This week’s sex diary.
thanks i hate it Yesterday at 6:08 p.m.
Kylie Jenner’s Bleached Eyebrows Look Very Familiar Kim Kardashian’s little sister is following in her footsteps.
celebrity Yesterday at 4:20 p.m.
Britney Spears’s Mom Apologized to Her in an Instagram Comment “I am soooo sorry for your pain,” Lynne Spears wrote in part.
pfw spring 2023 Yesterday at 2:02 p.m.
The Best Street Style at Paris Fashion Week See our favorite looks from outside the shows, from Crocs to head-to-toe Dior.
By Olivia Luppino
celebrity Yesterday at 12:48 p.m.
Trevor Noah And Dua Lipa Sure Look Cozy A source claimed the pair are “just friends” after they were spotted kissing in New York City this week.
society pages Oct. 1, 2022
Where Art Thou, Adam Driver? Inside New York Film Festival’s Campari-drenched White Noise party.
By Sangeeta Singh-Kurtz
review Oct. 1, 2022
At Loewe, Blurring Reality in a Digital Era Jonathan Anderson questions shape and silhouette in a modern way.
By Cathy Horyn
fashion Oct. 1, 2022
How Bella Hadid’s Spray-on Dress Was Made We were just as confused. So we found out.
parties! Sept. 30, 2022
Microdosing Opulence at the Hermès Block Party The Parisian fashion giant celebrated the opening of its new flagship store in New York.
how does it fit? Sept. 30, 2022
We Tried Ganni’s Top-Selling Pieces on 3 Different Bodies Are we #GanniGirls?
society pages Sept. 30, 2022
Martha Stewart and a Big Fish Stopped by the Tin Building Opening Jean-Georges Vongerichten’s South Street Seaport food hall celebrated its opening with a themed culinary funhouse.
q&a Sept. 30, 2022
Hiam Abbass on Playing Ramy’s Matriarch, Maysa We spoke to the Ramy star about the show’s ambitious third season.
fashion Sept. 30, 2022
Is There Trouble Between Anna Wintour and Edward Enninful? A new report from the Daily Beast hints at unrest between the Vogue editor and her protégé.
always shopping Sept. 30, 2022
Winter Gloves to Buy Before It’s Too Late We spoke with experts to get their favorite pairs.
parties! Sept. 30, 2022
Dua Lipa, Amal Clooney, and More of the Bestest Party Pics This Week Some of our favorite looks from the New York Ballet Gala, a Chanel launch, and other glam events.
power Sept. 30, 2022
Protests In Iran Continue Over Death of Mahsa Amini Despite a brutal crackdown, women continue to take to the streets in defiance of government orders.
the most fertile man Sept. 30, 2022
Nick Cannon’s Quest to Populate the Earth Continues Cannon just welcomed his third child with Brittany Bell.
pfw spring 2023 Sept. 30, 2022
At Rick Owens, an Ancient Muse Plus more from Paris Fashion Week, including a new energy at Schiaparelli.
By Cathy Horyn
friday sales Sept. 30, 2022
20 Things on Sale You’ll Actually Want to Buy: From Disney to Neutrogena Including K-beauty must-haves and a great pair of mom jeans
More Stories