Over the course of one week in August, I paid a total of $244 for the following beauty procedures: mink eyelash extensions, a gel manicure, a bikini wax, two facials, and a two-week course of a scientifically questionable diet supplement. I am on the wait list for an infrared cellulite-removal session.

I did this using Lifebooker, the five-year-old site where salons can sell excess inventory (the appointment hours that aestheticians sit around with no one to wax) at a discount. Users can book cheap, last-minute appointments, and Lifebooker collects a bounty on each bald crotch, retouched root, and trimmed bang.

Posting makeup-free self-portraits to Instagram may be the celebrity PR move du jour, but Lifebooker promises the reverse: Hundreds of thousands of mere mortals use it to dabble in high-tech, photo-shoot-friendly beauty treatments. As a rookie to physical perfection, I joined them. With cutting edge technology and discount economics, could I achieve the fembot look of an Us Weekly fixture?

Twice a day, Lifebooker e-mailed suggestions written in the tone of a passive-aggressive sorority sister:

“Is your great-grandfather Chewbacca or something?” began an offer for laser hair removal.

“Pores are so 2011,” read a coupon for microdermabrasion.

Each e-mail provided a list of things that are potentially wrong with me, stock photos of women who do not share my defect, and a limited-time click-to-buy offer to fill the gap between us.

“We think of beauty as maintenance,” Lifebooker founder Dana Reichman told me when I visited the company’s dog-friendly Dumbo office. She describes beauty procedures as “both essential and ridiculous.” 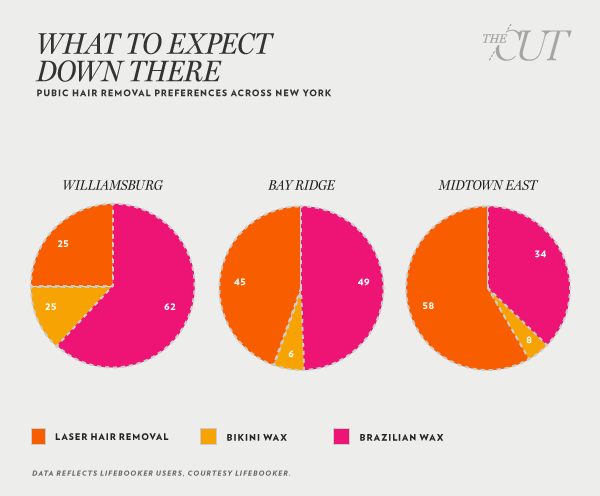 For my first foray into discounted self-improvement, Reichman and co-founder Andrew Unger recommended eyelash extensions — their customers find them “addictive” — so I booked a Saturday afternoon appointment at a nondescript salon in Koreatown. The place was empty except for a procession of young women clutching printed-out Lifebooker coupons ($49, normally $165). They filed into a pair of back rooms and emerged, an hour later, blinking Katy Perry clones.

The last thing I did as an aesthetician taped my eyes shut was request the most natural-looking lash option available. When I woke up an hour later, I, too, was Katy Perry. At a party that night, friends deemed the prosthetics “distracting.” I already can’t imagine what I would look like without them.

My next purchase was an intense pulsed light (IPL) facial. Marked down to $59 from $150, it was performed in an office with a painting of a Chinese woman in a Cultural Revolution–era jumpsuit on the wall.

After strapping a mask over my eyes, the facialist used a spatula to spread a cold gel across my face, which she proceeded to rub with a medical-looking wand. I thought she was conducting an ultrasound exam on my unborn zits until she said, “Let me know if this hurts,” and began to zap my acne scars with a burst of heat and a blinding flash.

Lifebooker users can filter local salon listings by available appointment time, treatment prices, salon locations, and user rating — a revelation for the impulsive look-changer or the seasonal bikini-waxer. But it can also make a girl a little weary — all the onetime encounters in identically dingy salons across town, having to explain how you like it done to a new stranger each time.

I thought a last-minute, pre-vacation wax arranged through Lifebooker was going well until I winced and the motherly Russian waxer responded, with sympathy, “You should do it the same person every time. It’s better that way.” 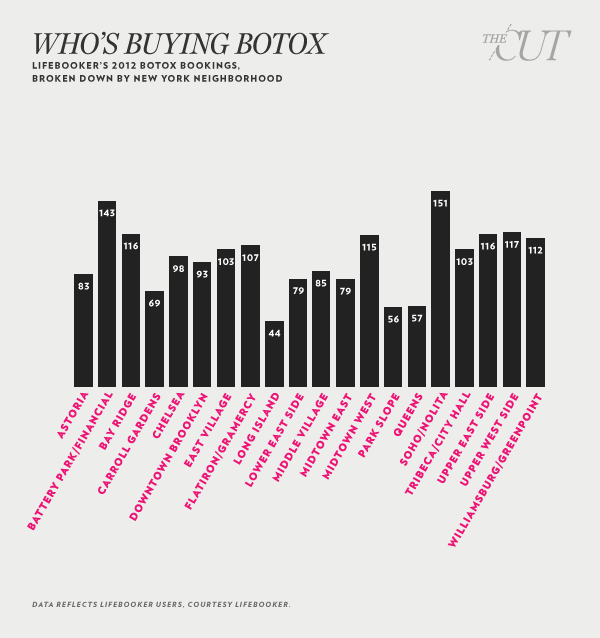 Like much of its small salon clientele, Lifebooker is a family business. Reichman’s father, Arnold, a former partner at Credit Suisse–owned private equity firm Warburg Pincus, began as Lifebooker’s adviser and is now CEO. Her mother, Sharon, is known to deliver snacks to the office. She and Unger met as first-graders at Brooklyn’s Saint Ann’s School. They act like brother and sister.

Reichman and Unger describe the Lifebooker voice as “relatable,” “sarcastic,” “urbane,” and “down-to-earth,” born from late nights writing copy when they were the company’s only employees. (They now have a staff of about 65.)

“You’re removing hair from your crotch,” Reichman said. “How are you going to talk about that?”

Lifebooker e-mails may induce feelings of amused horror, but Ilana Glazer and Abbi Jacobson — the tomboy comediennes behind the web series Broad City, now in development with FX — assured me that team Lifebooker is in on the joke. They used to work in the sales department while moonlighting as writers.

“I sold this noninvasive liposuction,” Glazer recalled. “It, like, squeezes and fucking melts your fat and you — no joke — urinate it out.” 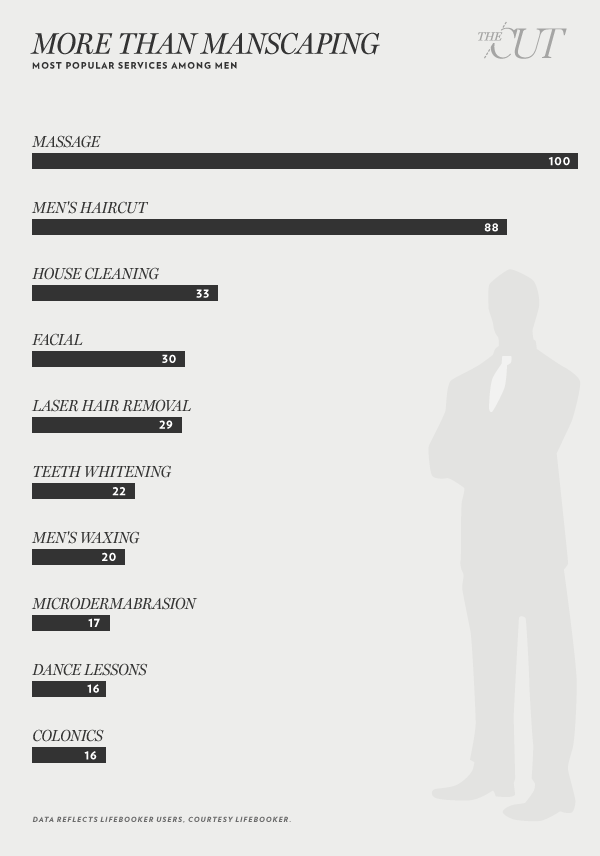 Indeed, the coupon and two-for-one deal format — along with the unflappable Lifebooker voice — has a sort of leveling effect, leaving the impressionable subscriber with the sense that Botox units and Keratin straightening are costs of ownership as routine as the SPF moisturizers and disposable razors advertised in a Duane Reade circular.

Recently, Lifebooker advertised a discount on labiaplasty. (Regularly $6,250, now $2,950, lab fees and surgical garments not included.) I grimaced as I clicked the link. Could Lifebooker make cosmetic genital surgery seem like no big deal?

“Whether it was the little humans you created (you’re amazing!) or all that horseback riding you did in your youth, sometimes you just wanna give your lady business a makeover.”

Asked about Lifebooker’s more drastic beauty solutions, Unger said that, as medical technology improves and costs drop, our standards for routine maintenance might change. It wasn’t long ago, he said, that laser hair removal could only be performed by physicians, who charged thousands of dollars. Now that any beautician can stash a laser in the backroom, Lifebooker sells sessions for $25.

Thinking about beauty in terms of supply and demand can get a little depressing. Demand means people feeling ugly, be it because of Lifebooker’s tough-love copy writing or NBC’s high-definition shots of Misty May-Treanor’s underarm. But while the same tension gives many magazines their consumer subtext, at least on Lifebooker it’s explicit, and on sale.

As I picked off the last of my false eyelashes last week (their lifespan was shortened by a steam facial), I decided not to schedule a replacement appointment. Instead, and perhaps inspired by Misty May-Treanor’s underarm, I explored Lifebooker’s fitness class offerings, which Unger and Reichman say will have their own booking site soon.

I’m not hopeful that they’ll find the cure for feeling physically inferior in my lifetime. But it’s comforting to know that the treatments will come cheap.

Labiaplasty on Sale: My Week With Lifebooker

that's hot 9 mins ago
Paris Hilton Has Her Priorities Straight No president is more important than Britney, bitch.
trendspotting 28 mins ago
The Wedding Trend That’s Too Cool to Care All That Much The too-chill-for-tradition aesthetic.
By Laura Pitcher
power 12:40 p.m.
Ketanji Brown Jackson Is Officially a Supreme Court Justice She was sworn in on Thursday, becoming the first Black woman to ever serve on the bench.
crime 12:10 p.m.
A Mother Pushing a Stroller Was Shot and Killed in Manhattan Investigators say a 20-year-old woman was shot at “very close range” while on the Upper East Side Wednesday night.
life after roe 12:00 p.m.
What Makes People Change Their Minds About Abortion? Pro-choice evolutions can take years, a timeline that feels painfully slow in this post-Roe moment.
life after roe 11:40 a.m.
The Uphill Battle to Codify Roe v. Wade President Biden has called on Congress to make an exception to the filibuster rule so it can reinstate federal abortion protections.
my two cents 8:00 a.m.
How to Find a Financial Adviser And how to know if you really need one.
By Charlotte Cowles
life after roe Yesterday at 5:30 p.m.
Some Hospitals Have Already Stopped Providing Plan B A health system in Missouri says it has stopped providing emergency contraception until the state’s abortion ban is “better defined.”
don't call it a comeback Yesterday at 5:14 p.m.
Cameron Diaz Is Coming Out of Retirement With a little help from Tom Brady.
crime Yesterday at 3:23 p.m.
R. Kelly Has Been Sentenced to 30 Years in Prison “The public has to be protected from behaviors like this,” a judge told the singer.
in sickness and in health Yesterday at 2:40 p.m.
Travis Barker Has Been Hospitalized He’s reportedly being treated for pancreatitis after a recent colonoscopy.
celebrity Yesterday at 2:14 p.m.
Lauren Conrad Reveals She Had an Ectopic Pregnancy “I wanted to share my own experience with lifesaving reproductive care.”
abortion Yesterday at 1:25 p.m.
Meghan Markle Calls On Men to Be Vocal About the End of Roe In a new conversation with Vogue, she spoke about the devastating impact of the SCOTUS ruling.
shopping Yesterday at 1:17 p.m.
What to Expect From the Nordstrom Anniversary Sale Deals incoming.
skin kare Yesterday at 1:08 p.m.
Kim Kardashian Is Being Sued Over SKKN A Black-owned beauty brand filed a suit alleging copyright infringement.
wedding etiquette Yesterday at 1:00 p.m.
The Bride and Groom Formally Request That You Dress Up The tyranny of wedding dress codes.
By Kayleen Schaefer
are u coming? Yesterday at 1:00 p.m.
You’re a Star on thecobrasnake.com! “It feels like 2007 again.”
By Brock Colyar
rtw fall 2022 Yesterday at 12:54 p.m.
Liberated From the Fashion Grind, Marc Jacobs Finds a New Tension On Monday night, Jacobs showed a collection deeply in touch with the digital world.
By Cathy Horyn
edgy haircuts Yesterday at 12:13 p.m.
Did Bella Hadid Shave Part of Her Head? Here’s how she actually got that Marc Jacobs look.
career Yesterday at 12:00 p.m.
‘Do I Have to Tell My Boss I’m Going to Rehab?’ No, you don’t. But can we talk about why you’re asking?
By Ana Marie Cox
More Stories