In January, artist Richard Phillips — known for his lush, hyper-realistic oil paintings of figures in pop culture like Taylor Swift, Leonardo DiCaprio, and Kristen Stewart — photographed Adriana Lima for Visionaire magazine’s 3D Rio project. Last year, he created a short film with Lindsay Lohan, titled First Point, that was displayed at Art Basel in June. Now he has incorporated these works into a new series of paintings, on view starting tonight at the Gagosian Gallery in New York. We caught up with him over the weekend about the show.

You always paint from pictures, so working with live models is new for you — now that you’ve worked with Adriana and Lindsay, how do you feel about working from life versus working from a photo or an illustration?
Working with Adriana, I was a bit nervous. She’s so powerful — really an entity, in a way. It gave me more admiration for photographers that do that sort of thing professionally. There really is a sense of direction and confidence that inspires the model. There were some humorous moments where I had to go over the poses I wanted her to do by getting into those poses myself, which my assistants got a good laugh at. But it was only after I went through a few of the pose sequences that I felt comfortable and was able to really talk about how to do that.

So what was it like to work with Adriana?
These photographs were not easy to do, and required her skill to strike and hold complicated poses for quite a long time. You meet her and there’s a generosity of spirit and very friendly and easy manner, and then all of sudden, the lights go on, and you realize you’re working with this absolutely extraordinary person who’s capable of creating these powerful images. It was my first time ever working with a fashion model. I shot her back in January, and days later, she appeared in no less than four Super Bowl commercials. I was sitting with friends and I mentioned I had just worked with her, and they were like “What?!” She really is flawless. We did a lot of postproduction work on the background of the photographs, but really none on her.

Was she pregnant when she posed?
I don’t believe so. Well, she may have been very early on and not known. I think only gave later, a week or so later, an announcement. That was really wonderful to hear. She certainly wasn’t showing any signs around the time of the shoot, as the paintings will bear out.

Tell me about the paintings.
It was understood from the beginning that the shoot would function as a way to capture images that I would then be using to create paintings. The paintings are meant to be physically overwhelming. They’re upwards of eleven feet tall, and in some cases past twelve feet in width. They’re meant to do what oil painting is meant to do, which is to do exactly what photography really can’t — which is to re-actualize lived experience in a poetic sphere. My goal was to turn up the volume on the visual imagery of Adriana as far as it could go.

Do you ever get apprehensive about showing your subjects the paintings you’ve done of them?
I haven’t really done that many paintings where that opportunity comes up. I have to admit that, you know, you always have a sense of excitement about getting their reaction. But I’m really proud of how these turned out. They are very vivid, and they’re also quite out-scaled. It would be like seeing yourself very big. But it’s different from photography because it’s not that click away from reality — it’s something entirely constructed, by me, by hand.

It’s not like you had a shared moment, as one does in photography.
No, it’s hours and hours and hours alone in my studio creating the image and painting it away from the model. It’s that second phase of image construction — at least the way that I do it with my artwork — and that is very solitary construction. 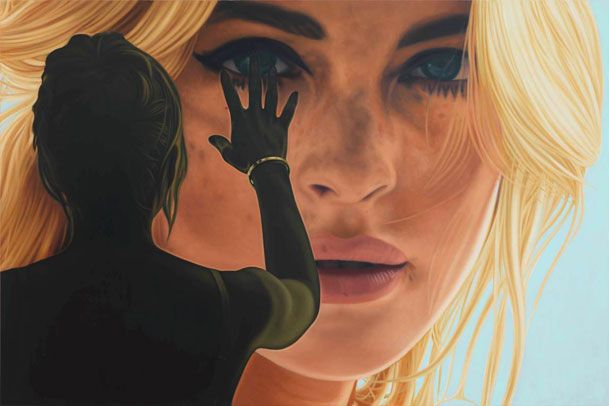 Richard Phillips’s works will be on view at the Gagosian Gallery at 555 West 24th Street from September 11 to October 20, 2012.

tv 3:30 p.m.
Excuse Me, Who Is This British Baking Show Hunk? Hellooo, Sandro!
divorce rumors 3:20 p.m.
Gisele Bündchen and Tom Brady May Be Over for Good Bündchen was spotted burning sage outside her car.
5 questions with... 2:44 p.m.
Scarlett Johansson on Her Beauty Regrets and Her Closet Full of Coats Beauty founders Scarlett Johansson and Kate Foster discuss the challenges of a “clean beauty” brand.
nope! 2:33 p.m.
Great British Bake Off’s Mexico Week Is As Bad As It Sounds You’d think contestants would know how to eat a taco — or at least how to pronounce “guacamole.”
gone sale-ing 2:26 p.m.
Here’s How to Shop Target’s Deal Days Prime Day who?
excerpt 1:00 p.m.
Dreaming to Decolonize: An Excerpt From Rest Is Resistance “To rest in a DreamSpace is a red brick through the glass window of capitalism.”
hilary swank 12:46 p.m.
Hilary Swank Is Pregnant With Twins “It’s such a blessing. It’s a total miracle. It’s unbelievable,” said the actor.
obsessive tester 12:36 p.m.
The 9 September Beauty Launches We Tried and Loved Last month was a lot.
celebrity 11:57 a.m.
Britney Spears Does Not Accept Her Mom’s Instagram Apology “I am soooo sorry for your pain,” Lynne Spears wrote in part.
power 11:56 a.m.
The Herschel Walker Campaign Keeps Getting Messier The “pro-life” candidate’s own son denounced him following reports that he’d paid for a girlfriend’s abortion.
power 10:45 a.m.
All of the Allegations Against Kevin Spacey The actor is on trial in New York for battery and intentional infliction of emotional distress.
crime 10:42 a.m.
38 People Were Killed in a Day-Care Shooting in Thailand Including more than 20 young children.
awards 10:14 a.m.
Autofiction Writer Annie Ernaux Awarded the Nobel Prize in Literature Best known for her memoir The Years.
my two cents 8:00 a.m.
‘I’m a New Parent and Our Finances Are a Mess’ You need a loose, forgiving plan that helps you feel more in control.
By Charlotte Cowles
first person 7:00 a.m.
My Childhood Under Northern Ireland’s Abortion Ban Where do its consequences begin and end?
By Rachel Connolly
rust Yesterday at 5:50 p.m.
Everything We Know About the Rust Shooting An FBI report concludes that the trigger must have been pulled.
sure why not Yesterday at 4:49 p.m.
Are Brad Pitt and Emily Ratajkowski Really Hanging Out? Rumor has it EmRata has “the vibes that Brad likes.”
soho grifter Yesterday at 4:34 p.m.
Anna Delvey Is Getting Out of Jail Having “demonstrated interest in pursuing legitimate employment in the United States,” a judge ruled.
pfw spring 2023 Yesterday at 4:26 p.m.
The T-shirt, Beloved by All, Gets a New Look By Miu Miu, nonetheless. Plus: Louis Vuitton shows a trove of great accessories.
By Cathy Horyn
what the what Yesterday at 4:16 p.m.
Carrie Is a Pigeon Lady Now Is that a real-life bird? No, it’s an $890 designer clutch.
More Stories