A look from episode 8. Photo: Lifetime

Before we get started, here’s a nice update on the story of Ven’s bullied client Terri from a couple of weeks back: She’s said on Twitter that because of the response she’s gotten from fans of the show, she’s never felt more courageous or confident.

Moving on! The designers meet Heidi at the runway, and she asks who’s good at negotiating. They all raise their hands. (Spoiler alert: Most of them are wrong.) Heidi then sends the designers to the workroom, where Tim is waiting with the details of their challenge and plenty of arts and crafts supplies. Elena, still gunning hard for this season’s Best Attitude award, announces, “I don’t like sparkles. I don’t like glitter. I don’t like any of that shit.” Tim tells the designers there’s no budget to shop at Mood this week; instead, they’ll create and sell T-shirts and tote bags to sell on the street to raise money. Tim also tells the designers that they could offer fashion advice or do alterations to raise funds; depressingly, none of the designers take him up on this.

And, much to the chagrin of the designers, it’s a team challenge! Tim uses the button bag to pick teams, and it’s Christopher, Gunnar, and Sophia; Melissa, Ven, and Fabio; and Dmitry, Elena, and Alicia. When Dmitry walks over to join Elena, he exclaims, “My love!” Then, off-camera, he laments, “What did I do in my past life to deserve this?” The designers still don’t know what the actual challenge will be, but it’s legitimately fun to watch them to watch them make crafts to sell — Sonjia’s spray-paint-stenciled T-shirts and Ven’s jersey-and-notion bracelets are standouts, while Elena calls her team’s efforts “the most homeless looking T-shirts I’ve ever seen.” Dmitry’s responds, “SHE’S LIKE WALKING DEPRESSION.”

The teams hit the streets to sell their wares (it’s roughly as difficult as one would expect selling shirts in the middle of New York to be), and in the end Christopher’s team raises $684, Dmitry’s team raises $500, and Ven’s team raises $800.48. In an oddly humane touch, the designers are sent home for a good night’s rest after their day of street hustling; the next morning, Tim introduces the true challenge: The teams must create two looks for fall, and at least one look has to include outerwear. After some strategizing, it’s off to Mood, where it’s revealed that Mood has an in-store dog named Swatch. How does that dog not have its own series yet!?

After the teams have had some time to work, Tim sweeps into the runway with a “How is everyone?” When the designers’ response is mumbled, he frowns and says, “Boy, THERE’S a tone of enthusiasm.” When he meets with Alicia, Dmitry, and Elena, he’s generally underwhelmed, but when Dmitry shows him the exposed darts on his dress, Tim actually jerks his head back and forth like he’s being electrically shocked. Trying to recover gracefully, he says, “I mean … it’s a point of view.” He moves on to Fabio, Melissa, and Ven, and is delightfully pleased about how he’s inadvertently said their names in alphabetical order. Then he calls out Ven’s skirt, and it’s delightful to hear SOMEONE this season tell Ven to stop doing the exact same thing in every challenge. Meanwhile, Christopher, Gunnar, and Sonjia already have finished work on their dress forms, and even if Elena thinks some of it looks like “ugly ass Snuggies,” that’s far better shape than any other team is in.

And, just like the past few challenges (team or otherwise), it’s Elena’s moods that govern the workroom. “To kill the witch,” Dmitry says, “we need a silver bullet and a wooden stick.” This is factually inaccurate — that’s how you’d kill a vampire-werewolf hybrid — but points for hilarity, Dmitry. Later, she half-apologizes for being angry on the runway, and he points out that she essentially wakes up angry. There are moments when their Boris and Natasha banter (as Christopher described it) is funny, but a lot of the time, Elena is difficult to watch, and I think that’s because of how staunchly she’s asserted that she absolutely has to be this way in order to survive as a designer. That’s just not true. Intensity is a necessity. Anger isn’t.

Down at the runway, the judges (joined by Anna Sui), deem the efforts of Gunnar, Christopher, and Sonjia “the clear winner” of the challenge, and Sonjia wins the top spot for her impeccably tailored, expensive-looking jacket. The judges weren’t fond of any of the other teams’ looks, but ultimately, Alicia’s unimpressive pants result in her elimination.

Click through the slideshow to see all of this week’s looks. Did Alicia deserve to go home when Elena’s behavior was so monstrous? And who’s destined for a meltdown next week? 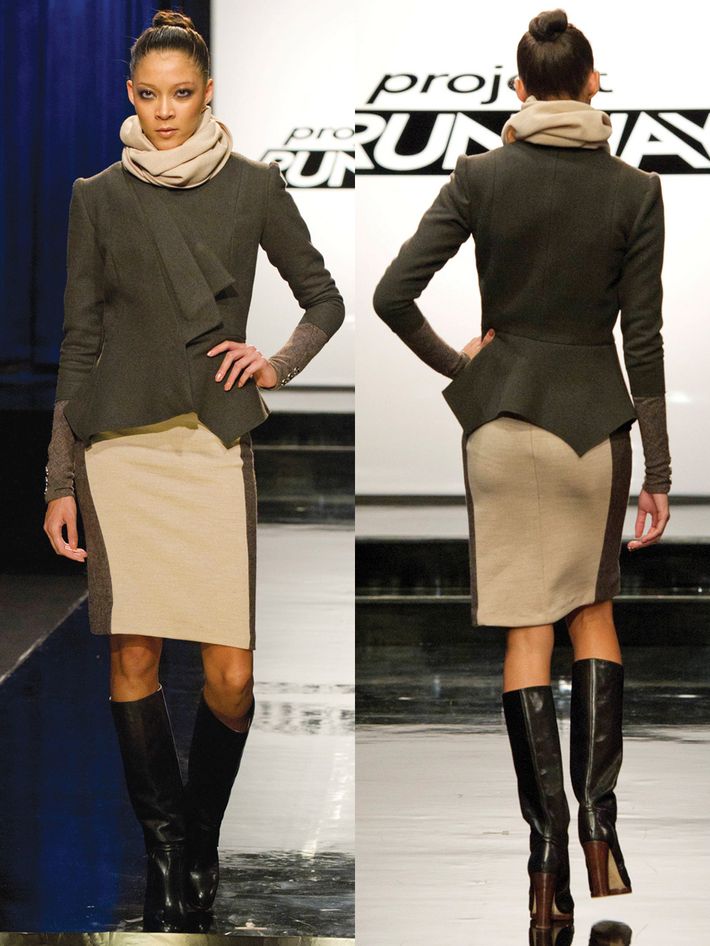 Christopher called the evolution of Sonjia’s hunter green jacket (which began as a vest) Peter Pan to Tinkerbell to Legends of Zelda, but the end product was really stunning. Michael used it as evidence that the team had taken the money they raised and spent it really wisely; they bought expensive fabric and used it correctly. I’m pleased to see Sonjia back on top after a few rocky weeks, and impressed that she stood her ground against Tim, who wondered whether the sleeves she’d planned would be too showy. This was absolutely the most cohesive, wearable, well-styled look of the bunch.

Christopher’s camel hair coat got almost as much praise as Sonjia’s jacket did, particularly because he chose a really difficult fabric to work with, but still carried it off really well. Nina called it the most editorial piece on the runway and thought it would photograph particularly well. That said, this look as a whole didn’t work for me as well as the other winning look did – it reads a little too superhero, and the leather is a bit much. Still, Gunnar’s work on both dresses was very strong, and the judges pointed out how impressed they were that he’d taken on the challenge of two pieces after his time in the bottom last week. I was also impressed that he used “pugnacious” correctly! 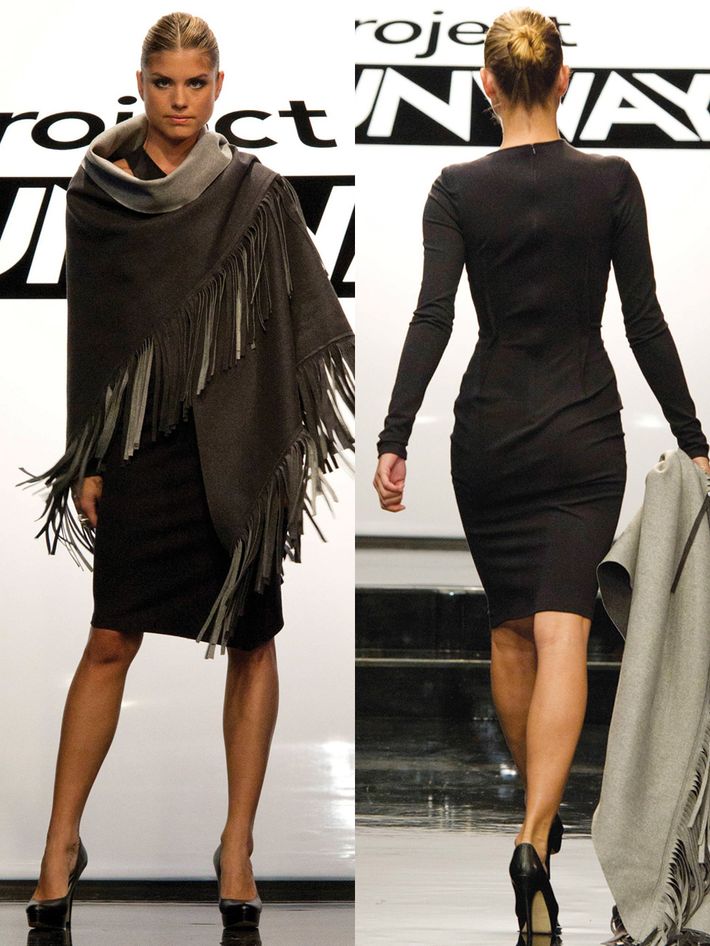 One of the major criticisms Anna Sui leveled against Dmitry’s team is that Dmitry overtook too much of the work, and that’s true – he was the only designer on any of the three teams to do a complete head-to-toe look himself. Michael praised the neckline of the dress but hated the shawl, and Heidi called the dress the only good-looking piece in their collection. What concerns me is that the shawl is the first “something different” we’ve seen from Dmitry and it wasn’t particularly strong; that’s worrisome in the point in the competition with no middle left to hide in. 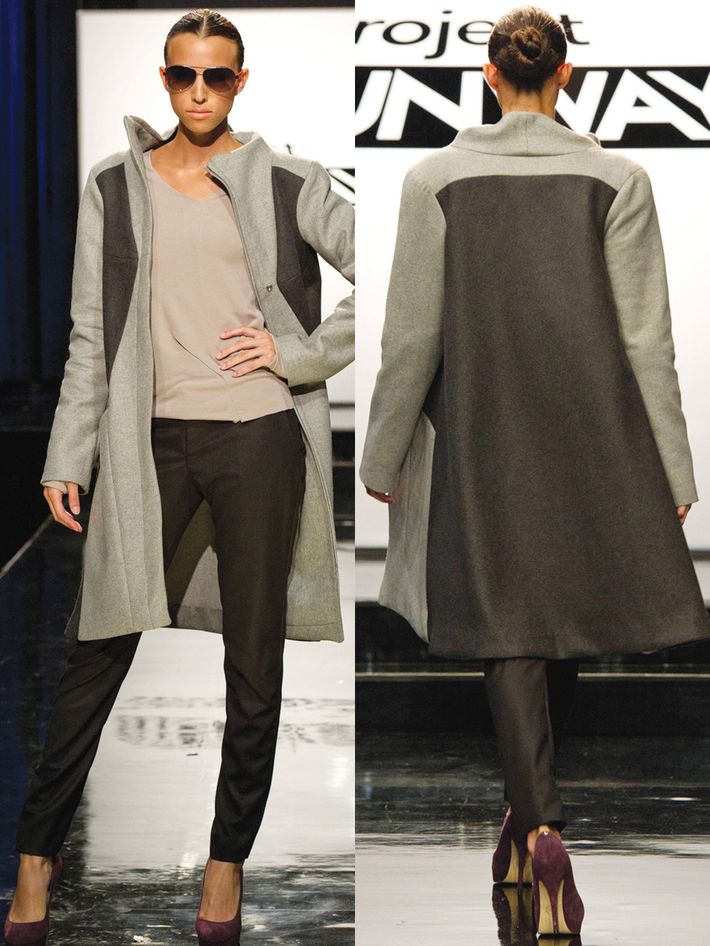 The tailoring of Alicia’s pants and top sent her home – the crotch was so improperly sized that Michael joked that it looked like it “left room for something that it didn’t need to, since she’s a girl.” But while her designs were mainly just dismissed as boring, Elena’s were way more specifically criticized. All of the judges asked why she hadn’t been able to make a more cleanly designed coat if it was the only thing she was doing, and she had excuses (a different model, the time crunch) but no real answers, and the coat looked far too voluminous. The most cutting moment was when Nina said – in the way only Nina can – “She thinks she’s some great designer who’s so avant garde!” 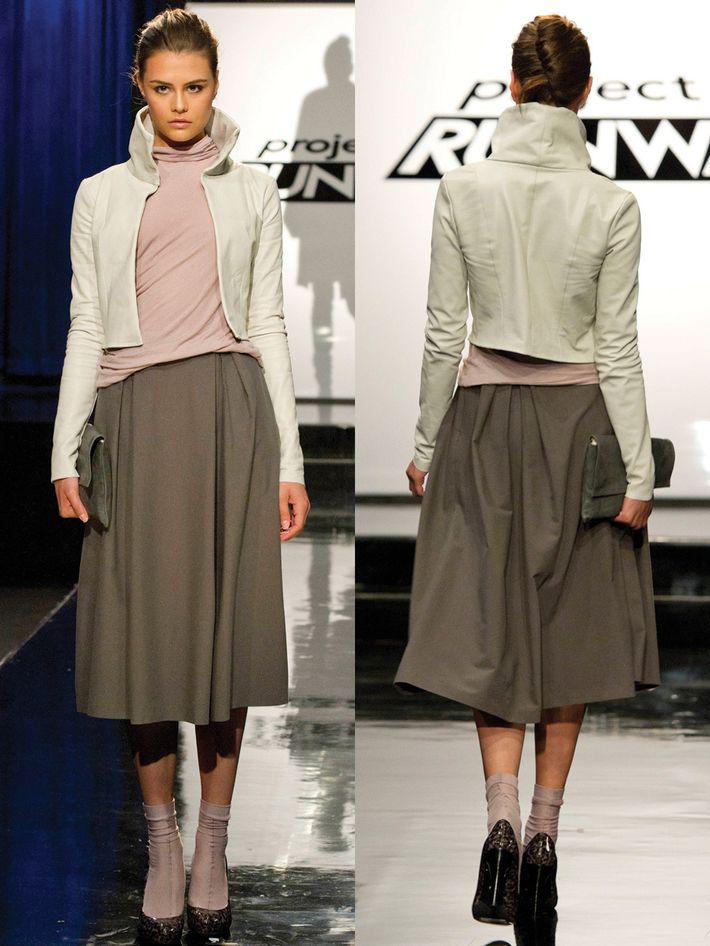 Melissa’s white leather coat was the judges’ favorite piece from these looks. Nina thought it fit beautifully, and said that the pop of white the jacket brought to the collection made the color palette feel fresher and more unexpected. Melissa made the clutches as well, but it’s hard not to wonder how much of the $800 her team raised went toward the nicer leather, and whether the collection as a whole could’ve been a bit more successful if they’d allocated funds a little differently. Michael did point out that it was odd that the team with the most money had the cheapest-looking collection. 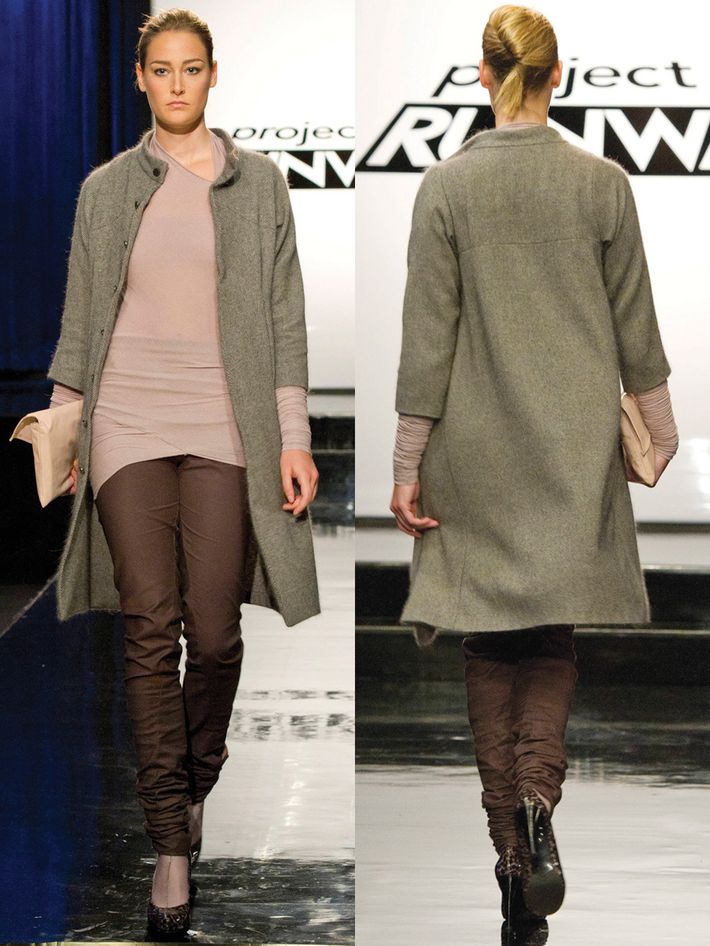 Fabio’s mohair coat took a lot of criticism for looking unfinished, although Nina praised it for being light and having the look of a sweater. Michael compared it to an old lady’s housecoat and asked if there were Kleenex in the pockets. But what was particularly interesting was the judges’ criticism of them – they rightly pointed out that none of the clothes his team sent down looked like anything he’d make. We’re getting closer and closer to the end, and he still hasn’t shown the judges – or us – what he can do aside from pleats and florals and pastels.

celebrity 19 mins ago
Kim Is Really Trying to Make Beach Gloves a Thing Kim Kardashian is on the 2022 Sports Illustrated “Swimsuit” issue wearing a nude bikini … and matching opera gloves?
parenting 1:10 p.m.
Formula Is a Lifeline The conversation around the shortage reveals how misunderstood formula feeding remains.
By Erica Schwiegershausen
celebrity 12:49 p.m.
I Really Don’t Need Any More Info About Megan Fox and MGK’s Sex Life This week, they apparently cut a hole in her jumpsuit to have sex.