Introduced in 1992, Thierry Mugler’s first scent, Angel, was a game-lchanger in the fragrance world. The bold, brash bottle (it was blue! and star-shaped!) looked like nothing else in the department stores. And the scent itself was unapologetically sweet and rich, with notes of vanilla and chocolate. (It’s considered to be the first “oriental gourmand” fragrance.) The ad campaigns, initially photographed by Mugler himself, were also iconic in their own right. The house’s creative director, Christophe de Lataillade, oversaw all the campaigns, including the 1992 ad starring Estelle Lefébure hanging off the edge of a Manhattan skyscraper and the 2008 ad starring a secretly pregnant Naomi Watts. De Lataillade (who translated French romance novels before he was hired as Mugler’s assistant 25 years ago) is still with the brand, and this year, they’re celebrating the scent’s twentieth anniversary. Click through the slideshow to see some of the most iconic images and hear de Latilade’s behind-the-scenes stories.

“I can’t remember the building, but it was near Times Square. Estelle was wearing a very tame Mugler black suit and blue scarf. Security guards in America are much stricter than they are in Europe, so I always had to distract them so that Thierry could have Estelle get much closer to the edge than they would allow.”

“We shot this in White Sands, New Mexico. Apparently Jerry had been visiting her family in Texas at the time, so she told me, ‘I will make my arrangements, just tell me where the hotel is.’ The day of the shoot, a huge white stretch limo appeared with a chauffeur who looked like a pimp or something, all dressed in white with white crocodile boots. Jerry came out and had big Vuitton trunks filled with lingerie with her. She spent her evenings doing fittings with her own lingerie in an ugly little motel in Alamo Gordo. That was the sort of thing she did.”

“This time Thierry’s idea was that Amy would be like a living crystal, surrounded by crystals. So we built a kaleidoscope-like cube so that it looked like she was trapped. And she actually couldn’t move once inside the box.  Thierry’s famous corset-maker, Mr. Pearl, who did all his campaigns and runway shows, had made the dress. It was an extremely tight corset, and when you’re wearing it you can hardly breathe. So we had to take a lot of breaks. Otherwise, I don’t know if Amy would have survived the ordeal.”

“Thierry had imagined a story of a girl who wants to escape this world that she’s not pleased with, so she takes refuge on top of a skyscraper. What you see in the ad is a backdrop that’s actually a combination of Hong Kong and Tokyo — we were very inspired by Blade Runner. We shot this in a rented movie theater in Paris because we couldn’t find a studio that was large enough to accomodate the fake rooftop we built with lights under it. It was so hot that we called it ‘the toaster.’ We could only leave her on it for 30 minutes, otherwise she would have been burned.”

“Thierry had imagined a maze of mirrors that would be a sort of pool of water at the same time, so we built the whole set in New York, in one of those big studios near the pier on 16th Street. She’s wearing the same dress that Amy Wesson was wearing a few campaigns earlier, except that we had made it lighter by removing some of the sequins and crystals. You actually don’t see her directly in the picture, just her reflection in the mirror. That’s what Thierry was interested in capturing in the image — narcissism.”

“We met Naomi in Milan for a fitting in December before the shoot. I went with Mr. Pearl because he’s a maniac and he takes an average of 85 measurements. Then about a month before the shoot I had to do another fitting with Naomi; this time she was in New Zealand. So I flew to New Zealand and found she had put on a bit of weight. When I got back to Paris, I told Mr. Pearl about it, then when we went back to Los Angeles for the shoot, again it happened that the dress seemed too small. Naomi said nothing; we sort of made do. We found out months later that she was actually pregnant during the shoot.”

“The ad was shot by Inez Van Lamsweerde and Vinoodh Matadin in New York. Eva is nothing like Naomi at all. Naomi is really an actress who does a little modeling, while Eva is a professional of her own body with an immense knowledge of how to look and what suits her best, so it goes really fast with people like her. On the shoot, she was dancing and extremely energetic. We’re so used to photo shoots that last for days, but we shot her in three to four hours.” 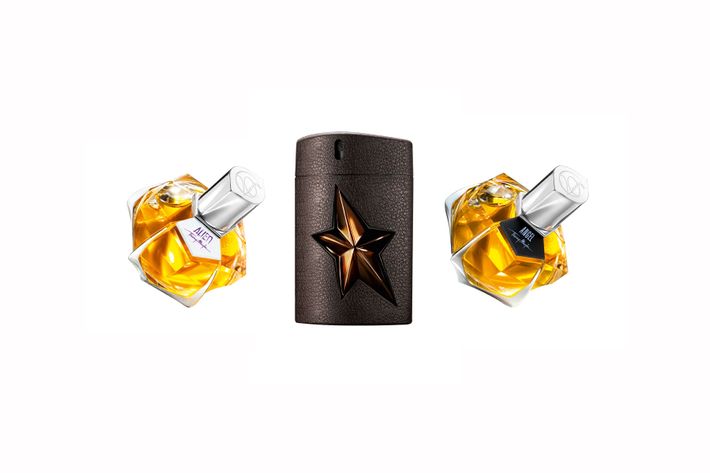 To commemorate the anniversary, the fragrance house has taken three of their fragrances — Alien, A*Men, and Angel — and aged them in leather tanks to create richer, deeper versions of the scents. The rawhide is a nod to the corsetry and S&M-inspiration behind so many of Mugler’s collections. ALIEN Fragrance of Leather, A*MEN Pure Leather, ANGEL Fragrance of Leather, $88 each, Thierry Mugler

self 1 min ago
I’m Tired of Explaining Why I Don’t Drink We have to expand our language beyond “sober.”
By Sarah Wood
remembrances 12:39 p.m.
The Fashion World Remembers André Leon Talley Designers, writers, and celebrities paid tribute to the inimitable fashion icon, who died on Tuesday at 73.
vampires 12:08 p.m.
Megan Fox’s Engagement Ring … Bites? “The bands are actually thorns. So if she tries to take it off, it hurts.”
celebrity 11:03 a.m.
Tracing the Ongoing Feud Between Britney and Jamie Lynn Spears Things spiraled out after Jamie Lynn went on Good Morning America to promote her new book.
style 9:35 a.m.
Anna Wintour Remembers André Leon Talley The Vogue editor mourned her friend and former colleague, calling him “a brilliant and compassionate man.”
in memoriam 8:33 a.m.
André Leon Talley Has Died The former Vogue creative director and editor passed away unexpectedly this week at the age of 73.
culture Yesterday at 8:10 p.m.
There Really Is a Coordinated Online Attack on Meghan Markle A new analysis found that the Duke and Duchess of Sussex were the targets of a strategic, monetized social media campaign against them.
euphoria Yesterday at 6:31 p.m.
8 Pieces You Can Shop From Episode 2 of Euphoria By Kim Shui, Réalisation Par, Nodaleto, and more.
fashion Yesterday at 6:24 p.m.
All Signs Point to a Big Year Ahead for Aimé Leon Dore The cult menswear brand has a New Balance collection in the works and LVMH money in its pocket.
engagements Yesterday at 6:13 p.m.
What Is Machine Gun Kelly Hiding? The story of his proposal to Megan Fox isn’t adding up.
the grammys Yesterday at 4:56 p.m.
The Grammys Are Back On The awards show has been pushed to April — and will now take place in Las Vegas.
health Yesterday at 4:45 p.m.
Everything to Know About Rapid At-Home COVID-19 Tests Americans are finally eligible to receive free rapid tests.
power Yesterday at 2:09 p.m.
The New York Post Gets Its Own Tabloid Scandal A former top editor sues, saying the paper’s notorious former boss was welcomed back after sexually harassing her.
By Shawn McCreesh and Angelina Chapin
movies Yesterday at 2:00 p.m.
Daniel Radcliffe, We Are Ready for Your Music Career The actor will be portraying Weird Al in an upcoming biopic.
the bigger picture Yesterday at 1:34 p.m.
Wrestling Has a Dark Side. But for Some, It’s a Safe Space. Photographer Sofie Vasquez spent a year traveling the country, documenting the indie-wrestling scene.
By Bindu Bansinath
keeping up with the royals Yesterday at 1:29 p.m.
Uh, Prince Andrew Has a Teddy Bear Collection? A new documentary claims he yelled at staff who didn’t arrange his stuffed animals to his liking.
dinosaur bones Yesterday at 12:48 p.m.
This Is a Truly Surreal Zoom Background Dwayne “the Rock” Johnson made a recent TV appearance sitting in front of an enormous dinosaur skull named Stan.
recommendations Jan. 17, 2022
We Should All Be Wearing House Shoes A foolproof way to avoid bringing a dustpan’s worth of dirt into your bed.
k-i-s-s-i-n-g Jan. 17, 2022
Lexi and Fez, Sitting in a Tree Could this be Euphoria’s most unexpected romance?
buzz buzz buzz Jan. 17, 2022
All Our Burning Questions From the Yellowjackets Finale Some of the biggest mysteries remain unraveled.
More Stories