The Artificial Hymen Kit is exactly what it sounds like: Sealed in silver packages and nestled in a bed of pink satin in a small wooden box, the kit contains two “prosthetic membranes.” They will “restore your virginity in five minutes with this new technologically advanced product. Kiss your deep dark secret goodbye and marry in confidence,” says the advertisement at HymenShop.com. For 30 dollars, Hymen Shop ships from Hong Kong to just about anywhere in the world. Simply click, buy, insert, and voilà: virginity restored.

When I broke my first, real hymen in my teens — during an over-the-jeans dry-humping session with Lord of the Rings: The Return of the King playing in the background — I wasn’t even aware it was happening. So test-driving the Artificial Hymen Kit was an opportunity to lose my virginity all over again.

After sacrificing one hymen to The Cut’s photo lab, I arrive at my boyfriend’s house with three “prosthetic membranes” in my purse. Despite a request that I wine and dine him in exchange for participation, I find he has cooked dinner and is drinking wine while playing video games with intense focus. He can do whatever he wants tonight because he’s lending his penis to science, journalism, and, worst of all, to the Internet, where his mother and seventh grade math teacher will have access to it. 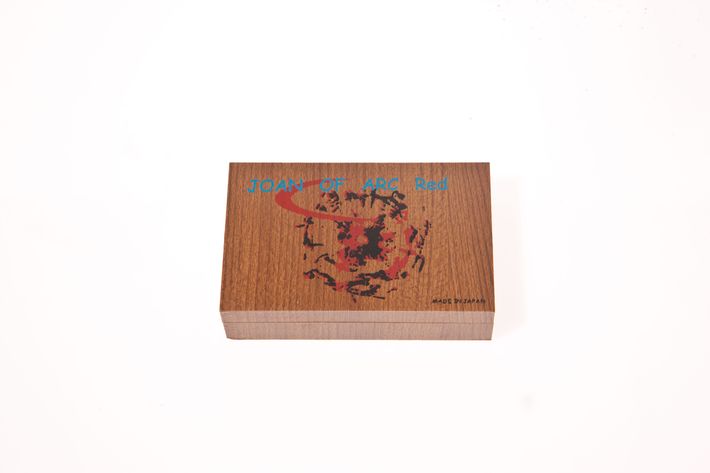 The directions on my Artificial Hymen Kit (color: “Joan of Arc Red”) are printed in Chinese on the inside lid of the box. Translated into English for my benefit, they explain there is a fifteen-minute window after the fake hymen has been inserted to have sex. This vagina will self-destruct in fifteen minutes. After a brief bedroom warm-up session with my boyfriend, I excuse myself to the bathroom, kit and instructions in hand.

I open the first packet and take out what looks like a clear plastic Listerine strip folded into eighths. There is a gruesome amount of bright red liquid inside the folds. I “completely unfold the hymen,” as step No. 4 in the instructions indicates. Some dried-up flakes of red fall from the plastic. I don’t remember red dust at my original hymen-loss, but maybe every hymen-loss is a snowflake unto itself: a tiny and unique horror story floating in the wintertime of our innocence.

“Using an index finger, insert the artificial hymen into the vagina.” Before I can decipher whether the hymen should go in blood-side up or blood-side down— rolled up like a joint? crumpled into a ball?— the film dissolves in my hands. I am covered in bright red dye. I am down one hymen. There is red on every surface of the sink. CSI: New York will need the whole hour to solve this one.

I tear open the next packet, panicked that the clamminess of my hands will ruin my second fake hymen. Dissolve once, shame on me. Dissolve twice, and — oh God, what am I doing with my life?

With some prodding, I stuff it in my vagina like decorative tissue paper in a fancy gift bag, blood-side down. The film clings to my finger, now the color of a red-velvet cupcake. As I Lady Macbeth my hands in the sink, I start to laugh maniacally. Nothing is funny. Fearing laughter will shake my hymen loose, I sprint back to the bedroom in search of a horizontal position.

I discover my boyfriend has spread a red and white beach towel beside him on the bed. It says PUERTO RICO. He got it on vacation with his family, he tells me.

Missionary is the only option here. During the delicate deflowering process there is no need for the Funny Business. As soon as he’s in, I shriek-yodel question after question: Can you feel it? Is it gross? Does it hurt? Should we stop? Are we breaking up? Are you mad at me? What are you thinking about? What about now? Can you feel it? What about now? I sound like a squawking turkey.

My boyfriend answers all of the questions in the order they are received: He can’t feel it. Everything feels normal. He’s not mad. We’re not breaking up. Mostly he’s just thinking about sex. Still can’t feel it. No, not even now.

I can’t feel that slimy piece of plastic, either. I worry it has been pushed further inside me, but after seeing how quickly the first one melted, I know it must be gone.

Soon our banter has dissolved like the fake hymen in my vagina, and we are quiet. Me because I am imagining the Magic School Bus journey my liquefied hymen is making through my body, and him because he is just having regular sex with me, and we generally don’t “riff” when we’re doing that.

Then we are done. Our crotches look like the inside of a lava lamp.

Red Medical Food Dye (the official term, according to Hymen Shop Support staff) is smeared everywhere: his genitals, my genitals, the towel, our hands, and somehow on a T-shirt on the floor. He tells me there is a red thumbprint on my butt. We go to the bathroom to clean ourselves. While scrubbing, we discuss and process what just happened.

First, we conclude, the “hymen” part of this device is besides the point. What’s to break? It dissolved instantly. But does that matter? I don’t know anyone who’s actually felt a hymen break mid-intercourse, and suspect that those utilizing the artificial hymen in earnest don’t, either. (Except for the fetish stars, maybe. But I doubt they mind illusion.) My e-mail buddy at Hymen Shop explains, “The first and foremost purpose of the artificial hymen kit is to provide the visual effect human being blood coming out of the vagina as a proof of virginity. The ‘breaking’ sensation in the intercourse is a second priority, and it’s an elusive one since it is very subjective with the individual man and the construct of the female hymen.”

My boyfriend and I agree, however, that enjoyable sex is still possible, even when both parties are covered in fake blood the color of cherry Kool-Aid.

The next morning, other than the fact that I am still peeing bioluminescent cake dye, nothing unusual is going on. (Except, yikes, that is extremely unusual. I vow to drink a lot of water.) In a fit of curiosity, I load myself with the final remaining hymen and ride a bike. Kool-Aid for everywhere. I can only assume the same is true for horseback riding, pogo sticks, and every other hymen-breaking activity from the Judy Blume canon.

Later that afternoon, I get a text with the following: “My bathroom is covered in red dye. It’s all over the floor and the rug and shower. There must have been a huge blob of it somewhere that we smeared everywhere.”

Sex With a Fake Hymen

sex diaries 8:00 p.m.
The Creative Director Getting a Little Tired of Feeld This week’s sex diary.
snl 3:48 p.m.
Michael B. Jordan Is a Different Kind of Jake From State Farm See him rock the red polo and khakis on SNL.
celebrity couples 12:28 p.m.
This Good Morning America Romance Keeps Getting Messier Amy Robach and T.J. Holmes are out at ABC.
astrology 8:30 a.m.
Madame Clairevoyant: Horoscopes for the Week of January 30 The overarching astrological story right now is one of growth, action, and following through on intentions.
By Claire Comstock-Gay
tyre nichols Yesterday at 6:07 p.m.
Memphis Police Disband Controversial SCORPION Unit: Updates One day after the city released footage of Tyre Nichols’s arrest and beating, the police department deactivated its embattled violent crimes unit.
spring fashion Jan. 27, 2023
12 Ways of Looking at André Leon Talley The friendships and love stories found inside his estate auction, as told by Anna Wintour, Marc Jacobs, and Tom Ford, and more.
By Cathy Horyn
wait what is happening on tiktok? Jan. 27, 2023
Everything We Know About TikTok’s Lashgate Drama Did Mikayla Nogueira add false lashes or not?
parties! Jan. 27, 2023
Teyana Taylor, Anna Camp, and More of the Bestest Party Pics This Week Parties with Gucci, Sundance, and more.
gone sale-ing Jan. 27, 2023
10 Things You Don’t Have to Pay Full Price for This Week Deals from Dyson, Nordstrom, Shopbop, and more.
friday sales Jan. 27, 2023
19 Things on Sale You’ll Actually Want to Buy: From Lunya to Areaware Including fuzzy Birkenstock clogs, a teensy Cricut heat press, and our favorite weekender bag from Patagonia.
recommendations Jan. 27, 2023
20 Best Butt Plugs You Can Buy Online According to experts.
q&a Jan. 27, 2023
Saint Omer’s Guslagie Malanda Is No Longer an Actress in Secret How the Saint Omer actress went from art curator to awards-season hopeful.
the wedding files Jan. 27, 2023
A Twice-Rescheduled Midweek Wedding in the Hudson Valley “We’re not really ‘farm wedding’ people, so that limited our options.”
By Kaitlin Menza
keeping up with the royals Jan. 27, 2023
Has Prince Andrew’s Teddy-Bear Collection Been Confiscated? His Buckingham Palace apartment has reportedly been revoked, and with it, his dozens of stuffed toys.
bellissimo Jan. 27, 2023
Where Have I Seen Michael Imperioli’s Home Before? It’s unclear where The White Lotus ends and Imperioli’s apartment décor begins.
couture spring 2023 Jan. 27, 2023
At Valentino, Couture for Today Designers often look to the past for couture inspiration, but Pierpaolo Piccioli of Valentino believes it is only relevant if it talks to the moment.
By Cathy Horyn
valentine's day Jan. 27, 2023
13 Flower Alternatives to Shop for Valentine’s Day Options that will last longer than a week.
culture Jan. 27, 2023
Pamela Anderson Found Pam & Tommy ‘Crushing’ The actress called the Hulu series “salt on the wound.”
extremely online Jan. 27, 2023
I Can’t Shut Up About the M&M’s Drama Revisiting Tucker Carlson’s one-man campaign against the “spokescandies.”
valentine's day Jan. 27, 2023
16 Beauty Products My Boyfriend Won’t Stop Stealing From Me They double as great Valentine’s Day gifts, too.
More Stories