When a ritzy celebrity gets married — Ivanka Trump, say, or Lauren Bush — and the photos don’t surface within a few weeks, you always know: Vogue got the exclusive and will publish a pretty spread of the bride and all her trappings sometime in the coming months. Vogue also loves to profile weddings of those on their own masthead, which is a convenient by-product of hiring well-to-do, beautiful women from fancy families (see: Plum Sykes, Lauren Santo Domingo, Claiborne Swanson Frank, and Marina Rust). Now Vogue has assembled their bridal coverage into a new book, titled Vogue Weddings: Brides, Dresses, Designers, which is full of lovely pictures of weddings that cost more than the average American home.

In addition to bridal gowns photographed for editorials (Sarah Jessica Parker in Dolce & Gabbana, Maggie Rizer in Oscar de la Renta for Pierre Balmain haute couture), the book features vintage images from as far back as the early twentieth century, including shots of a young Princess Elizabeth (now Queen Elizabeth II) and the duke and duchess of Windsor. Other highlights: a photo of Karl Lagerfeld and Naomi Campbell at Kristen McMenamy’s 1997 wedding, and a picture of Oscar de la Renta driving a golf cart. See a preview of the book in our slideshow.

Maid of honor Lady Melissa Wyndham-Quin at her sister’s wedding. 1957. 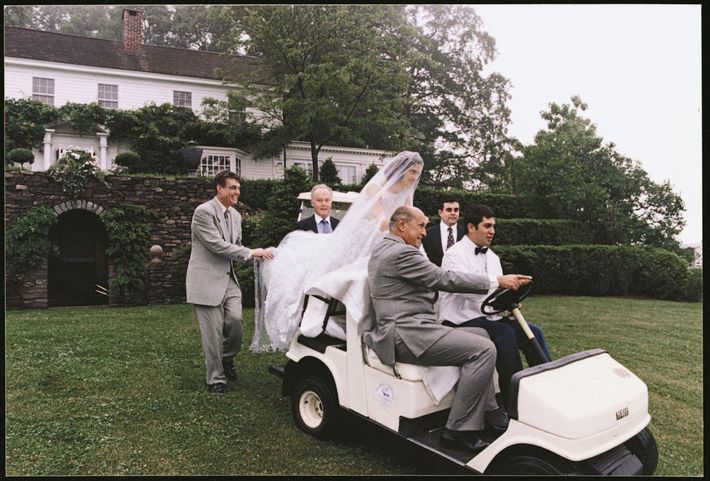 tv 6:23 p.m.
Here’s Sebastian Stan on Filming With an Animatronic Penis The actor had a one-of-a-kind experience filming Pam & Tommy.
valentine's day 3:11 p.m.
58 Gifts for the Person You Love They deserve the world, but these picks will work too.
celebrity 1:59 p.m.
Finally, Something Bono and I Can Agree On He is apparently embarrassed by “most” of U2’s music.
news 1:56 p.m.
Cardi B Offers to Pay Funeral Costs for Bronx Fire Victims Last week’s apartment fire left 17 people dead and over 60 injured.
self 1:15 p.m.
I’m Tired of Explaining Why I Don’t Drink We have to expand our language beyond “sober.”
By Sarah Wood
remembrances 12:39 p.m.
The Fashion World Remembers André Leon Talley Designers, writers, and celebrities paid tribute to the inimitable fashion icon, who died on Tuesday at 73.
vampires 12:08 p.m.
Megan Fox’s Engagement Ring … Bites? “The bands are actually thorns. So if she tries to take it off, it hurts.”
celebrity 11:03 a.m.
Tracing the Ongoing Feud Between Britney and Jamie Lynn Spears Things spiraled out after Jamie Lynn went on Good Morning America to promote her new book.
style 9:35 a.m.
Anna Wintour Remembers André Leon Talley The Vogue editor mourned her friend and former colleague, calling him “a brilliant and compassionate man.”
in memoriam 8:33 a.m.
André Leon Talley Has Died The former Vogue creative director and editor passed away unexpectedly this week at the age of 73.
culture Yesterday at 8:10 p.m.
There Really Is a Coordinated Online Attack on Meghan Markle A new analysis found that the Duke and Duchess of Sussex were the targets of a strategic, monetized social media campaign against them.
euphoria Yesterday at 6:31 p.m.
8 Pieces You Can Shop From Episode 2 of Euphoria By Kim Shui, Réalisation Par, Nodaleto, and more.
fashion Yesterday at 6:24 p.m.
All Signs Point to a Big Year Ahead for Aimé Leon Dore The cult menswear brand has a New Balance collection in the works and LVMH money in its pocket.
engagements Yesterday at 6:13 p.m.
What Is Machine Gun Kelly Hiding? The story of his proposal to Megan Fox isn’t adding up.
the grammys Yesterday at 4:56 p.m.
The Grammys Are Back On The awards show has been pushed to April — and will now take place in Las Vegas.
health Yesterday at 4:45 p.m.
Everything to Know About Rapid At-Home COVID-19 Tests Americans are finally eligible to receive free rapid tests.
power Yesterday at 2:09 p.m.
The New York Post Gets Its Own Tabloid Scandal A former top editor sues, saying the paper’s notorious former boss was welcomed back after sexually harassing her.
By Shawn McCreesh and Angelina Chapin
movies Yesterday at 2:00 p.m.
Daniel Radcliffe, We Are Ready for Your Music Career The actor will be portraying Weird Al in an upcoming biopic.
the bigger picture Yesterday at 1:34 p.m.
Wrestling Has a Dark Side. But for Some, It’s a Safe Space. Photographer Sofie Vasquez spent a year traveling the country, documenting the indie-wrestling scene.
By Bindu Bansinath
keeping up with the royals Yesterday at 1:29 p.m.
Uh, Prince Andrew Has a Teddy Bear Collection? A new documentary claims he yelled at staff who didn’t arrange his stuffed animals to his liking.
More Stories