This week marks the end of Kristen Stewart’s red-carpet run as Bella Swan. In the four years Stewart’s spent promoting the Twilight Saga, she’s stuck with a pretty specific look: leggy, slim-fitting, and mostly Balenciaga. The girl knows her strengths, and short little numbers and leg-baring slits suit her well. With the exciting year she’s had and the masses of Twihards preparing for their last hurrah, the actress is going to have more attention on her than ever in this last stretch of red carpets, right at a time when Balenciaga has bid farewell to its designer. So, with that in the mind, we took the liberty (pun intended) of suggesting some looks from the spring 2013 runways that would be a refreshing departure. As you click through, imagine sneakers with each one. 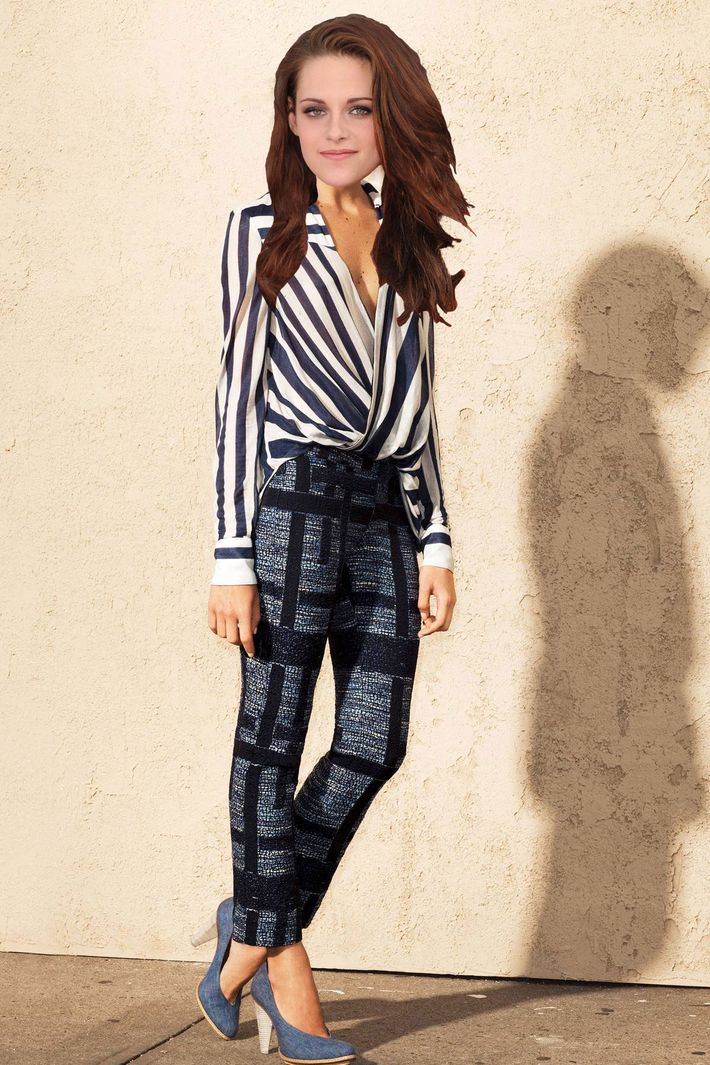 This printed pants are on-trend but still have the laid-back look KStew is known for. She’s already worn similar ones by Balenciaga.

Feminine, sophisticated, and a silhouette Stewart hasn’t worn before. It’s romantic without being over the top. And sneakers might actually work. 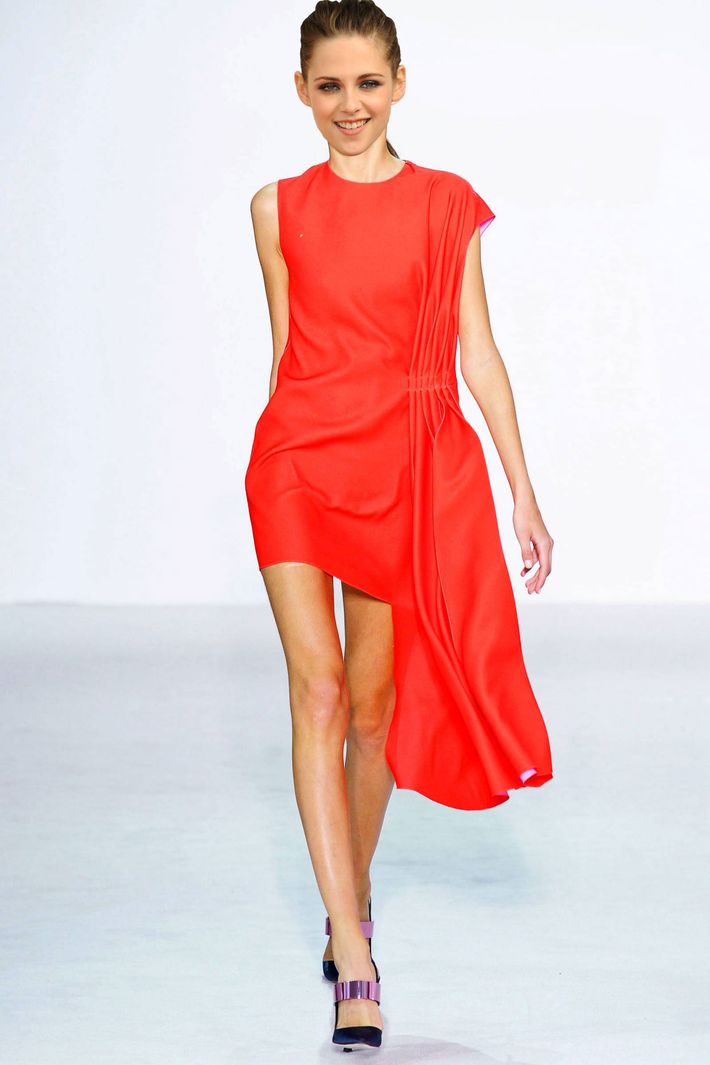 She now has the power to get her hands on spring 2013 Dior, and she should. This bright number is sleek and dramatic and would look fantastic on her gamine legs. 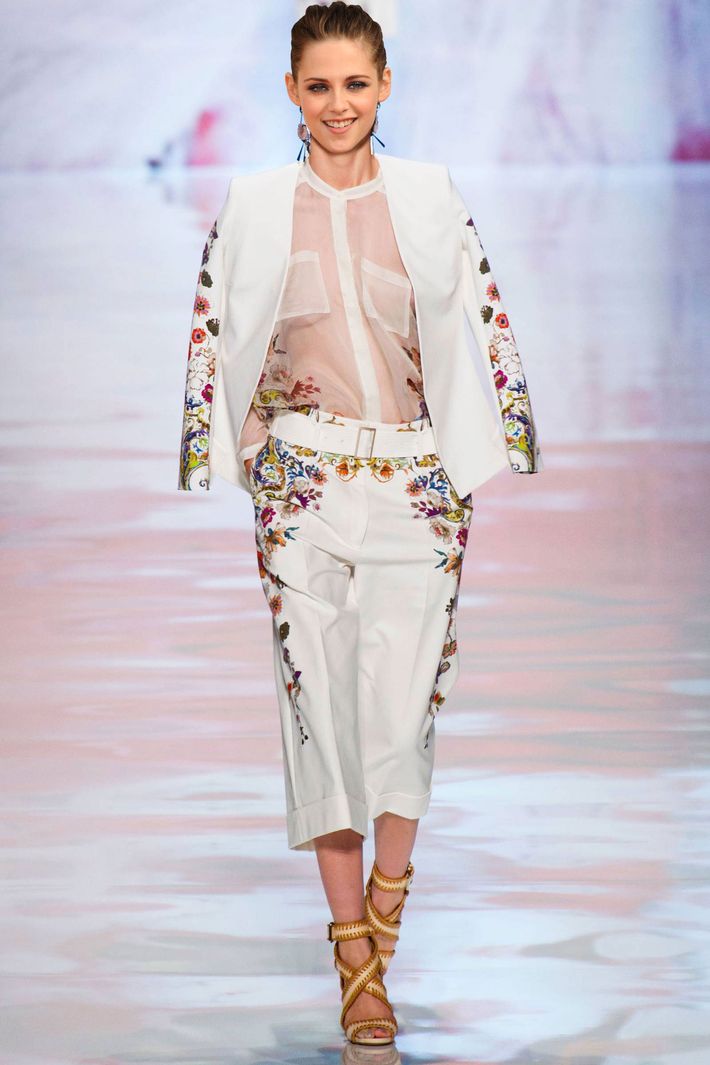 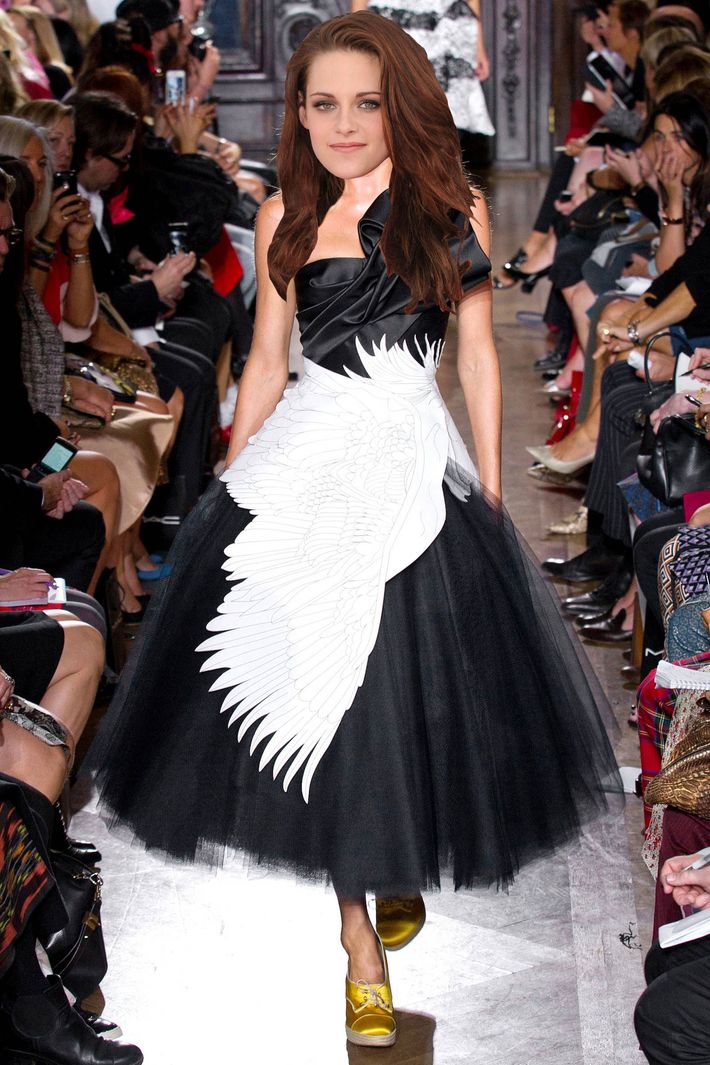 This look is bold and definitely a very fashion choice. But it’s already styled with sneakers, so it’s totally in KStew’s comfort zone. 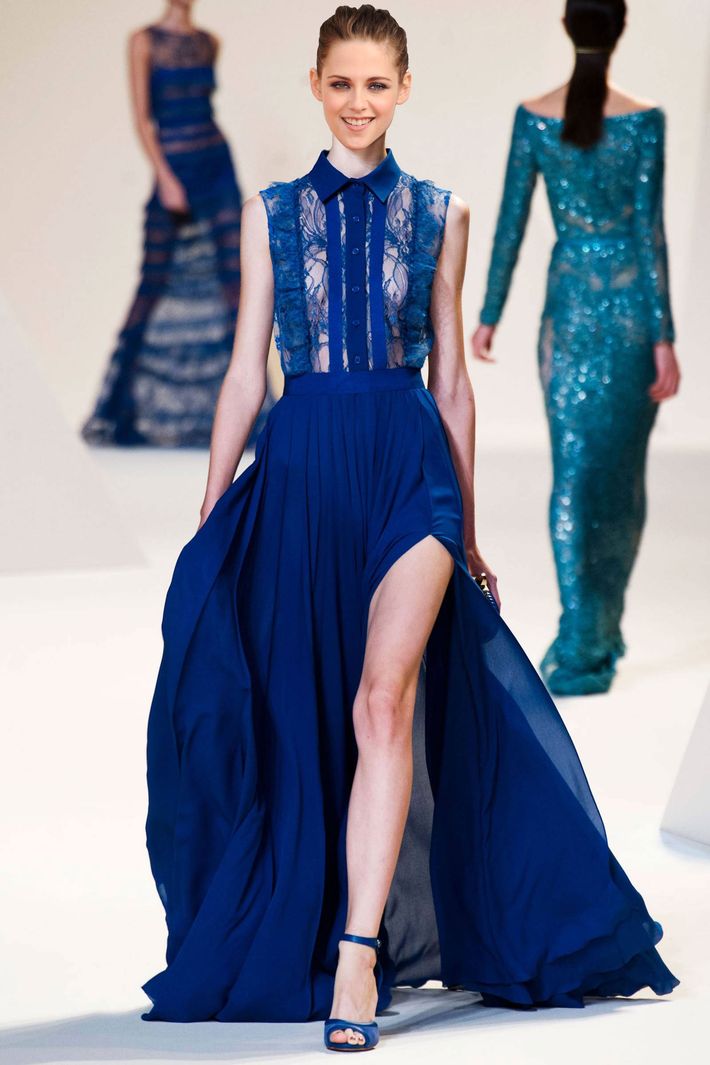 Here’s a gown that is all about color. The cobalt hue keeps the sophisticated look feeling younger. Mixed with the ladylike top and big slit, it creates a bold look that still highlights the features she loves to dipsplay. 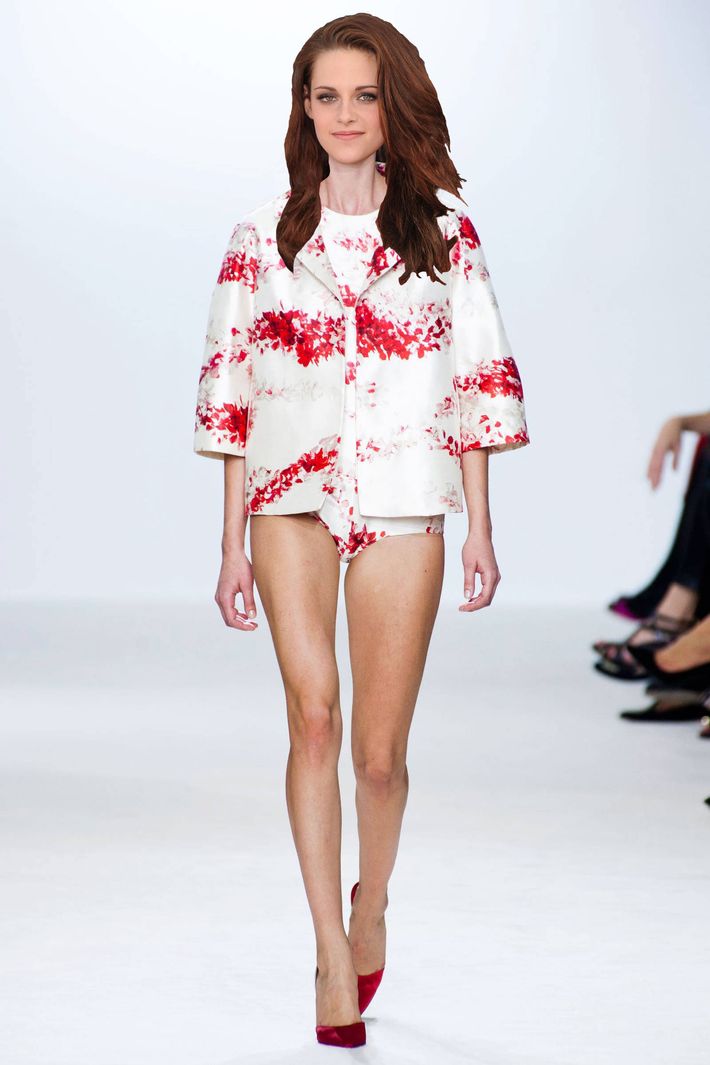 If you’ve got the legs, you might as well. 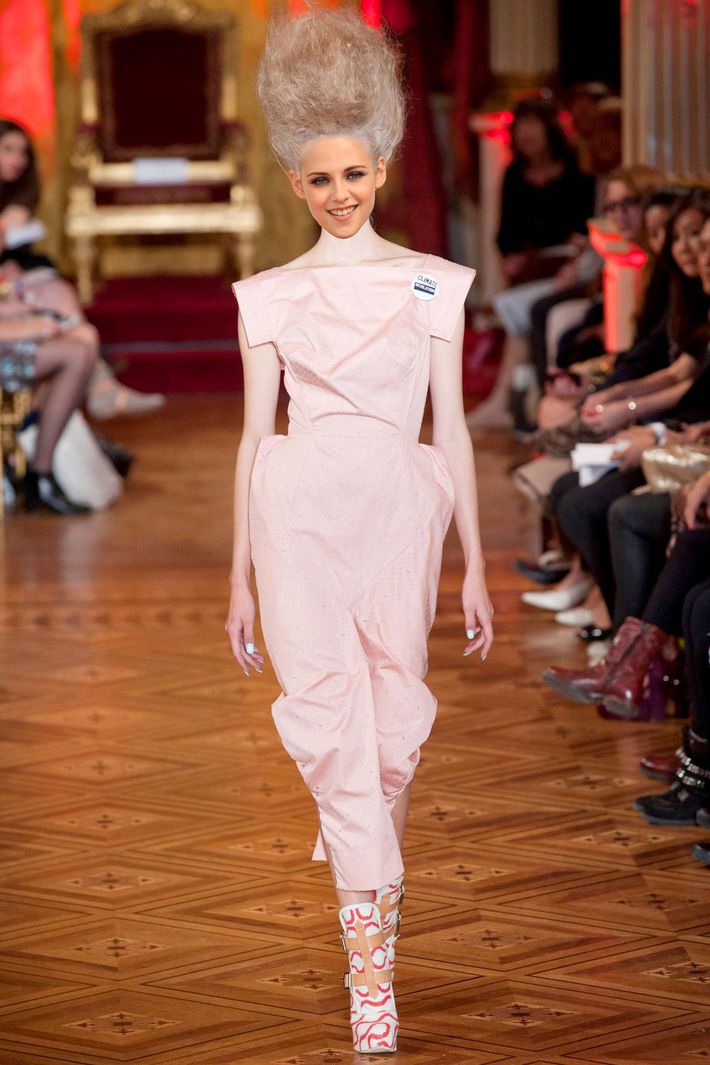 This covers new territory with the architectural structure of the dress, but is still appropriately vampirey for the actress. We’re obviously encouraging the runway hair, too.

She’s got just enough cheek to wear something with such daring cutouts. Plus, what a fabulous way to nod to her scandal. 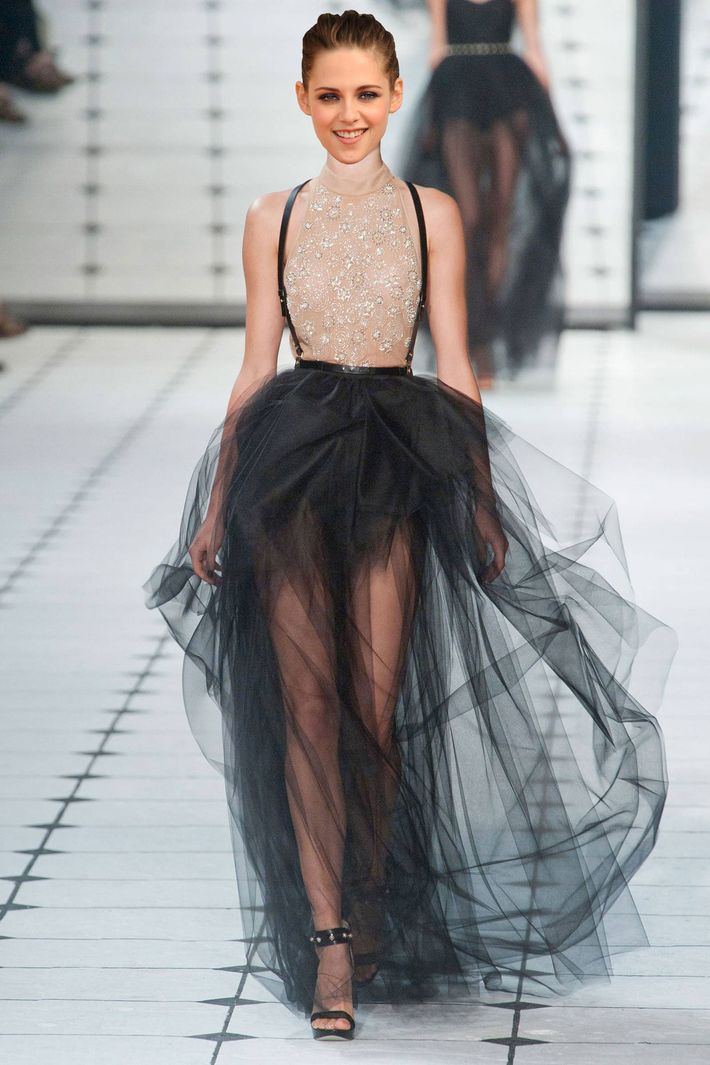 This is froof with an edge. We’ve got sparkles, a leather harness, and lots of leg: Cinderella meets Fifty Shades for the win.

What KStew Should Wear to the Twilight Premieres