One of the Cut’s Ten Models to Watch for Spring 2013, Magdalena Jasek booked a total of 23 shows, including Marc Jacobs, Alexander McQueen, Balenciaga, Louis Vuitton, Kenzo, Saint Laurent, and the opening slot at Celine. And if her spring/summer and pre-fall work (that Vuitton ad, Calvin Klein, Creatures of Comfort) is any indication of what’s next for the Marilyn girl, we should be seeing her around in September — especially now that she’s done with school. The 19-year-old, who started on the runway five years ago, split her time between modeling and her studies until last season, and plans to go to college sooner than later. Magda recently stopped by our offices to talk about growing up in Warsaw, breaking into the industry at a young age, and her thoughts on being a redhead.

Tell me about your childhood.
I’m from Warsaw, Poland. We don’t live in the center — we live more in the countryside, which I really liked because I don’t feel like I am living in the city. My mom is a teacher and my dad is also a teacher in a college, but does different stuff, with computers and informatics. Sometimes he tries to show me and explain, but I’m like, Dad, I don’t understand, sorry! And I have a sister, she’s 15, and a brother, he’s 7. Growing up, I was into books, spending time with family.

Is your sister interested in modeling at all?
I don’t think so. We don’t look similar at all. I’m the only redhead in my family.

What is it like to be a redheaded model?
In modeling, actually, it’s good because the competition is smaller, but when I was younger, I hated it. I had glasses, so you can imagine — a redheaded child, freckles, glasses. I wasn’t as skinny as I am now, so I hated that a lot. People teased me at school. But it’s fine now! Now I’m happy I have red hair.

What would you say if someone asked you to dye your hair?
No. A designer already tried to cut it [shoulder-length] and I also said no. I think my self-confidence is important, and I wouldn’t feel comfortable with short hair.

So, tell me how you were discovered.
I was 14. I sent in my pictures to a Polish magazine, because I thought, I want to see myself on the cover of a magazine. And there was no answer. After a few months, I sent in exactly the same pictures to the same magazine, and then they answered me, like, Let’s go for a shooting, let’s do something. And after the shoot, the photographer had connections with an agency, and he sent in my pictures, and they got back to me and I signed a contract. Maybe a month later, somebody stopped me in the supermarket asking, “Do you want to be a model?” So, if I wouldn’t have done it myself, it would have happened that way.

Do you think 14 is too young to start modeling?
It was young, but for the first two years it was just fun. My mother agent and my parents kept saying, “School is the important thing, modeling is just fun.” And that’s why I was doing Paris only, because I was in school and always, during Fashion Week, I had my final exams … But [to be a full-time model at] 14, I think it’s too much. I came to New York when I was 15 or 16, and I didn’t do a lot because I didn’t have a working visa, but I also didn’t feel ready. I was missing home so much and my English wasn’t that good, so it was hard to communicate sometimes. Now I feel ready. And the girls who start young, they act like Wow, look at me! because everybody is making stars of them and they are too young to understand that they shouldn’t act like that.

You walked in a lot of shows last season. What was it like to open Celine?
It was a surprise. I went there, and I was late from the Kenzo show. And I got there, and I just did a quick rehearsal after I got through the makeup and hair, and they were like, Magdalena, you’re first. I was like, Oh my God! But it was in flats, so it wasn’t that bad — thank God it was flats. They were so comfortable. And I met Phoebe Philo. She was so nice. That’s what I like about modeling. I can meet so many people.

You also did Marc Jacobs and Louis Vuitton.
Every year, I would watch Louis Vuitton, with all of those crazy themes, and I would think, Wow, it looks so amazing, I wish I could make the show, so I was really happy that I could do Louis Vuitton. It wasn’t just straight runway — it was something else. I loved the twins idea. I told the girl, “Okay, let’s start with the right leg, so we’ll start with the same one.” And that’s it, we just rehearsed once. I think the worst is the day before, when there’s a special rehearsal. Like, one year ago, I did the show with the elevators. I only did the rehearsal, but, I think, seven times. I didn’t do the show. They bring in different girls for the rehearsal, so the girls the day of the show don’t have to practice as many times.

What’s your dream gig?
Marc Jacobs was my dream one, and it came true! But, of course, American Vogue would be nice. My friends keep asking me, “So when can we see you on the cover of Vogue?”

And if you could meet one person, dead or alive, who would it be?
My great-grandmother, because she was also a redhead, and when I was born, she hated herself because I was a redhead. She was like, Redheaded people are always unhappy. That’s what the old people thought. And before I became a model, she died. I wish she knew that, thanks to my hair, I am a model.

How long do you think you will model for?
I don’t know. For now, I said I am taking gap year, and then going to college. But if it goes well, maybe I will think about one more year of modeling. I will just see — like each year, I will see. Because I know some girls who are already like 28 and still haven’t gone to college, and keep modeling, and I think that’s too much for me. But one year, two years, I think is okay, so I guess something like that. 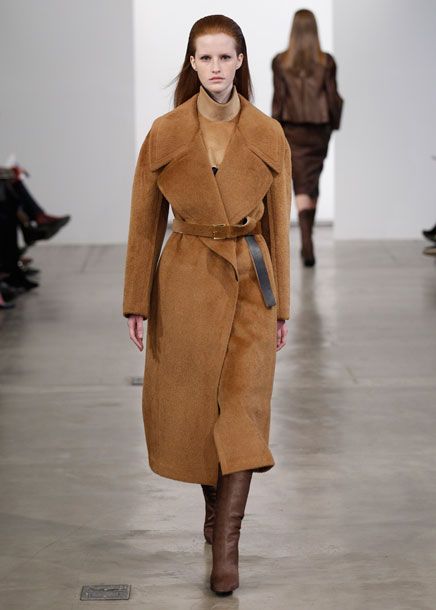 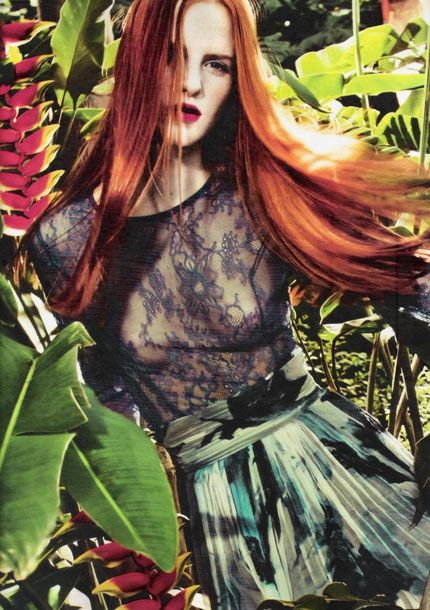 In a Brazilian Vogue editorial, March 2012. Photographed by Jacques Dequeker. 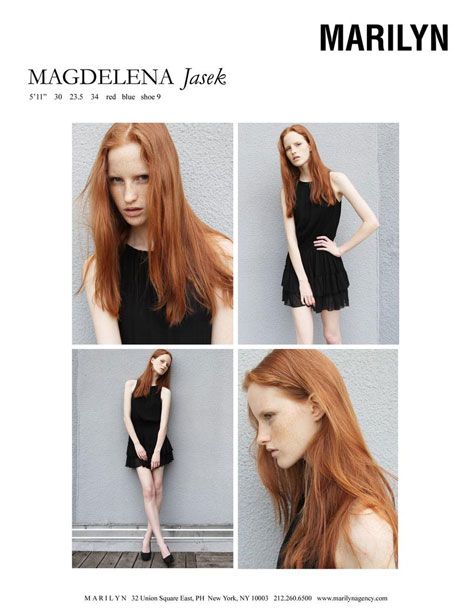 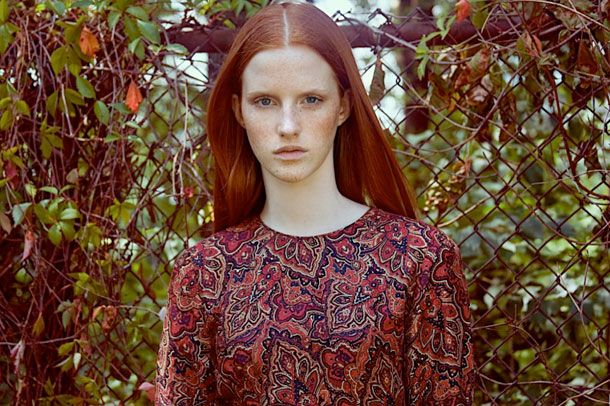 ask a beauty editor 3:43 p.m.
Will I Ruin My Salon Bond-Repair Treatment if I Don’t Use the At-home Products? You can’t inactivate one hair product by using another. But knowing how bond-builders work will prevent you from spending unnecessary money.
always shopping 3:37 p.m.
Nordstrom Is Highlighting These Black-Owned Brands Black/style@Nordstom will feature more than 50 brands.
q&a 3:23 p.m.
There’s a Wait List for Beyoncé’s Renaissance Hat, Too The biggest thing to happen to handmade accessories since Bernie Sanders’s gloves.
huh? 3:05 p.m.
Esther Perel Was Armie Hammer’s Marriage Counselor? Elizabeth Chambers says the former couple saw the relationship specialist for years.
going out? 12:24 p.m.
Is This King Charles’s Getting-Ready Playlist? Selections include Michael Bublé and “Daddy Cool.”
why is your skin so good 12:15 p.m.
How This OG YouTuber Gets Her Skin So Good Deepica Mutyala on being tokenized in the beauty industry and creating a community for brown girls like herself.
style 12:03 p.m.
The Toddlers in the $600 High-Tops Luxury brands target kids, and the parents are buying.
By Matthew Schneier
celebrity 12:02 p.m.
No, Adam Levine Is Not Going on Call Her Daddy Though the suggestion that he might be prompted an interesting reaction from his wife.
always shopping 11:20 a.m.
16 Wool Coats Under $400 Because it’s getting cold out there.
keeping up with the royals 9:48 a.m.
Will Harry and Meghan Get to Go to the Coronation? Sources suspect they’ll be invited; whether or not they accept is another question.
love and war 9:00 a.m.
Can “Niche” Dating Apps Save Us? Services like Grindr, Feeld, and Muzz offer frustrated daters an alternative to Tinder and Bumble. But are they any better?
By Sangeeta Singh-Kurtz and Lakshmi Rengarajan
"wellness" Yesterday at 9:11 p.m.
Of Course Aaron Rodgers Is Going on a ‘Darkness Retreat’ It’s all part of his “era of contemplation.”
yikes Yesterday at 7:50 p.m.
Ashton Kutcher Purposely Chose To Pose Like That The awkward photos of Kutcher and Reese Witherspoon were all by design, apparently.
oscars Yesterday at 6:46 p.m.
Gina Prince-Bythewood Weighs In on the Best Actress Debate The Woman King director called out the lack of Oscar nominations for Black women.
teens Yesterday at 3:06 p.m.
Leonardo DiCaprio Is Not Currently Dating a Teen Why would you think that??
goodbyes Yesterday at 12:30 p.m.
RIP, Stripper Web For 20 years, the forum was a haven for new dancers seeking community.
ask a boss Yesterday at 12:00 p.m.
How to Answer ‘Why Are You Interested in This Position?’ in a Job Interview This is usually one of the first questions asked in an interview, and you shouldn’t wing your answer.
auto-refill Yesterday at 11:58 a.m.
The Beauty Products Beyoncé’s Makeup Artist Sir John Uses to the Last Drop Including Barbara Sturm’s Lifting Serum, Supergoop’s Unseen Sunscreen, and SkinMedica’s TNS Serum.
grammys 2023 Yesterday at 11:21 a.m.
Jay-Z Thinks Beyoncé Deserved Album of the Year Too In a TIDAL interview, he said that Renaissance “has inspired the world.”
action item Yesterday at 10:35 a.m.
How to Help the People of Turkey and Syria Two powerful earthquakes have killed more than 5,200 people.
More Stories