The Saks annual “Day After Christmas Sale” is not for the weak: Not only are there enormous crowd and long lines, but there’s also a generous amount of aggression. Starting at 8 a.m., all items are 50 percent off the lowest price until noon, causing a panicked dash once doors open. In an attempt to stave off last year’s terrifying mob scene, barriers were set up outside to ensure orderly lines at both entrances. By 7:30 a.m., the line had wrapped around the corner and twenty minutes later, it was almost down the block. Behind us, two women plotted their shopping strategy (seeking: a Burberry children’s snowsuit), while stamping their feet in an attempt to keep warm in the 29-degree temps. It felt a bit like New Year’s Eve, constantly checking on the time, but waiting for the clock to strike eight, not midnight. Once it did, the line began moving briskly as security begged excited shoppers not to run in the store. 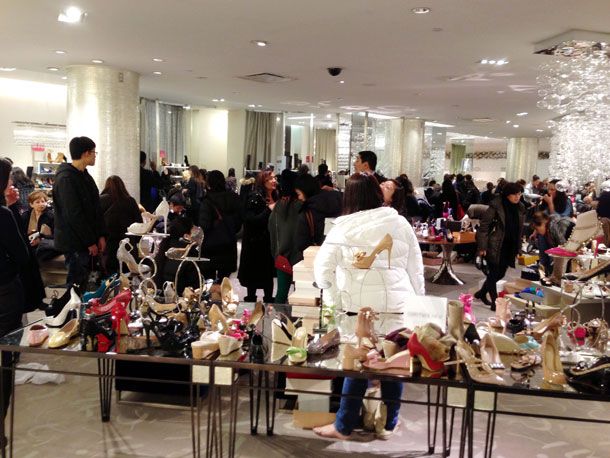 Like any other sample sale, shoes and bags were the first to go. Security was quick to direct customers to the elevator banks, claiming it was the most efficient way up to the shoe floor so big, it has its own zip code. Seasoned shoppers dodged the crowds that gathered around the marked-down handbags, near the elevator banks, opting to take the escalators to avoid the growing crowds. Ladies, don’t bother with the handbags, they’re never the ones you want and they’re gone within the first five minutes. A quick dash up seven sets of escalators, and security had decided to thwart impatient shoppers by directing them off on the seventh floor and instructing them to wait for the elevator to head up to eight. It didn’t work. And soon groups of women made a stampede toward already crowded elevators. As women shoved themselves into corner crevices, harried elevator security began to yell, “If we can’t close the doors, you can’t go upstairs!” As the scene became more chaotic, that eighth-floor escalator opened back up. 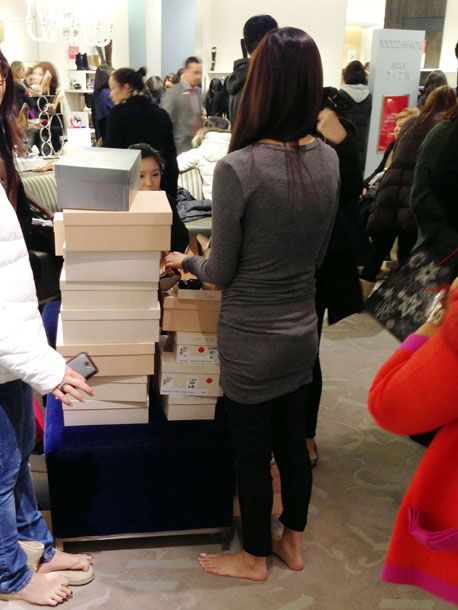 Upon arriving to the shoe floor, the scene was already chaotic at 8:15 a.m. With abundant styles from Nicholas Kirkwood, Prada, Miu Miu, Giuseppe Zanotti, and Stella McCartney, the selection was impressive as always. While shoes were arranged by size in the beginning, women were grabbing what they could be 8:45 a.m. Hoarding was rampant and having a buddy was advisable: one to guard the pile while the other strolled around snapping up half-pairs. One relatively calm security guard informed us that he was hired especially for today, “I’m just added security, in case you ladies decide to fight.” He also told us there were about 100 staffers on the floor, though finding a sales associate proved to be nearly impossible. Some were assigned to work until 8:45 p.m., testing the patience of any shoe-loving lady. 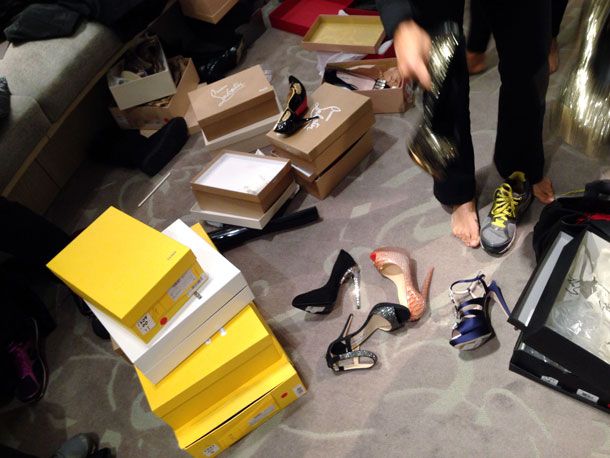 Is all of the madness worth it? Well, one of us happens to be wearing these Miu Miu booties at her desk right now and will probably face the crowd again next year. It’s no civilized Manolo Blahnik sale, but if you’re looking for a fancy fantasy shoe for your New Year’s Eve plans, Saks is just the place to be. Just remember to be patient, smile at your poor sales associate, and realize that all exits from the floor are final. Oh, and please don’t bring your dog. Or feed it from a metal bowl in the middle of the sales floor — lady, we’re looking at you.

5 questions with... 3:27 p.m.
Gugu Mbatha-Raw Takes on the Neo-Noir In Surface, she plays an amnesiac trying to uncover her truth.
wtf 2:42 p.m.
Watch Kathy Hilton Learn Lizzo Is Not Gabourey Sidibe It’s as cringe as it sounds.
panties we love 1:00 p.m.
Kim Kardashian on How She Made Her Skims Underwear A deep dive with Kardashian on what makes Skims panties so special. (Hint: It’s the fit.)
underneath your clothes 1:00 p.m.
The Best Backless Bras for Every Cup Size From plunging necklines to nipple covers and boob tape, there’s one for every outfit.
By Leora Herman
millie bobby brown 12:38 p.m.
Millie Bobby Brown Opens Up About ‘Unhealthy’ Relationship With Hunter Echo She says she felt “out of control and powerless” after the TikTok star claimed to have groomed her as a minor.
obsessive tester 11:06 a.m.
The Absolute Best Mascaras of All Time For every budget and need.
parenting 11:00 a.m.
My Queer Family vs. the Supreme Court If SCOTUS comes for marriage equality next, will I still be considered my son’s mother?
By Michelle Tea
allegations 10:21 a.m.
Unpacking the Allegations Against Ezra Miller Vermont police are unable to locate a woman and her three children who were living at Miller’s farm earlier this summer.
ugh why 9:46 a.m.
Kevin Federline Continues to Attack Britney Spears’s Parenting After Spears called his claims “hurtful,” her ex-husband posted footage of the pop star arguing with her sons four years ago.
celebrity 8:47 a.m.
Olivia Wilde Didn’t Appreciate Being Served Custody Docs Onstage In new court docs, she said ex Jason Sudeikis “clearly intended to threaten me.”
my two cents 8:00 a.m.
‘I’m Good at Saving, But I’m Still Miserable’ Not to oversimplify matters, but what if you thought about money less?
By Charlotte Cowles
accidents Yesterday at 7:30 p.m.
Anne Heche in a Coma, Under DUI Investigation, Following Car Crash According to a representative, she has remained in a coma since shortly after the accident.
style Yesterday at 5:50 p.m.
5 New York City Dance Companies, Brought Together The shows, which continue through Saturday, are free and open to the public.
power Yesterday at 4:02 p.m.
Did Armie Hammer Really Think Voice Notes Were a Good Idea? In the trailer for House of Hammer, the actor shares a violent sexual fantasy in a voice note played by one of his exes.
recommendations Yesterday at 3:00 p.m.
18 Best Butt Plugs You Can Buy Online According to experts.
okay?? Yesterday at 2:41 p.m.
Oscar Isaac Is Still Struggling to Explain That Red-Carpet PDA Apparently he and Jessica Chastain are … like flatworms?
love and war Yesterday at 2:03 p.m.
Tinder’s Fatphobia Problem The dating app’s hold on the culture began around the same time as the mainstream body-positive movement. So why hasn’t anything changed?
By Kelsey Miller
do i need this? Yesterday at 2:03 p.m.
Do I Need a One-of-a-Kind Piece From Éliou’s New Clothing Line? The collection will pair nicely with the beaded necklaces beloved by Harry Styles.
intimacy coordinators Yesterday at 1:17 p.m.
Amanda Seyfried Reflects on Feeling Pressured Into Nude Scenes “I didn’t want to upset anybody, and I wanted to keep my job.”
??? Yesterday at 12:12 p.m.
Prince William Apparently Has Another Sexy Nickname In addition to the “Prince of Pegging,” of course.
More Stories