Hillary Clinton is more popular than ever — but her name isn’t. In 1992, when Bill Clinton first entered office, Hillary and its variations plummeted in popularity. The name had been poisoned; mothers abandoned it at record speed. Statistician Hilary Parker examines the anti-Hillary trend.

I’ve always had a special fondness for my name, which — according to Ryan Gosling in Lars and the Real Girl — is the case for most people. Plus, the root word for Hilary is the Latin word “hilarius” meaning cheerful and merry, which is the same root word for “hilarious” and “exhilarating.” It’s a great name.

Several years ago I came across this blog post, which provides a cursory analysis for why Hillary is the most poisoned name of all time. The author is careful not to comment on the details of why Hillary may have been poisoned right around 1992, but I’ll go ahead and make the bold causal conclusion that it’s because that was the year that Bill Clinton was elected, and thus the year Hillary Clinton entered the public sphere and was generally reviled for not wanting to bake cookies or something like that. Note that this all happened when I was 7 years old, so I spent the formative years of 7 through 15 being called “Hillary Clinton” whenever I introduced myself. Luckily, I was a feisty feminist from a young age and rejoiced in the comparison. (Life is, after all, not about being popular.)

In the original post, the author bemoans the lack of research assistants to perform his data extraction for a more complete analysis. Fortunately, in this era we have replaced human jobs with computers, and the data can be easily extracted using computer programming. This weekend I took the opportunity to learn how to scrape the Social Security data myself and do a more complete analysis of all of the names on record. I was able to collect the 1,000 most popular baby names for every year from 1880 to 2011 from the Social Security website. For each of the 1,000 names in a given year, I collected the raw number of babies given that name, the percentage of babies given that name, and the rank of that name. For girls, this resulted in 4,110 total names.

In the original analysis, the author looked at the changed rank of Hillary. The ranks are interesting, but we have more finely tuned data than that available from the SSA. The raw numbers of babies named a certain name are likewise interesting, but do not normalize for the population. Thus the percentage of babies named a certain name is the best measurement.

Looking at the absolute change in percentages is interesting, but would not tell the full story. A change of, say, 15 percent to 14 percent would be quite different and less drastic than a change from 2 percent to 1 percent, but the absolute change in percentage would measure those two things equally. Thus, I need a measure of the relative change in the percentages — that is, the percent change in percentages (confusing, I know). Fortunately the public health field has dealt with this problem for a long time, and has a measurement called the relative risk, where “risk” refers to the proportion of babies given a certain name. For example, let’s say the percentage of babies named Jane is one percent of the population in 1990, and 1.2 percent of the population in 1991. The relative risk of being named Jane in 1991 versus 1990 is 1.2 (that is, it’s (1.2/1)=1.2 times as probable, or (1.2-1)*100=20 percent more likely). In this case, however, I’m interested in instances where the percentage of children with a certain name decreases. The way to make the most sensible statistics in this case is to calculate the relative risk again, but in this case think of it as a decrease. That is, if Jane was at 1.5 percent in 1990 and 1.3 percent in 1991, then the relative risk of being named Jane in 1991 compared to 1990 is (1.3/1.5)=0.87. That is, it is (1-0.87)*100=13 percent less likely that a baby will be named Jane in 1991 compared to 1990. 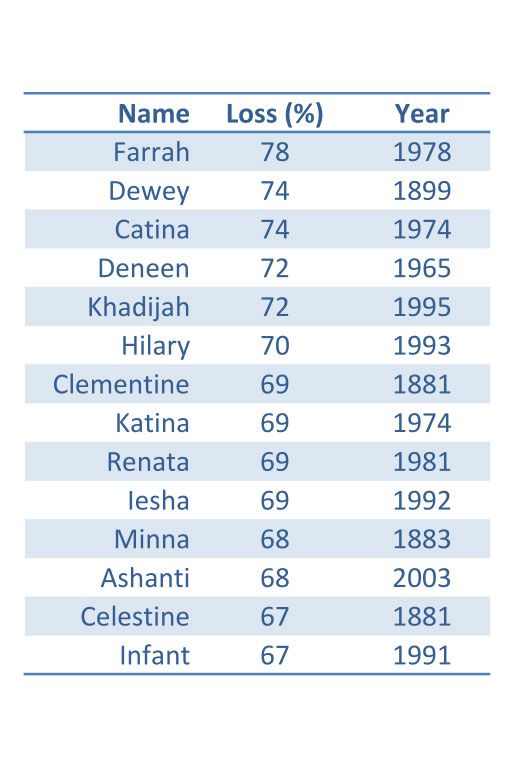 No. 6?? I’m sorry, but if I’m going to have one of the most rapidly poisoned names in U.S. history, it best be No. 1. I didn’t come here to make friends, I came here to win. Furthermore, the names on this list seemed … peculiar, to say the least. I decided to plot out the percentage of babies named each of the names to get a better idea of what was going on. (Click here to see the full-sized plot. Note that the y-axis is Percent, so 0.20 means 0.20 percent.) 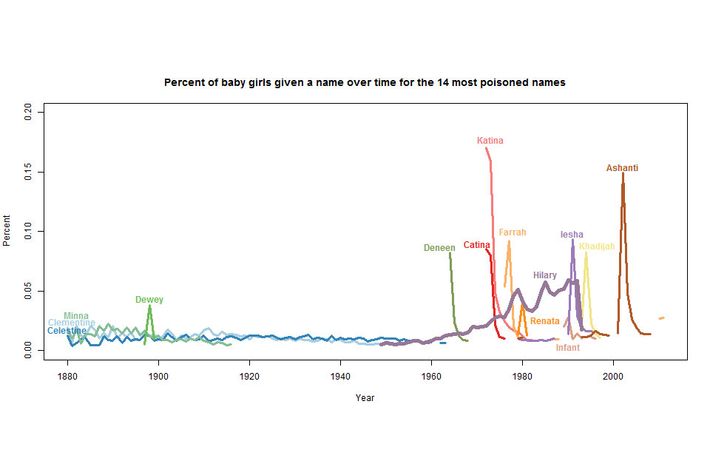 These plots looked quite curious to me. While the names had very steep drop-offs, they also had very steep drop-ins as well. The other, more peculiar names hadn’t been poisoned, the way Hilary had — rather, they were names that had experienced flash-in-the-pan popularity.

This is where this project got deliriously fun. For each of the names that “dropped in,” I did a little research on the name and the year. Dewey popped up in 1898 because of the Spanish-American War — people named their daughters after George Dewey. Deneen was one name of a duo with a one-hit wonder in 1968. Katina and Catina were wildly popular because in 1972, in the soap opera Where the Heart Is, a character is born named Katina. Farrah became popular in 1976 when Charlie’s Angels, starring Farrah Fawcett, debuted (notice that the name becomes popular in 2009 when Farrah Fawcett died). Renata was hard to pin down — perhaps it was popular because of this opera singer who seemed to be on TV a lot in the late seventies. Infant became a popular baby name in the late eighties for reasons that completely defy my comprehension and that are utterly un-Google-able. (Someone pointed out on Facebook that it’s possible this is due to a change in coding conventions for unnamed babies. This would make more sense, but would also make me sad.)

I think we all know why Iesha became popular in 1989:

Khadijah was a character played by Queen Latifah in Living Single, and Ashanti was popular because of Ashanti, of course.

Hilary, though, was clearly different than these flash-in-the-pan names. The name was growing in popularity (albeit not monotonically) for years. So to remove all of the fad names from the list, I chose only the names that were in the top 1,000 for over twenty years, and updated the graph (note that I changed the range on the y-axis). 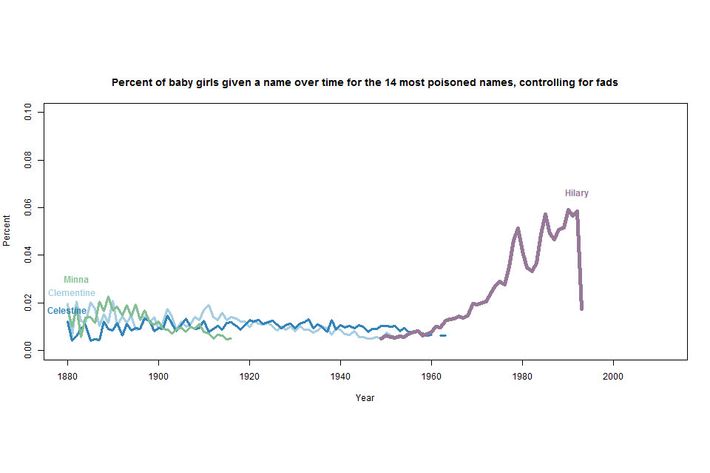 I think it’s pretty safe to say that, among the names that were once stable and then had a sudden drop, Hilary is clearly the most poisoned. I am not paying too much attention to the names that had sharp drops in the late 1800s because the population was so much smaller then, and thus it was easier to drop percentage points without a large drop in raw numbers. I also did a parallel analysis for boys, and aside from fluctuations in the late 1890s and early 1900s, the only name that comes close to this rate of poisoning is Nakia, which became popular because of a short-lived TV show in the seventies.

At this point, you’re probably wondering where Hillary (with two L’s) is. As it turns out, Hillary took two years to descend from the top, thus diluting out the relative risk for any one year (it’s highest single-year drop was 61 percent in 1994). If I examine slightly more names (now the top 39 most poisoned) and again filter for fad names, both Hilary and Hillary are on the plot, and clearly the most poisoned. 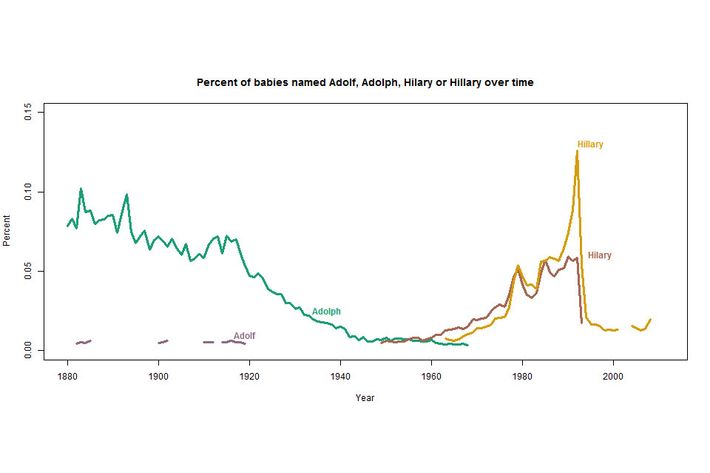 (The crazy line is for Marian and the spike is due to the fact that 1954 was a Catholic Marian year — if it weren’t an already popular name, it would have been filtered as a fad. And the Christin spike might very well be due to a computer glitch that truncated the name Christina! Amazing!!)

So, I can confidently say that, defining poisoning as the relative loss of popularity in a single year and controlling for fad names, Hilary is absolutely the most poisoned woman’s name in recorded history in the U.S.

(Personal aside: I will get sentimental for a moment, and mention that my mother was at Wellesley at the same time as Hillary Rodham. While she already knew that she wanted to name her future daughter Hilary at that point, when she saw Hillary speak at a student event, she thought, “THAT is what I want my daughter to be like.” Which was empirically the polar opposite of what the nation felt in 1992. But my mom was right and way ahead of her time.) 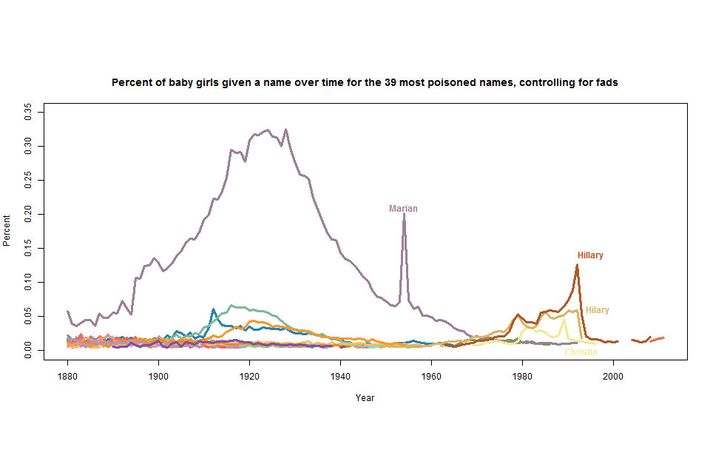 Code for this project is available on GitHub.

Hilary Parker is a fifth-year Ph.D. candidate in biostatistics at the Johns Hopkins Bloomberg School of Public Health. This post is modified from her blog, Not So Standard Deviations. Follow her on Twitter @hspter.

Hillary Clinton Finally Has Permission to Be a Bitch