Not to sound like an old man, but when I was in high school, pretending to have a girlfriend took some effort. You had to make up a name for her and choose a remote location for her hometown. (Because I grew up in the suburbs of Boston, most fake girlfriends hailed from New Hampshire.) Then you would generate a stream of believable excuses as to why your lady friend never visited. You couldn’t just build a fake Facebook or Twitter account. You actually had to go out there in the world and give yourself a hickey with a vacuum cleaner.

Nowadays, inventing a relationship is easy. In fact, when Notre Dame linebacker Manti Te’o sits down with Katie Couric this afternoon, he will argue that he did it by accident. During a football season that led him to a second place finish in Heisman Trophy voting, outlets ranging from the New York Times to ESPN reported that Te’o’s girlfriend Lennay Kekua died of leukemia. Kekua, however, turned out to be a hoax; she existed primarily as an online profile with a picture stolen from another Facebook account. Te’o claims that he, like the sports-watching public, believed Kekua was a real human and not a scam perpetrated by a cruel friend or malicious stranger. This type of ruse is known as “catfishing,” after filmmaker Nev Schulman’s 2010 documentary Catfish, detailing his own online romance gone awry.

The modern ease of catfishing has had the tangential effect of growing a cottage industry of websites offering the services of fake Internet girlfriends. Make an existing girlfriend jealous, they urge. Get your nagging family off your back. None market directly to those garnering sympathy during a Heisman campaign, nor to what I imagine must be a lucrative contingent of deeply closeted gay men. Almost all the sites guarantee discretion — and contain a disclaimer that you WILL NOT meet your fake online girlfriend for in-person sex stuff, no matter how nicely you ask.

To better understand the plight of Manti Te’o, I decided to blow some money on an imaginary paramour. Fake Internet relationships, it turns out, are a buyer’s market.

The Cadillac of fake Internet girlfriends comes from FakeInternetGirlfriend.com. With artsy portraits and a sleek gray-on-gray design, the website looks like the portfolio of a talented undergraduate photography major. For $250 a month, the fine folks at Fake Internet Girlfriend will generate social media profiles for your phantom female and help you create a backstory for your long-distance relationship. Your fake girlfriend will text you up to ten times a month and leave up to two telephone messages confirming dinner plans or just checking in. For an additional hundred clams, your F.I.G. can join your World of Warcraft or Everquest II campaign. The website does not list an e-mail address or a phone number. The interested (lonely) party simply fills out a form on the website, then waits for the administrators to contact him — a process not unlike waiting for a response when asking out a new acquaintance. When I e-mailed to inquire whether they’d consider lifting their three-month minimum on contracts to sample their services for journalistic purposes, I never heard back. Either they were insulted by my request, or they have no vested interest in customer service. I’m guessing few people are willing to call the Better Business Bureau to complain about a fake girlfriend supply center.

If Fake Internet Girlfriend is the luxury sedan of self-catfishing, then ImaginaryGirlfriend.com is a Toyota Camry. The site’s homepage resembles a low-cost dating service, something you might feel self-conscious browsing in a coffee shop. For $43, Imaginary Girlfriend provides two months of weekly, handwritten letters — for less than a dollar a day, you get to feel like the world’s most pathetic Civil War general! You also receive the benefit of getting to break up with your Imaginary Girlfriend, at which point she is contractually obligated to beg you to take her back. Shopping for a woman who looked like a good letter-writer, however, I noticed none of the profiles seemed to be active. The website had last been updated in 2005. Like a gas station sign reading “$2.15,” ImaginaryGirlfriend.com was too good to be true.

A little frantic in my search for a fake companion, I looked into the services of a Brazilian company that I’d heard offers girlfriend amenities. On the upside, the pricing system is right on the homepage like it was a rental car service. On the downside, the entire website is in Portuguese. Using my college minor in Spanish, I puzzled my way through the application process, but I never heard back from them, either. I assume a man named Gustavo is now in the process of stealing my identity/wallet/kidneys.

Wild with desperation, I posted on Craigslist offering $20 for the services of a fake girlfriend. The post was immediately flagged and removed for violating the site’s terms of service. I even started a Twitter account for a fake girlfriend from New Hampshire. I fired off a few decoy tweets — “I totes need a pumpkin latte today,” “Happy hour with my besties. Can’t. Wait.” — before tweeting, “@joshgondelman Uv got a great dick, chief.” So the account wouldn’t seem fake, I also made her follow Ke$ha and Fareed Zakaria.

Finally, I stumbled across GirlfriendHire.com, the public transit of fake girlfriends. On GirlfriendHire, tokens of romantic affection are available à la carte over PayPal. “I will text you and keep your phone buzzing! for $5,” volunteers one listing. “I will send you a picture of all my tattoos for $5,” promises another. It’s kind of like a sketchier Fiverr.com, which itself is a back-alley Task Rabbit.

With so many affordable fake females at my disposal, I went on a fake girlfriend shopping spree. I made it rain $5 PayPal orders, ignoring advice a friend’s dad once gave me after being hoodwinked by prostitutes in Flint, Michigan: “Never pay up front for a lady’s services.”

From one woman I requested a series of text messages reading:

They are keeping me in this computer against my will! I want to be real again, to touch and taste and skip and jump. I am being held here in this prison of ones and zeros. Help me PussyDoctor360! You’re my only hope!

Undeterred, I continued placing orders. I asked another woman to send a Facebook message stating that we had met, and I had seemed totally heterosexual.

These women were so unreliable. Were they even imaginary girlfriend material? Finally, one fake girlfriend followed through. Sunday morning, I received a message on my Facebook timeline from a lady who called herself Ivy Wood, a name that could belong to a transgender Bond girl.

The work of a true professional. Fake love is real!

Suddenly, I was knee-deep in fake girlfriends. An ostensible female who had offered to take a picture “in any pose I wanted” had replied to my request for a photo of her holding that day’s newspaper with a stock photo. Though I suspect she found the picture online, I appreciated that she included the requested caption, “I exist so hard.” 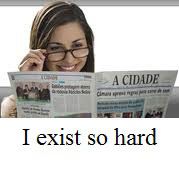 My greatest fake Internet girlfriend triumph came the following night. Several days prior, a fake girlfriend had offered to photograph herself wearing any outfit I wanted while holding a flirty sign. I had responded with an unusual set of instructions, and though it took her a few days to comply, she came through more faithfully than I could have imagined. I received, in my GirlfriendHire.com inbox, a photograph of a young woman wearing a football jersey and holding a sign that read, “I died of leukemia, but good luck with football!”

I marveled at the picture. What a catch! This girl was clearly down for whatever, a true “ride or die” chick, in the words of the rapper Eve. She was exactly the kind of person I’d want to be my actual girlfriend. And in that moment I understood — I related to Manti Te’o and his desire for something dubious and ephemeral to be real, to exist in flesh and blood. To want so badly to be loved, that you accept deception. To want to believe, in the words of The X-Files. I thought back to high school and felt retroactive sympathy for the kids who invented lovers and fabricated tales of trips to second base.

Then that feeling passed and I called my real-life girlfriend, and we laughed and laughed.

I Bought Three Fake Girlfriends on the Internet