The last week has been a curious one for Liberty Ross. On Friday, the Internet learned she posed nude for Love, providing quotes in the accompanying interview, like, “As a model you have to be so strong as a human being, feet on the fucking ground,” and “I think I am the only person who likes getting older! It felt like a relief when I turned 30.” Always so poised! The next day, Us Weekly reported Ross had finally filed for divorce from Twilight super-fan Rupert Sanders, asking for joint custody of their two children.

Keeping with her comeback plans, Liberty emerged from her Hollywood home on Tuesday wearing the perfect the-world’s-just-seen-my-boobs and post-divorce-filing outfit. The black jacket and pants sort of feel like a suit (she’s so serious right now), but the details — zippers, a tuxedo stripe — remind us she wouldn’t be caught dead at Ann Taylor. As for her bag, she’s hugging it under her arm, which we learned yesterday is a trend. Other accessories: mandatory sunglasses, her middle-finger ring, and is that a hair-tie on her thumb? 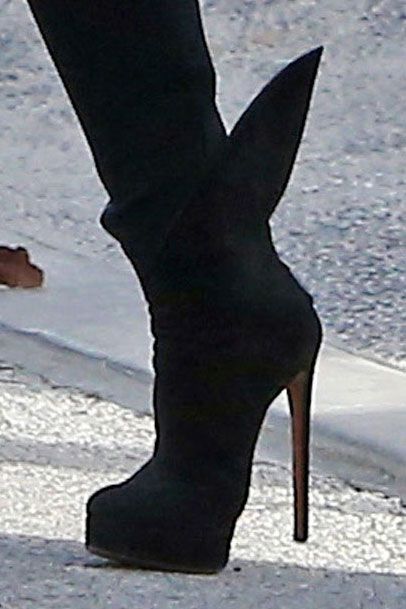 parties! 4:12 p.m.
The Bestest Party Looks of the Week Christopher Meloni in a paisley shirt. Need I say more?
recommended by experts 2:48 p.m.
What’s the Best Pillow for Side Sleepers? You might want to wake up for this, side sleepers.
By Jason Chen, Karen Iorio Adelson, and Ambar Pardilla
style 1:59 p.m.
A T-Shirt That Celebrates Black Queer Mothers With proceeds benefiting Planned Parenthood.
tokyo olympics 1:40 p.m.
Simone Biles Isn’t Sure If She’ll Compete Again in Tokyo Ahead of next week’s event finals, the gymnast says she’s still struggling with “the twisties.”
friday sales 1:26 p.m.
20 Things on Sale You’ll Actually Want to Buy: From Calvin Klein to Champion Including Billie Eilish on vinyl, some under-$20 hoops, and a chiropractor-recommended foam roller.
power 1:25 p.m.
Amanda Knox Calls Out Stillwater for Using Her Story “Why does my name refer to events I had no hand in?”
beauty interview 1:04 p.m.
Helen Mirren Has Swagger and She Wants That For You Too Talking to the actor and L’Oréal Paris spokesperson about what makes her feel most beautiful.
sports! 1:00 p.m.
The Best Things We’ve Seen at the Olympics So Far A swim coach horny for gold, teens shredding the skateboarding category, and more.
are u coming? 12:00 p.m.
12 Hours on the Hunt for Daddies in Fire Island An up-all-night trip to the Pines Party with no place to stay and an Instagay I barely knew.
mamma mia 11:25 a.m.
Today, We Are All Gucci The House of Gucci trailer is finally here.
closings 9:34 a.m.
Avenue B’s Queen of Latex Is Abdicating the Throne The Baroness is closing shop.
a beautiful life 9:30 a.m.
The Drag Queen Who Uses Makeup to Feel Invincible Talking to Kim Chi about her beauty brand, affordable products, and fame.
hot bod 8:00 a.m.
Yet Another Indignity for Olympic Athletes Why do we subject them to these interviews moments after competing?
style 8:00 a.m.
The Pursuit of Love Brings Studio 54 to World War II Emily Mortimer and Sinéad Kidao on how ‘70s rock looks a lot like the 1930s
¡hola papi! 6:00 a.m.
‘Help! I Have No Clue How to Act in a Relationship.’ It’s less important to avoid saying the wrong thing 100 percent of the time, and more important that you navigate those missteps with respect.
By J.P. Brammer
culture Yesterday at 4:06 p.m.
A Show of Strength Simone Biles proved how courageous she is, even if it wasn’t in the way we expected.
explainer Yesterday at 3:49 p.m.
I’m Vaccinated. Should I Be Worried About the Delta Variant? What we know about breakthrough cases and the most contagious COVID strain yet.
how i get it done Yesterday at 3:12 p.m.
A Night in Malibu With Cynthia Erivo and Lindsay Peoples Wagner And the chicest millennial pink Porsche.
absolutely not Yesterday at 2:20 p.m.
Who Wants Some Cursed Old Cake? A slice of Princess Diana and Prince Charles’s 40-year-old wedding cake is up for auction.
new faces of things Yesterday at 12:54 p.m.
Watch Miley and Her Mullet Get the Anime Treatment For Gucci’s newest flower-filled fragrance campaign.
More Stories