Some of the biggest names in the beauty industry can be spotted backstage during New York Fashion Week. Usually hidden by blow-dryers, brushes, and a model’s head, there’s an elite mix of nail experts (Jin Soon Choi, Tracylee), makeup artists (Pat McGrath, Gucci Westman), and a bevy of star hairstylists (Odile Gilbert, Paul Hanlon). Some of the more arresting runway beauty looks they dream up aren’t so practical for everyday wear: There were the multi-step Art Deco buns at Jason Wu, the two-tone ponytails at Alexander Wang, and the glitzy eyes at Thakoon. These all take a team of assistants and years of craftsmanship to master. But while the Cut was reporting backstage, we still picked up some easy, everyday tricks that would be easy to pull off in your own bathroom. Click through find out how to elongate the appearance of nails, create a headband from your own hair, and more. 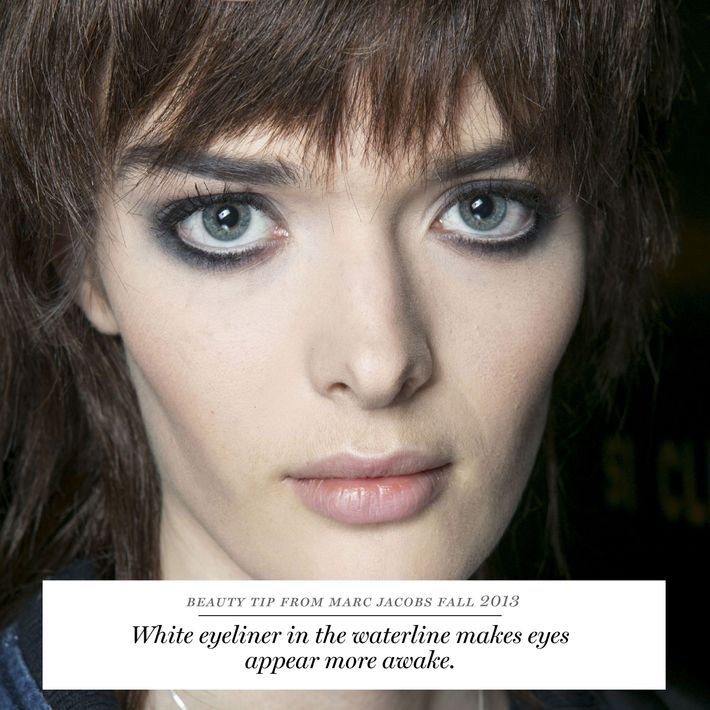 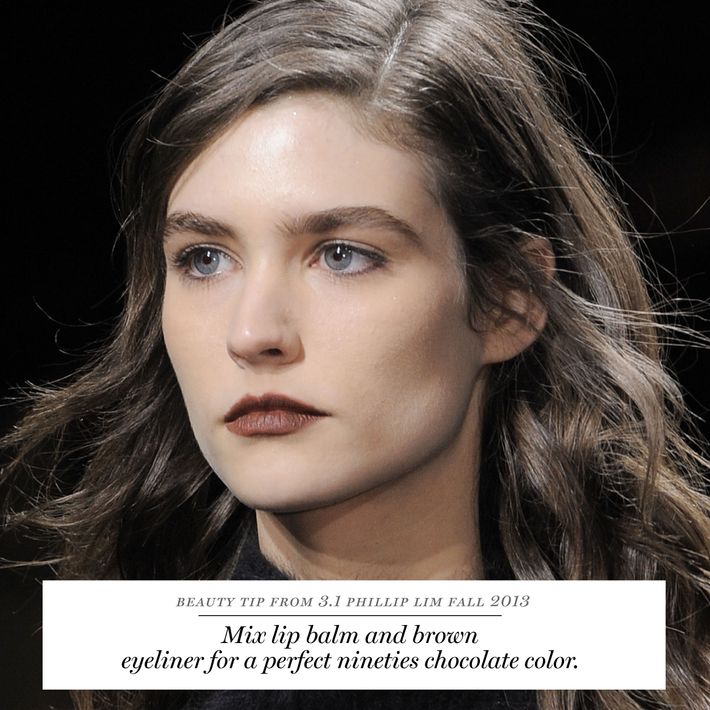 Tip: Francelle Daly applied a red-brown lip liner all over lips, then followed with a darker, chocolatey shade found in an eyeliner. To keep lips from drying out, first hydrate the mouth with lip balm. 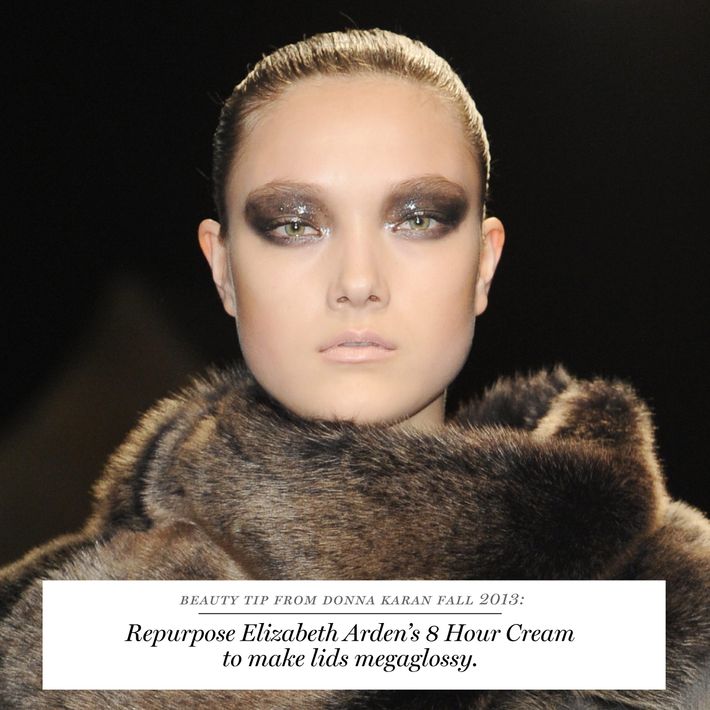 Tip: Apply an eye-shadow primer to lids before shadow application to prevent any unwanted creasing. Then, for that megawatt shine, Carlotte Tilbury uses fingers to dab on Elizabeth Arden Eight Hour Cream (a little goes a long way) over the eye shadow.

Tip: While the polishes from this Sally Hansen and Rodarte collaboration will not be available until fall, similar tones can be used for this nude and metallic-tipped manicure. 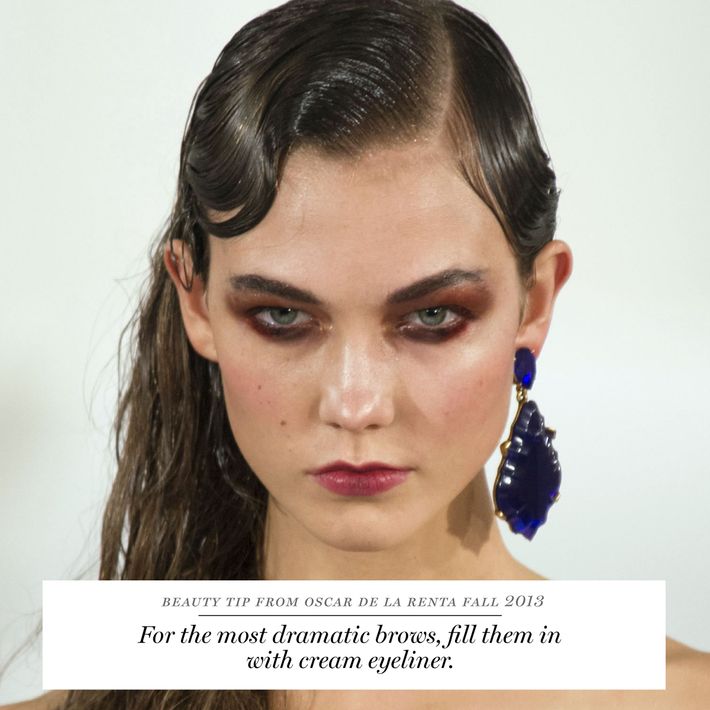 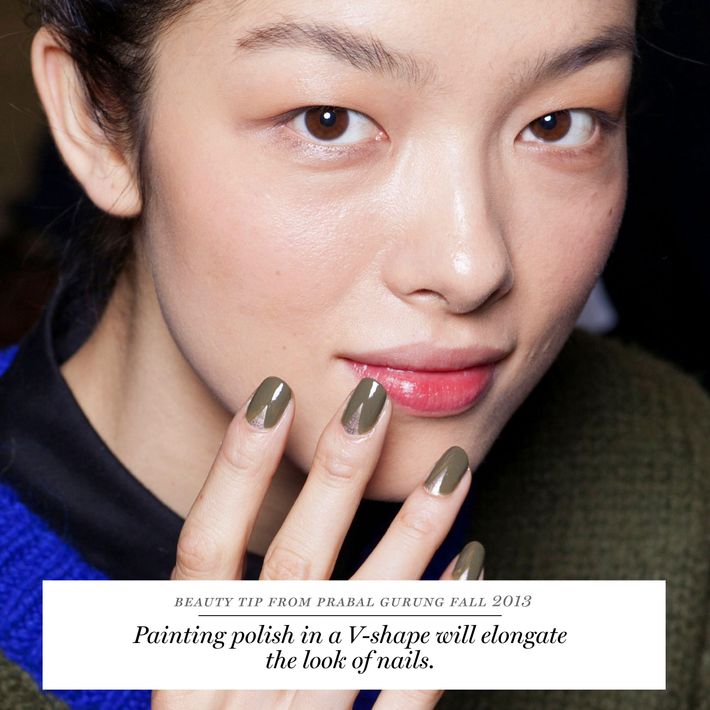 Tip: Using two different colors (like gold and olive green), manicurist Jin Soon Choi painted the darker, olive shade in a V-shape to lengthen the appearance of nails. The skinner the V, the greater the illusion. 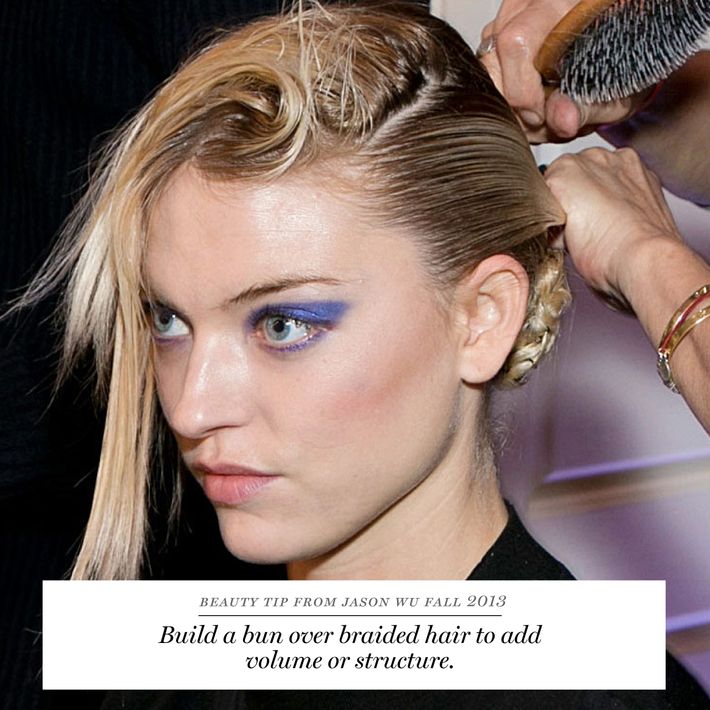 Tip: Odile Gilbert created multiple mini, horizontally running braids near the neck to form the “base” of a bun. Then layer and pin hair over this for a voluminous chignon. 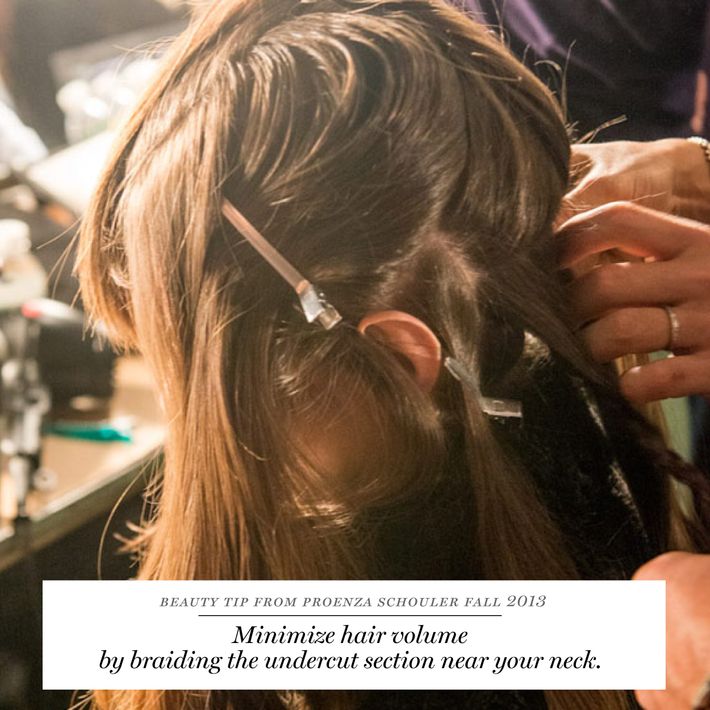 Tip: Paul Hanlon section off the bottom half of hair into multiple small parts. He then braided these into skinny, horizontally running rows, letting the rest of the loose, unbraided hair fall over this hidden section. It’s an easier fix than shaving out a nineties undercut. 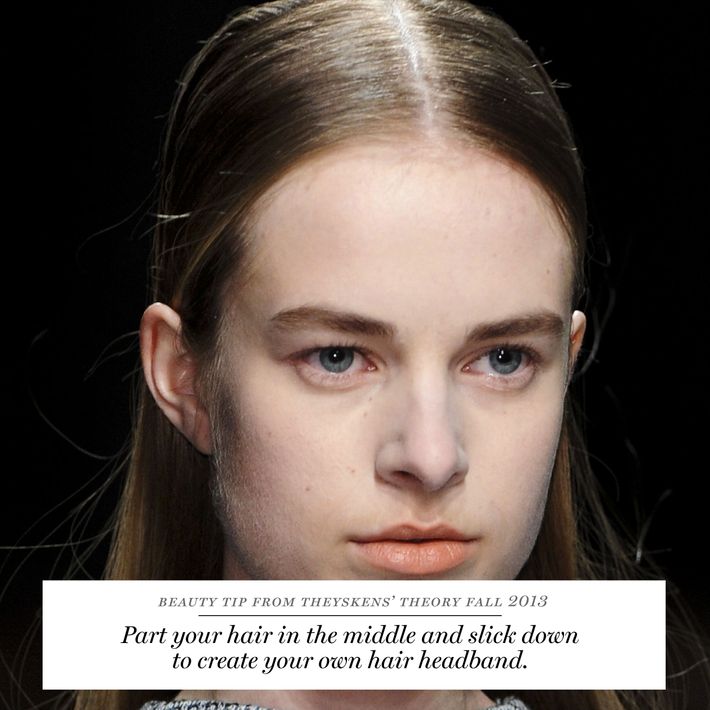 How to Create a Hair Headband: Theyskens’ Theory

Tip: After straight-ironing your hair, take the two 1.5-inch sections closest to your face (on either side of the center part) and slick them behind your ear. Odile Gilbert used plenty of Kerastase’s Ciment Thermique and Double Force hair spray to do this. She then secured these two sections underneath the rest, at the nape of the neck, with an elastic.

See All
gone sale-ing Yesterday at 2:46 p.m.
Shop the Best Black Friday 2020 Deals at Nordstrom Indulgent skincare, cozy sweats, and plenty of designer finds.
By the Cut
black friday 2020 Yesterday at 11:20 a.m.
Everything Worth Buying at Sephora’s Holiday Sale Including lots of Strategist favorites.
black friday 2020 Yesterday at 10:10 a.m.
All the Best Deals at Everlane’s Black Friday Sale Lots of Strategist-approved clothes and accessories up to 40 percent off.
hot bod Yesterday at 8:00 a.m.
This is the Perfect Time to Learn How to Dance This app taught me how to do a routine in heels.
acquiescence Yesterday at 8:00 a.m.
Turns Out It’s Pretty Good: The Sopranos I had my reasons for not watching it!
By Marianne Eloise
gone sale-ing Yesterday at 3:00 a.m.
Shop the Best Black Friday 2020 Deals on Amazon Markdowns on everything from skincare to jeans to kitchen appliances.
By the Cut
gone sale-ing Yesterday at 3:00 a.m.
All the Best Black Friday Sales A massive, comprehensive list.
By the Cut
glossy glossier glossiest Yesterday at 12:01 a.m.
Everything at Glossier Is On Sale Right Now Happy Black Friday.
By the Cut
my two cents Nov. 26, 2020
‘Many of These Women Don’t Even Know They’re Being Abused’ Economic abuse was insidious before the pandemic, but COVID has made it worse.
By Charlotte Cowles
they seem cool Nov. 26, 2020
The Artist Exploring the Layers of the Black Body Meet Devin B. Johnson.
By Devine Blacksher
acquiescence Nov. 26, 2020
Turns Out It’s Pretty Good: Aging I’m talking about joy, about having more life to live.
By Xochitl Gonzalez
coronavirus Nov. 25, 2020
Denmark’s Slaughtered Mink Are Reportedly Rising From Their Graves Weeks after the country began culling the animals over coronavirus concerns, their decomposing bodies are resurfacing.
hotshot Nov. 25, 2020
Haggard Tree Undergoes Stunning Glow-Up The Rockefeller Center Christmas tree got extensions.
holiday gifts Nov. 25, 2020
The 24 Best Gifts for the Foodie in Your Life Whether they’re into wine, coffee, or Sichaun spices.
By the Cut
a christmas miracle Nov. 25, 2020
Well, at Least There’s No SantaCon This Year Or, no official SantaCon, that is.
gift guides Nov. 25, 2020
The 11 Best Books to Give As Gifts Titles to satisfy everyone on your list, from fantasy obsessives to die-hard New Yorkers.
the object of our affection Nov. 25, 2020
One-of-a-Kind Jewelry Inspired By ’70s Glassware Brooke Callahan creates whimsical creations out of vintage and Italian glass.
social media Nov. 25, 2020
The Happiest Man on Twitter Chatting with Gerald Stratford, the British retiree who’s become famous for his big veg.
tastemakers Nov. 25, 2020
The Florist Using Bouquets for Good Kaylyn Hewitt’s new collaboration benefits Campaign Zero, which fights police brutality.
health Nov. 25, 2020
So When Exactly Will a COVID Vaccine Be Ready? Everything you need to know about the most promising candidates, how they’ll be distributed, and what happens after.
More Stories