Everything about Proenza Schouler’s show last night was adult. Those creamy white dresses? For sensible women who don’t spill red wine on themselves. The elegant low-heeled shoes? For those who won’t be referred to as “tottering.” As Lazaro Hernandez told Hamish Bowles backstage, “We’re not in our twenties anymore! We’ve grown up on a business level and aesthetically and we wanted [the collection] to feel that way.”

A few years ago, there was much talk of the Proenza designers joining the game of musical chairs at the major Paris fashion houses. Instead, they chose the alternate route, putting down deeper roots in New York. They forged ties with investor Andrew Rosen, opened their first store, and joined the board of the CFDA. According to a recent profile in the new T magazine, they also did a gut renovation of their house in the Berkshires, where they go every weekend. Rather than running around doing collaborations and “seeing how things go,” they’ve constructed a strong, focused future. Their fall 2013 collection, which was much more restrained and sleek than anything we’ve seen from them before, was a mature new direction.

Sasha Pivovarova, who is 28 and recently gave birth to her first child, opened the show, which was fitting: These clothes are growing up with the fashion-forward women who have worn them all along. Even the soundtrack — a steady, measured clicking — resembled the beat of a sure-footed woman’s heels on a marble floor. The clothes were also much more commercial. Gone were the crazy neons, retro crop tops, and peacocks. In their place were flattering knee-length dresses made of soft wool, tailored pencil skirts, and belted coats. As usual, there was an emphasis on texture, but it was more subdued: There was expensive ostrich leather, suede, and pony hair, all in a minimalist palette of black, white, mint, and lavender. The shoes — which will be more widely available, thanks to their new licensing agreement — looked like they could be worn all day and then out to dinner.

These designs might not be wildly eye-catching — they’re not street-style photographer bait, in other words — but maybe that’s the point. Perhaps this is partly Rosen’s influence; all the brands he’s affiliated with (Theory, Helmut Lang, and Rag & Bone) are very wearable, but not in-your-face “Designer [insert season here].” This is a collection that many women will want to buy and wear for a long time, not one that Zara will knock off in two weeks. It’ll sell well. And at the end of the day, isn’t pragmatism a big part of adulthood? 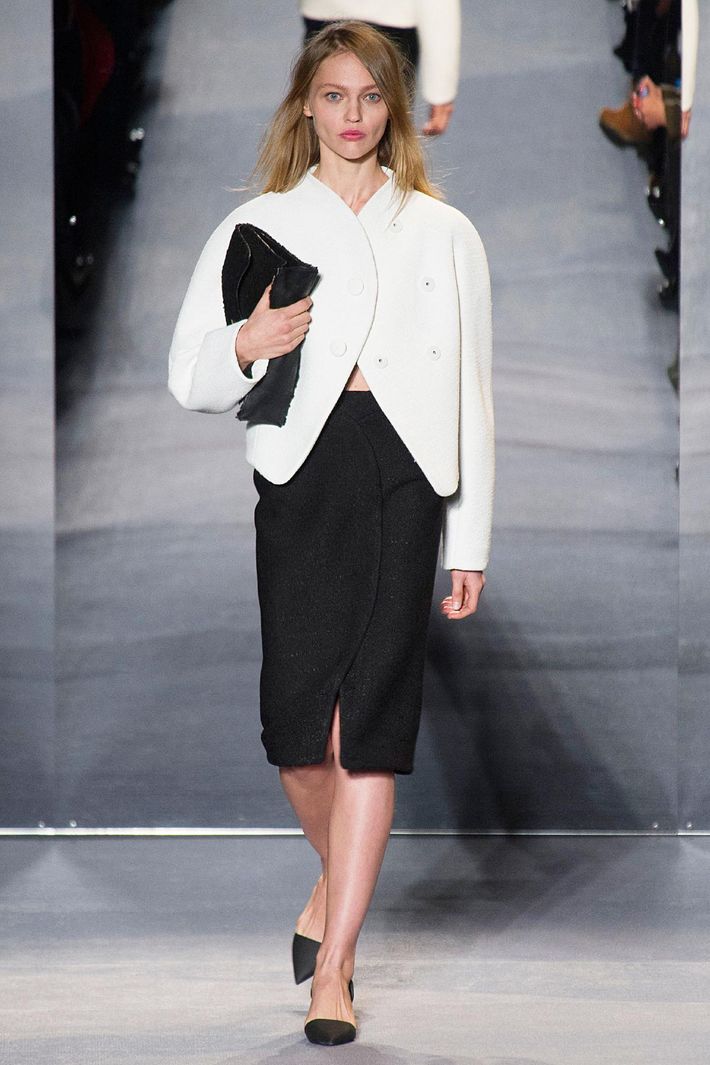 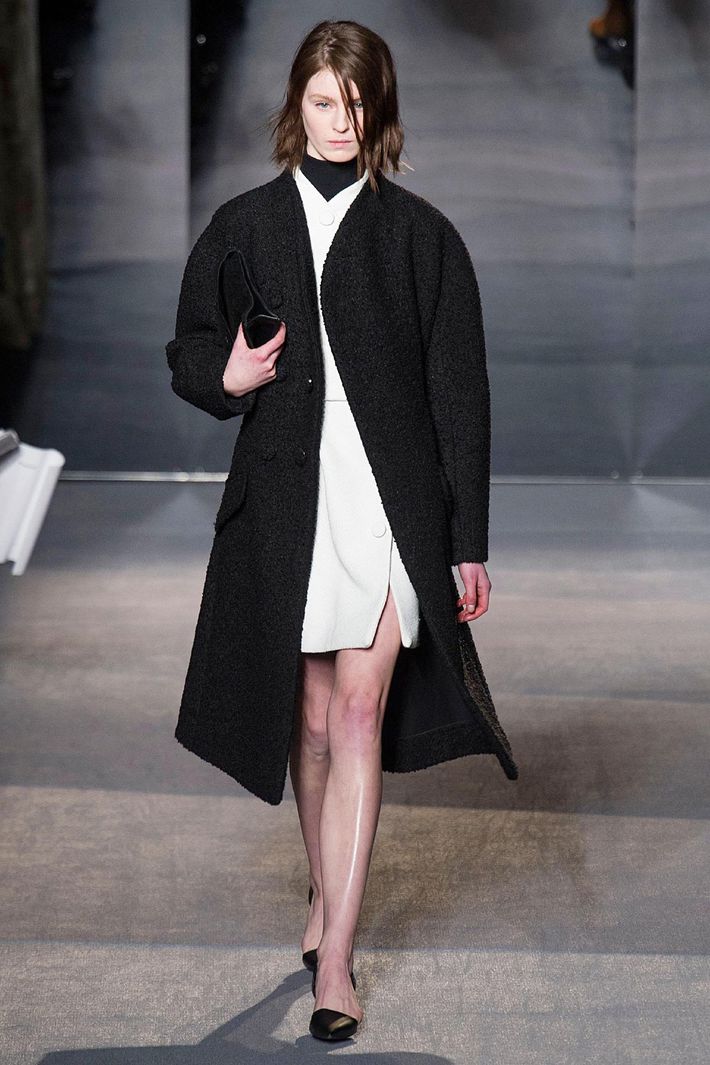 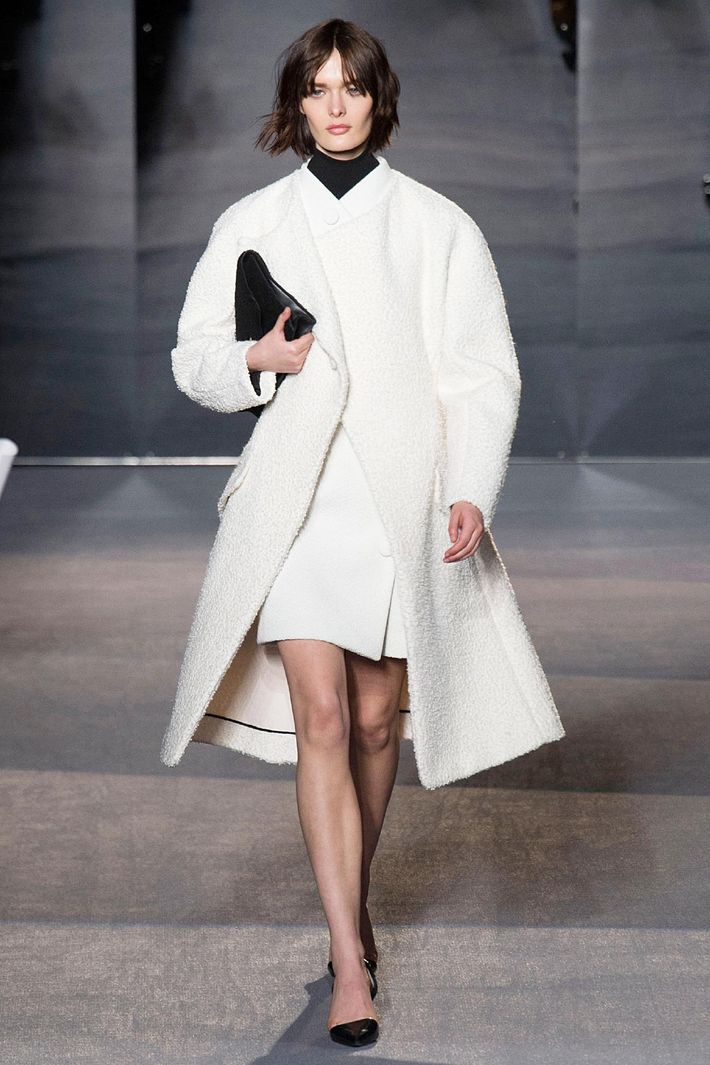 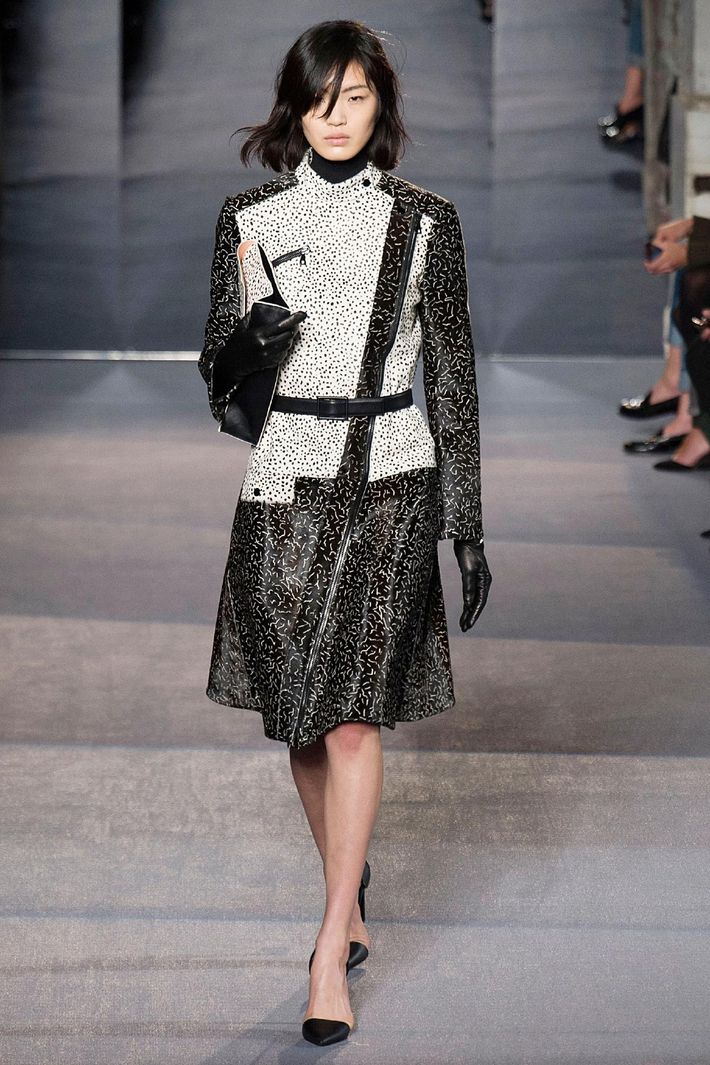 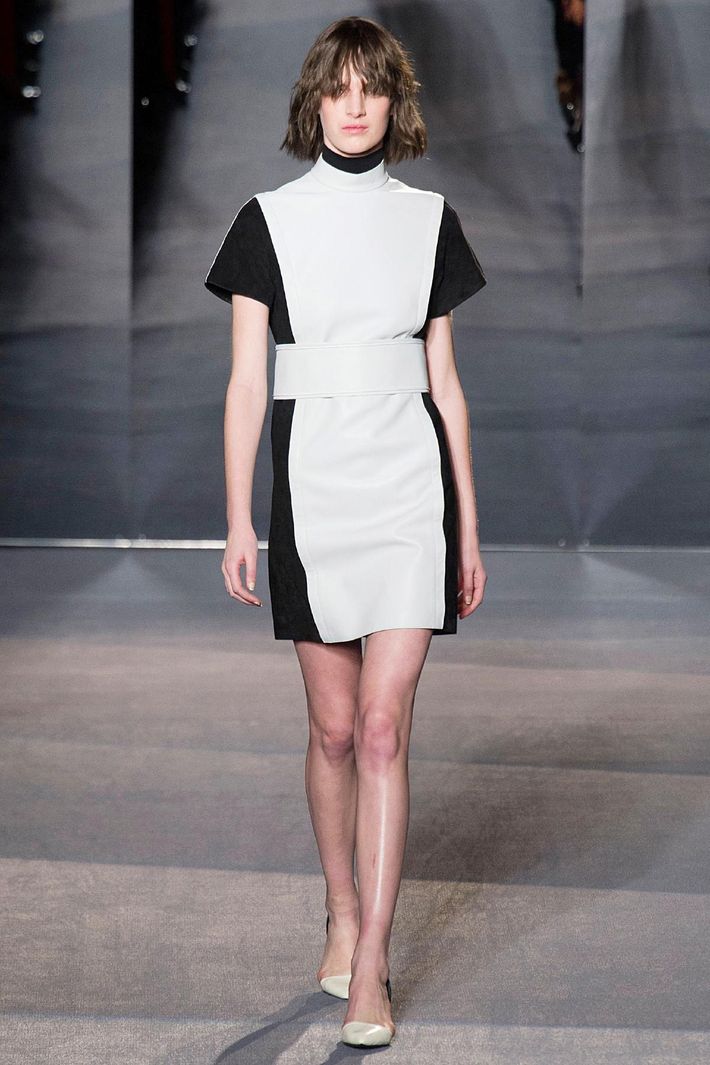 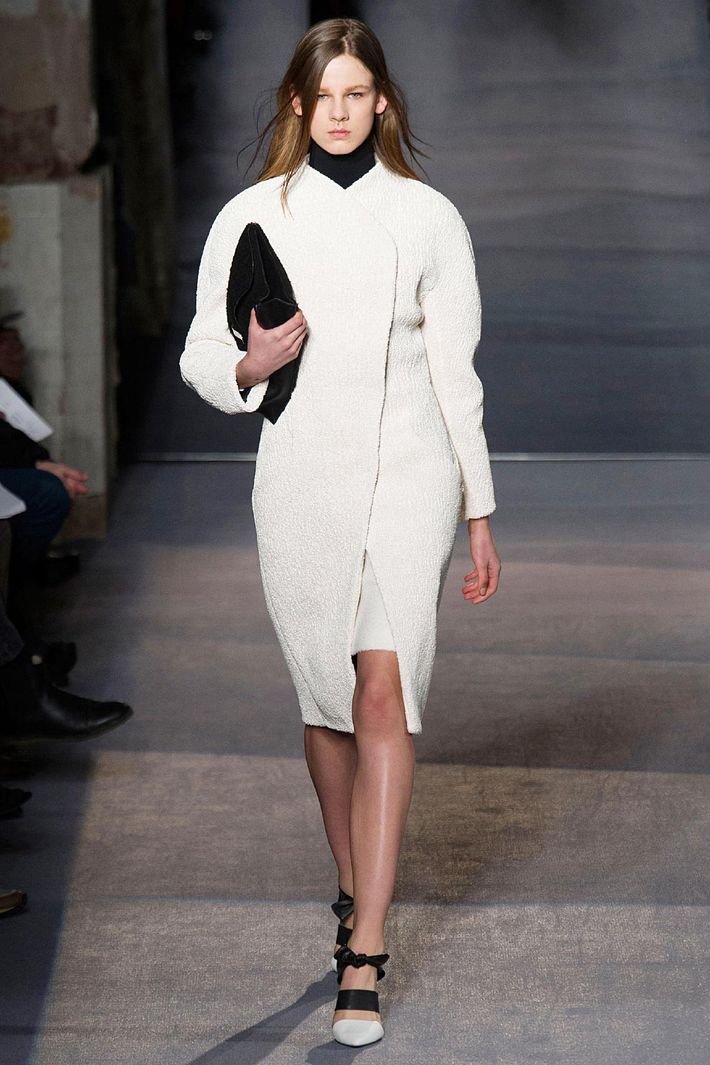 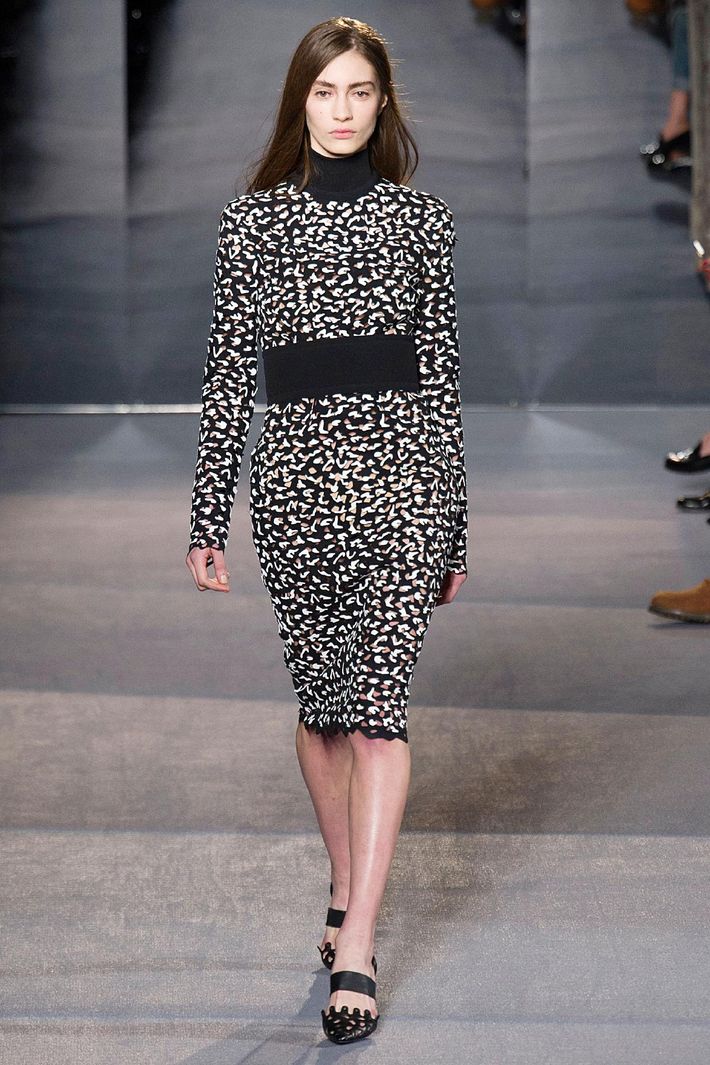 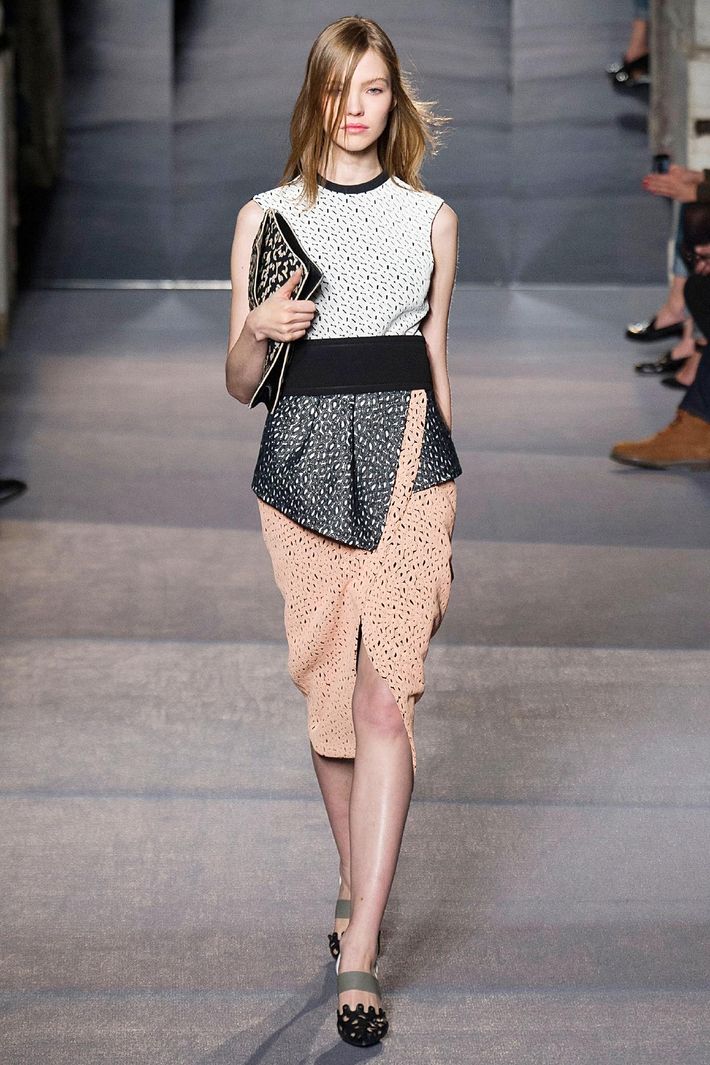 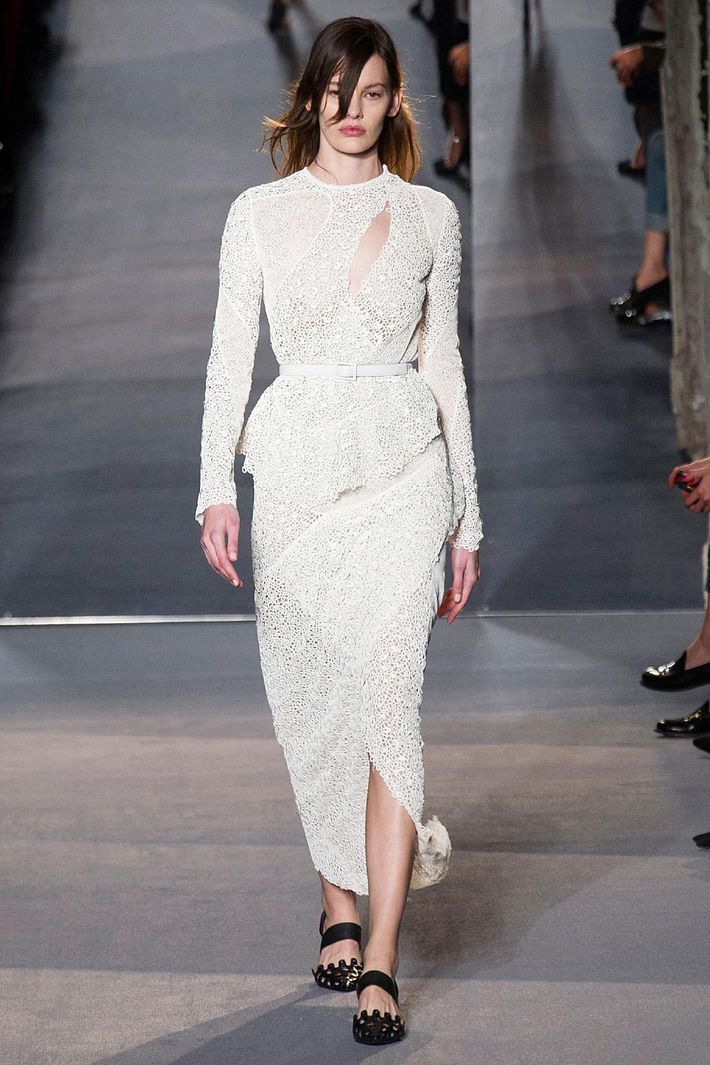 The 9 Most Grown-up Looks at Proenza Schouler

my two cents 8:00 a.m.
How to Find a Financial Adviser And how to know if you really need one.
By Charlotte Cowles
life after roe Yesterday at 5:30 p.m.
Some Hospitals Have Already Stopped Providing Plan B A health system in Missouri says it has stopped providing emergency contraception until the state’s abortion ban is “better defined.”
don't call it a comeback Yesterday at 5:14 p.m.
Cameron Diaz Is Coming Out of Retirement With a little help from Tom Brady.
crime Yesterday at 3:23 p.m.
R. Kelly Has Been Sentenced to 30 Years in Prison “The public has to be protected from behaviors like this,” a judge told the singer.
in sickness and in health Yesterday at 2:40 p.m.
Travis Barker Has Been Hospitalized He’s reportedly being treated for pancreatitis after a recent colonoscopy.
celebrity Yesterday at 2:14 p.m.
Lauren Conrad Reveals She Had an Ectopic Pregnancy “I wanted to share my own experience with lifesaving reproductive care.”
abortion Yesterday at 1:25 p.m.
Meghan Markle Calls On Men to Be Vocal About the End of Roe In a new conversation with Vogue, she spoke about the devastating impact of the SCOTUS ruling.
shopping Yesterday at 1:17 p.m.
What to Expect From the Nordstrom Anniversary Sale Deals incoming.
skin kare Yesterday at 1:08 p.m.
Kim Kardashian Is Being Sued Over SKKN A Black-owned beauty brand filed a suit alleging copyright infringement.
wedding etiquette Yesterday at 1:00 p.m.
The Bride and Groom Formally Request That You Dress Up The tyranny of wedding dress codes.
By Kayleen Schaefer
are u coming? Yesterday at 1:00 p.m.
You’re a Star on thecobrasnake.com! “It feels like 2007 again.”
By Brock Colyar
rtw fall 2022 Yesterday at 12:54 p.m.
Liberated From the Fashion Grind, Marc Jacobs Finds a New Tension On Monday night, Jacobs showed a collection deeply in touch with the digital world.
By Cathy Horyn
edgy haircuts Yesterday at 12:13 p.m.
Did Bella Hadid Shave Part of Her Head? Here’s how she actually got that Marc Jacobs look.
career Yesterday at 12:00 p.m.
‘Do I Have to Tell My Boss I’m Going to Rehab?’ No, you don’t. But can we talk about why you’re asking?
By Ana Marie Cox
scandale Yesterday at 11:59 a.m.
Is the Queen Beefing With Her ‘Favourite’ Cheese? She is reportedly thinking about revoking the royal crest from her preferred cheddar over a local environmental calamity.
launches Yesterday at 11:19 a.m.
June Had Some Really Good Beauty Launches From new Pat McGrath to Murad, these were our tried-and-true favorites.
best in class Yesterday at 9:30 a.m.
The 13 Very Best Plush Mattress Toppers A plush topper can be the icing on a mattress cake, one expert tells us.
By The Editors
5 questions with... June 28, 2022
Taraji P. Henson Wants to Move to Spain, Italy, or the South of France “Yeah, ’cause … I don’t know about this place anymore.”
celebrity June 28, 2022
Chris Pratt, Noted Bible Quoter, Says He’s Not Religious “I’m not a religious person,” says the man who posts Bible verses on Instagram.
gone sale-ing June 28, 2022
Ulta Beauty Is Doing a Sale It’s Never Done Your favorite hair products are on sale thanks to its Summer of Hair Love Event.
More Stories