Oscar host Seth MacFarlane’s boob song didn’t just irk normal women (and men) watching and tweeting angrily from their sofas; it made plenty of attendees uncomfortable too. But three of the actresses he sang about were evidently in cahoots with MacFarlane at some level, as they agreed to pre-record footage of their “reactions” to their shout-outs, which was then spliced in during the show. Does their implied condonement make the song less offensive?

When Naomi Watts was mentioned for her sex scene in Mulholland Drive, she looked appropriately horrified — perhaps a little too much so.

Charlize Theron acted pissed, too. (Of note: her boob-showing character was a rape victim, so do with that what you will.) 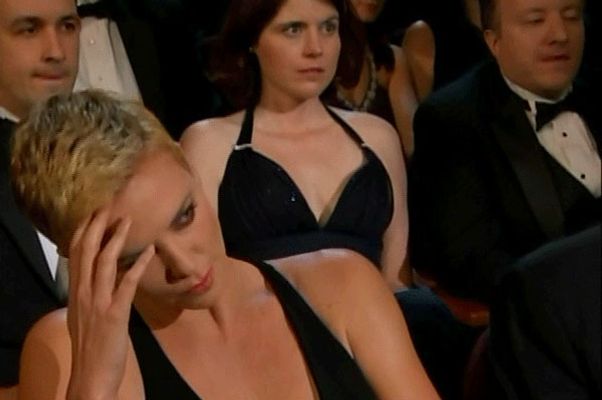 Jennifer Lawrence got a mention because, unlike the other song subjects, she has yet to show her boobs onscreen, so she got to do a fist pump: 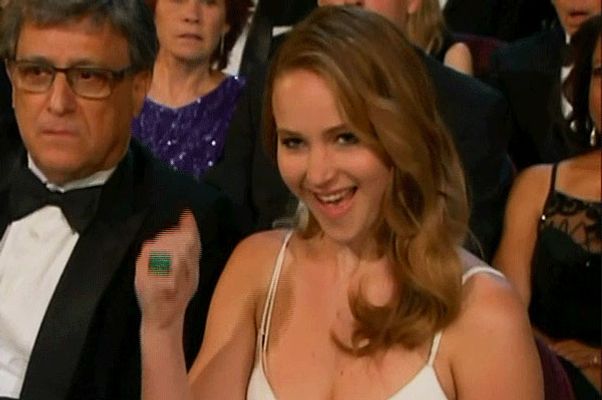 Update: This post has been updated to reiterate that the actress’s reactions were pre-recorded.

obsessive tester 11:06 a.m.
The Absolute Best Mascaras of All Time For every budget and need.
parenting 11:00 a.m.
My Queer Family vs. the Supreme Court If SCOTUS comes for marriage equality next, will I still be considered my son’s mother?
By Michelle Tea
allegations 10:21 a.m.
Unpacking the Allegations Against Ezra Miller Vermont police are unable to locate a woman and her three children who were living at Miller’s farm earlier this summer.
ugh why 9:46 a.m.
Kevin Federline Continues to Attack Britney Spears’s Parenting After Spears called his claims “hurtful,” her ex-husband posted footage of the pop star arguing with her sons four years ago.
my two cents 8:00 a.m.
‘I’m Good at Saving, But I’m Still Miserable’ Not to oversimplify matters, but what if you thought about money less?
By Charlotte Cowles
accidents Yesterday at 7:30 p.m.
Anne Heche in a Coma, Under DUI Investigation, Following Car Crash According to a representative, she has remained in a coma since shortly after the accident.
style Yesterday at 5:50 p.m.
5 New York City Dance Companies, Brought Together The shows, which continue through Saturday, are free and open to the public.
celebrity Yesterday at 4:28 p.m.
Olivia Wilde Didn’t Appreciate Being Served Custody Docs Onstage In new court docs, she said ex Jason Sudeikis “clearly intended to threaten me.”
power Yesterday at 4:02 p.m.
Did Armie Hammer Really Think Voice Notes Were a Good Idea? In the trailer for House of Hammer, the actor shares a violent sexual fantasy in a voice note played by one of his exes.
recommendations Yesterday at 3:00 p.m.
18 Best Butt Plugs You Can Buy Online According to experts.
okay?? Yesterday at 2:41 p.m.
Oscar Isaac Is Still Struggling to Explain That Red-Carpet PDA Apparently he and Jessica Chastain are … like flatworms?
love and war Yesterday at 2:03 p.m.
Tinder’s Fatphobia Problem The dating app’s hold on the culture began around the same time as the mainstream body-positive movement. So why hasn’t anything changed?
By Kelsey Miller
do i need this? Yesterday at 2:03 p.m.
Do I Need a One-of-a-Kind Piece From Éliou’s New Clothing Line? The collection will pair nicely with the beaded necklaces beloved by Harry Styles.
intimacy coordinators Yesterday at 1:17 p.m.
Amanda Seyfried Reflects on Feeling Pressured Into Nude Scenes “I didn’t want to upset anybody, and I wanted to keep my job.”
??? Yesterday at 12:12 p.m.
Prince William Apparently Has Another Sexy Nickname In addition to the “Prince of Pegging,” of course.
parenthood Yesterday at 12:05 p.m.
Mindy Kaling Does Not Care Who You Think Her Kids’ Father Is Apparently, speculation that it’s B.J. Novak doesn’t bother her.
sobriety Yesterday at 12:00 p.m.
‘Can I Stay Sober Without Counting the Days Since My Last Drink?’ If adding up the days one by one makes you feel bad, rethink the math.
By Ana Marie Cox
life after roe Yesterday at 11:20 a.m.
Mom and Teen Daughter Accused of Illegal Abortion Based on Facebook Messages Police obtained Facebook messages in which they discussed ending the then-17-year-old’s pregnancy with pills.
encounter Yesterday at 10:00 a.m.
Abbi Jacobson Knows the Pressure Is On A League of Their Own, her first big project since Broad City, premieres this Friday.
By Katie Heaney
celebrity Aug. 9, 2022
Has Camila Cabello Moved on With a Dating-App Founder? She was recently seen holding hands with Lox Club founder Austin Kevitch.
More Stories