At last night’s party honoring Jason Wu’s inaugural gown, hosted by Glamour’s Cindi Leive, guests were already taking precautions against potential flu-spreading. Wu himself forced everyone in his office to get vaccinated this year. “I made them, and no one has gotten sick! Knock on wood,” he said. Meanwhile, Bergdorf Goodman’s Linda Fargo says she’s forgoing cheek kisses this season. “It’s like, what am I double-kissing you for? I don’t know you! And on that note, good night!” she said, waving and walking away sans embrace. Meanwhile, Chanel Iman recalled her epic hug from Michelle Obama, IMG Models’ Ivan Bart discussed his hunt for the male Kate Upton, and Stephanie Seymour (Wu’s spring 2013 face) discussed her sons’ Twitter feeds. Read more in our slideshow.

What was it like to meet the Obamas at the inauguration? Michelle gave me a huge hug that lasted, I felt, for like eight or ten minutes – it was so strong, and just so much love that she shared. – CHANEL IMAN

Will you walk in Jason Wu’s show, since you’re the face of his new campaign? I would do it if he asked. I’ll be going to Jason’s show. And I’m doing a piece for Interview about Jason. Do you follow your kids’ Twitter feeds? We’ve tried to cut down on that a little bit. They’re kids. They’re really fun, clever, loving, good kids – with a lot of style. They’ve been like that since they were little boys. They used to lay outfits out for me, even if I just had a parent-teacher conference. They would lay a dress out with a belt and the shoes and everything. And it’s like, ‘Petey or Harry, I can’t wear this to your parent-teacher conference.’ It’d be like a 1955 Dior dress with matching silk pumps. But I always let them do it because I thought it was really good for their imagination. – STEPHANIE SEYMOUR

Your mom was saying you used to pick outfits for her when you were little. Yes. When we were little?! We did just a couple nights ago! It was amazing. Leather Alaia dress, really, really tight, almost sheer, elastic stretchy top he did over it. A beautiful art deco piece with just plain black string – divine. Do you gossip with her about parties over breakfast the morning after? If I had the luxury of getting up the time that she does! I have to go to school at eight o’clock in the morning. I am hauling my ass back to Connecticut tonight, but we do have the nighttime talk, where I sit in her dressing room for hours and we talk and talk. – HARRY BRANT

How are you staying flu-free this season? I get to sleep early. 10, 11 o’clock is my curfew. I wake up early. I exercise. And I always take Baroka, my vitamins. I might do a face mask. We’ll see how it looks. I have them in two different prints, a black-and-white diagonal stripe and a fluorescent green psychedelic printed mask. And a white one, plain white. I don’t know how it would look, though, sitting there and people taking your picture while you’re wearing a mask. – BRYANBOY

Your modeling agency [IMG] has done amazing things with Kate Upton over the past year. Any goals for 2013? My goal is to accomplish for a man what we did for Kate Upton. The 21st century is about the modern man, and the modern man needs aspirational, inspirational people. Kate Upton is inspirational and aspirational, and why shouldn’t there be a male model that inspires people? I want to find the male model that connects to this generation, that’s working the new media and has followers everywhere. Kate has done an extraordinary job with that, and I’m going to find the guy. Any favorite names right now? My favorite actor of the moment is Adam Driver. He’s already Terry Richardson’s fave. – IVAN BART 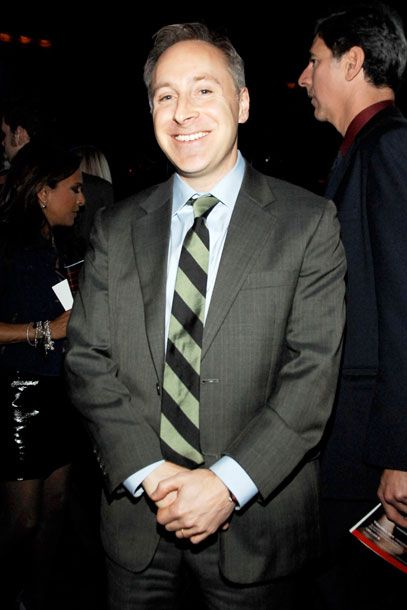 Do you and your wife [Deborah Needleman] ever edit each other’s work? Frequently, of things we’ve written. We’re both sort of available to help each other. But we don’t collaborate on stuff, really. How does your life change during Fashion Week? I become a single parent. Hardest job in America, as George W. Bush used to say. But our kids are a little older now, so it’s not so bad. But I’m definitely the custodial parent during fashion week, or fashion month. – JACOB WEISBERG

What was the starting point for designing Michelle Obama’s inauguration dress? I used a fabric that was custom-made for her. The inauguration is so momentous, it had to be something made just for the occasion. So I had the fabric made in Paris, and I collaborated with Kimberly McDonald to make a real diamond ring that the dress was draped around. – JASON WU

Any pre-fashion week rituals? I do a family dinner with my children. And I kiss them goodbye and tell them I’ll see them in a month. We’re actually having a family party the night of the Super Bowl. We have about a hundred people over with adults, kids, there’s literally about a hundred adults and about fifty kids running around. I make an enormous, enormous chili, and it’s a big family night. And then the next time I see my kids it’s probably in March. – CINDI LEIVE

Are you worried about getting the flu at fashion week? I got a flu shot, but I know that won’t prevent all the different strains. I’m really just going to try to say no – not as many hellos and kisses with people I know less well than my doorman. I mean it. It’s like, what am I double-kissing you for? I don’t know you! And on that note, goodnight! [Walks away without a kiss.] – LINDA FARGO

very online 4:59 p.m.
Here’s What a Metaverse Rave Is Like, I Guess In fairness, I couldn’t figure out how to make my avatar dance either.
no! 4:33 p.m.
Let the M&M’s Be Hot and Mean A rude corporate rebrand has decided the M&M’s characters should be … progressive?
enough 12:46 p.m.
What Else Can We Put in Space? Apparently, someone is building a movie studio and sports arena out there.
power 12:00 p.m.
Working Through the End Days of Roe The staff at the Jackson Women’s Health Organization is too busy to dread what’s very likely to come.
science 11:22 a.m.
Give Me the Goth Space Diamond Sotheby’s is expected to sell the 555.55-carat black diamond for at least $6.8 million.
my two cents 8:00 a.m.
‘I Was Harassed at Work. Can I Afford to Sue?’ Taking legal action might be more feasible than you think.
By Charlotte Cowles
recap 8:00 a.m.
And Just Like That … Miranda Blows Up Her Life, Again At least Harry doesn’t have penis cancer.
first person 7:00 a.m.
The First Time Was Terrifying. Now, It’s Just Excruciating. My family’s second bout with COVID might be worse.
By Reyhan Harmanci
valentine's day 7:00 a.m.
40 Valentine’s Day Gifts From Target All the heart-shaped products your heart desires.
zodiac seasons 7:00 a.m.
Your Guide to Aquarius Season Now is the time to be inventive and rebellious.
By Claire Comstock-Gay
succession Yesterday at 7:54 p.m.
Let This Brian Cox Quote Be Your Guide The Succession star is “too old, too tired, and too talented,” and, honestly, same.
tv Yesterday at 6:23 p.m.
Here’s Sebastian Stan on Filming With an Animatronic Penis The actor had a one-of-a-kind experience filming Pam & Tommy.
valentine's day Yesterday at 3:11 p.m.
58 Gifts for the Person You Love They deserve the world, but these picks will work too.
celebrity Yesterday at 1:59 p.m.
Finally, Something Bono and I Can Agree On He is apparently embarrassed by “most” of U2’s music.
news Yesterday at 1:56 p.m.
Cardi B Offers to Pay Funeral Costs for Bronx Fire Victims Last week’s apartment fire left 17 people dead and over 60 injured.
self Yesterday at 1:15 p.m.
I’m Tired of Explaining Why I Don’t Drink We have to expand our language beyond “sober.”
By Sarah Wood
remembrances Yesterday at 12:39 p.m.
The Fashion World Remembers André Leon Talley Designers, writers, and celebrities paid tribute to the inimitable fashion icon, who died on Tuesday at 73.
vampires Yesterday at 12:08 p.m.
Megan Fox’s Engagement Ring … Bites? “The bands are actually thorns. So if she tries to take it off, it hurts.”
celebrity Yesterday at 11:03 a.m.
Tracing the Ongoing Feud Between Britney and Jamie Lynn Spears Things spiraled out after Jamie Lynn went on Good Morning America to promote her new book.
style Yesterday at 9:35 a.m.
Anna Wintour Remembers André Leon Talley The Vogue editor mourned her friend and former colleague, calling him “a brilliant and compassionate man.”
More Stories