Although only Oscar de la Renta accepted the crowd’s applause at his show today, one could easily imagine an elaborate, John Galliano–style bow at the finale. The former Dior designer has been working at De la Renta’s studio for the past three weeks and was backstage with the models this afternoon. While Galliano’s involvement with the finished product remains unclear, De la Renta recently told New York, “I like hearing what he thinks should be changed and improved about each piece we are showing in the fall collection.”

It would appear that Galliano “changed and improved” quite a bit. The exaggerated cloche hats, reminiscent of those worn on Dior’s fall 2008 runway, captured his love for towering headpieces. A series of sheer skirts rendered in layered chiffon, deep-V necklines, and belted waists echoed the Galliano silhouette. (The Times’ Eric Wilson writes, “Mr. Galliano and his colleagues, according to those at the studio, spent hours leading a seminar in how to tie the belts properly.”) Even the show’s makeup artist, Gucci Westman, cited “John’s” input several times when describing the beauty look — Marcel waves, smoky eyes, and wine-colored lips.

Most notable was the theatricality of it all: the color palette (puce!), hooded and billowing capes, and, of course, a veil. This was a new and different level of drama than we’re accustomed to seeing from De la Renta, but one that’s characterized Galliano’s career. Which, it seems, is on its way to recovery. 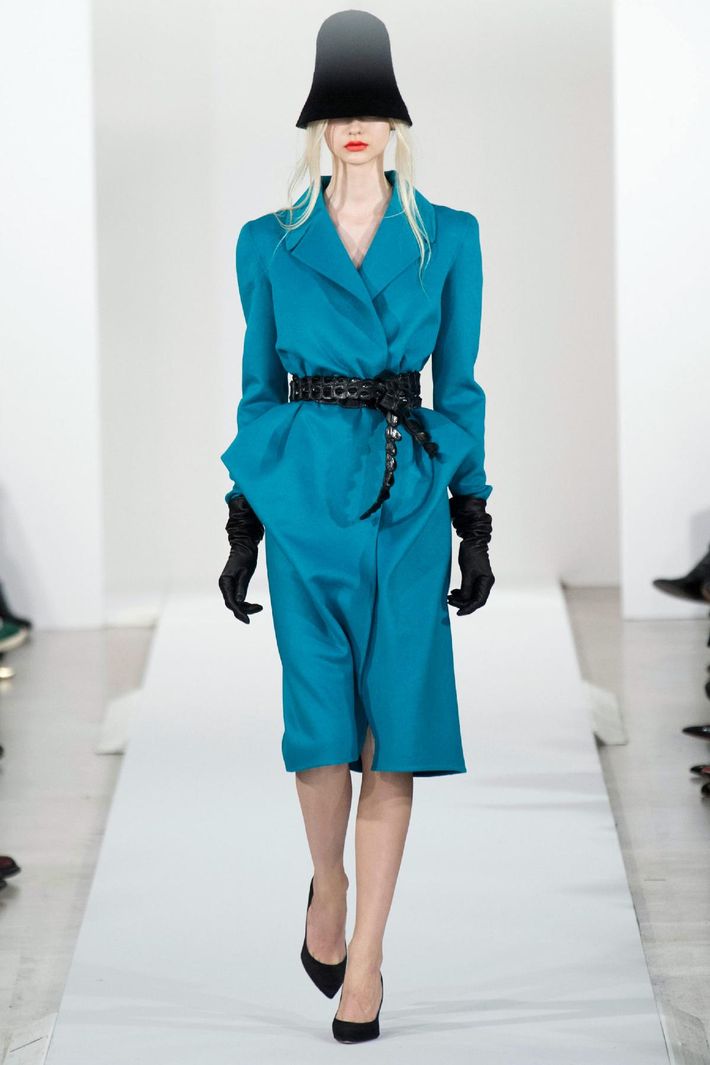 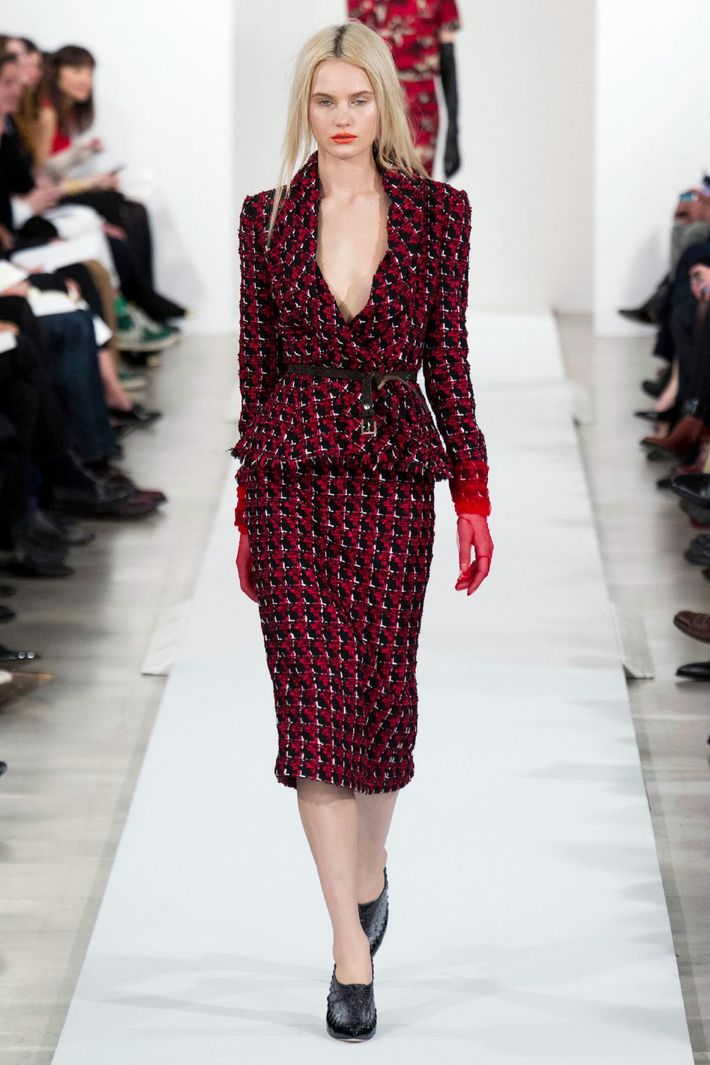 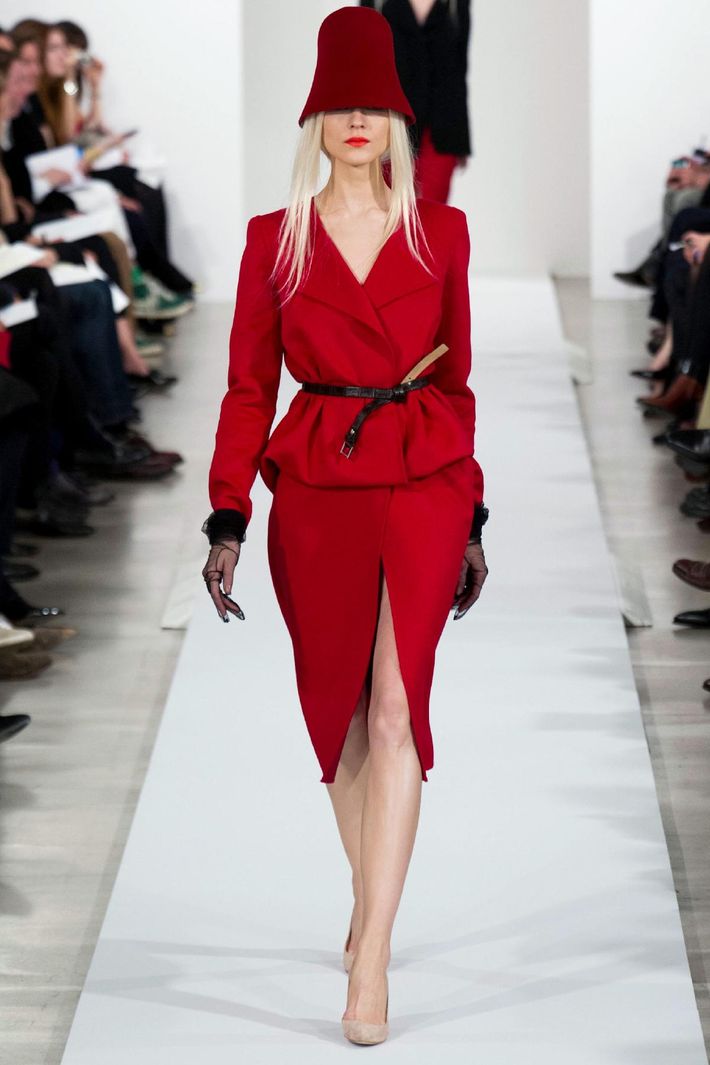 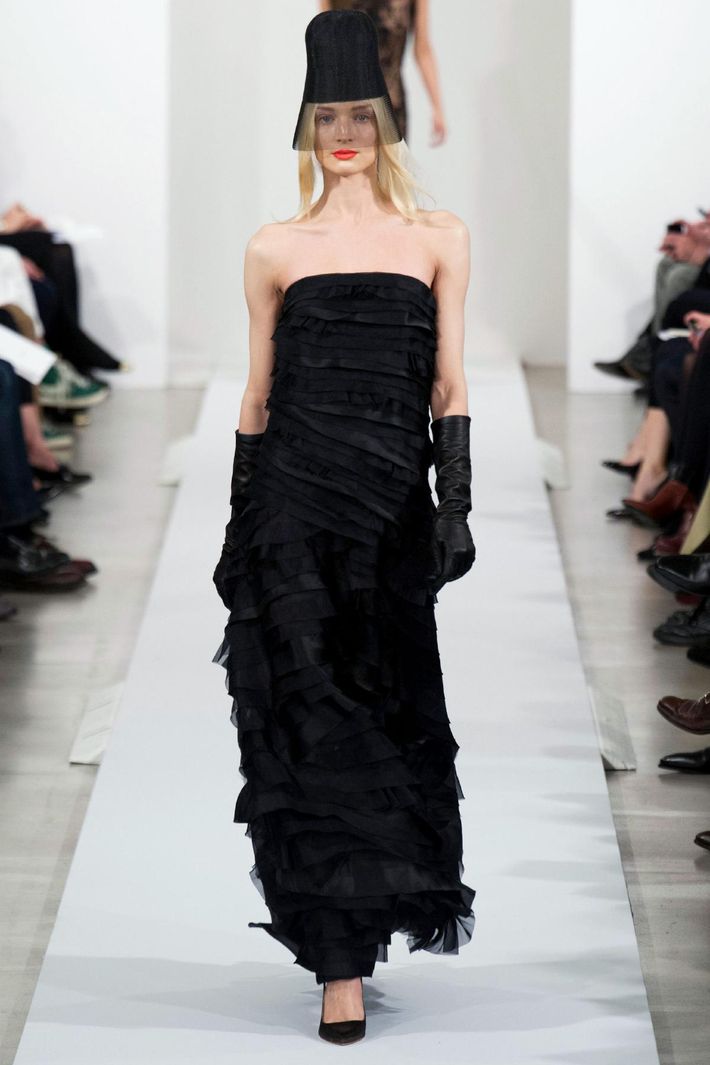 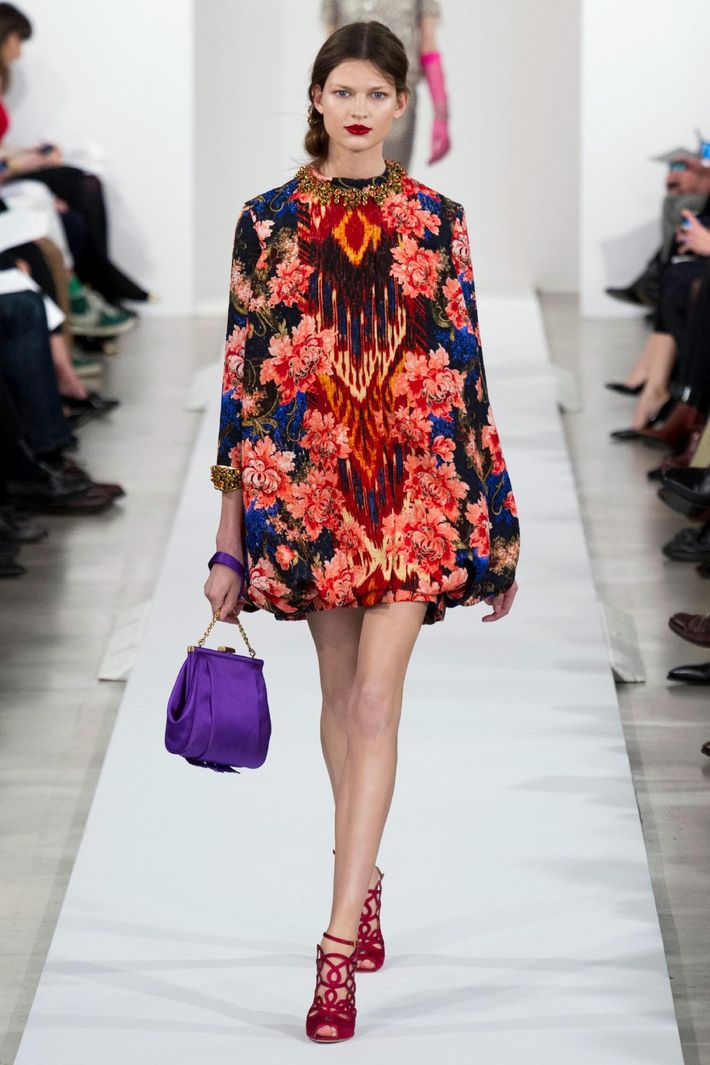 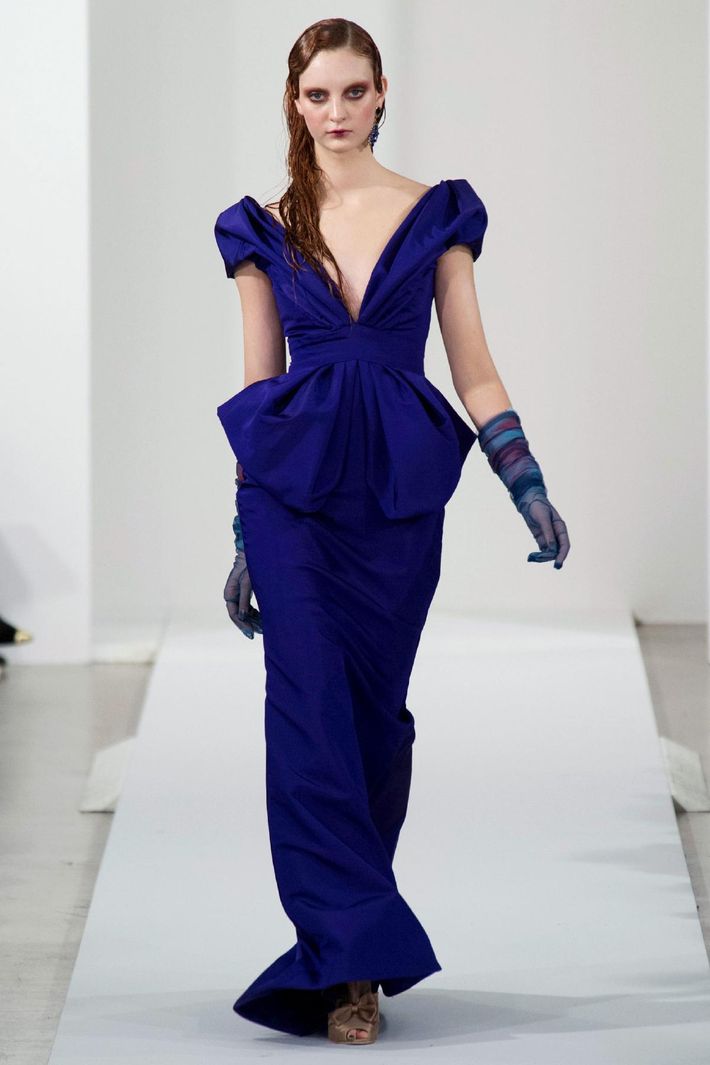 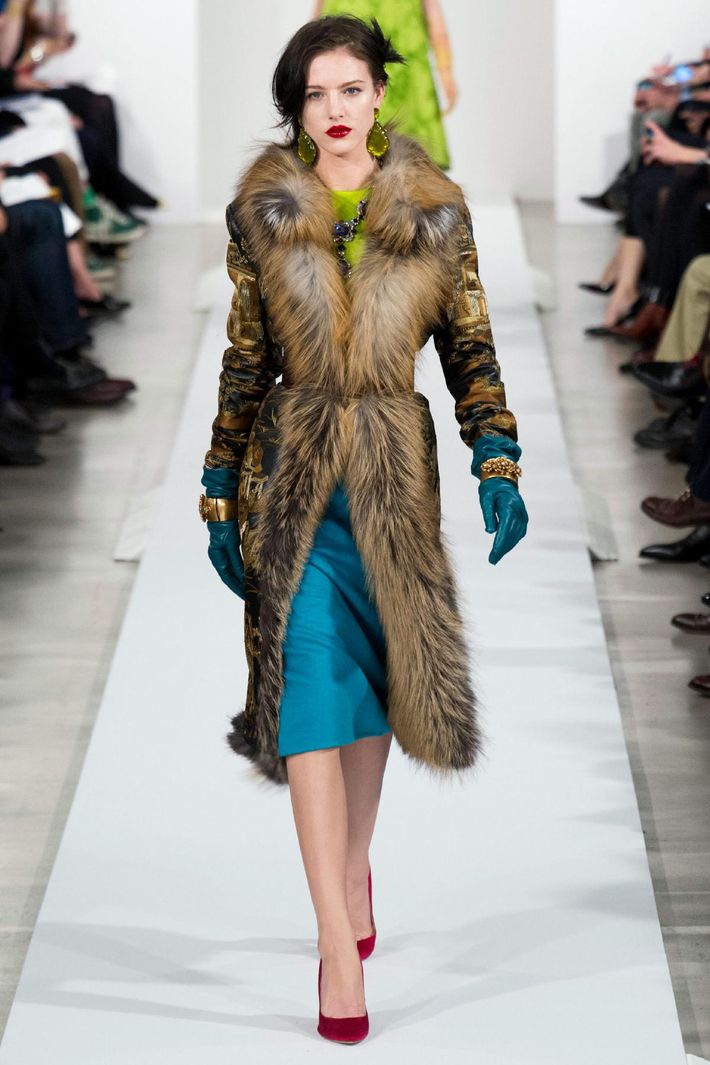 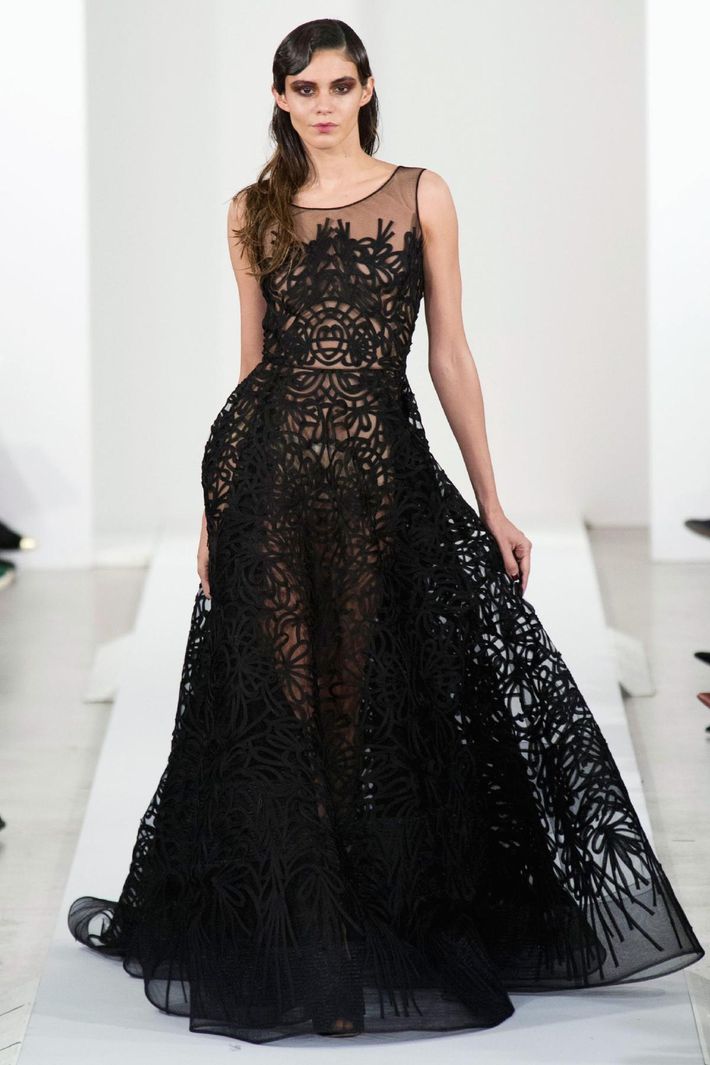 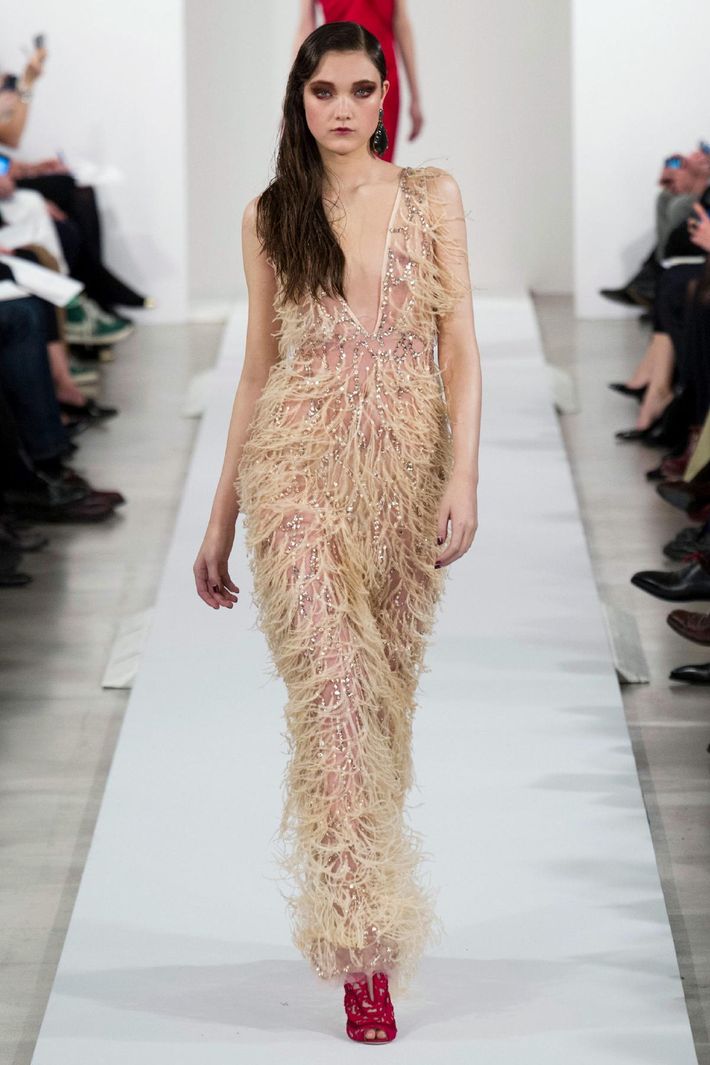 The Most Galliano-ish Looks at Oscar de la Renta

rust Yesterday at 5:50 p.m.
Everything We Know About the Rust Shooting An FBI report concludes that the trigger must have been pulled.
sure why not Yesterday at 4:49 p.m.
Are Brad Pitt and Emily Ratajkowski Really Hanging Out? Rumor has it EmRata has “the vibes that Brad likes.”
soho grifter Yesterday at 4:34 p.m.
Anna Delvey Is Getting Out of Jail Having “demonstrated interest in pursuing legitimate employment in the United States,” a judge ruled.
pfw spring 2023 Yesterday at 4:26 p.m.
The T-shirt, Beloved by All, Gets a New Look By Miu Miu, nonetheless. Plus: Louis Vuitton shows a trove of great accessories.
By Cathy Horyn
what the what Yesterday at 4:16 p.m.
Carrie Is a Pigeon Lady Now Is that a real-life bird? No, it’s an $890 designer clutch.
celebrity Yesterday at 3:37 p.m.
What’s Going On With Harry and Meghan’s Netflix Docuseries? The Duke and Duchess of Sussex are reportedly at odds with the producers.
obsessive tester Yesterday at 3:00 p.m.
21 Self-tanners to Maintain Your Summer Glow Through Winter Natural and easy to apply.
power Yesterday at 2:51 p.m.
Iranian Forces Led Brutal Crackdowns Against University Protesters Despite forceful government intervention, women continue to take to the streets in defiance of government orders.
tv Yesterday at 2:32 p.m.
Excuse Me, Who Is This British Baking Show Hunk? Hellooo, Sandro!
what's the reference? Yesterday at 2:15 p.m.
An Early Aughts Staple Has Us in a Hold A personal shopper gives us tips on how to wear a camo miniskirt.
art and soul Yesterday at 1:50 p.m.
The Art of Motherhood In paintings, illustrations, and ceramics, artist Madeline Donahue captures the ecstasy and agony of being a mom.
By Amil Niazi
holiday gifts Yesterday at 1:31 p.m.
16 Gifts That Keep On Giving Whether they’re bandanas for abortion rights or cutting boards to feed the elderly.
power Yesterday at 1:01 p.m.
This Congressional Candidate Gave Birth On-camera “It’s important for folks to see how pregnancy and birth is a medical event that occurs in a hospital with doctors,” says Louisiana’s Katie Darling.
style Yesterday at 1:00 p.m.
Gigi Hadid Called Out Ye for ‘Bullying’ After His YZY Show Ye went after Vogue contributing editor Gabriella Karefa-Johnson on Instagram after she disapproved of his “White Lives Matter” shirt.
celebrity Yesterday at 12:51 p.m.
Angelina Jolie Claims Brad Pitt Choked One of Their Children Pitt’s rep called the allegations “completely untrue.”
pfw spring 2023 Oct. 4, 2022
A Comedy of Errors at Paris Fashion Week This has been an utterly ridiculous Paris season, in the best and worst sense. And it’s not over yet.
By Cathy Horyn
fashion Oct. 4, 2022
How Bella Hadid’s Spray-on Dress Was Made We were just as confused. So we found out.
power Oct. 4, 2022
‘Pro-Life’ Candidate Denies Report That He Paid for an Abortion Herschel Walker’s own son denounced him after an alleged ex-girlfriend told the Daily Beast that Walker had paid for her abortion.
always shopping Oct. 4, 2022
12 Best Pairs of Leggings for Running in the Winter We spoke with runners to round up the warmest leggings so you don’t have to.
blackpink Oct. 4, 2022
What’s Going on With BLACKPINK’s Leaked-Photo Drama? Everything to know about Jennie and V’s photo leak.
More Stories