When she was young, Olivia Bee took bad photographs.

After accidentally being assigned to a darkroom course in sixth grade, Bee began putting much of her life in Portland, Oregon, on Flickr. At first, by her own admission, her shots weren’t so hot: “Like, stuffed animals and a picture of my mom in the kitchen.” On the Internet, she would research Nan Goldin, Annie Leibovitz, and early Terry Richardson. And she began chronicling her own pals as they went about their joyous, dirty, agrarian shenanigans: a tween in a bikini, for example, stuffed into a washbasin, covered in Technicolor splashes of paint.

She kept playing, bought a new camera, and it didn’t take long for Bee to arrive at what’s become her hallmark today: dreamy, seventies-inspired photographs of maybe-wasted, increasingly famous young people who just want to have fun, injected with ombré washes of color (often pink). She frequently places her subjects in the middle of the frame—despite what art school would teach her about the rule of thirds, essentially that off-center composition makes images more interesting.

Her early photos burst across social media, and the folks at Converse picked up on her work. The shoe company had their ad agency reach out, but she didn’t respond until she saw a note from an actual Converse e-mail address. Not long after, Nike flew her to Hawaii, she spoke at a TEDX conference in Amsterdam, and  she traveled to Paris for exhibits, much to the annoyance of some of her high-school teachers, including her precalculus one, who told her, “Taking pictures isn’t a big deal.” When it came time to apply for college, she chose only one: Cooper Union. She wasn’t admitted, so she decided to focus on her career full-time; “lifelong summer” is what she called this decision on her blog. “I didn’t want to go to photo school, because I didn’t want to change the way I saw my work,” she explains.

Bee has shot nearly all her young—and barely clothed—pals for indie European magazines. She’s also been published by The New York Times Magazine, for whom she shot Zosia Mamet, of Girls, and she has an ongoing series in the French paper Le Monde. Fiat and Subaru have both commissioned her, as have four publishing houses in need of covers (she still hasn’t read all of the books). She’s working with a seventies Parisian label that’s looking for a makeover. She’s captured both skinny twentysomethings and husky teens for Levi’s. She’s shot an Adidas campaign. She’s made the new cast of Degrassi seem cool for TeenNick.

“She’s doing all these photos with her friends and herself, which gives the pictures a feeling of reality,” says Stéphane Wargnier, an editor at Le Monde d’Hermès who hired Bee to shoot a cover. “It’s the exact opposite of Russian models and big-name photographers.” Especially since, when Wargnier called, he wasn’t sure Bee had even heard of the French brand. They reminded her she should probably iron the scarves before shooting them.

Young people with intense drive can sometimes rub other people, particularly other young people, the wrong way. “I just want to be Olivia, not Olivia the Photographer,” she says over dinner at Williamsburg’s Wythe Hotel, between telling me about the time she met Ryan McGinley at an airport (“I cried; that’s embarrassing”) and envisioning how she might redo the restaurant’s upscale, filament-bulb Brooklyn aesthetic (“I’d make all the lights pink, and I’d hang a lot of crystals from the ceiling—a fuck-ton of crystals”). Her sweater also happens to be pink, tasseled, and vintage. It matches her pinkish hair and lipstick and her Etsy-sourced collar, which has the name JUSTIN written in rhinestones across the neck. “This applies to Justin Bieber and Justin Timberlake,” she says.

She can talk about her photography career with “close friends, obviously, but sometimes people are like, ‘You already know what you want to do,’ ” using ambition as an insult. Some people loved the images so much that they tried to imitate her, posting photos with her name attached. (“The ones that I’m tagged in? They’re never very good.”) Others accused her of having “really rich parents or, like, tons of money,” even though her mom is a part-time hairdresser and her father works in IT. “Her photos resonate because they’re honest,” says Tavi Gevinson, the 16-year-old editor of Rookie, who has hired Bee and posed for her. “It doesn’t feel like she’s trying too hard to create a certain image.”

Despite her widening appeal, Bee is still a novelty—a bright young thing shooting other bright young things. “Everyone would like to be young forever, and I hope she keeps that,” Wargnier says. But to become more than the fashion world’s latest underage ingenue—like models, actors, or Zac Posen—she has to determine what her work looks like as an adult. Which is why, last Christmas, when her father framed an e-mail she had received, it was the perfect present. A month earlier, she had interviewed the photographer Joel Meyerowitz for Vice, and he wrote her afterward:

The trouble with photographs today is that they are so easy to make and share, so seductive, so representative of our lives at any given moments (friends, the crazy things they do, drugs, risks, sex, school, parties, girlfriends, boys, on and on) and you definitely have an eye! But when does it go beyond the merely seductive and dreamy stage? Only you can answer that question whenever you are ready. I bet in a year your photographs will be totally different.

I ask if Bee agrees. “Totally,” she says. “I mean, it’ll still be me. But it will be different. Yeah, totally.”

*This article originally appeared in the February 18, 2013 issue of New York Magazine.

At 14: Bee’s back, which she painted herself.

At 16: Commissioned for a Converse campaign. 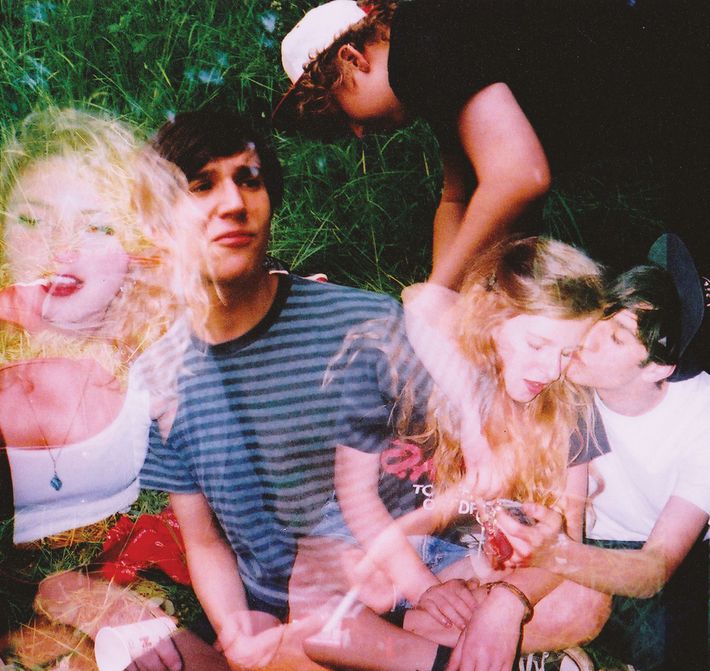 At 17: A self-portrait titled “Purple Haze.”

At 18: For Hermès’s house magazine.

At 18: For Hermès’s house magazine.

power 4 mins ago
This Congressional Candidate Gave Birth On-camera “It’s important for folks to see how pregnancy and birth is a medical event that occurs in a hospital with doctors,” says Louisiana’s Katie Darling.
style 10:00 a.m.
Gigi Hadid Called Out Ye for ‘Bullying’ After His YZY Show Ye went after Vogue contributing editor Gabriella Karefa-Johnson on Instagram after she disapproved of his “White Lives Matter” shirt.
pfw spring 2023 Yesterday at 5:30 p.m.
A Comedy of Errors at Paris Fashion Week This has been an utterly ridiculous Paris season, in the best and worst sense. And it’s not over yet.
By Cathy Horyn
fashion Yesterday at 5:29 p.m.
How Bella Hadid’s Spray-on Dress Was Made We were just as confused. So we found out.
celebrity Yesterday at 5:04 p.m.
Angelina Jolie Claims Brad Pitt Choked One of Their Children In her countersuit against Pitt, Jolie also alleged he poured beer on her and their children during the 2016 plane incident.
power Yesterday at 4:24 p.m.
‘Pro-Life’ Candidate Denies Report That He Paid for an Abortion Herschel Walker’s own son denounced him after an alleged ex-girlfriend told the Daily Beast that Walker had paid for her abortion.
always shopping Yesterday at 3:30 p.m.
12 Best Pairs of Leggings for Running in the Winter We spoke with runners to round up the warmest leggings so you don’t have to.
blackpink Yesterday at 3:01 p.m.
What’s Going on With BLACKPINK’s Leaked-Photo Drama? Everything to know about Jennie and V’s photo leak.
always shopping Yesterday at 2:30 p.m.
The Cut Shop’s Favorite Black Boots The kind you can wear every day.
divorce rumors Yesterday at 2:22 p.m.
Gisele Bündchen and Tom Brady May Be Over for Good A new report claims Bündchen and Brady have hired divorce attorneys.
breakout Yesterday at 2:00 p.m.
Paulina Alexis Doesn’t Care If You Think She’s ‘Too Rez’ The Reservation Dogs actress won’t let anything — or anyone — get in her way.
By Simon Moya-Smith
ask a boss Yesterday at 12:00 p.m.
‘How Do I Say No to Administrative Tasks That Aren’t My Responsibility?’ Once you start doing them it can be hard to stop, because you become the person with the track record of doing them well.
q&a Yesterday at 11:57 a.m.
Lio Tipton Is Still Processing The A Friend of the Family actor breaks down their approach to the true-crime genre.
rip Yesterday at 11:08 a.m.
Loretta Lynn, Country Legend, Dead at 90 Her raw and feminist country songs influenced generations of performers.
culture Yesterday at 10:15 a.m.
Where Did Don’t Worry Darling Go Wrong? Hollywood feminism strikes again.
first person Yesterday at 9:00 a.m.
Easy Target I was harassed and assaulted in broad daylight. Would bystanders have intervened if I was white?
By Vanessa A. Bee
"try everything" — shakira Yesterday at 8:50 a.m.
Bye, Guy In their first video as an official trio, the Try Guys say they were just as shocked by Ned Fulmer’s behavior as you were.
cut covers Yesterday at 8:00 a.m.
The Pain and Glory of Cori Bush In less than two years, the congresswoman built a base of power in D.C. by wearing her hardships on her sleeve.
By Rita Omokha
wtf Oct. 3, 2022
Everything We Know About Kanye West’s Harmful YZY 9 Show At his YZY 9 show, West printed on shirts a slogan used by white-supremacist groups.
review Oct. 3, 2022
Balenciaga Says, ‘Here’s Mud in Your Eye’ Demna toasts the wild and real.
By Cathy Horyn
More Stories