On Sunday night, millions of people will turn on their TVs to see members of the film industry honored for their craft what all the stars are wearing to the Oscars. By the time the ladies in the Best Actress categories have walked the red carpets at the Golden Globes, SAGs, and BAFTAs, the gown bar has been set very high. Jennifer Lawrence has already worn a trio of magnificent Christian Dior Couture numbers, Helen Hunt has shown up in two very sparkly dresses, and Amy Adams has looked radiant in two variations of lace. But these gowns are like very expensive breadcrumbs, leaving a sartorial trail that could give us a hint of what is to come. Anne Hathaway has worn Burberry, Giambattista Valli, and Chanel, is it finally time to go with her good friend, Valentino? Jessica Chastain’s choices have all had an old Hollywood-feel, so fingers crossed for some sparkle? And then there are of course the wild cards, Emmanuelle Riva and Quvenzhané Wallis, who haven’t made appearances at these big events, what can we expect from them? Take a look back at what the nominees for Best Supporting Actress and Best Actress have worn so far this awards season, and start placing your bets. 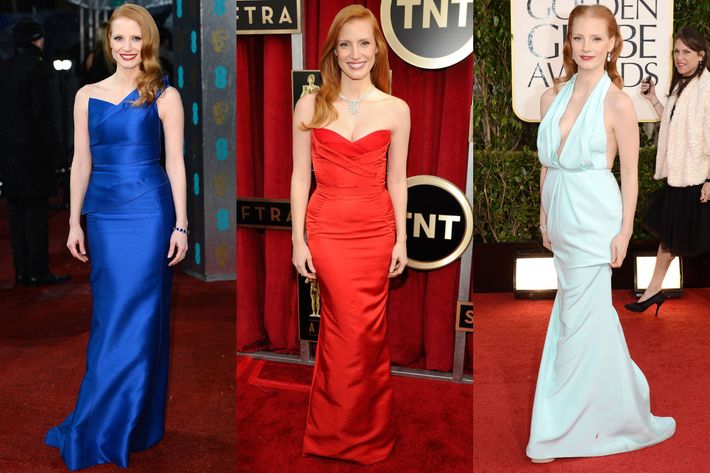 In Roland Mouret at the BAFTAs, Alexander McQueen at the SAG Awards, and Calvin Klein at the Golden Globes. 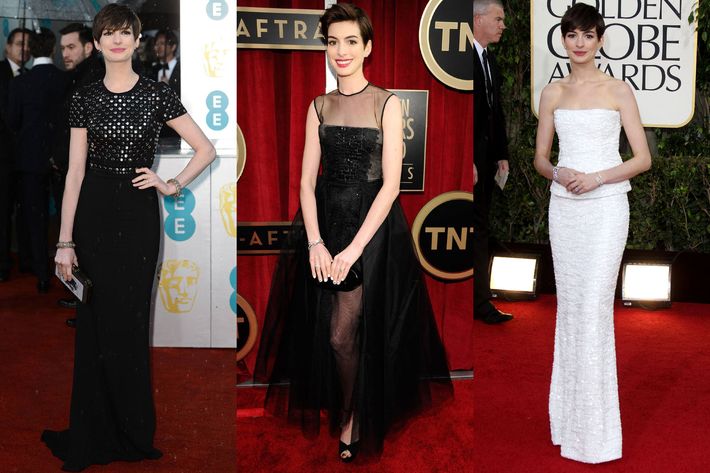 Wearing Burberry at the BAFTAs, Giambattista Valli at the SAG Awards, and Chanel at the Golden Globes. 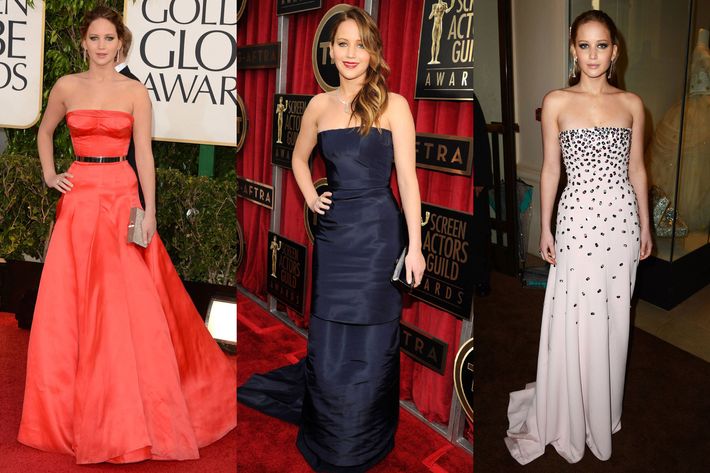 In Christian Dior Couture at the Golden Globes, SAG Awards, and BAFTAs. 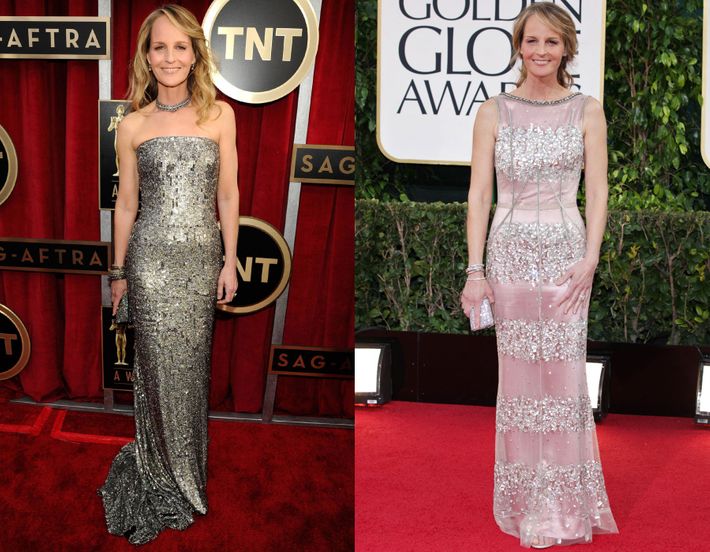 In Romona Keveza at the SAG Awards and Dolce & Gabbana at the Golden Globes. 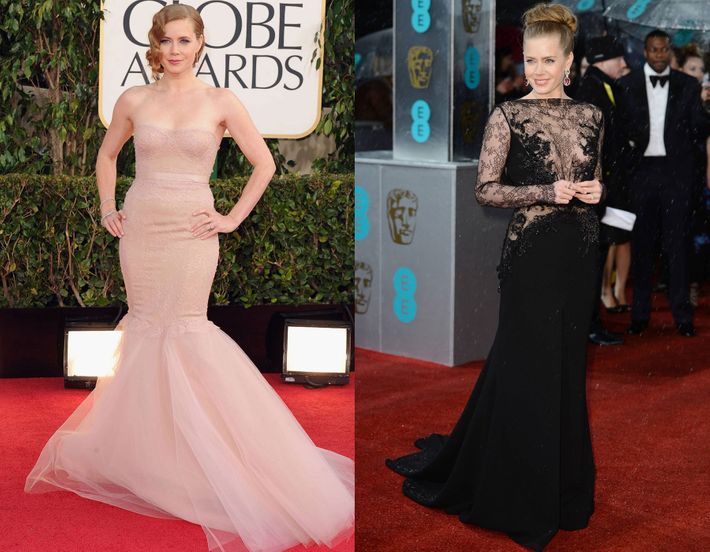 In Marchesa at the Golden Globes and Elie Saab at the BAFTAs. 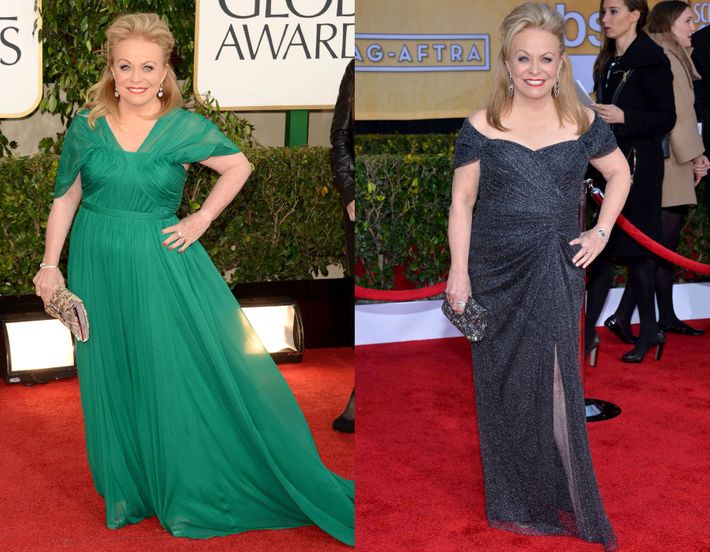 In Pamella Roland at the Golden Globes and Tadashi Shoji at the SAG awards. 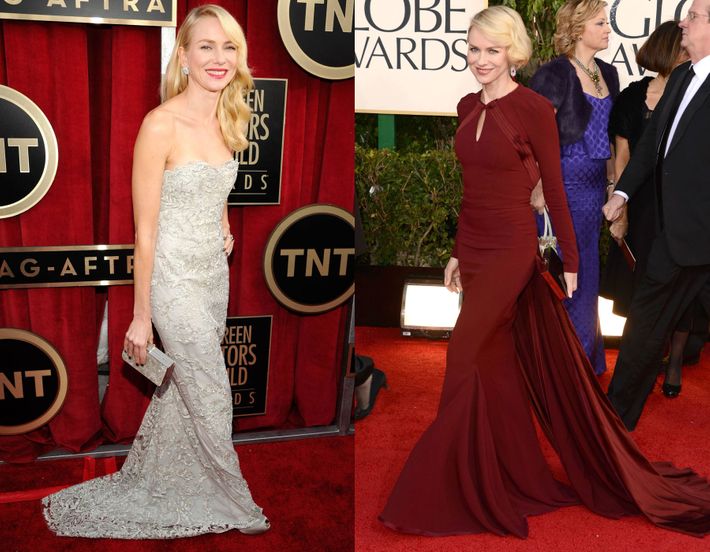 In Marchesa at the SAG Awards and Zac Posen at the Golden Globes. 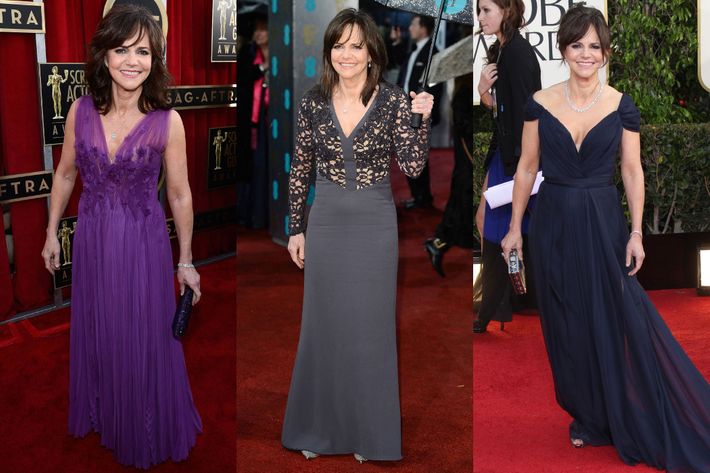 In J. Mendel at the SAG Awards, Antonio Berardi at the BAFTAs, and Alberta Ferretti at the Golden Globes. 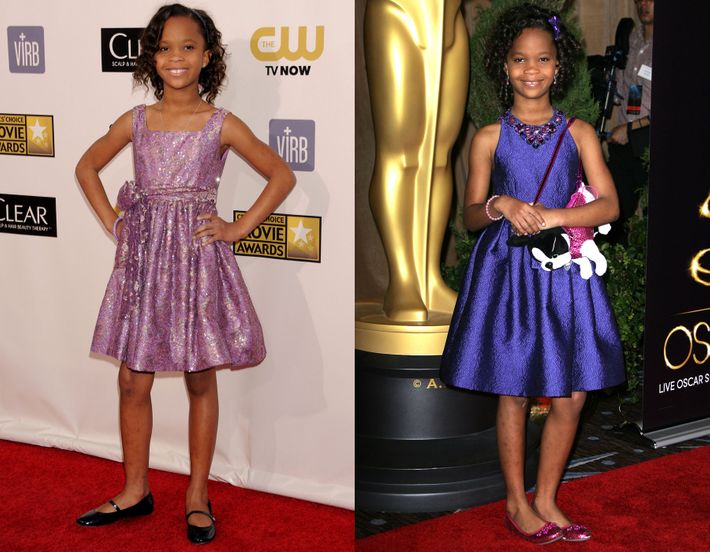 Since Wallis hasn’t been at the Globes, SAGs, or BAFTAs, all we have to go on are the sweet purple dresses she chose for the Critics’ Choice Movie Awards and Academy Awards Nominees Luncheon.

Since Riva hasn’t appeared on a red carpet yet this season, she’s just one big question mark!

love and war 12:00 p.m.
I Will Never Share a Bank Account With My Husband I’ll give up my name, but never my financial independence.
By Christina Wyman
lawsuits 11:20 a.m.
Brad Pitt Settles Lawsuit Over Defective New Orleans Homes Residents of the shoddy houses his foundation built after Hurricane Katrina will receive $20.5 million for repairs.
extremely online 11:00 a.m.
I Can’t Shut Up About The Tyra Banks Show Her daytime talk show remains her most deranged masterpiece.
parenting 11:00 a.m.
The Unbearable Heaviness of Being an ‘Old Mom’ At 39, every physical ache, every existential spiral, every scroll past young momfluencer content makes me obsess over the time left.
By Amil Niazi
crime 11:00 a.m.
What to Know About R. Kelly’s Latest Sex-Abuse Trial The woman at the center of the singer’s 2008 trial testified that he sexually abused her on video when she was 14.
power 10:57 a.m.
Critics Scandalized Finnish Prime Minister Has a Social Life The 36-year-old leader is once again facing criticism for partying.
totally kind of hot 10:17 a.m.
I’m Horny For Nathan Fielder While critics have been busy dissecting The Rehearsal, I’ve simply been turned on.
style 10:00 a.m.
H&M Is Being Sued for Greenwashing. Why? Sustainability as a marketing tactic could go extinct. And maybe it should.
5 questions with... 9:07 a.m.
Sharon Horgan Wants to Get Out of Her Comfort Zone The Bad Sisters creator and star can’t help but try to do it all.
sustainability 8:00 a.m.
Where to Sell Secondhand Clothing: A Guide It’s not the RealReal.
life after roe 7:00 a.m.
The Abortion Clinics Staying Open in Hostile States Some providers are pivoting to offer gender-affirming care, birth services, and other aid patients won’t get at crisis-pregnancy centers.
¡hola papi! 6:00 a.m.
‘My Average Life Is Smothering Me’ You don’t need to blow the whole thing up. You just need a pressure valve.
By J.P. Brammer
celebrity Yesterday at 5:41 p.m.
We Support the Statement Thong Thank you to Doja Cat for championing this look.
sexual misconduct Yesterday at 4:19 p.m.
Deshaun Watson Suspended Over Sexual-Misconduct Allegations Following an appeal, the quarterback was fined $5 million to be donated to organizations that prevent sexual assault.
but why tho Yesterday at 4:03 p.m.
Kourtney Kardashian Really Loves a Bathroom Photo Shoot Her latest photo dump includes way too many urinals.
wait what is happening on tiktok? Yesterday at 4:00 p.m.
The Kids Are Stealing Cars on TikTok Now Meet the “Kia Boyz.”
model behavior Yesterday at 1:59 p.m.
Linda Evangelista Returns to Modeling in British Vogue The model posed for her first major fashion cover since revealing she was permanently disfigured from CoolSculpting.
collaboration station Yesterday at 12:47 p.m.
Welcome to the Inside of Ye’s Mind. He’s Making ‘No Apologies.’ Yeezy x Gap’s Times Square takeover.
marriage Yesterday at 12:41 p.m.
The World Will Soon Have Two Taylor Lautners The Twilight star says his fiancée, also named Taylor, will take his last name.
life after roe Yesterday at 12:39 p.m.
What Abortion Actually Looks Like Two doulas set out to demystify the process by documenting their clients’ experiences.
By Megan Paetzhold
More Stories