A New York Times article about NYC mayoral candidate Christine Quinn drew accusations of sexism today. A portrait of the candidate’s “stormy temperament,” the article depicts Quinn screaming at subordinates and delivering a ten-minute rant that contains twenty F-bombs. She appears to be “bragging” about her ability to “open up the bitch tap and let the water run.” Castration is a favorite threat:

She has threatened, repeatedly, to slice off the private parts of those who cross her.

In strategy sessions, Ms. Quinn can speak colorfully of other lawmakers, often saying, “I’m going to cut his balls off.”

Now, if a male lawmaker referred repeatedly to castration, I admit that I might roll my eyes. But Christine Quinn is different: If she wins the election, she’ll not only be New York’s first female mayor, but its first lesbian one. And yet she is utterly unafraid of sexist reactions to powerful women, gleefully tossing emasculation anxiety in the faces of those who oppose her. In a world where Hillary Clinton nutcrackers still sell out, that’s an astonishing level of defiance. Quinn tried to play down her aggressiveness by telling the Times she also threatens to castrate women, which actually seems more offensive — at least threatening to castrate a man doesn’t call into question which gender he belonged to in the first place.

The occasional four-letter word has humanized some politicians. When Mayor Bloomberg asked, “Who wrote this shit?” in the middle of a pun-heavy speech at the Coney Island hot-dog-eating contest last year, “it elicited the loudest laugh of the day.” Embracing President Obama as he signed health-care reform into law, Joe Biden murmured into a hot mike, “This is a big fucking deal.” By Twitter, the White House press secretary endorsed the statement. Even those prone to cursing in rage have played it to their favor. After telling Senator Patrick Leahy to “fuck off” on the Senate floor, Dick Cheney said some peers “felt that what I’d said badly needed to be said, that it was long overdue.” The spontaneous insult was “sort of the best thing I ever did,” he has said. Chicago Mayor Rahm Emanuel’s hotheadedness, meanwhile, borders on the folk-heroic.

But they were all men. We might expect the potentially groundbreaking Quinn to tread gingerly around the subject of gender, much as Barack Obama avoided playing up his race in 2008. Yet Quinn’s verbal attacks seem especially gender-charged — casting herself as a bitch and her opponents as men in need of de-sexing. Even when she expresses regret, it’s in the context of femininity: “Sometimes I yell, sometimes I raise my voice,” she told the Times. “I am trying to do it less, because it’s not always attractive. It’s not always the right thing to do.” I’d like to know how long the pause between those last two sentences was, because Quinn’s contrition doesn’t sound totally sincere.

Quinn maintains voters won’t care about her aggressiveness: “I don’t think being pushy or bitchy or tough, or however you want to characterize it, is a bad thing. New Yorkers want somebody who’s going to get things done.” As Tina Fey said during Hillary Clinton’s primary race, “Bitches get stuff done.” But there’s another reason Quinn’s foul mouth works in her favor: She has the balls to talk that way. 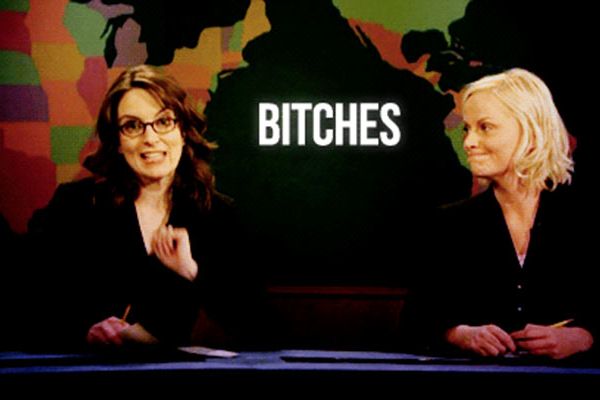