In a bold step toward remedying the world’s least pressing health issue, the FDA recently approved an over-the-counter topical spray to treat premature ejaculation. (Similar products have long been available, but this is the first to win FDA approval.) Manufactured by Absorption Pharmaceuticals, Promescent’s active ingredient is lidocaine, a local anesthetic you have probably encountered at the dentist. Promescent’s website boasts that it “benefits both men and women by helping a man have staying power.” Become an endurance champion through the magic of a medically deadened penis, I thought. Okay! I’ll try it!

First, a bit about me: Aside from the occasional “warning shot” fired on account of new partner jitters, premature ejaculation is not a chronic problem. Still, when I heard of Promescent, it seemed too ridiculous a journalistic opportunity to pass up. Little did I know that the product would nearly ruin my life.

Things began as hilariously as I expected. By phone, Absorption Pharmaceuticals CEO Jeff Abraham confirmed my hunch that most users are in long-term relationships — probably because pulling out a canister and spraying chemical graffiti on the side of your dong is difficult to explain to a stranger. Still, Abraham notes, 30 percent of Promescent aficionados are single guys who use it recreationally.

Even excessive Promescent use would not cause long-term damage, Abraham assured. After a ten-minute wait, my penis was supposed to fully absorb the lidocaine solution, which would not “transfer” to my partner and make sex a mutually unenjoyable slog. (Though the key ingredients don’t rub off on women, that hasn’t stopped the brand from advertising to both sexes equally. “Women talk about sex. Men don’t,” Abraham says. “These things tend to go viral with women.”) And even if I thought he should have chosen a word other than viral, I could see his point. 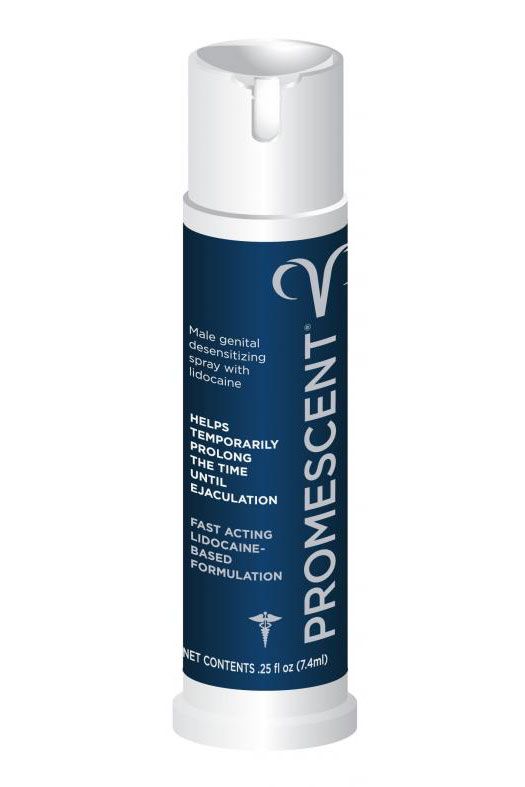 After acquiring three vials of Promescent, I went out to drinks with a young woman with whom I’d been on a couple dates but had not yet slept with. I told Carolyn about my goal of numbing my penis and seeing how long I could “punish” a woman. With the eager nervousness of a premature ejaculator, I awaited her response.

“That’s funny,” she replied. Then, after she downed several more beers, she revisited the topic. “Wait, are you just trying to have sex with me for your article?”

“No,” I protested. “There are so many other reasons I’m trying to have sex with you!”

As Carolyn quite reasonably shot me down, I noted the irony of being driven apart by a substance designed to keep couples together. Merely proposing the use of Promescent to a potential sex partner had diminished the likelihood that I would ever have sex with her.

“Fine. I’ll take care of this myself,” the whiskey made me say. It was perhaps the most self-righteous way a man has ever described jerking off.

The next day, I decided to test Promescent on my own. I started by spritzing six quick squirts on each wrist and rubbing them together like I was applying perfume. It had a new car smell. The texture had a gummy feel, like an anti-lube. After four minutes, my wrists began to tingle and feel flimsier than usual. To test whether I’d lost any torque, I opened a pasta-sauce jar, which actually wasn’t that difficult, so I wondered if the spray was a sham. There was only one way to find out, and I couldn’t justify putting it off any longer: It was time to beat my (frozen) meat.

I locked myself in my bedroom with my laptop and my penis anesthetic. The instructions directed me to use no fewer than three squirts and “NO MORE THAN TEN.” (Emphasis my own.) I really wanted to “go to eleven,” just for the joke, but I was too afraid of ruining my penis forever over a Spinal Tap reference.

So there I was, hard as the problem of solving the federal deficit, when I applied ten spritzes of lidocaine solution. Male readers: You know that feeling when you walk into the ocean? A petrifying chill that draws goosebumps from every pore and has the inverse effect on your penis? This was like spraying a body of frigid sea water directly onto my junk. Even without any orgasm-delaying benefits, they could market this stuff as “Boner-B-Gone” to high-school guys who need to make presentations in front of the class.

I then spent the ten-minute “waiting period” uncomfortably checking my e-mail. Finally, after fifteen or so years as an amateur, I was ready to become a professional masturbator. Unfortunately, I’d been overzealous with the Promescent. I could barely muster the kind of erection you might get after several tumblers of hard alcohol. The problem wasn’t numbness so much as anhedonia of the genitals. Masturbating felt like listening to a Phish song; I was ten minutes in with no end in sight, just a lot of aimless noodling. After twenty fruitless minutes, I gave up, limp from exhaustion and local anesthesia.

The next day, I got “back to work” using only three spritzes. Though it diminished the sexual sensation, the lower dose made pleasuring myself feel less like a Sisyphean chore and more like eating the last piece of pizza just because it’s there. After eleven minutes, I finally finished my pizza. I’d call it a “climax” in the same way that crossing “wash dishes” off your to-do list is the “climax” of washing dishes.

Would actual sex be this bad? Or would a woman make Promescent a bit more tolerable? To answer that question, I would have to broach the subject with Carolyn; I didn’t want to test the product on a random, because I was actually trying to start a relationship with her.

I spent the next three weeks worrying and stalling, but also (mercifully) having regular, fully sensational sex. After nearly a month, I got the nerve to bring up my mission again. Carolyn smiled. “Of course we can do that,” she said immediately. “I just thought it was weird and kind of gross that you brought it up before our first time.”

The next time we had sex, I fired off three squirts of Promescent. Maybe I felt a little less than usual. It was hard to tell. I mostly spent the entirety of the experience inside my own head, which, as we all know, is the best way to not enjoy something at all. I don’t know whether it was nerves or what, but the intercourse was probably slightly shorter than usual. I didn’t care, such was my relief at finally completing my mission.

For the sake of research, we tried once more. This time I doused myself as if it were bug spray and my penis was on a journey through the rain forest. Once again, I’d overdone it. It was the most nerve-racking, cerebral sex since I lost my virginity. Thanks to the double-bagging (technical term) effect of liquid-condom sensation and actual condom, I felt next to nothing. Well, that’s not entirely the case. With my brain free from experiencing pleasure, I became acutely aware of how sweaty I was.

Yes, Carolyn and I are still together. Through communication and honesty, I was able to navigate through the delicate treatment of a sexual dysfunction I don’t have. More to the point, the spray did exactly what it promised. If you or a man you know is a quick draw and doesn’t want to be, Promescent will probably help, but finding the correct dosage — something I never determined — is crucial. I don’t think that was the point, though. In the end, I didn’t need to be the Punisher to a woman. My own anxiety was punishment enough.