Beyoncé commenced her Mrs. Carter world tour in Belgrade, Serbia, last night with the plethora of spandex, fishnet tights, and sequins you knew to expect. Even though we’ve seen different iterations of the same glittery bodysuit on her a million times, it never gets old, does it? But Beyoncé has a propensity for fun wardrobe surprises — at the Super Bowl, she ripped off her lace skirt and flung it into the audience — and this time her big “ooh” moment took the form of a sequined leotard with trompe l’oeil abs and breasts, complete with sparkly golden nipples. Ahhh. Just when we thought we’d seen all of Beyoncé, we get to see … an anatomically correct version of her nude torso, rendered in metallic embellishments! The same outfit had beaded fringe at the bottom that flew around when she shook her butt. It was very dramatic.

The confirmed designers behind the Mrs. Carter world tour include Julien Macdonald, Dsquared2, and Pucci, but so far it’s unclear who designed which look. What’s more, there may be some Givenchy in the mix! Which makes sense, considering Bey and Riccardo Tisci are old pals, and they’re co-chairing the Met Gala together this year. Click through our slideshow and be dazzled. 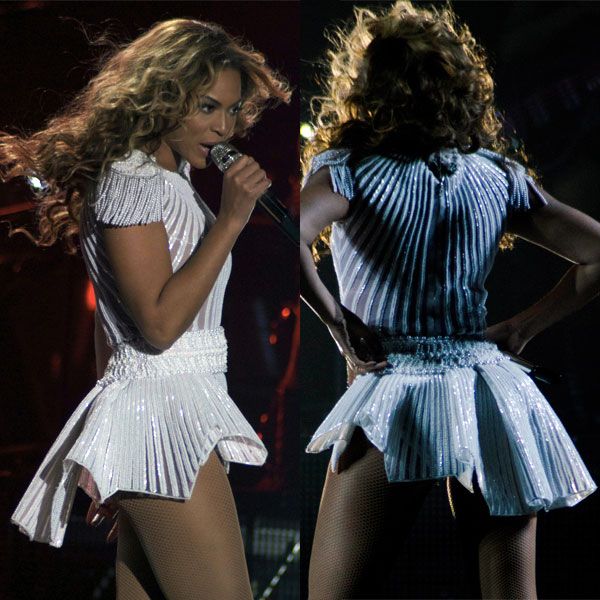 Note the white epaulets! And although that skirt resembles a lampshade for her butt, it looks like a nice lampshade. Designer Ralph & Russo says it’s embellished with crystals and pearls. 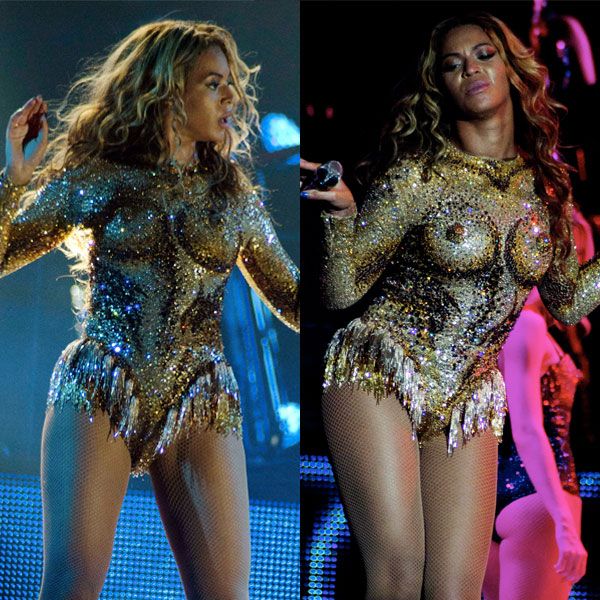 As if Michaelangelo sculpted her from sequins. Update: This outfit, by the Blonds, was inspired by a Tamara de Lempicka painting. 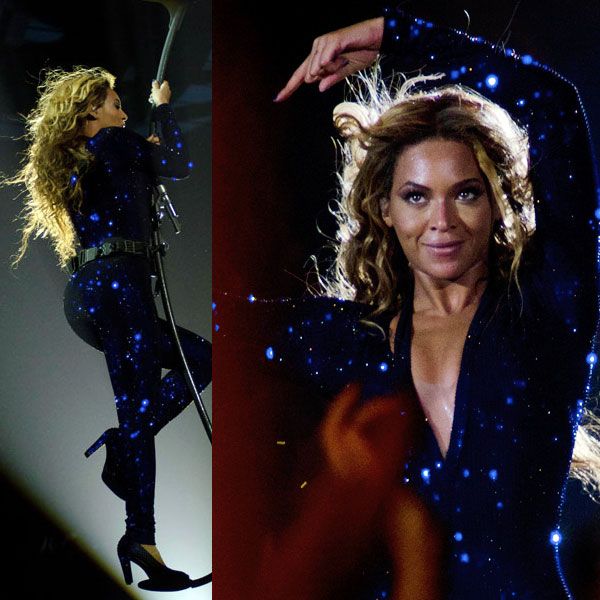 Does the world need another picture of Beyoncé descending from the ceiling in a glittering, full-body spandex bodysuit with a plunging neckline? IS THAT EVEN A QUESTION? Update: This was designed by Vrettos Vrettakos and Dennis Kolpodinos.

A personal favorite. The golden cleavage-tassel is mesmerizing, and the flowy skirt adds extra drama to her stomping. Update: It’s designed by Alon Livne.

Even Beyoncé needs to cover up sometimes. This jacket-and-thigh-high combo is by Pucci designer Peter Dundas. 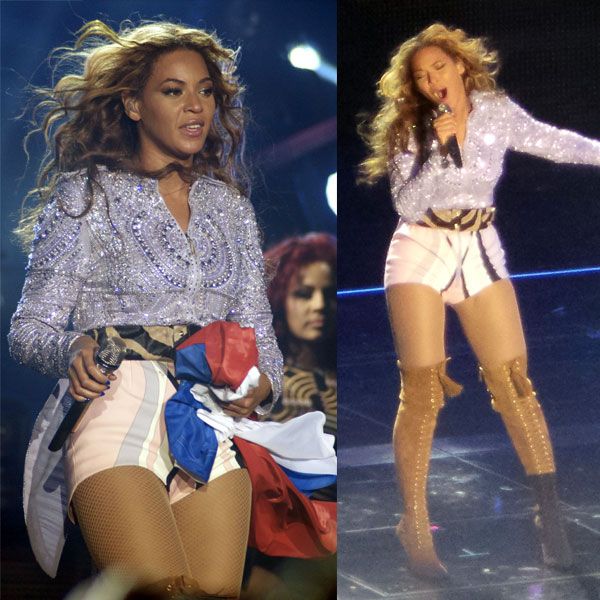 Another Pucci number, with a clear “X” over her crotch. In case you don’t know where to look, check out those suede lace-up boots with the knee tassels.

This sparkly hat has cat ears, like the headwear at Givenchy’s fall 2011 runway show. The stars around her collarbone are a nice touch, and also reminiscent of Givenchy designs. Update: Givenchy’s Riccardo Tisci, Bey’s Met Gala co-chair, confirmed that he did indeed make this look.

Token black sparkly leotard, also by Pucci. This one has zippered pockets, because you never know.

This, on the other hand, looks like something she’d wear out to dinner on a Tuesday. Which is something to be proud of, obviously.

valentine's day 28 mins ago
19 Nontraditional Valentine’s Day Gifts Give something unexpected this February 14.
spring fashion 12:00 p.m.
Mei Kawajiri’s Very Extreme Nails  Her completely over-the-top talons landed her features in magazines and gigs backstage for Marc Jacobs, Tom Ford, Miu Miu, and Moschino.
By Maya Allen
fashion 11:59 a.m.
Do Not Show Up Late to the Marc Jacobs Show Lourdes Leon was apparently denied entry for arriving after the doors closed.
keeping up with the royals 10:53 a.m.
Will Harry and Meghan Get to Go to the Coronation? Sources suspect they’ll be invited; whether or not they accept is another question.
q & a 10:00 a.m.
Rachel Bilson Has Some Notes for The Bachelor The Accused actress and podcast host also talked about reuniting with her O.C. co-star Mischa Barton.
a choice? 10:00 a.m.
What Is Going On With Austin Butler’s Voice? I fear he may be stuck talking like Elvis forever.
extremely online 9:40 a.m.
I Can’t Shut Up About About Nancy Pelosi’s Hot-Dog Diet The former House Speaker also endorses ice cream for breakfast.
spring fashion 8:00 a.m.
The Woman Who Became McQueen The quiet ascendance of Sarah Burton.
By Cathy Horyn
culture 8:00 a.m.
This Is Pamela, Finally The model-actress’s memoir and documentary reveal only what she wants us to know. It’s about time.
By Roxane Gay
the wedding files 7:00 a.m.
At Georgia O’Keeffe’s Ghost Ranch, an ‘Epic’ Wedding No speeches, just dancing.
By Kaitlin Menza
¡hola papi! 6:00 a.m.
‘I Feel Abandoned by My Friend’ Hopefully the two of you can have a productive conversation that leaves you both in a healthier place.
By J.P. Brammer
power Yesterday at 9:16 p.m.
Dave Portnoy Has Dropped His Lawsuit Against Insider The Barstool Sports founder filed suit last year in response to allegations he filmed women without consent during sex.
culture Yesterday at 8:14 p.m.
Ellen DeGeneres Still Has a Lot of Famous Friends DeGeneres and Portia de Rossi’s vow renewal was officiated by Kris Jenner and attended by Prince Harry and Meghan Markle.
spring fashion Yesterday at 8:05 p.m.
Everyone’s Dissolving Their Pillowy Filler Faces The filler era has ended. Now, everyone’s scooping out their face.
By Sangeeta Singh-Kurtz
it's vintage Yesterday at 6:51 p.m.
How Well Do You Remember Y2K Trends? Put your millennial bona fides to the test.
and just like that Yesterday at 6:15 p.m.
What on Earth Is Happening on the Set of And Just Like That …? Aidan’s back … and smoking?
gone sale-ing Yesterday at 2:56 p.m.
10 Things You Don’t Have to Pay Full Price for This Week Some pre–Valentine’s Day shopping.
crime Yesterday at 2:25 p.m.
A German Woman Has Been Charged for Murdering Her Doppelgänger Authorities believe the crime was part of an elaborate plot to fake her own death.
power Yesterday at 2:03 p.m.
Eagles Player Indicted on Rape Charges Ahead of the Super Bowl, rookie lineman Josh Sills faces felony charges for rape and kidnapping in Ohio.
please clap Yesterday at 12:05 p.m.
Gisele Stays Winning She wishes her newly retired ex the best of luck in all his future endeavors [prayer-hands emoji].
More Stories