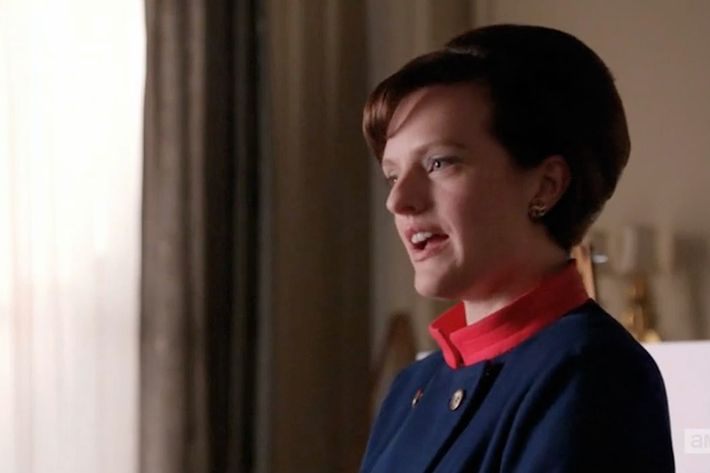 Last night, in a great coup, Peggy presents to the Heinz Ketchup account by using Don’s famous line from the episode titled “Love Among the Ruins” (Season 3, Episode 2): “If you don’t like what is being said, then change the conversation.” She delivers the line in a poised presentation to the Heinz team in a hotel room, just after Don has done a mediocre job of convincing the client of his own idea.

The betrayal cuts extra deep because Don thinks he is the only one even gunning for this account. He doesn’t know that Peggy talks all the time to her former co-creative Stan, who inadvertently tipped her off about the potential business. The mentor and his mentee meet outside in a tense moment right after SCDP has presented. Don then lingers, listening outside of the door while his former protégé masterfully explains her idea by appropriating  his own words. Coming late in an episode in which Don was a complete dick throughout, it felt like vigilante justice.

After the presentation, Peggy and her new boss Teddy Chaough go to lunch at the diner where Don, Stan, and Pete have gathered to regroup. Peggy stands up to Don’s death stares and the middle finger of her friend Stan with steely grace. If she’s uncomfortable, she’s hiding it well. In last week’s episode, when Peggy casually mentioned that she had heard Heinz was looking, Chaough pushed her to find out all she could. When she doubted if she could betray her former company, he reminded her that their biggest mistake was underestimating her. Amen.

academy awards 1:39 p.m.
Unpacking Andrea Riseborough’s Controversial Oscar Nomination Why are people so worked up about the actor’s grassroots campaign?
your next move 12:52 p.m.
‘I Hate My Cushy Job. Should I Suck It Up or Just Quit?’ The answer is right there in the question.
q&a 12:34 p.m.
Bethann Hardison Looks Back on Her Life With a New Documentary The activist and model spoke to the Cut about premiering Invisible Beauty at Sundance and why she refuses to use the term “Black excellence.”
finally 12:09 p.m.
Do I Feel Sad for Tom Brady Now? Having lost everything to football, the quarterback is finally retiring for real.
health and wellness 12:07 p.m.
Naomi Watts Wants You to Talk About Lube “What kind of Dry January have you had … Dry AF … am I right?”
marketing? 12:03 p.m.
Lingerie Ad Compares Bra to … Ryan Reynolds? Harper Wilde has pulled a truly bizarre endorsement (?) of their product.
spring fashion 12:00 p.m.
Everyone’s Dissolving Their Pillowy Filler Faces The filler era has ended. Now, everyone’s scooping out their face.
By Sangeeta Singh-Kurtz
why is your skin so good 11:47 a.m.
How This YouTube Beauty Executive Gets Her Skin So Good Chanel Tyler isn’t dubbed “the glow expert” for no reason.
beyonce 9:51 a.m.
Hope You’ve Been Saving for Beyoncé Tickets The Renaissance tour dates are finally here.
love and war 9:01 a.m.
What ‘Feminist Tinder’ Promised Bumble set out to make dating better for women. Did it deliver?
By Sangeeta Singh-Kurtz
ask a beauty editor 8:00 a.m.
‘I Love That Lipgloss Is Back, But Are There Any That Actually Last? ’ These are the longest-lasting glosses, according to experts. Follow their application tips if you want better wear.
spring fashion 8:00 a.m.
The Cool Tang of Ice Spice Visiting with New York’s princess of rap.
By Danya Issawi
celebrity Yesterday at 6:15 p.m.
Ashton Kutcher Finally Addressed Danny Masterson’s Rape Trial He hopes his That ’70s Show co-star is “found innocent of the charges brought against him.”
rust Yesterday at 4:00 p.m.
Everything We Know About the Rust Shooting Alec Baldwin and prop armorer Hannah Gutierrez-Reed have been charged with involuntary manslaughter.
spring fashion Yesterday at 3:00 p.m.
Vitamins for Virgos, Candles for Capricorns Truly everybody wants in on astrology.
obsessive tester Yesterday at 2:50 p.m.
Your Guide to the Best Tinted Moisturizers Summer is a makeup mind-set.
By Ashley Weatherford and Chinea Rodriguez
skin deep Yesterday at 2:27 p.m.
Are At-Home Beauty Devices Even Worth It? Should you microcurrent, LED, and microneedle at home?
spring fashion Yesterday at 12:00 p.m.
The Oh-So-Popular Popcorn Dress How a stretchy, nubby bodycon dress with aughts-era Limited Too vibes became the post-pandemic go-to splurge.
By Allison P. Davis
what we know Yesterday at 10:43 a.m.
A Seventh Officer Has Been Suspended After Tyre Nichols’s Death: Updates The officer was relieved of duty the same day the five officers charged with murder were fired for the beating.
celebrity babies Yesterday at 10:24 a.m.
So What Did Adam Levine and Behati Prinsloo Name Their Baby? We’d all like to know.
More Stories