My mother passed down to me dark brown hair, a love for reading, and soft, lavender under-eye pillows. Ever since high school I’ve sported dark circles under my peepers. The shade and plumpness often varies: After a sleepless Sunday night, those bags stick out like Casper covered in a red wine stain; in the summer, with a healthy tan, they’re less noticeable.

My mother, who finds it reason to celebrate when she sleeps past 6 a.m., has been dealing with her own plum rims for the past 40-plus years. With two kids, an around-the-clock job, and normal life-stress things, she could wear those under-eye bags like a red badge of courage, but instead, she goes to battle with them every day. Since she passed this genetic gift on to me, she’s always given me tips on how to deal with them, most of which are universally acknowledged truths, just delivered with her own personalized mom-ish perspective:

Salt Is the Devil
Because of that whole retaining-water thing, salt causes puffiness. When I was 13 my mother told me, in what I felt was a wriggly TMI moment, that I should avoid salt in the days leading up to my period because it causes bloating. The same truth applies to the face: After an evening of soy-sauce-doused sushi, my face, and the bags under my eyes, are noticeably puffier.

Smoking Kills Your Skin
In my mother’s eyes, the only thing worse than salt is smoking. At the age my mother is now, my grandmother, a woman who smoked nearly her entire life, looked about twenty years older than my mom does today. Smoking wrecks your skin and does terrible things to your body. Forget preaching, this was a Fact of Life instilled in my brother and me growing up.

Sleep Needs to Be a Priority
Another rather obvious tip is that more sleep equals smaller under-eye circles. But as someone who often wakes up before it’s light out, my mother isn’t shy about needing an early bedtime. You know what’s cooler than eight hours of sleep? Ten hours of sleep. When I achieve this magic number on a weekend, all traces of Lisa Frank purple seem to momentarily retreat. Such a glorious result is enough motivation to get my mother to retire around 9:30 p.m.

Fake It Till You Make It
My mom applies this motto to many things in life. She says that when she first discovered YSL’s Touche Eclat, it was like magic. Concealer is a bag-lady’s best friend: If you can’t get enough sleep every night and find yourself consuming more wine and soy sauce than water, a powerful concealer is your best friend, and worth investing in. 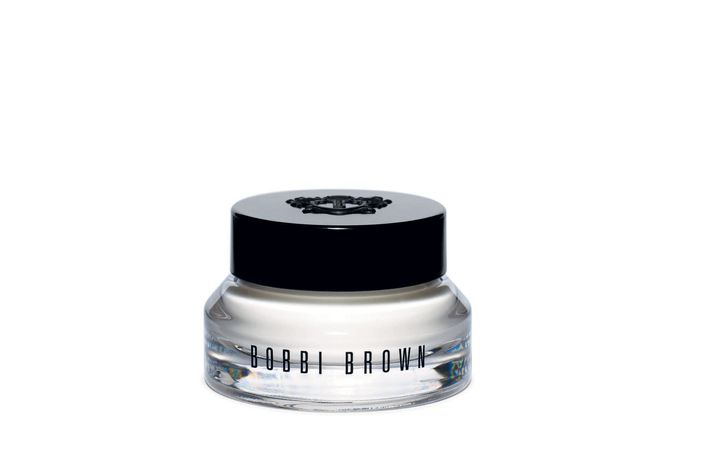 After years of being faithful to her eye-care gospel, I’m finally able to impart a little wisdom of my own to my mother. Discovering Bobbi Brown’s eye cream was my own Touche Eclat moment. Like a tush to a whoopee cushion, the cool cream immediately deflated my under-eye bags, leaving me shocked. The thin cream was like a shot of moisture to my skin, instantly brightening and soothing the eye area. The small pot is $55, which might be a great deal for a container of Harry Potter–level magic, but doesn’t exactly translate to a daily use kind of thing in my budget. So for my normal routine, I’m sticking with good old moisturizer and my mom-approved tips. On days when I’m looking particularly puffy and blue, I’ll dip into my Bobbi Brown reserve. As for my mom, this might just give her a reason to stay up to watch an entire episode of Mad Men.

What I Inherited From My Mother: Under-Eye Bags

sure why not 27 mins ago
What Is Johnny Depp’s Deal With Alpacas? They keep coming up in the actor’s defamation trial, but … why?
why 1:35 p.m.
Ted Cruz Is Curious How Pete Davidson Gets These ‘Hot Women’ He posed the question during a podcast segment about “toxic femininity.”
parties! 1:29 p.m.
The Bestest Party Looks of the Week  Harry Styles > everyone!

pda 12:50 p.m.
Chrishell Stause and G Flip Can’t Keep Their Hands Off Each Other Even at the airport.
baby formula shortage 12:47 p.m.
How to Find Baby Formula Right Now And what you can do to help caregivers who need it.
the internet 12:30 p.m.
The Anti-Instagram App Promising to Make Us Feel Good BeReal wants to capitalize off our desire for authenticity on social media.
By Michelle Santiago Cortés
obsessions 12:01 p.m.
I Can’t Shut Up About Everything Everywhere All at Once And neither can Jamie Lee Curtis.
power 11:50 a.m.
Elon Musk Has Been Accused of Sexual Misconduct A new report claims SpaceX paid a $250,000 settlement to an employee who alleged he propositioned her.
celebrity 9:46 a.m.
How Many Weddings Is Too Many? Kourtney Kardashian and Travis Barker are reportedly getting married again in Italy this weekend.
sex 9:00 a.m.
Can Latex Panties Become As Popular As Condoms? The FDA has cleared a sexier alternative to dental dams. But will people actually use it?
supply and demand 8:00 a.m.
We Buy Baby Formula! A long-running black market bursts into the open.
zodiac seasons 7:00 a.m.
Your Guide to Gemini Season Gemini season is a time for fresh air and sparkling light, for ideas and conversation.
By Claire Comstock-Gay
¡hola papi! 6:00 a.m.
‘Daddy Kinks Make Me Uncomfortable. Am I Missing Something?’ If it’s not something you’re into, and it’s between two consenting adults, then I don’t see why it’s your business.
By J.P. Brammer
lawsuits Yesterday at 5:00 p.m.
Ellen Barkin Recalls Johnny Depp As ‘Jealous’ and ‘Controlling’ And more testimony from the Amber Heard v. Johnny Depp case.
father's day Yesterday at 4:10 p.m.
The Best Gifts for Dad (That Do Good, Too) One gadget provides clean drinking water to a child for an entire school year.
engagements Yesterday at 3:47 p.m.
AOC and Riley Roberts Are Engaged For once, some good political news.
power Yesterday at 3:24 p.m.
States Are Scrambling to Restrict Abortion Access With the Supreme Court expected to rewrite abortion rights, conservative states are advancing increasingly extreme bans.
are u coming? Yesterday at 2:45 p.m.
Rockin’ Out With the Mayor and ‘Late-Night Dorinda’ at the New Hard Rock Hotel Don’t expect Sid and Nancy; it’s pretty swanky.
law & order Yesterday at 2:07 p.m.
Would You Go to Anna Delvey for Legal Help? The infamous scammer claims she’s starting a law firm.
celebrity Yesterday at 2:02 p.m.
Rihanna Reportedly Had Her Baby According to TMZ, she gave birth to a baby boy.
More Stories