Jennifer Lopez is feeling the heat this week for singing “Happy Birthday” to the authoritarian ruler of Turkmenistan. The former Soviet state is considered “one of the world’s most repressive countries”; it once shut down the entire Internet in order to stop a video of its president falling off a horse from disseminating. Lopez’s publicist has said the party was a corporate event put on by China National Petroleum for its executives in oil-rich Turkmenistan — it just happened to fall on the president’s birthday — and Lopez never would have attended “had there been knowledge of human right issues of any kind.”

Naive as it sounds, we’re inclined to believe it. Say what you will about Dennis Rodman schmoozing with Kim Jong-un or Naomi Campbell accepting “dirty-looking stones” from Charles Taylor. Who among us could have picked Turkmen president Gurbanguly Berdymukhamedov out of a lineup? Let alone named his human rights abuses?

Nor is J.Lo the first pop star to sing before googling, unwittingly bringing international human rights abuses to the attention of the Us Weekly crowd. From Sting to 50 Cent, the music industry’s free speech beneficiaries are the preferred American and British export of cash-flush dictators everywhere. Rather than pile on this Fourth of July weekend, discover what pop stars can teach you about repressive states the world over. 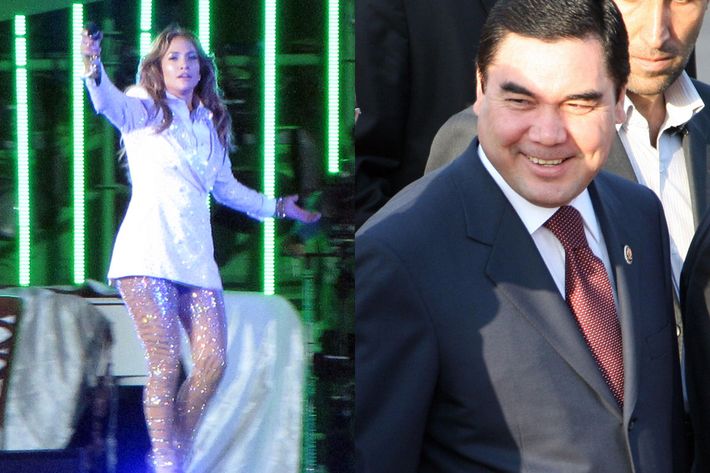 Criminal ties: Lopez’s birthday wish for Gurbanguly Berdymukhamedov is not the singer’s first brush with dicey world politics. In 2010, J.Lo reportedly canceled a $3 million birthday show in Turkish-occupied northern Cyprus after it drew protests from displaced Greek Cypriots. Forgiven? Too soon to say. Although Lopez’s publicist said she would not have knowingly performed, what will become of $1.5 million in repression-and-oil money?

Criminal ties: In 2011, diplomatic cables obtained by Wikileaks confirmed previous reports that Beyoncé (along with Usher, 50 Cent, and Mariah Carey) had been paid up to $1 million to perform at parties thrown by Muammar Qaddafi’s sons Hannibal (pictured) and Mutassim in Italy and St. Barths between 2005 and 2009. Forgiven? Entirely. Through a spokesperson, Beyoncé said that she donated her fee to earthquake relief in Haiti. Usher, 50 Cent, and Carey made similar pledges.

Criminal ties: As reports about Beyoncé’s show rolled out, Nelly Furtado piped up on Twitter, confessing to also having been paid $1 million by the Qaddafi clan, to perform in an Italy hotel in 2007, and pledging to donate the money to an unspecified organization. Forgiven? Mostly forgotten.

Criminal ties: After being acquitted of ten felony charges (including several counts of child molestation) in 2005, Jackson took refuge in Bahrain, befriending Sheik Abdullah bin Hamad al-Khalifa and, according to a lawsuit later filed by the prince, taking his money in exchange for a never-recorded album and a promised in-palace musical production. Forgiven? By the time Jackson and the prince settled out of court in 2008, Jackson’s ties to the heir to an oppressive regime were, tragically, the least of our concerns.

Criminal ties: In 2006, the Qaddafi clan brought Lionel Richie to Libya to perform at a celebration marking the twentieth anniversary of a U.S. attack on Tripoli and Benghazi, staged in front of the dictator’s bombed-out compound, which had been preserved as a memorial. He was toasted by Aisha Qaddafi, who was rumored to have gotten married around the same time. Forgiven? Warily. Richie has never publicly addressed the concert, and his slight resemblance to Muammar makes the connection hard to forget.

Criminal ties: In defiance of a United Nations boycott, Queen played a string of shows at Sun City, a casino resort in one of the black states of apartheid South Africa. This was in 1984, while Nelson Mandela (pictured) was still imprisoned and amid international divestment. Forgiven? Kind of. A protest song, “Sun City,” featuring Bruce Springsteen, Keith Richards, Run DMC, Bob Dylan, George Clinton, and Joey Ramone, among others, made the group’s decision look even worse. But almost everyone had forgotten it after the group’s Live Aid performance the next year. 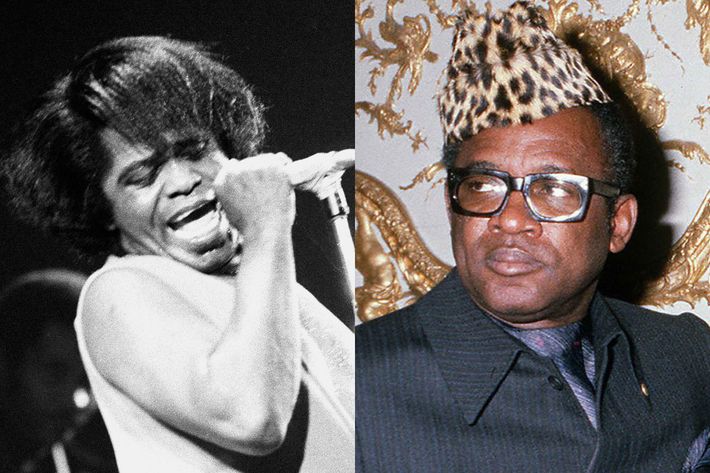 Criminal ties: Along with B.B. King, Celia Cruz, and many more, Brown performed at a 1974 festival organized to authenticate military dictator Mobutu Sese Seko’s recently founded Zaire (now the Democratic Republic of Congo), from which he would go on to embezzle $5 billion USD. Forgiven? Yes. A 2009 documentary about the concert, shot in part by Albert Maysles, is supposed to be sublime.

The Real Housewives of Oppressive Regimes

13 Pop Stars Who Sang for Dictators

tv 9 mins ago
Excuse Me, Who Is This British Baking Show Hunk? Hellooo, Sandro!
divorce rumors 19 mins ago
Gisele Bündchen and Tom Brady May Be Over for Good Bündchen was spotted burning sage outside her car.
5 questions with... 2:44 p.m.
Scarlett Johansson on Her Beauty Regrets and Her Closet Full of Coats Beauty founders Scarlett Johansson and Kate Foster discuss the challenges of a “clean beauty” brand.
nope! 2:33 p.m.
Great British Bake Off’s Mexico Week Is As Bad As It Sounds You’d think contestants would know how to eat a taco — or at least how to pronounce “guacamole.”
gone sale-ing 2:26 p.m.
Here’s How to Shop Target’s Deal Days Prime Day who?
excerpt 1:00 p.m.
Dreaming to Decolonize: An Excerpt From Rest Is Resistance “To rest in a DreamSpace is a red brick through the glass window of capitalism.”
hilary swank 12:46 p.m.
Hilary Swank Is Pregnant With Twins “It’s such a blessing. It’s a total miracle. It’s unbelievable,” said the actor.
obsessive tester 12:36 p.m.
The 9 September Beauty Launches We Tried and Loved Last month was a lot.
celebrity 11:57 a.m.
Britney Spears Does Not Accept Her Mom’s Instagram Apology “I am soooo sorry for your pain,” Lynne Spears wrote in part.
power 11:56 a.m.
The Herschel Walker Campaign Keeps Getting Messier The “pro-life” candidate’s own son denounced him following reports that he’d paid for a girlfriend’s abortion.
power 10:45 a.m.
All of the Allegations Against Kevin Spacey The actor is on trial in New York for battery and intentional infliction of emotional distress.
crime 10:42 a.m.
38 People Were Killed in a Day-Care Shooting in Thailand Including more than 20 young children.
awards 10:14 a.m.
Autofiction Writer Annie Ernaux Awarded the Nobel Prize in Literature Best known for her memoir The Years.
my two cents 8:00 a.m.
‘I’m a New Parent and Our Finances Are a Mess’ You need a loose, forgiving plan that helps you feel more in control.
By Charlotte Cowles
first person 7:00 a.m.
My Childhood Under Northern Ireland’s Abortion Ban Where do its consequences begin and end?
By Rachel Connolly
rust Yesterday at 5:50 p.m.
Everything We Know About the Rust Shooting An FBI report concludes that the trigger must have been pulled.
sure why not Yesterday at 4:49 p.m.
Are Brad Pitt and Emily Ratajkowski Really Hanging Out? Rumor has it EmRata has “the vibes that Brad likes.”
soho grifter Yesterday at 4:34 p.m.
Anna Delvey Is Getting Out of Jail Having “demonstrated interest in pursuing legitimate employment in the United States,” a judge ruled.
pfw spring 2023 Yesterday at 4:26 p.m.
The T-shirt, Beloved by All, Gets a New Look By Miu Miu, nonetheless. Plus: Louis Vuitton shows a trove of great accessories.
By Cathy Horyn
what the what Yesterday at 4:16 p.m.
Carrie Is a Pigeon Lady Now Is that a real-life bird? No, it’s an $890 designer clutch.
More Stories