Sisters Laura and Kate Mulleavy, the design duo behind Rodarte, have always found unlikely inspirations for their dramatic, art-influenced and heavily referential designs. A connection to the mystical, natural side of the West Coast, mixed with the grittiness of downtown L.A., helps them reshape the definition of the California Cool Girl into an ethereal vixen equally fit for the red carpet or taking ‘shrooms in the Mojave dessert. This month, in an interview with Wilder Quarterly, the two reveal how California’s diverse landscapes — from stark, arid Death Valley to lush, hippie Big Sur — have inspired some of their collections. Photographer Todd Cole then shot some of the sisters’ favorite and most inspiring locales. Click on to see the images and read an exclusive excerpt of the interview.

What is it about the culture of California that appeals to you?

Kate Mulleavy: People still, to this day, come out West because they want to be an actor, make it big, or realize some far-out idea. People are coming out here to become something. We worship the imaginative landscape here. This mythology does exist in other places because people go to New York to make it as well. But the difference is the social structure here is more confusing because everything is made up. L.A. is a created landscape, so there isn’t the same hierarchy.

KM:  Our spring 2010 collection is based off of Death Valley and inspired by the California condor. For our collection, we were interested in the idea of a scorched landscape where there is an incredible amount of life and biodiversity. We created our own creation myth of someone spontaneously combusting to be reborn as a phoenix. It was really based off of this notion of the California condor and survival, but also heavily inspired by a trip to Death Valley. When you’re in Death Valley you feel — it doesn’t matter what your political or religious beliefs are — you feel something deeply primitive and connective. You feel something about history in the earth and how things survive and evolve.

KM: The beaches in Northern California are pretty much where we spent our childhood.

Laura Mulleavy: I like the culture that develops [around the beach] and I also like the naturalness of it. One of my favorite things as a kid was to look in tide pools. I loved that. The smell of the ocean mixing with eucalyptus is still something that conjures my entire childhood.

KM: When we go to Big Sur it feels like going home. Our connection to it is so strong because we grew up about an hour and a half from it. I think of the writers that lived there and the mythology of it. Even if we’re not that person, I think somehow, deep inside we all wish we could access something [like that] about ourselves. There’s something in all of us that — whether it’s a fantasy or strange desire to go out in the middle of the unknown and live and be free — to exist deep inside. It’s a place where the mythology of the place is as strong as the actual physicality of it.

LM: The Monterey Bay Aquarium has exhibits that show what grows deep inside the ocean. It’s just amazing because it is like looking at the most beautiful floating world of creatures and entities that you have ever seen — there’s a fragility to everything. And the colors are an incredible mix of subtle pastels and vibrant neons. I don’t think you’d ever make anything that beautiful. Big Sur has a fragility to it as well. You just feel like you want this to exist forever but you know that things evolve and change. 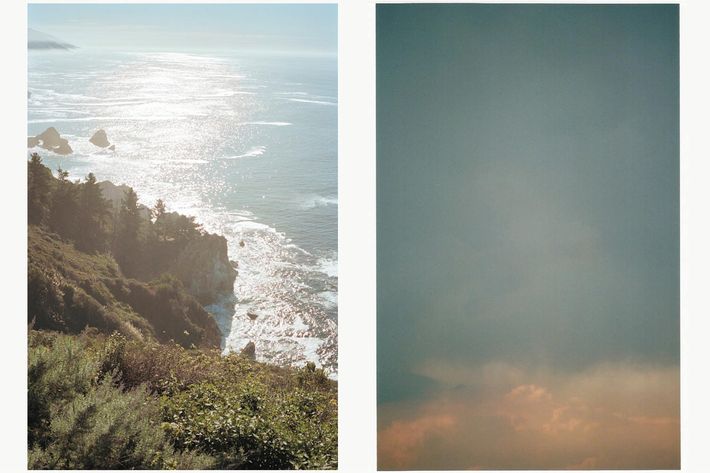 KM: The Santa Cruz Boardwalk and the beach is number one for me. It is a huge part of who we are. One of my favorite films, The Lost Boys was filmed there. It exactly captures what Santa Cruz is like growing up there. The interaction of skate, surf, poets, hardcore kids, hippies, new-agers: there isn’t another place like it. I think my true obsession with fashion comes from growing up there because I have such visceral memories of the way people dressed.

abortion 6 mins ago
Another GOP Candidate Fails to Understand Rape, Possibly Also Sex Yesli Vega claimed that rape rarely results in pregnancy because “it’s not something that’s happening organically.”
ask a boss 16 mins ago
‘The New Hires at Work Are Driving Me Up a Wall’ Clarifying for yourself what you do and don’t need to act on will help make the situation more bearable.
huh! 9:58 a.m.
Ghislaine Maxwell Reportedly Offered Yoga Lessons in Prison A letter written by a fellow detainee characterized the convicted sex offender as “genuine and kind.”
life after roe 9:30 a.m.
How to Protect Yourself When Seeking an Abortion Learn your legal risks and take control of your digital privacy.
life after roe 9:30 a.m.
Don’t Trust the DIY Abortion Advice You See on TikTok These are the risks involved.
life after roe 9:30 a.m.
How to Have a Medication Abortion Where to find the pill and what to expect.
life after roe 9:30 a.m.
The Crisis Pregnancy Center Trap And how not to fall for it.
life after roe 9:30 a.m.
How to Get Help for Your Abortion The abortion mutual-aid network getting patients the funds, travel, and child-care assistance they need.
celebrity Yesterday at 5:45 p.m.
Jodie Sweetin Won’t Let Police Brutality Stop Her From Protesting The actor spoke out about the viral video of police pushing her to the ground during an abortion-rights protest.
celebrity Yesterday at 5:11 p.m.
Machine Gun Kelly Reveals He Attempted Suicide in New Documentary He was on the phone with Megan Fox at the time.
power Yesterday at 3:50 p.m.
Everything to Know About the WNBA Star in Russian Custody After her months in detention, Brittney Griner’s trial will begin on July 1.
the bigger picture Yesterday at 3:15 p.m.
Thirty Years of Community — Not Cops or Corporations — at the Dyke March Scenes from this weekend’s anniversary march in New York City.
By Melissa Kravitz Hoeffner
jussie smollett Yesterday at 3:12 p.m.
What Was Jussie Smollett Doing at the BET Awards? The star, who was found guilty of staging a hate crime in 2019, appeared on Sunday’s red carpet.
celebrity Yesterday at 3:08 p.m.
Ireland Baldwin Opens Up About Her Abortion “I chose me, and I would choose me again.”
celebrity Yesterday at 1:34 p.m.
Ben Affleck Is Looking for Reasons to Be Stressed Why else would he let his 10-year-old son get behind the wheel of a Lamborghini?
budgeting Yesterday at 1:00 p.m.
This Wedding Season Is Going to Cost You Budgeting for someone else’s big day.
By Emma Turetsky
why? Yesterday at 12:20 p.m.
Alec Baldwin Has Taken It Upon Himself to Interview Woody Allen This seems like a bad idea, but carry on.
brooding Yesterday at 12:00 p.m.
What Even Is a Resilient Child? An unexpected Instagram exchange made me consider how growing up with social media affects kids.
bet awards Yesterday at 11:27 a.m.
Jazmine Sullivan Wants Men to Talk About Abortion Too Presenters at the BET Awards were outspoken about the loss of Roe — but the men were noticeably silent.
gone sale-ing Yesterday at 10:00 a.m.
Tatcha Lovers, It’s That Time of Year Again All its products are on sale, but today’s the last day!
More Stories