Period technology has come a long way since the first pad — complete with straps, suspenders, buckles, and a belt — made it into stores in the late nineteenth century. Meet the period app: Women are now using their smartphones to help them do everything from graphing their flows to changing their tampons on time to predicting the days on which they’ll ovulate.

What’s the point of having so much information on the exact part of womanhood most of us would happily forsake? According to users of the apps, collecting and analyzing data on periods helps them better understand their bodies as well as tackle health problems like infertility. Many of the apps that allow period tracking, such as Kindara, Clue, and Glow, are geared toward women trying to get pregnant. In addition to the dates of their periods, users record data on cervical mucus texture and body temperature that help them determine when it’s possible to conceive.

Lauren Bacon, a business coach from Vancouver and a follower of the Quantified Self movement, successfully skirted pregnancy for ten years using the analog version of period apps — a pen and paper. Then, at the age of 39, she put all of her data in an app and began analyzing it, conceiving after just two cycles of trying. (To keep her husband in the loop, Bacon added the phrase “Green light go!” to a shared Google calendar on days when she was ovulating.)

Amid their futuristic trappings, many of the period-tracking apps reinforce oddly old-school gender stereotypes. Cute graphics and comforting words are the rule. Period Plus, an app that claims more than over one million users, features a pink color scheme and a small, purple bunny that dispenses weird bits of self-help wisdom (“What other people think of you is none of your business!”). Even some of the apps that avoid pink and purple end up perpetuating the notion that periods and pregnancy are too icky to be discussed without cutesy language. Glow, for instance, which launched this month, invites users to perform tasks such as “Call your best friend!” and “Relax into Balasana — the child’s pose” for each day of their cycles. In the male counterpart version of the app, partners are encouraged to do things such as “Compliment her shoes.” 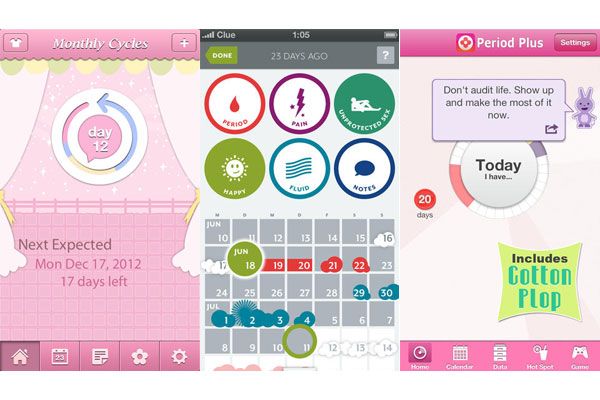 In spite of the retrograde rhetoric, though, many new period apps promise to initiate leaps of progress in women’s health using a thoroughly 21st-century concept: big data. Max Levchin, the founder of Glow and former CTO of Paypal, explained at a conference in May that he sees infertility as an “information problem” to be solved using “machine learning and predictive analytics.” Levchin is also launching a financial service that will insure couples against expensive medical treatments should they fail to conceive.

Clue founder Ida Tin hopes that her app, which also launched in July, will end up empowering more women than just its users. “Science needs the data we’re collecting to bring research forward and create better solutions for women,” she said. “There hasn’t been much innovation since the birth-control pill came out.”

The utopian mentality among fertility-app developers mirrors the general mindset of Quantified Self, the movement of people who see personal data crunching as a self-help philosophy. Since 2008, when the first meetings were held, online Quantified Self groups have attracted more than 22,000 members in 33 countries, united by their desire to use apps and gadgets like the Fitbit to help them track — or, in movement parlance, “hack” — various aspects of their health and habits. The rise of fertility and period apps is unquestionably linked to the popularity of Quantified Self. Both Clue and Glow are currently working on pieces of wearable hardware that will eventually gather data on things like body temperature automatically, effectively acting as Fitbits for fertility.

In many ways, though, cycle-tracking apps are part of a much older tradition than Quantified Self. They’re certainly not the first advancement in periods to come with a side of traditional gender roles: Throughout the twentieth century, new technologies designed to help women have more control over their bodies also reinforced the idea that periods were shameful or unsanitary. In 1940s and 1950s, brands like Kotex and Modess found great success marketing pads in packages “discreet” enough to “help keep your secret.” In The Story of Menstruation, an early sex-ed video produced by Disney in 1946, period blood is virginally white, as if the color red was somehow too scandalous to depict even in cartoon form (so notes Janice Delaney in her history of periods).

This lineage is perhaps why cycle tracking has, thus far, remained oddly separate from Quantified Self, despite their common ground. One member estimated that as much as 80 percent of the Quantified Self movement’s members are male.

“The [Quantified Self] narrative has a very strict, technologically driven idea of what the body means,” said danah boyd, a social media scholar and senior researcher for Microsoft Research. “One of the things I found about this ecosystem is that in attempting to be gender neutral it ends up being masculine.”

According to Tin — whose app contains no pink or purple — the girlishness of most cycle-tracking apps could be rooted in the fact that it’s mostly male software developers designing them. “There’s a misunderstanding about what appeals to users,” she said.

Kate Kendall, the founder of New York–based city guide the Fetch and a Quantified Selfer who tracks productivity and fitness in addition to periods, says that she hopes over time the women’s-health apps will become more “gender neutral,” like other types of tracking devices.

“Whenever I see a product that’s branded pink for women,” she said, “I start to switch off.”

Shop: Outfit of the Week